21 September 1862: “Our Reg’t was in the fight at Sharpsburg Md. last Wednesday (17th) and lost nearly 200 men killed and wounded. I escaped without a single scratch.”

Posted on 21 Sep ’12 by Biff Hollingsworth 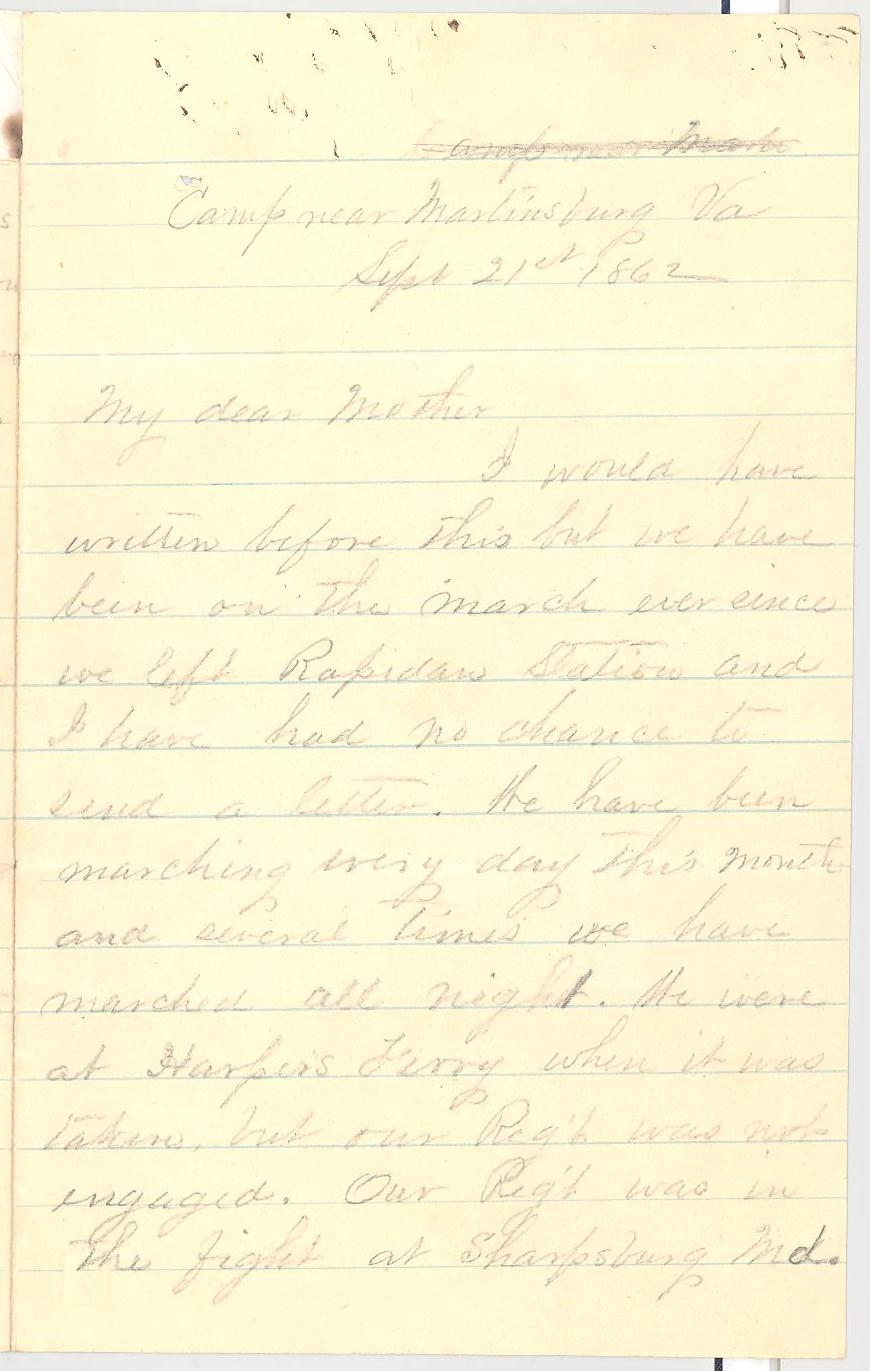 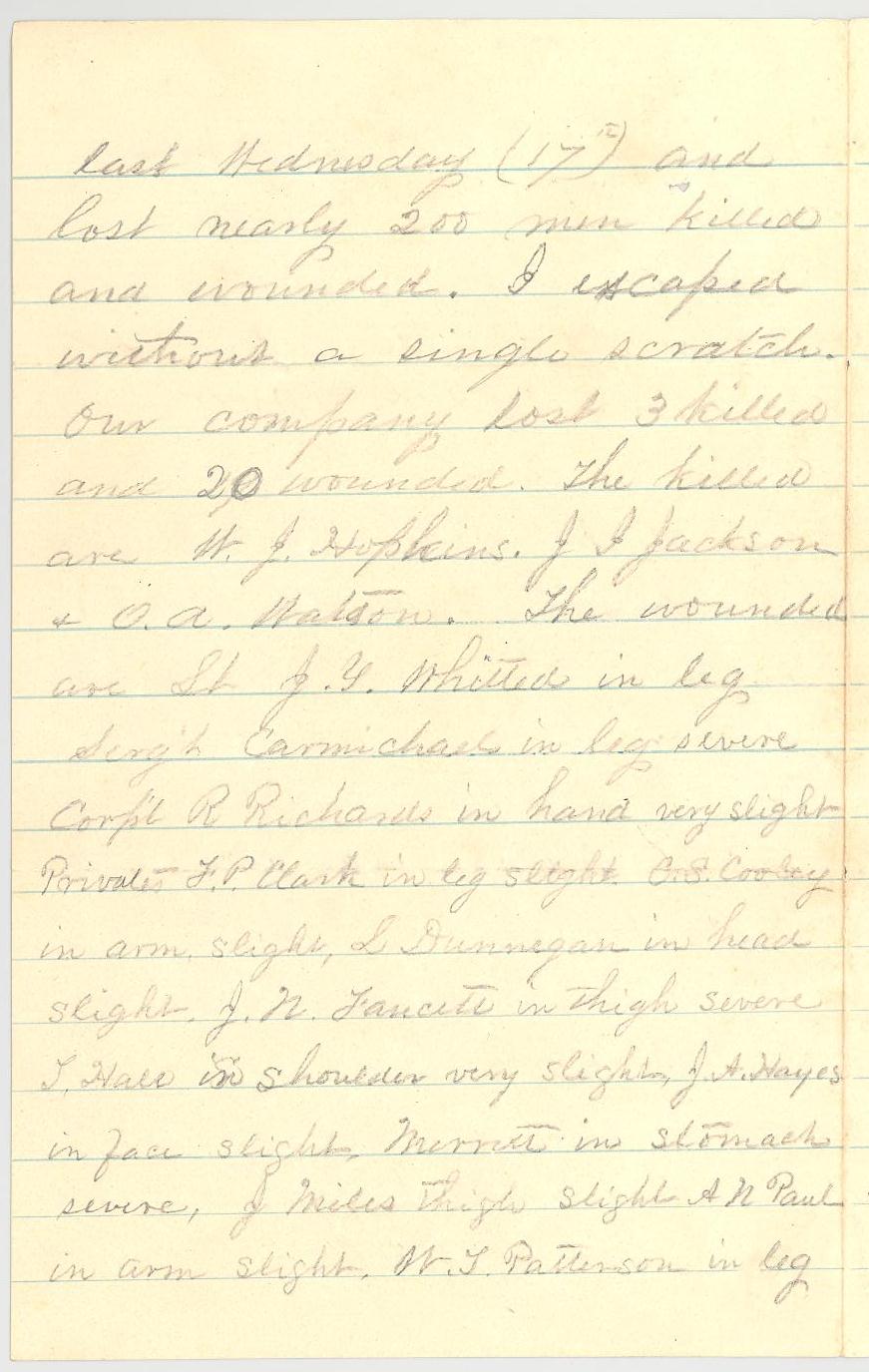 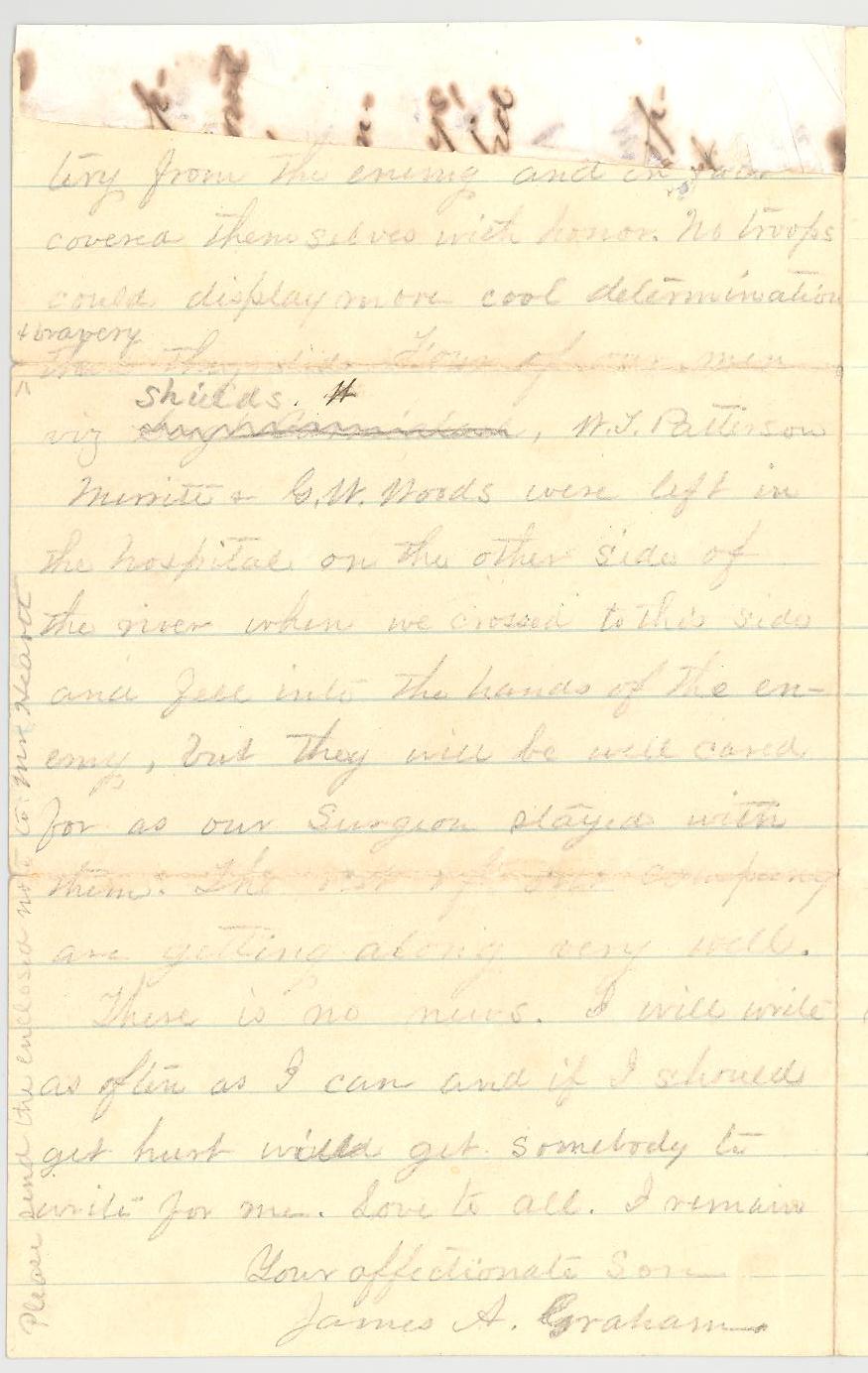 I would have written before this but we have been on the march ever since we left Rapidan Station and I have had no chance to send a letter. We have been marching every day this month and several times we have marched all night. We were at Harper’s Ferry when it was taken, but our Reg’t was not engaged. Our Reg’t was in the fight at Sharpsburg Md. last Wednesday (17th) and lost nearly 200 men killed and wounded. I escaped without a single scratch. Our company lost 3 killed and 20 wounded. The killed are W.J. Hopkins, J I Jackson, & O. A. Watson. The wounded are Lt J.Y. Whitted  in leg Serg’t Carmichael in leg severe Capt R Richards in hand very light Private F.P. Clark in leg slight C.S. Cooley in arm slight, L Dunnegan in head slight, J.N. Faucett in thigh severe L. Hall in shoulder very slight, J.A. Hayes in face slight, Merritt in stomach severe, J Miles thigh slight A N Paul in arm slight. W.T. Patterson in leg since amputated. W. T. Shields in thigh sever Sneed in foot slight. Terry in head slight, D Thompson in neck slight Walker in Arm severe J.R. Whitted in shoulder slight, G.W. Woods in both thighs very severe. J.L. Cooley is missing but I hope may yet come up safe. Lt Whitted fell into the hands of the enemy and I was in charge of the company during the remainder of the fight as Lt Dickson was sick and Capt Webb in Raleigh. It was the hottest time I ever saw and I am very thankful that I came out unhurt for I hardly thought I could escape where so many were falling. Our Reg’t took a battery from the enemy and in fact covered themselves with honor. No troops could display more cool determination & bravery than they did. Four of our men viz Shields, W.T. Patterson Merrit & G.W. Woods were left in the hospital on the other side of the river when we crossed to this side and fell into the hands of the enemy, but they will be well cared for as our Surgeon stayed with them. The rest of our company  are getting along very well.

There is no news. I will write as often as I can and if I should get hurt will get somebody to write for me. Love to all. I remain