1 October 1862: “When there we will seize the negroes at night & leave immediately with them for the mouth of the River & there set sail for the Bertie shore, & thence direct to the up-country.”

Posted on 1 Oct ’12 by Biff Hollingsworth

In the letter, William Pettigrew explains his reasons for not enlisting in the Confederate service (due to his continued health concerns). Pettigrew also describes his plan to enter Union-occupied territory in order to retrieve his slaves from Scuppernong Plantation, Tyrrell County, N.C.

In March 1862, Pettigrew had undertaken a similar plot to retake his slaves from Magnolia Plantation, Washington County, N.C. According to historian Wayne K. Durrill, in his work, “The Struggle for Black Freedom before Emancipation,” Pettigrew had arranged for 25 Confederate Cavalrymen to descend on Magnolia, capture Pettigrew’s slaves and load them into wagons, then send them, under armed guard, on a nine-day march to Haywood, a trip of nearly 180 miles. Ultimately, Haywood was too small a farm to support all of the slaves Pettigrew relocated there during this period, so he later hired the majority of his slaves out to other planters. 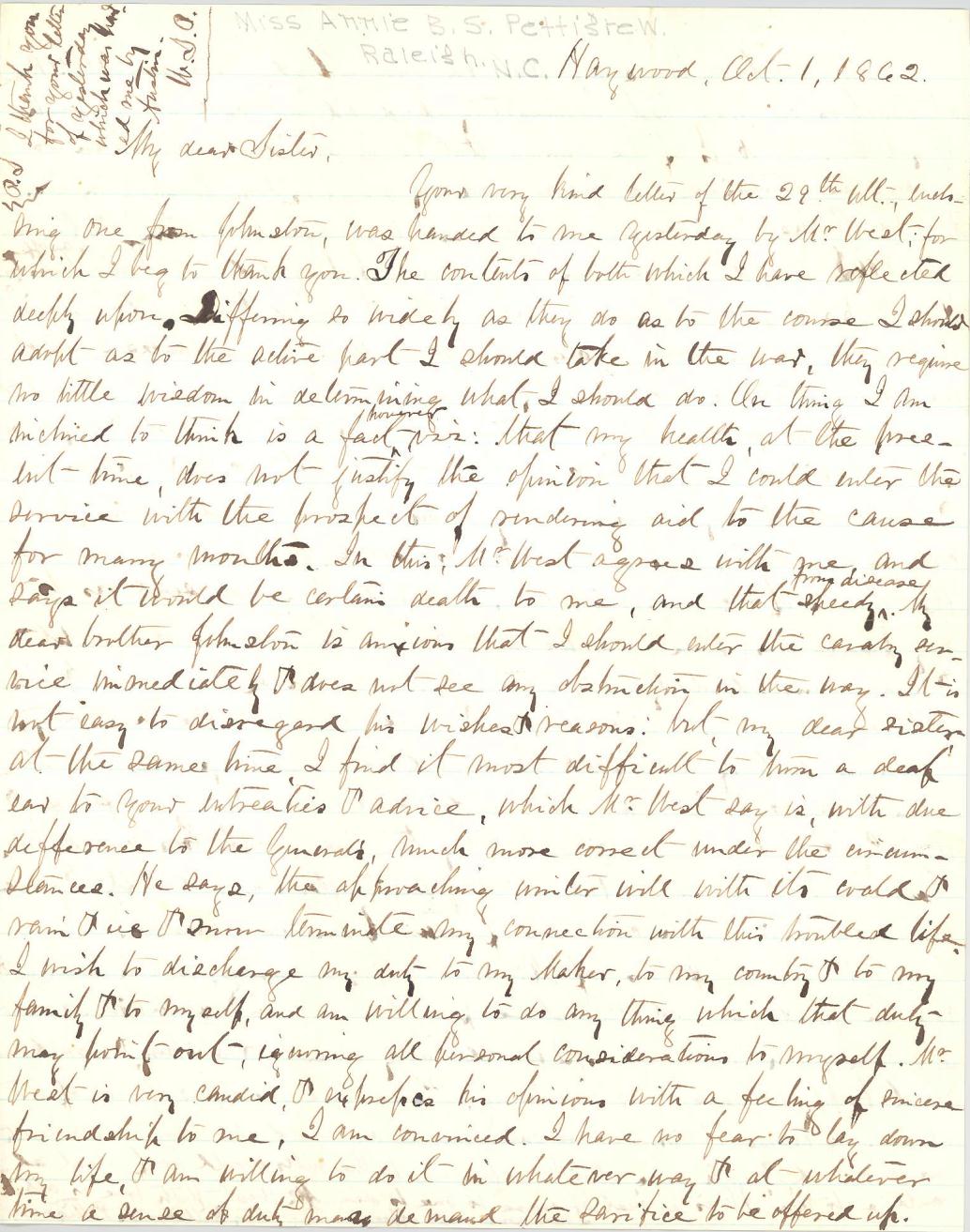 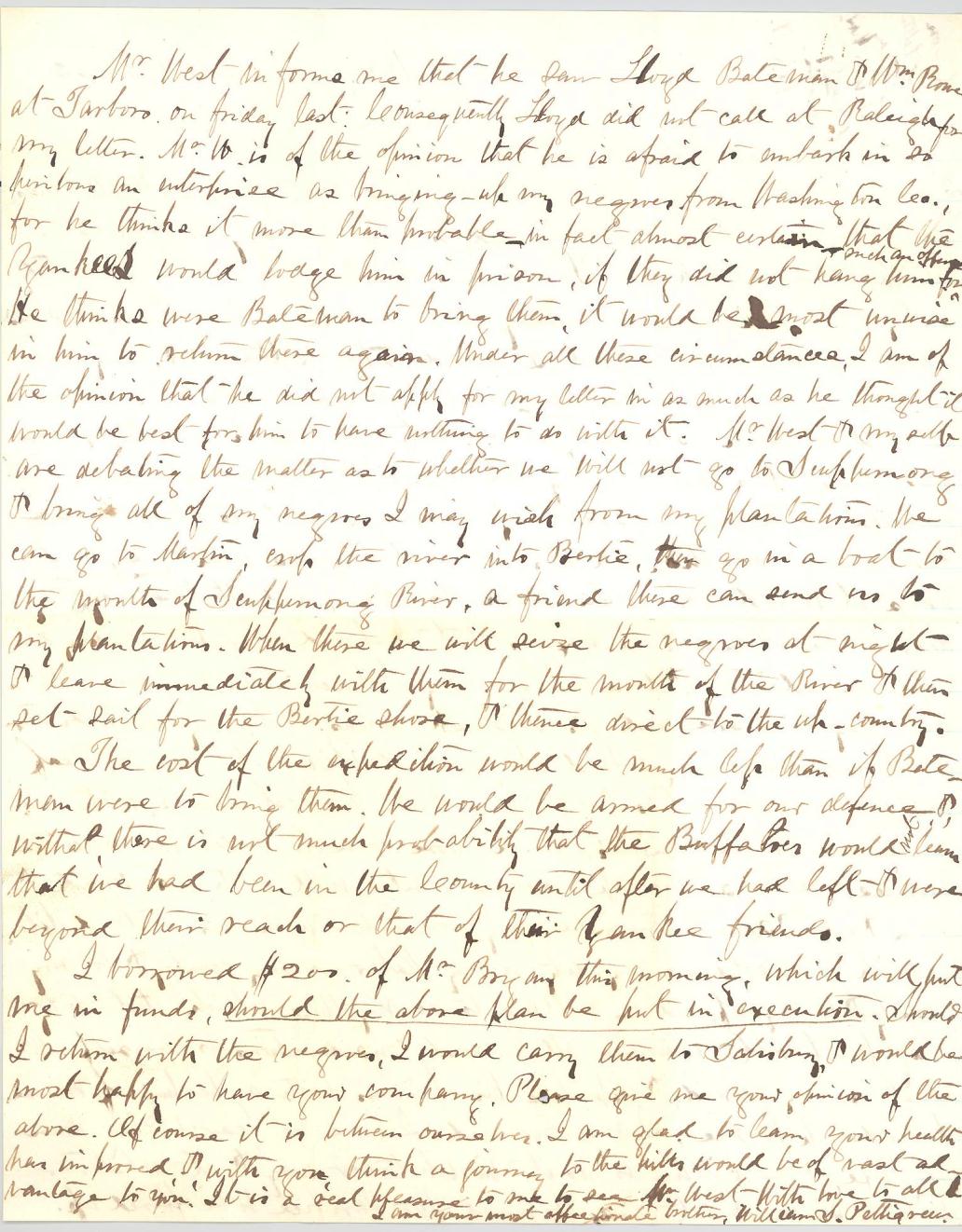 Your very kind letter of the 29th ult., enclosing one from Johnston, was handed to me yesterday by Mr. West; for which I beg to thank you. The contents of both which I have reflected deeply upon. Differing so widely as they do as to the course I should adopt as to the active part I should take in the war, they require no little wisdom in determining what I should do. [One?] thing I am inclined to think is a fact however viz: that my health, at the present time, does not justify the opinion that I could enter the service with the prospect of rendering aid to the cause for many months. In this, Mr. West agrees with me, and says it would be certain death to me, and speedy from disease. My dear brother Johnston is anxious that I should enter the cavalry service immediately & does not see any obstruction in the way. It is not easy to disregard his wishes & reasons. But, my dear sister, at the same time, I find it most difficult to turn a deaf ear to your entreaties & advice, which Mr. West says is, with due defference to the General’s, much more correct under the circumstances. He says, the approaching winter will with its cold & rain & ice & snow terminate my connection with this troubled life. I wish to discharge my duty to my Maker, to my country & to my family & to myself, and am willing to do any thing which that duty may point out, ignoring all personal considerations to myself. Mr. West is very candid & expresses his opinions with a feeling of sincere friendship to me, I am convinced. I have no fear to lay down my life & am willing to do it in whatever way & at whatever time a sense of duty may demand the sacrifice to be offered up.

Mr. West informs me that he saw Lloyd Bateman & Wm. [Rone] at Tarboro on friday last; Consequently Lloyd did not call at Raleigh for my letter. Mr. W is of the opinion that he is afraid to embark in so perilous an enterprise as bringing up my negroes from Washington Co., for he thinks it more than probable – in fact almost certain that the Yankees would lodge him in prison, if they did not hang him for such an offence. He thinks were Bateman to bring them, it would be most unwise in him to return there again. Under all these circumstances, I am of the opinion that he did not apply for my letter in as much as he thought it would be best for him to have nothing to do with it. Mr. West & myself are debating the matter as to whether we will now go to Scuppernong & bring all of my negroes I may wish from my plantations. We can go to Martin, cross the river into Bertie, then go in a boat to the mouth of Scuppernong River, a friend there can send us to my plantations. When there we will seize the negroes at night & leave immediately with them for the mouth of the River & there set sail for the Bertie shore, & thence direct to the up-country.

The cost of the expedition would be much less than if Bateman were to bring them. We would be armed for our defence & without, there is not much probability that the Buffaloes would not learn that we had been in the Country until after we had left & were beyond their reach or that of their Yankee friends.

I borrowed $200 of Mr. Bryan this morning, which will put me in funds, should the above plan be put in execution. Should I return with the negroes, I would carry them to Salisbury, & would be most happy to have your company. Please give me your opinion of the above. Of course it is between ourselves. I am glad to learn your health has improved, & with you think a journey to the hills would be of vast advantage to you. It is a real pleasure to me to see Mr. West.

With love to all. I am your most affectionate brother,
William S. Pettigrew

2 Responses to 1 October 1862: “When there we will seize the negroes at night & leave immediately with them for the mouth of the River & there set sail for the Bertie shore, & thence direct to the up-country.”