Posted on 9 Oct ’12 by Biff Hollingsworth

Item description: This letter, dated 9 October 1862, was written by James Munnerlyn to his sister, Mrs. D. S. Stocking of Charleston, S.C. Munnerlyn describes a battle with Union cavalry in the town of Frederick, Maryland. The townspeople had been cheering the Union troops and Stuart’s men were intent on “chastising” the Union cavalry in front of their supporters.

More about James Munnerlyn:
James Keen Munnerlyn, Jr., was born in Georgetown, S.C., in 1840. He served, 1860-1862, in the Palmetto Guard, 2nd South Carolina Regiment, and sometime between 15 July 1862 and 8 September 1862, he was transferred to the Georgia Hussars, Jeff Davis Legion, Stuart’s Cavalry, Army of Northern Virginia. Munnerlyn died in 1922. 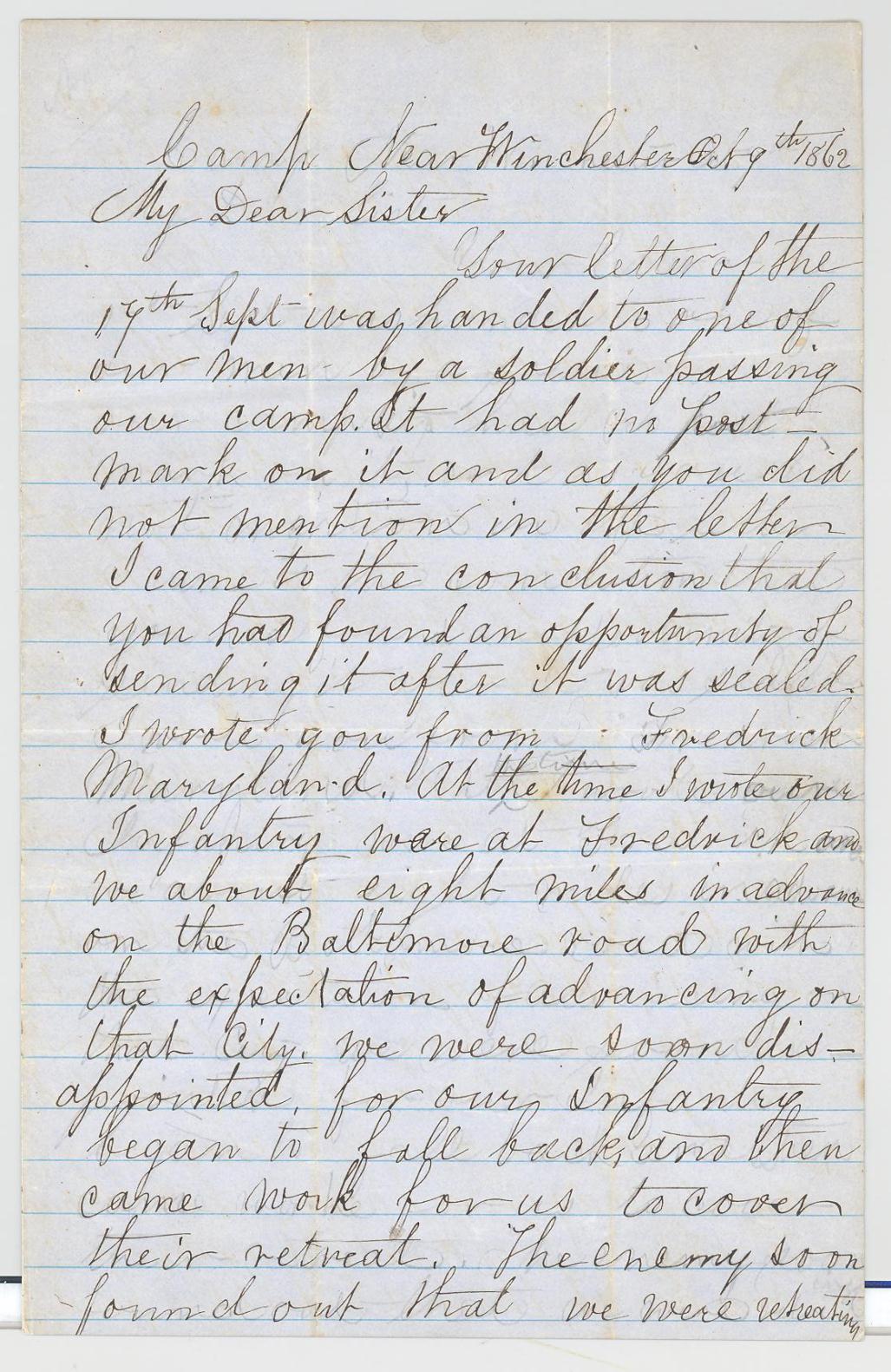 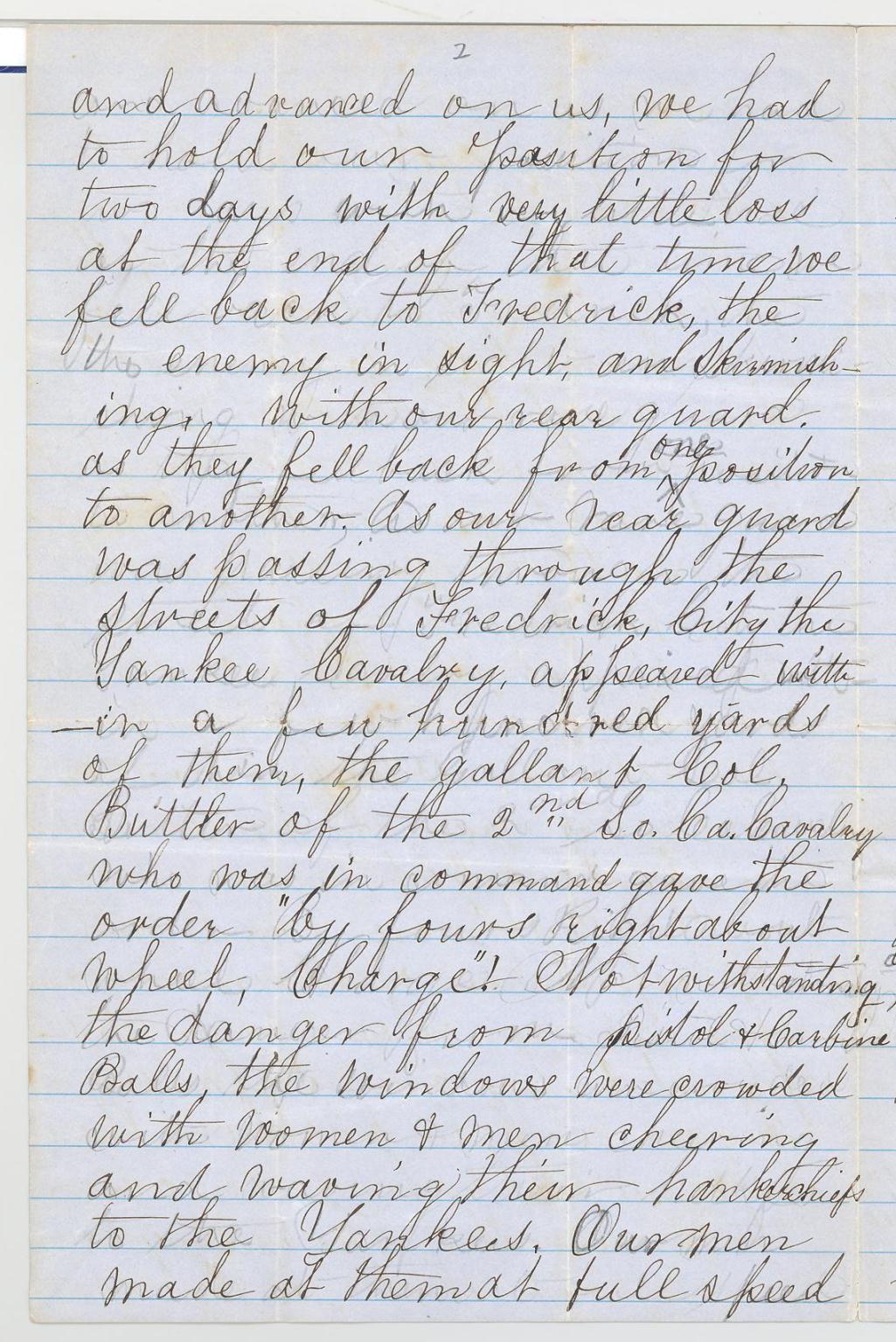 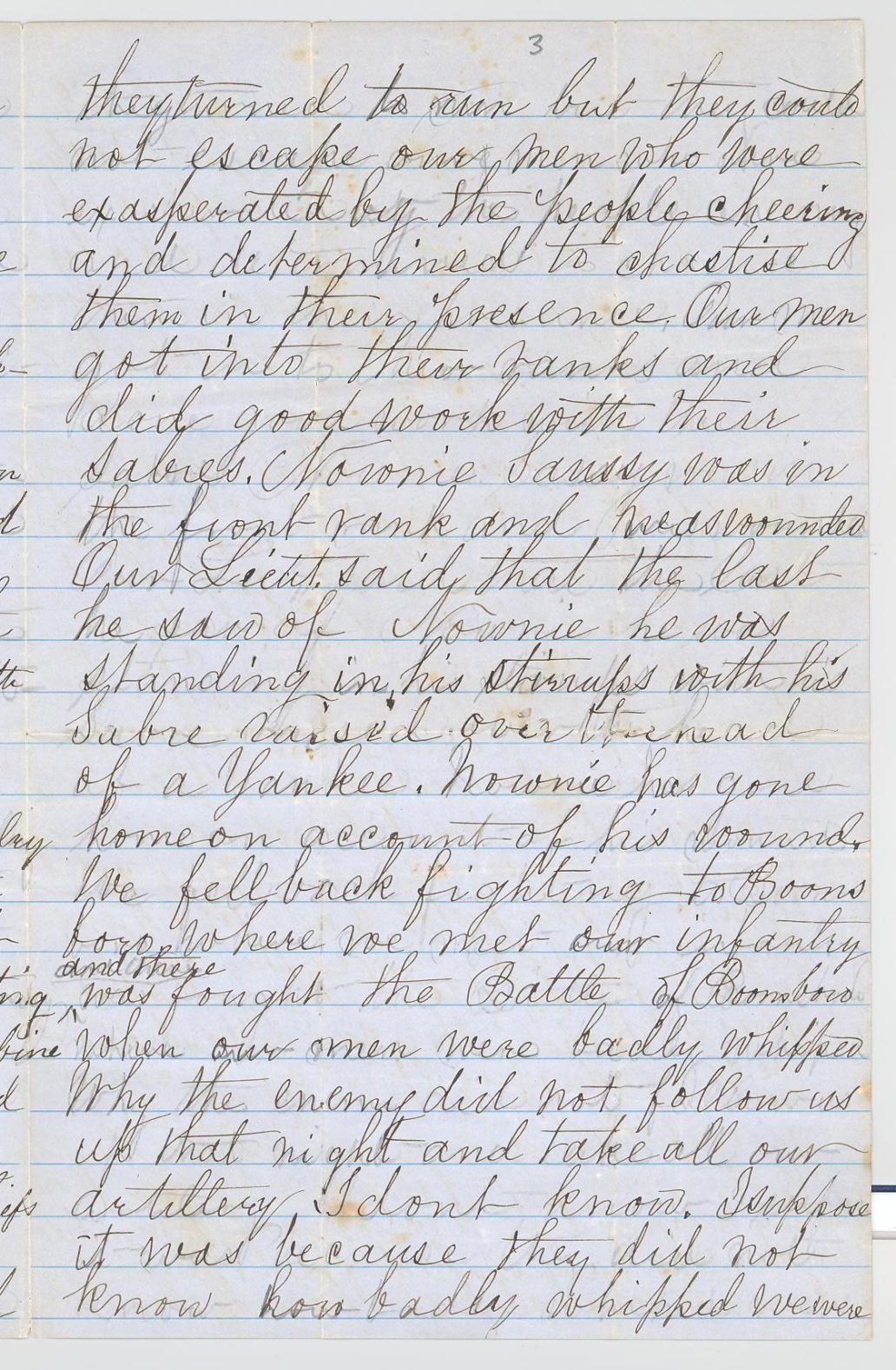 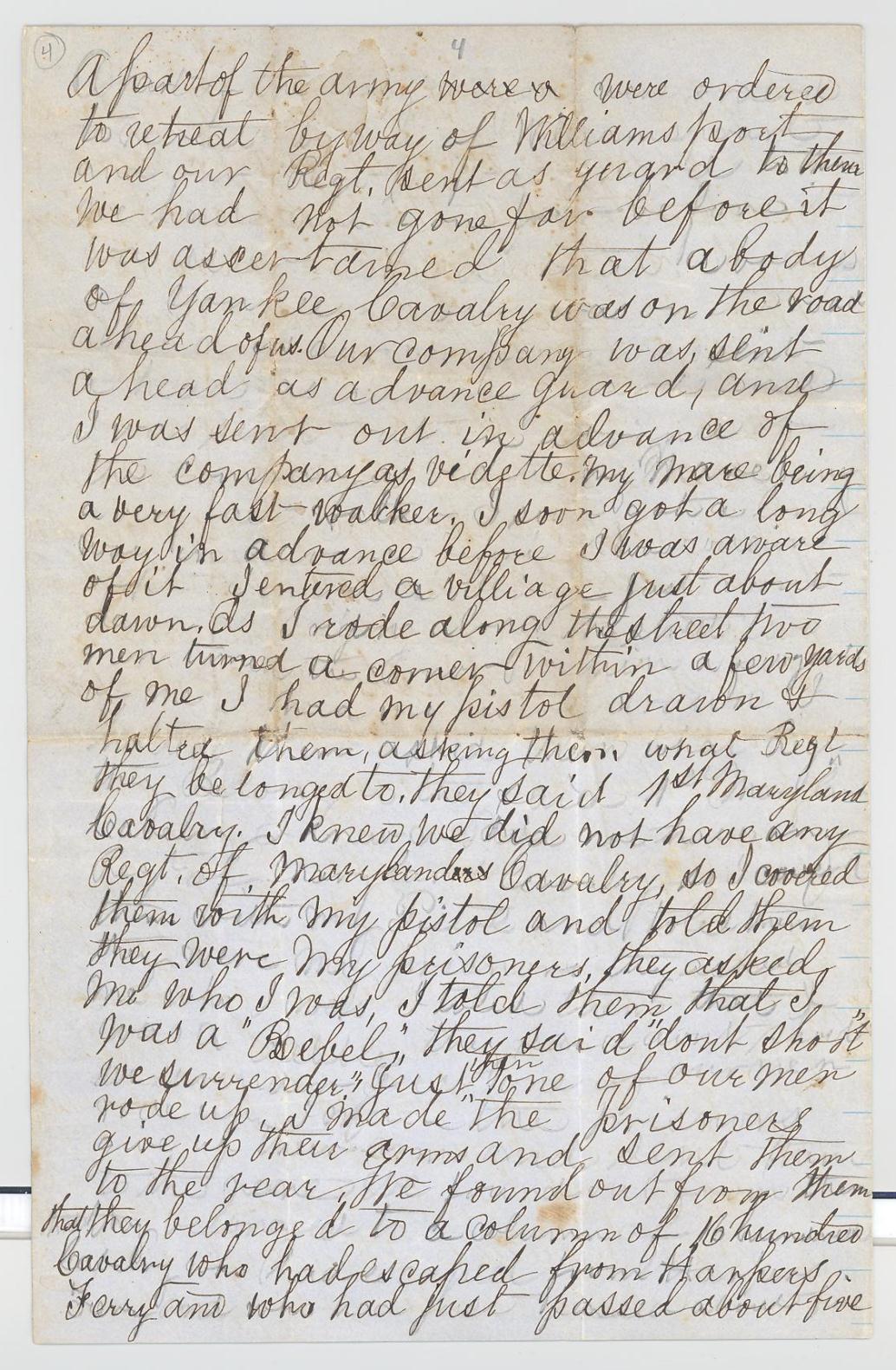 Your letter of the 19th Sept was handed to one of our men by a soldier passing our camp. It had no post-mark on it and as you did not mention in the letter I came to the conclusion that you had found an opportunity of sending it after it was sealed. I wrote you from Fredrick Maryland. At the time I wrote our Infantry were at Fredrick and we about eight miles in advance on the Baltimore road with the expectation of advancing on that City. We were soon disappointed, for our own Infantry began to fall back, and then came work for us to cover their retreat. The enemy soon found out that we were retreating and advanced on us, we had to hold our position for two days with very little loss at the end of that time we fell back to Fredrick, the the enemy in sight and skirmishing. with our rear guard as they fell back from one position to another. As our rear guard was passing through the streets of Fredrick City the Yankee Cavalry appeared within a few hundred yards of them, the gallant Col. Buttler of the 2nd So. Ca. Cavalry who was in command gave the order “by fours right about wheel, Charge”! Notwithstanding the danger from pistol & carbine Balls, the windows were crowded with women & men cheering and waving their handkerchiefs to the Yankees. Our men made at them at full speed they turned to run but they could not escape our men who were exasperated by the people cheering and determined to chastise them in their presence. Our men got into their ranks and did good work with their sabres. Nownie Saussy was in the front rank and was wounded. Our Lieut. said that the last he saw of Nownie he was standing in his stirrups with his Sabre raised over the head of a Yankee. Nownie has gone home on account of his wound. We fell back fighting to Boonsboro where we met our infantry and there was fought the Battle of Boonsboro when our men were badly whipped Why the enemy did not follow us up that night and take all our artillery I dont know. I suppose it was because they did not know how badly whipped we were. A part of the army were ordered to retreat by way of Williamsport and our Regt sent as guard to them. We had not gone far before it was ascertained that a body of Yankee Cavalry was on the road ahead of us. Our company was sent ahead as advance guard, and I was sent out in advance of the company as vidette. My mare being a very fast-walker, I soon got a long way in advance before I was aware of it I entered a village just about dawn. As I rode along the street two men turned a corner within a few yards of me I had my pistol drawn and halted them, asking them what Regt they belonged to. They said 1st Maryland Cavalry. I knew we did not have any Regt. of Maryland Cavalry, so I covered them with my pistol and told them they were my prisoners. They asked me who I was, I told them that I was a “Rebel,” they said “don’t shoot” we surrender”. Just then one of our men rode up. I made the prisoners give up their arms and sent them to the rear. We found out from them that they belonged to a column of 16 hundred Cavalry who had escaped from Harpers Ferry and who had just passed about five