10 October 1862: “She is a little fat creature, & only weighs six pounds. her eyes are very dark blue, I think they will be like yours.”

Posted on 10 Oct ’12 by Biff Hollingsworth

At the time of the letter, Kirby-Smith was commanding the Army of East Tennessee in the invasion of Kentucky. The birth of the couple’s daughter occurred the same week that Confederate forces fought in the decisive Battle of Perryville (8 October 1862) as well as Kirby-Smith’s 9 October 1862 promotion to the newly created grade lieutenant general, making him a corps commander of the Army of Tennessee. 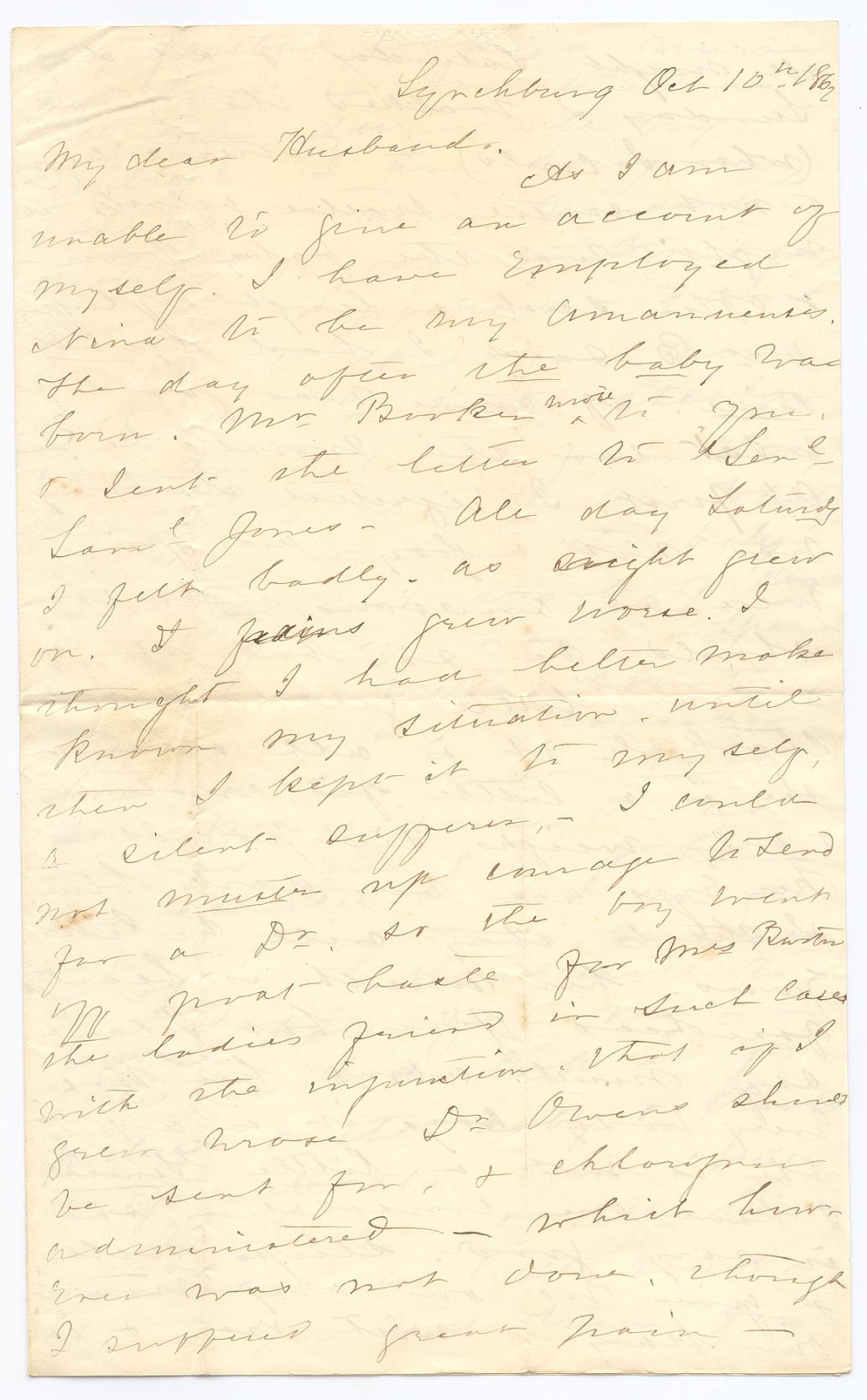 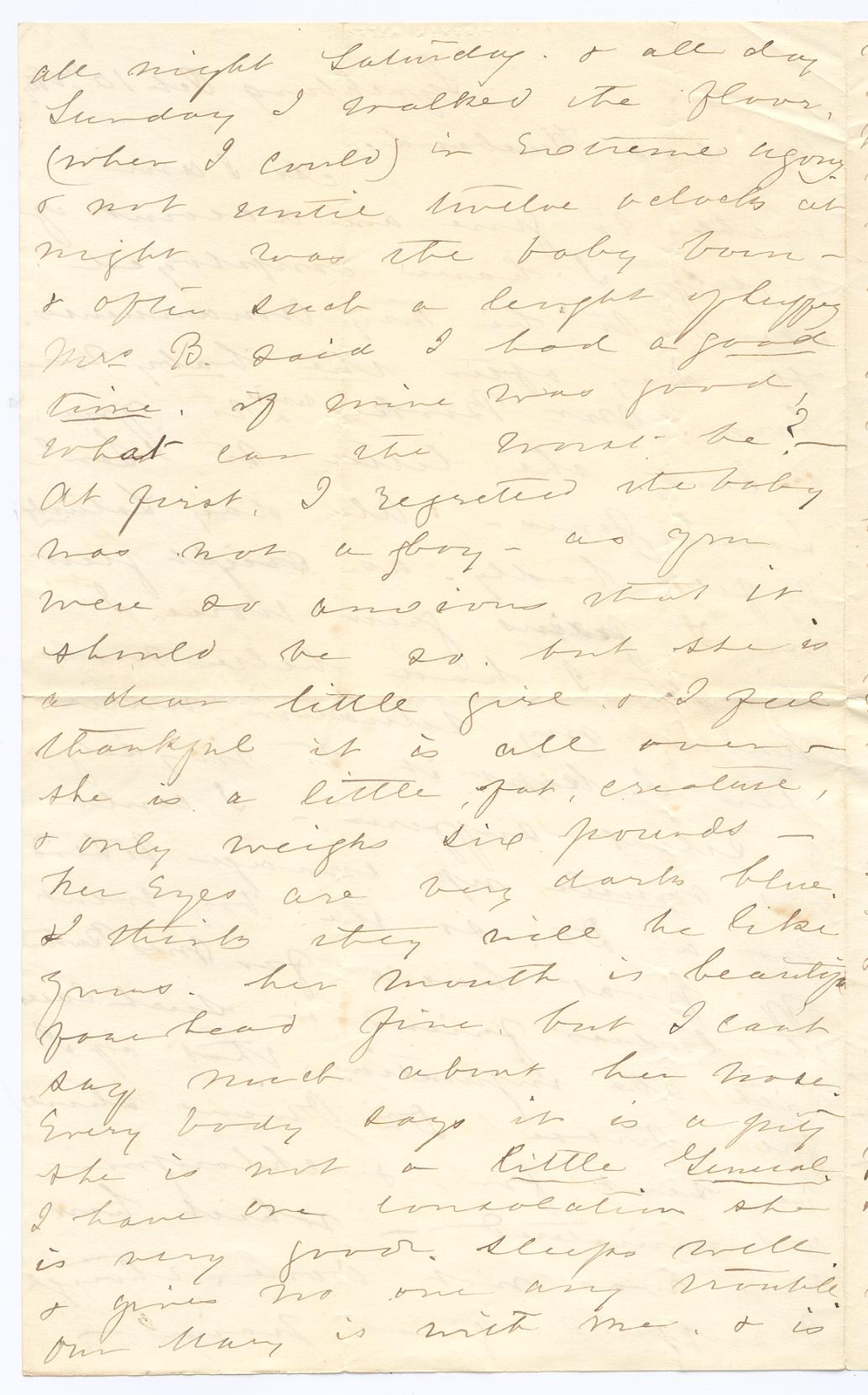 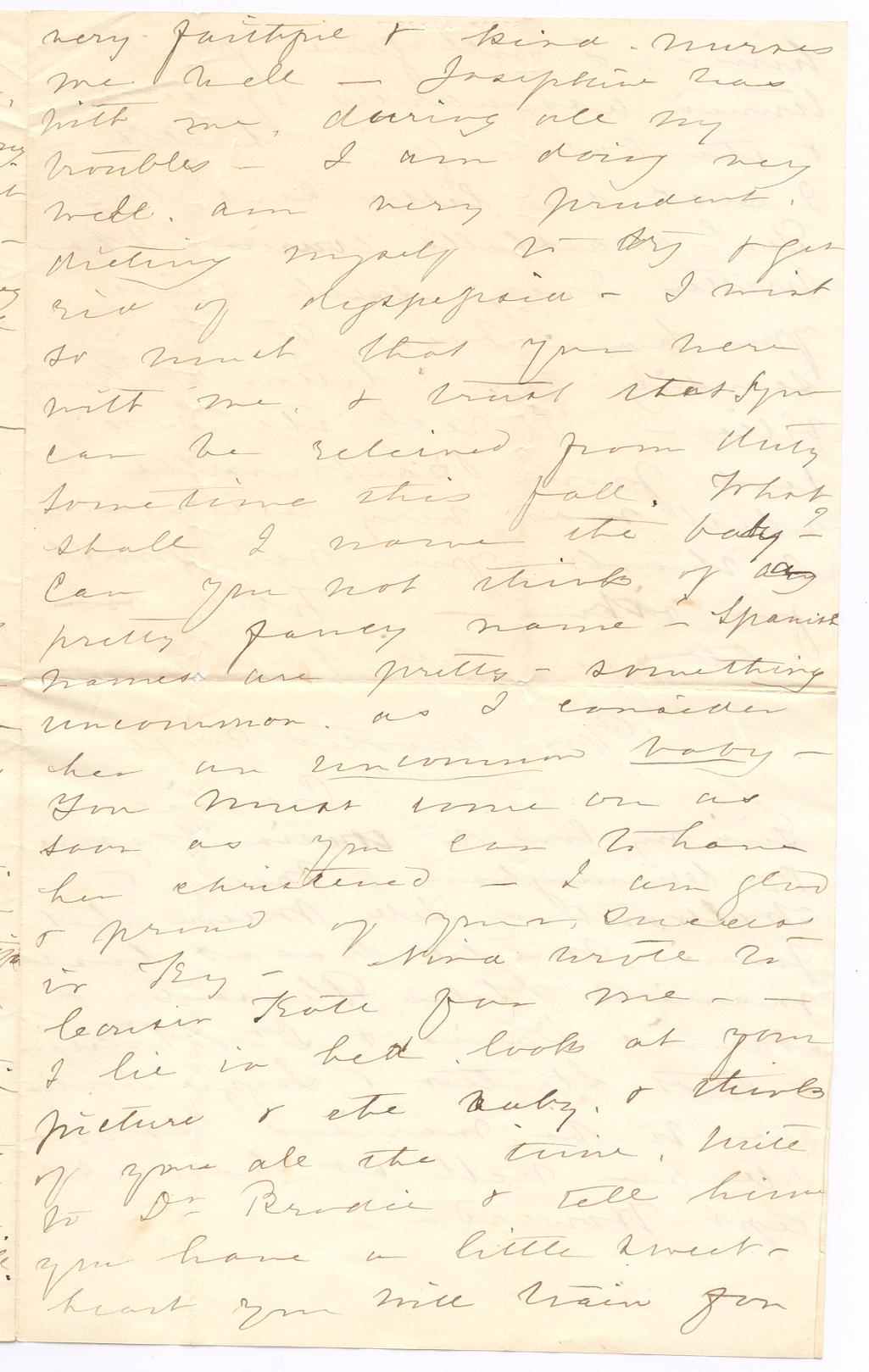 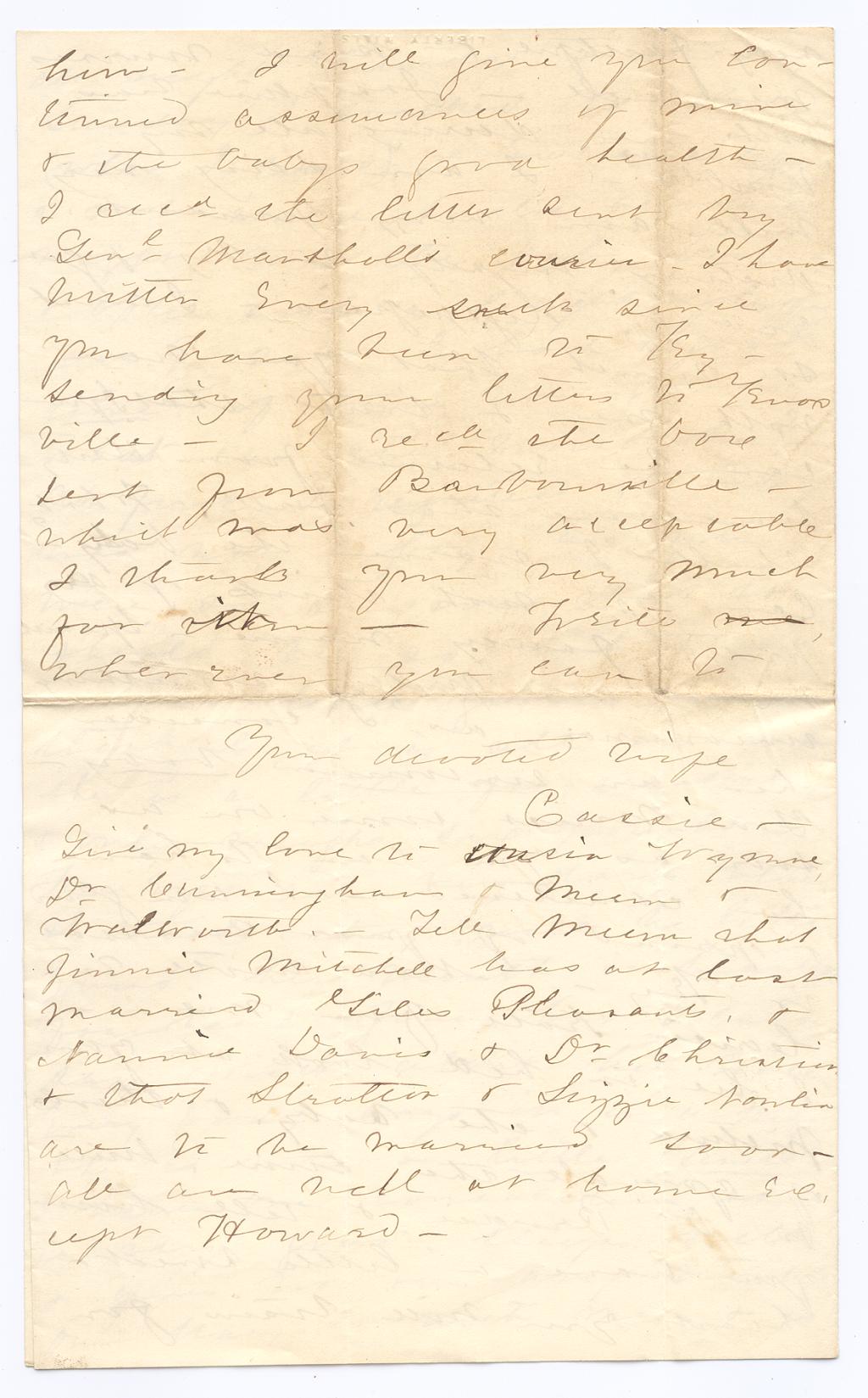 As I am unable to give an account of myself, I have employed Nina to be my amanuensis. The day after the baby was born, Mr. Booker wrote to you & sent the letter to Genl. Saml. Jones. All day Saturday I felt badly, as night grew on, I grew worse. I thought I had better make known my situation, until then I kept it to myself, a silent sufferer. I could not muster up courage to send for a Dr. so the boy went off post haste for Mrs. Burton[?] the ladies friend in such cases with the information that if I grew worse Dr. Owens should be sent for, & chloroform administered, which however was not done, though I suffered great pain all night Saturday & all day Sunday I walked the floor (when I could) in extreme agony & not until twelve oclock at night was the baby born – & after such a length [?] Mrs. B said I had a good time. if mine was good what can the worst be? At first, I regretted the baby was not a boy – as you were so anxious that it should be so, but she is a dear little girl & I feel thankful it is all over. She is a little fat creature, & only weighs six pounds. her eyes are very dark blue, I think they will be like yours. her mouth is beautiful, forehead fine. but I cant say much about her nose. Every body says it is a pity she is not a little General. I have one consolation she is very good. sleeps well & gives no one any trouble. our Mary is with me & is very faithful & kind, nurses me well. Josephine was with me, during all my troubles. I am doing very well, am very prudent, dieting myself to try & get rid of dyspepsia. I wish so much that you were with me, & trust that you can be relieved from duty sometime this fall. What shall I name the baby? Can you not think of any pretty fancy name. Spanish names are pretty – something uncommon, as I consider her an uncommon baby. You must come on as soon as you can to have her christened. I am glad & proud of your success in Ky. Nina wrote to Cousin Kate for me. I lie in bed, look at your picture & the baby, & think of you all the time. Write to Dr. [B?] & tell him you have a little sweetheart you will train for him. I will give you continued assurances of mine & the babys good health. I rec’d the letter sent by Genl. Marshall’s cousin. I have written every week since you have been in Ky., sending your letters to Knoxville. I rec’d the box sent from Barboursville, which was very acceptable. I thank you very much for it. Write me when ever you can to

Give my love to cousin [Wynne?], Dr. Cunningham & [M?] & [W?]. Tell [M?] that Jimmie Mitchell has at last married Giles Pleasants. & Nannie Davis & Dr. Christian & that [Strotter?] & Lizzie [Sonlin?] are to be married soon. All are well at home except Howard.