18 October 1862: “I am very short of Officers. I haven’t a single field or staff officer present.”

More about Isaac E. Avery:
Isaac Erwin Avery (1828-1863), the fourth son of Isaac Thomas and Harriet Erwin Avery, was born at Swan Ponds on 20 December 1828. He attended the University of North Carolina for one year in 1847, but left to manage a plantation for his father in Yancey County, N.C. He formed a partnership with Charles F. Fisher of Salisbury and Samuel McDowell Tate of Morganton to act as contractors in the building of the Western North Carolina Railroad in the mid 1850s.

Following the outbreak of the Civil War, Isaac and his brother Alphonso Calhoun Avery raised Company E in Burke County for the 6th North Carolina Regiment. Isaac commanded the company, which fought in the Battle of First Manassas and the Battle of Seven Pines. In the summer of 1862, he was promoted to colonel. He was wounded at Gaines Farm that summer and was out of action until the fall. Following the reorganization of the army after the Battle of Fredericksburg, Isaac’s regiment was placed under the command of General Robert F. Hoke, and Isaac took command of Hoke’s Brigade when the general was injured at the Battle of Chancellorsville in May 1863. On 3 July 1863, the second day of the Battle of Gettysburg, Isaac led two regiments against the Union position at Cemetery Hill. He was struck by a bullet at the base of the neck and died on the battlefield. Avery was buried in Williamsport, but, after the war, his body was moved without his family’s consent to a Confederate cemetery at an unknown location. 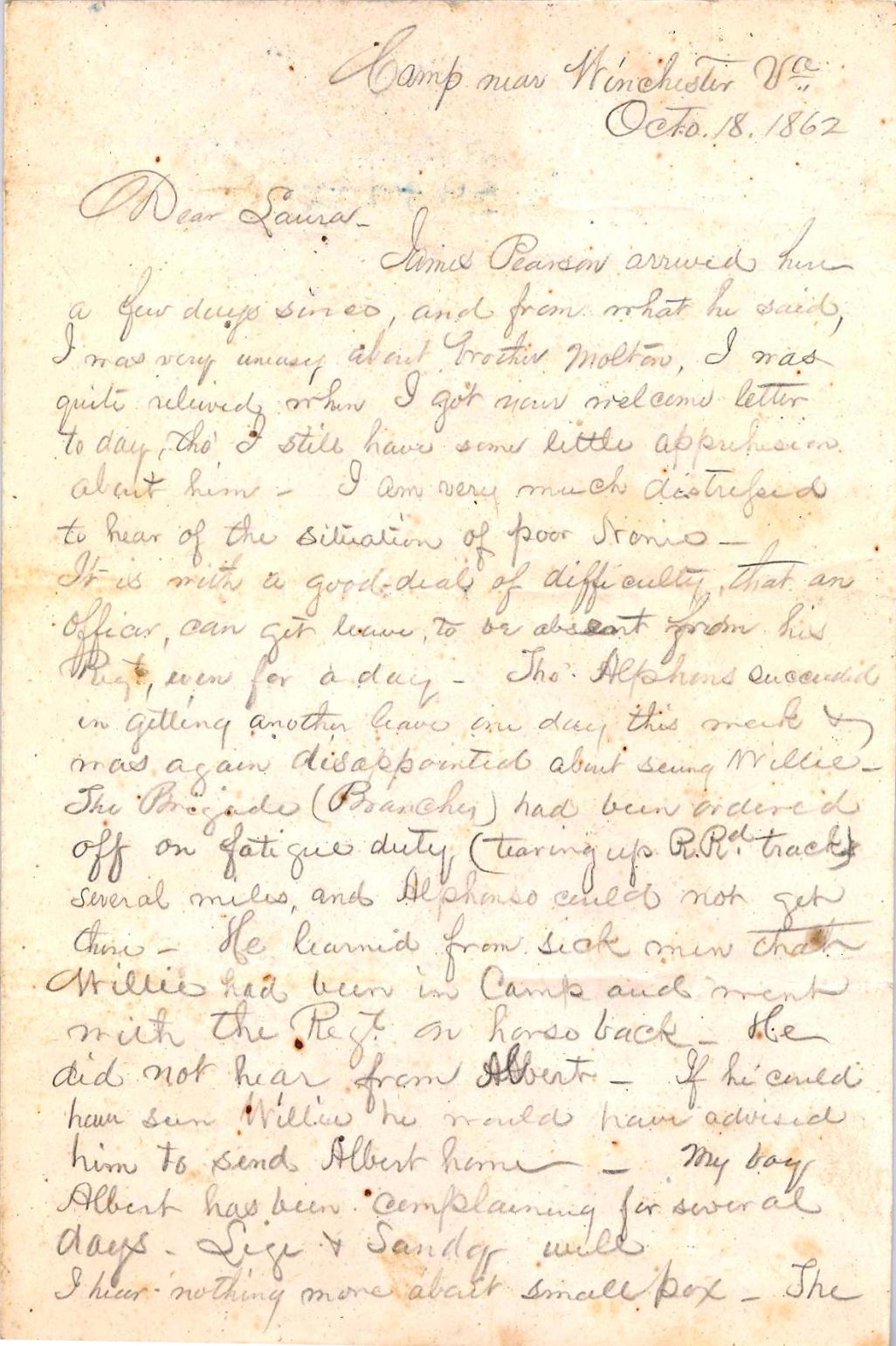 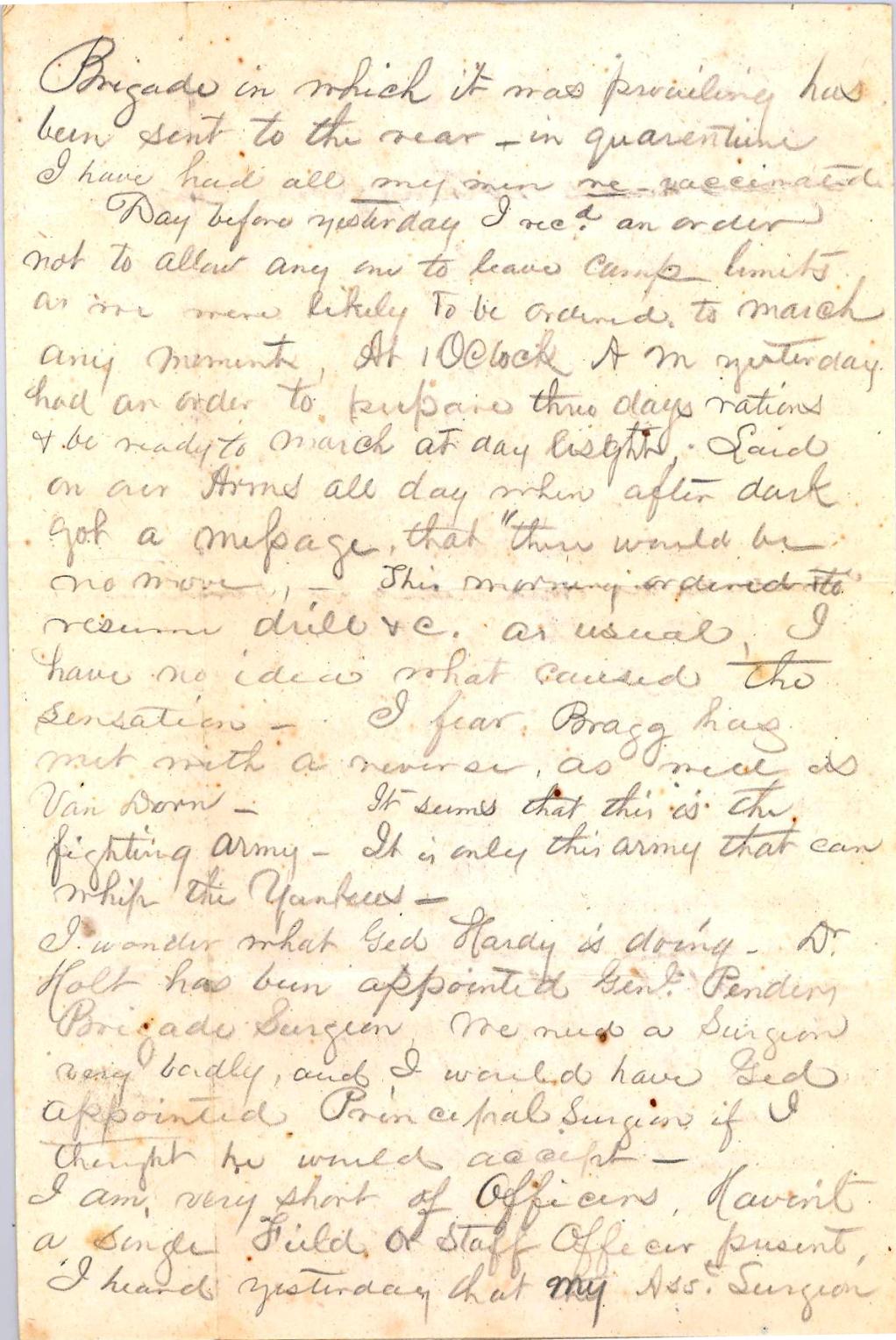 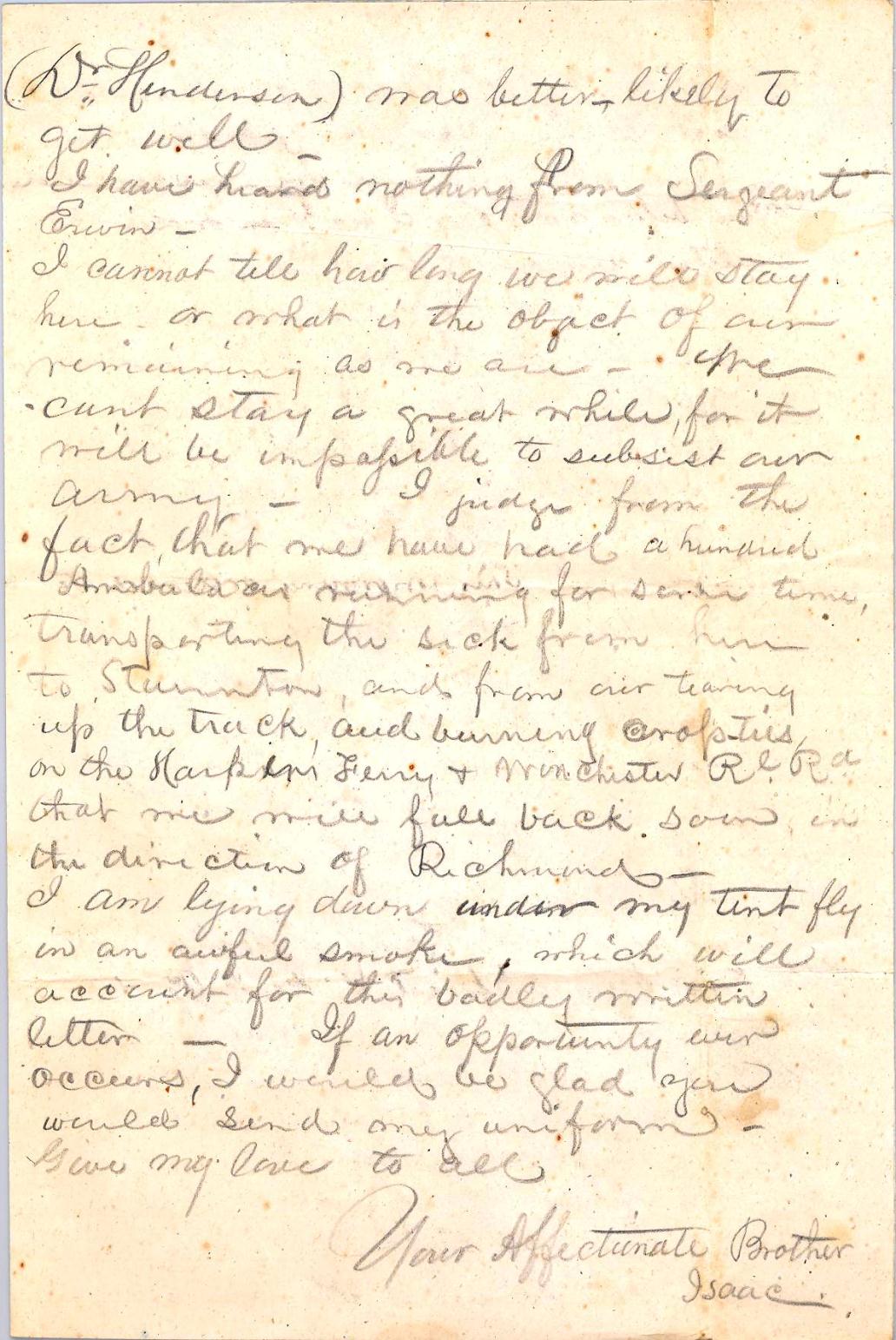 James Parsons arrived here a few days ago since and from what he said, I was very uneasy about brother Moulton. I was quite relieved when I got your welcome letter today, tho I still have some little apprehensions about him. I am very much distressed to hear of the situation of poor Nonie. It is with a good deal of difficulty that an officer can get leave to be absent from his Regt, even for a day. Thomas Alson [?] succeeded in getting another leave day this made 2. I was again disappointed about seeing Willie. Their Brigade (Branchs) had been ordered off on fatigue duty (tearing up R. Rd track) several miles and Alphonso could not get there. He learned from sick men that Willie had been in camp and went with the Regt on horse back. He did not hear from Albert. If he could have seen Willie he would have advised him to send Albert home. My boy Albert has been complaining for several days. I hear nothing more about small pox. The Brigade in which it was prevailing has been sent to the rear in quarantine. I have had all my men re-vaccinated.

Day before yesterday I recd an order not to allow any one to leave camp limits as we were likely to be ordered to march at any moment. At 1 oclock am yesterday we had an order to prepare three days rations & be ready to march at day light. Laid on our arms all day when after dark we got a message that “there would be no move.” This morning ordered to resume drill &c as usual. I have no idea what caused the sensation. I hear Bragg has met with a reverse as well as Van Dorn. It seems that this is the fighting army. It is the only army that can whip the Yankees.

I wonder what Jed Hardy is doing. Dr Holt has been appointed Genl Penders Brigade Surgeon. We need a surgeon very badly and I would have Jed appointed principal surgeon if I thought he would accept. I am very short of Officers. I haven’t a single field or staff officer present. I heard yesterday that my asst Surgeon (Dr. Henderson) was better-likely to get well. I haven’t heard nothing from Sergt Erwin.

I can not tell how long we will stay here or what is the object of our remaining as we are. We cant stay for a great while, for it will be impossible to subsist our army. I judge from the fact that we have had a hundred ambulances running for some time transporting the sick from here to Staunton, and from out tearing up the track and burning the cross ties on the Harper’s Ferry and Winchester Rl Rd, that we will fall back soon in the direction of Richmond.

I am laying down under my tent in an awful smoke, which will account for the badly written letter. If an opportunity ever occurs, I would be glad if you would send my uniform. Give my love to all