25 October 1862: “On board these two steamers are three thousand soldiers with arms and accoutrements. We are the same as defenceless.”

Posted on 25 Oct ’12 by Biff Hollingsworth

Item description: Published letter, dated 25 October 1862, written by Corporal Zenas T. Haines, Company D, 44th Massachusetts Infantry Regiment. The letter is an excerpt from Haines’ account, Letters from the Forty-Fourth Regiment M.V.M.: A Record of the Experience of a Nine Months’ Regiment in the Department of North Carolina in 1862-3 (published in Boston in 1863). Haines’ description offers a nice parallel account to that of fellow 44th Mass. soldier, John Jasper Wyeth, of Company E (please see the 24 October 1862 post). 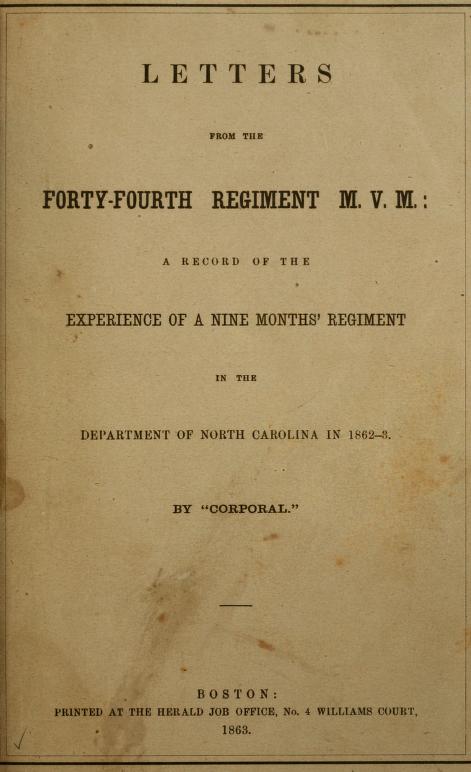 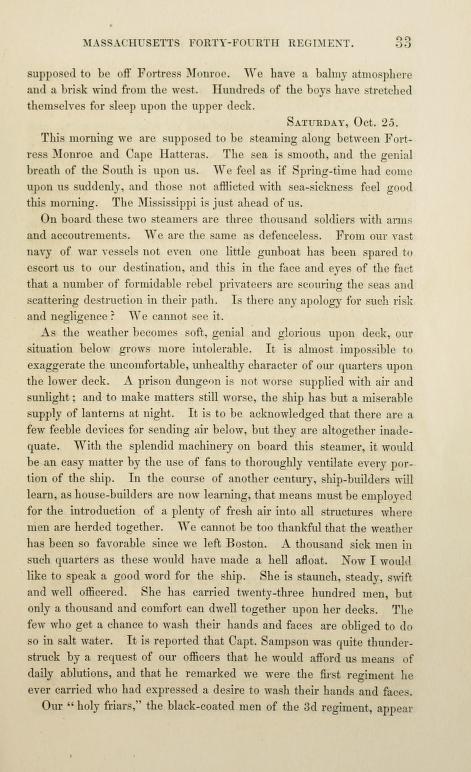 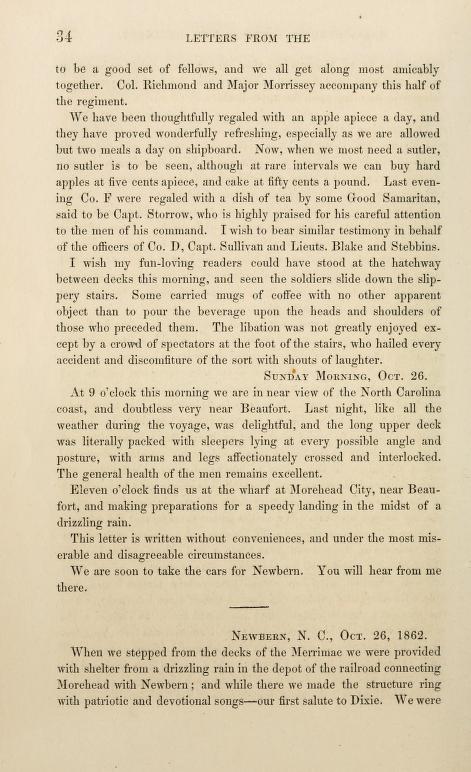 Item citation: From, Letters from the Forty-Fourth Regiment M.V.M.: A Record of the Experience of a Nine Months’ Regiment in the Department of North Carolina in 1862-3, by Zenas T. Haines, Boston: Printed at the Herald Job Office, 1863. Catalog Number: C970.742 H15, North Carolina Collection, University of North Carolina at Chapel Hill.

This morning we are supposed to be steaming along between Fortress Monroe and Cape Hatteras. The sea is smooth, and the genial breath of the South is upon us. We feel as if Spring-time had come upon us suddenly, and those not afflicted with sea-sickness feel good this morning. The Mississippi is just ahead of us.

On board these two steamers are three thousand soldiers with arms and accoutrements. We are the same as defenceless. From our vast navy of war vessels not even one little gunboat has been spared to escort us to our destination, and this in the face and eyes of the fact that a number of formidable rebel privateers are scouring the seas and scattering destruction in their path. Is there any apology for such risk and negligence? We cannot see it.

As the weather becomes soft, genial and glorious upon deck, our situation below grows more intolerable. It is almost impossible to exaggerate the uncomfortable, unhealthy character of our quarters upon the lower deck. A prison dungeon is not worse supplied with air and sunlight; and to make matters still worse, the ship has but a miserable supply of lanterns at night. It is to be acknowledged that there are a few feeble devices for sending air below, but they are altogether inadequate. With the splendid machinery on board this steamer, it would be an easy matter by the use of fans to thoroughly ventilate every portion of the ship. In the course of another century, ship-builders will learn, as house-builders are now learning, that means must be employed for the introduction of a plenty of fresh air into all structures where men are herded together. We cannot be too thankful that the weather has been so favorable since we left Boston. A thousand sick men in such quarters as these would have made a hell afloat. Now I would like to speak a good word for the ship. She is staunch, steady, swift and well officered. She has carried twenty-three hundred men, but only a thousand and comfort can dwell together upon her decks. The few who get a chance to wash their hands and faces are obliged to do so in salt water. It is reported that Capt. Sampson was quite thunder-struck by a request of our officers that he would afford us means of daily ablutions, and that he remarked we were the first regiment he ever carried who had expressed a desire to wash their hands and faces.

Our “holy friars,” the black-coated men of the 3d regiment, appear to be a good set of fellows, and we all get along most amicably together. Col. Richmond and Major Morrissey accompany this half of the regiment.

We have been thoughtfully regaled with an apple apiece a day, and they have proved wonderfully refreshing, especially as we are allowed but two meals a day on shipboard. Now, when we most need a sutler, no sutler is to be seen, although at rare intervals we can buy hard apples at five cents apiece, and cake at fifty cents a pound. Last evening Co. F were regaled with a dish of tea by some Good Samaritan, said to be Capt. Storrow, who is highly praised for his careful attention to the men of his command. I wish to bear similar testimony in behalf of the officers of Co. D, Capt. Sullivan and Lieuts. Blake and Stebbins.

I wish my fun-loving readers could have stood at the hatchway between decks this morning, and seen the soldiers slide down the slippery stairs. Some carried mugs of coffee with no other apparent object than to pour the beverage upon the heads and shoulders of those who preceded them. The libation was not greatly enjoyed except by a crowd of spectators at the foot of the stairs, who hailed every accident and discomfiture of the sort with shouts of laughter.