3 November 1862: “the nights are colder here on the border of the Dismal Swamp than they are at the north…”

Stephen Tippet Andrews enlisted in the 85th New York Infantry Regiment on 26 August 1861. He helped organize Company F, and was mustered in as first sergeant of the company in the second half of 1861. 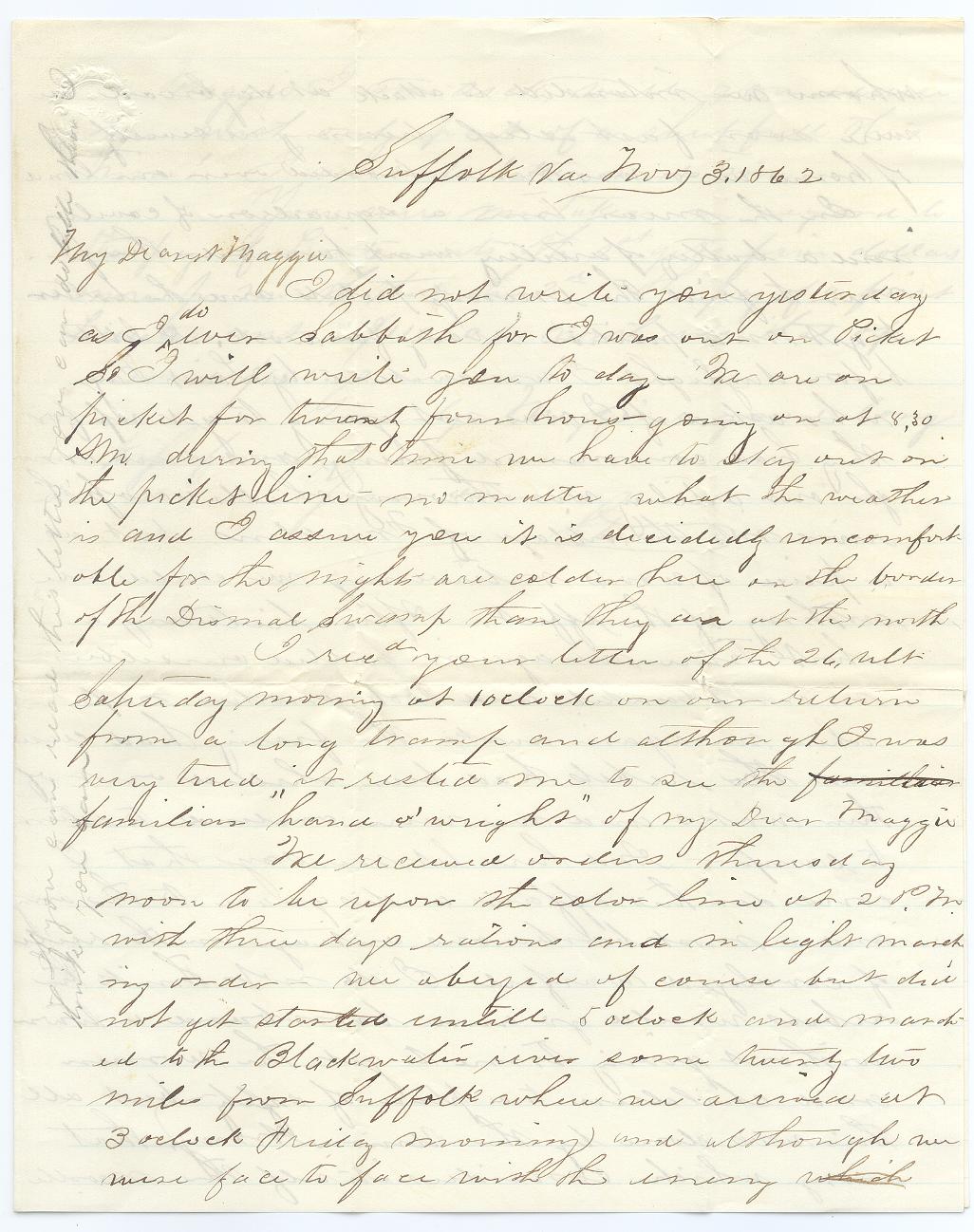 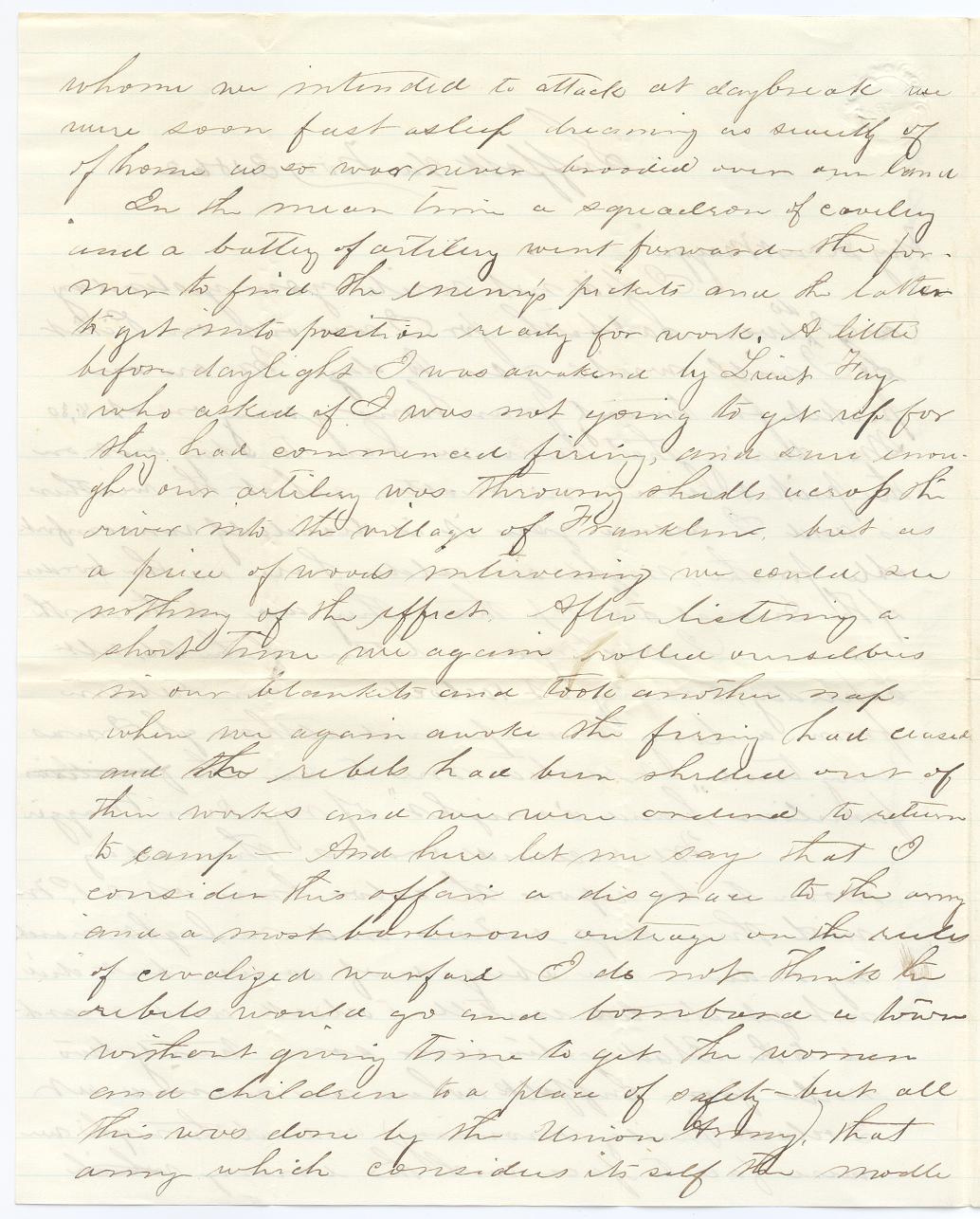 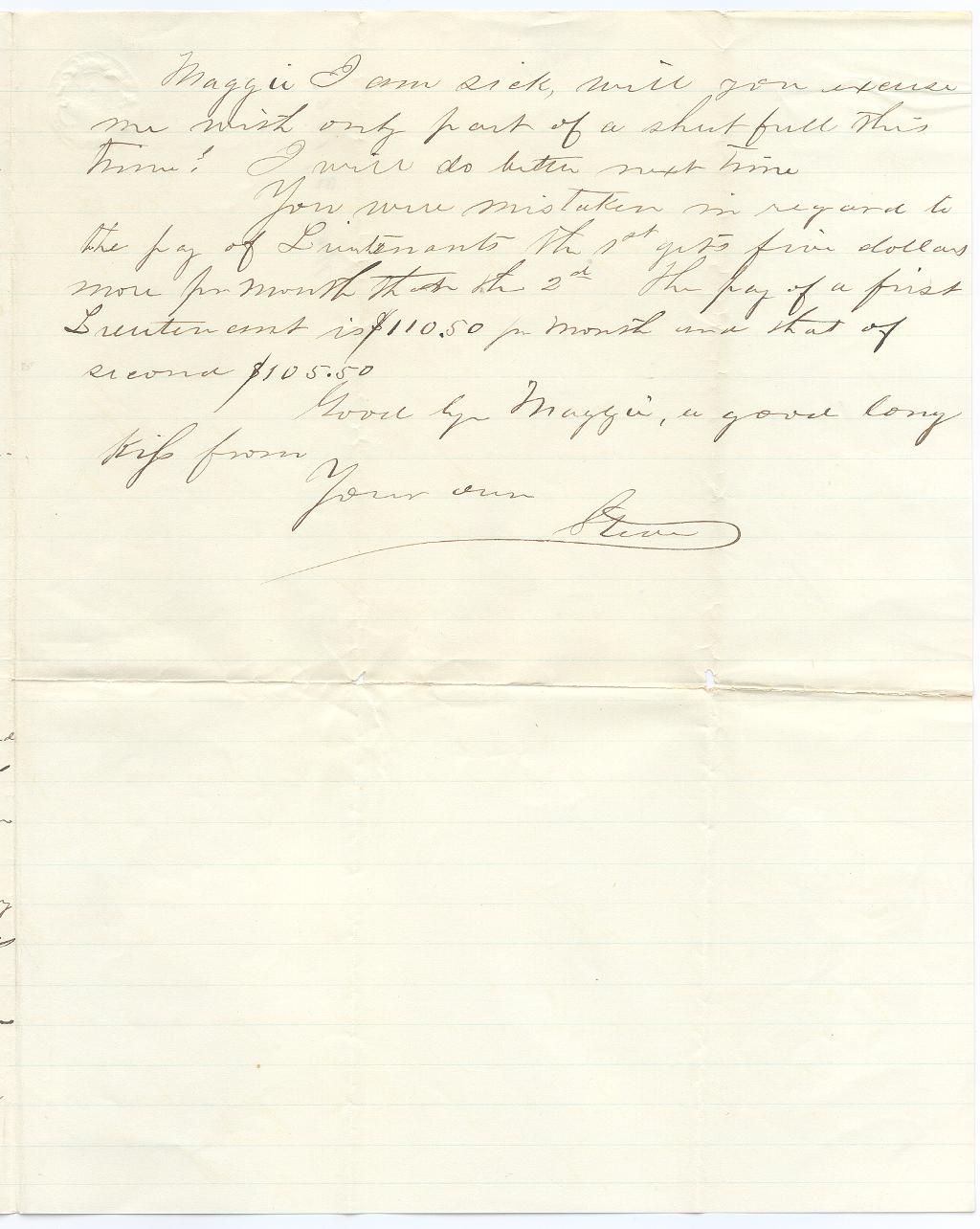 I did not write you yesterday as I do ever(y) Sabbath for I was out on Picket So I will write you today – We are on picket for twenty four hours – going on at 8:30 A.M. During that time we have to stay out on the picket line – no matter what the weather is and I assure you it is decidedly uncomfortable for the nights are colder here on the border of the Dismal Swamp than they are at the north.

I rec’d your letter of the 26, relt (?) Saturday morning at 1 oclock on our return from a long tramp and although I was very tired, it rested me to see the familiar “hand o’ wright” of my Dear Maggie

We Received orders Thursday noon to be upon the color line at 2 P.M. with three days rations and in light marching order – we obeyed of course but did not get started untill (sic) 5 oclock and marched to the Blackwater river some twenty two miles from Suffolk where we arrived at 3 oclock Friday morning and though we were face to face with the enemy whom we intended to attack at daybreak we were soon fast asleep dreaming as sweetly of home as so war never brooded over our land

In the meantime a squadron of caverly (sic) and a battery of artilery (sic) went forward – the for-men (sic) to find the enemy’s pickets and the latter to get into position ready for work. A little before daylight I was awakened by Lieut Fay who asked if I was not going to get up for they had commenced firing, and sure enough our artilery (sic) was throwing shells across the river into the village of Franklin, but as a piece of woods intervening we could see nothing of the effect. After Listening a short time we again rolled ourselves in our blankets and took another nap when we again awoke the firing had ceased and the rebels had been shelled our of their works and we were ordered to return to camp – And here let me say that I consider this affair a disgrace to the army and a most barberous (sic) outrage on the rules of civalized (sic) warfare I do not think the rebels would go and bombard a town without giving time to get the women and children to a place of safety – but all this was done by the Union Army, that army which considers itself the modle (sic)

Maggie I am sick, will you excuse me with only part of a sheet full this time? I will do better next time

You were mistaken in regard to the pay of Lieutenants the 1st gets five dollars more per month than the 2nd The pay of a first Lieutenant is $110.50 per month and that of a second is $105.50

Editor’s Note: Line written along edge of the letter “if you can read this letter you can do better than I think you can”