6 November 1862: “Press is a faithful servant to me considering the chances he has. I am satisfied with him.”

Posted on 6 Nov ’12 by Biff Hollingsworth

Item description: Letter, 6 November 1862, from Ruffin Thomson, 18th Mississippi Infantry Regiment, to his “Pa” (William H. Thomson). Thomson reports on the status of his regiment following the Battle of Antietam (Sharpsburg). He also mentions his satisfaction with his body servant, Preston (“Press”), a slave who was sent by Thomson’s father to serve him on the battlefront. 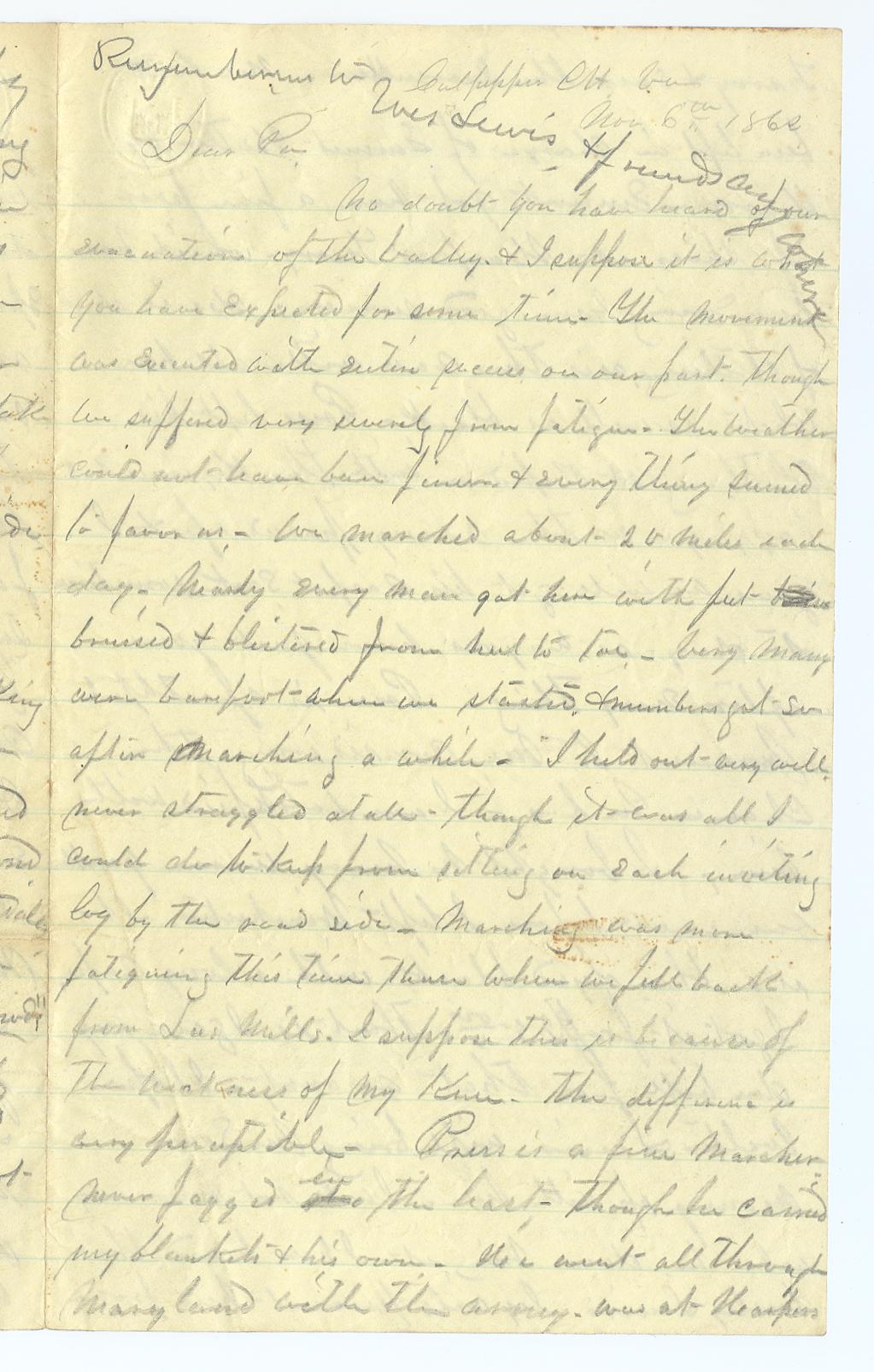 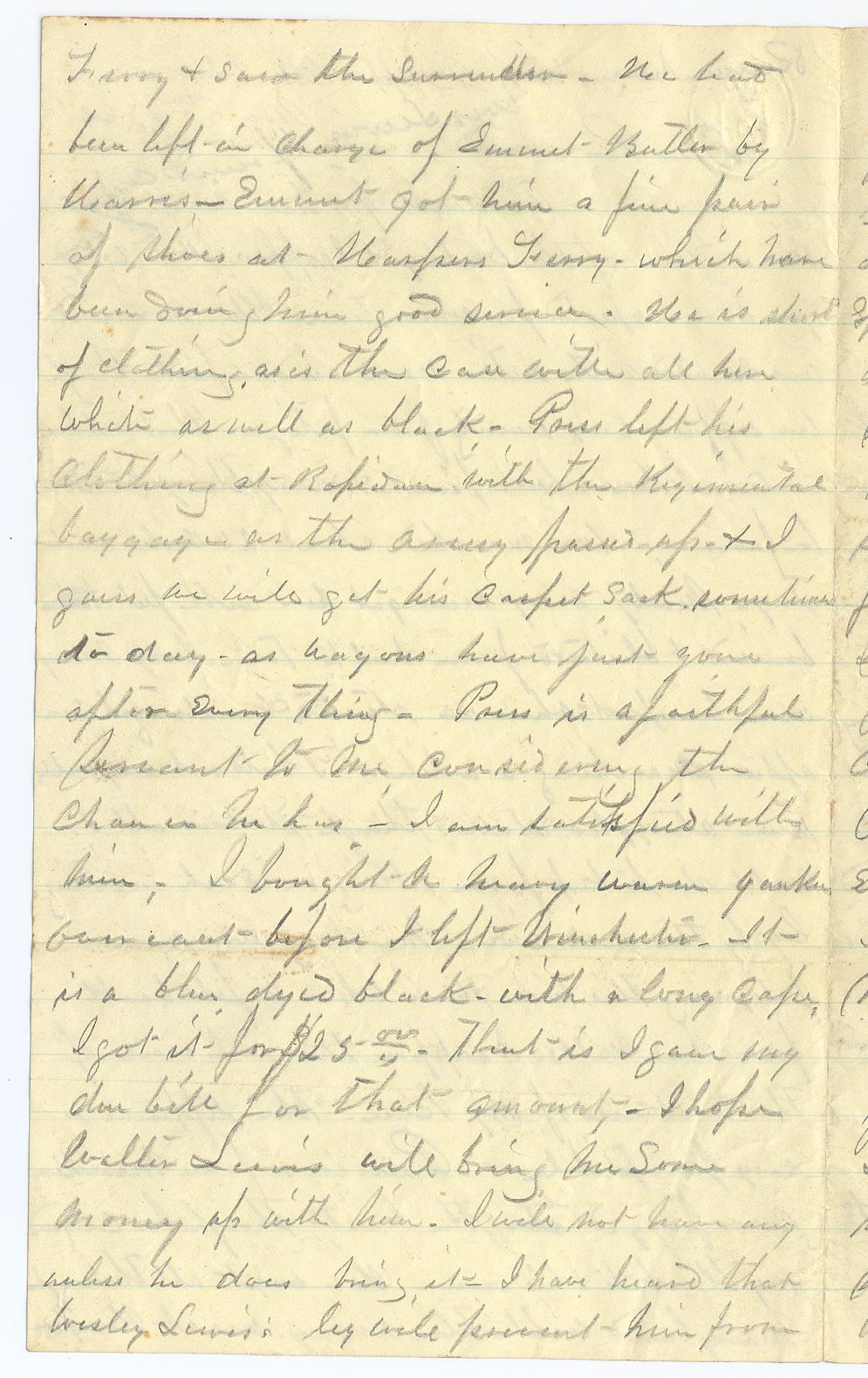 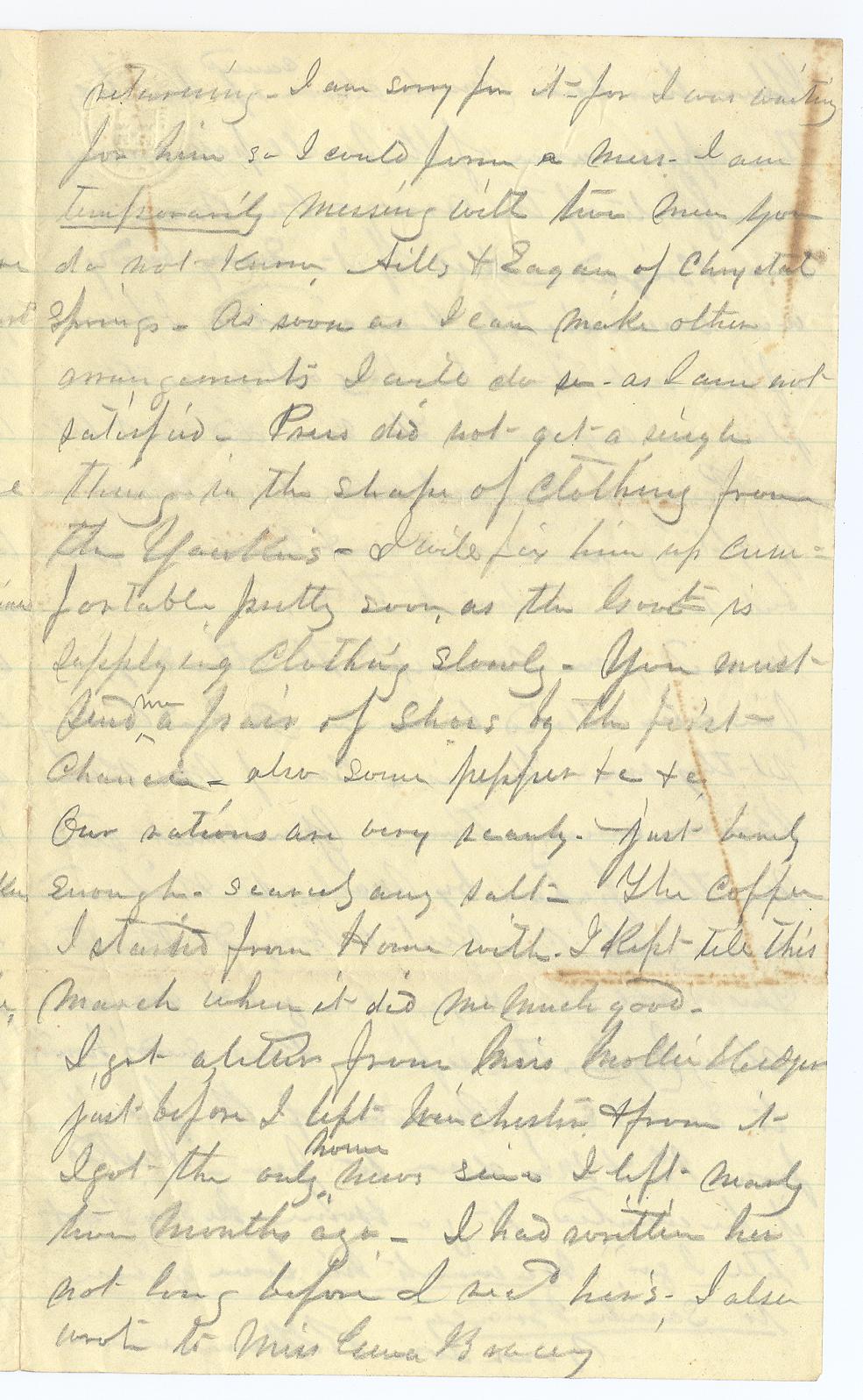 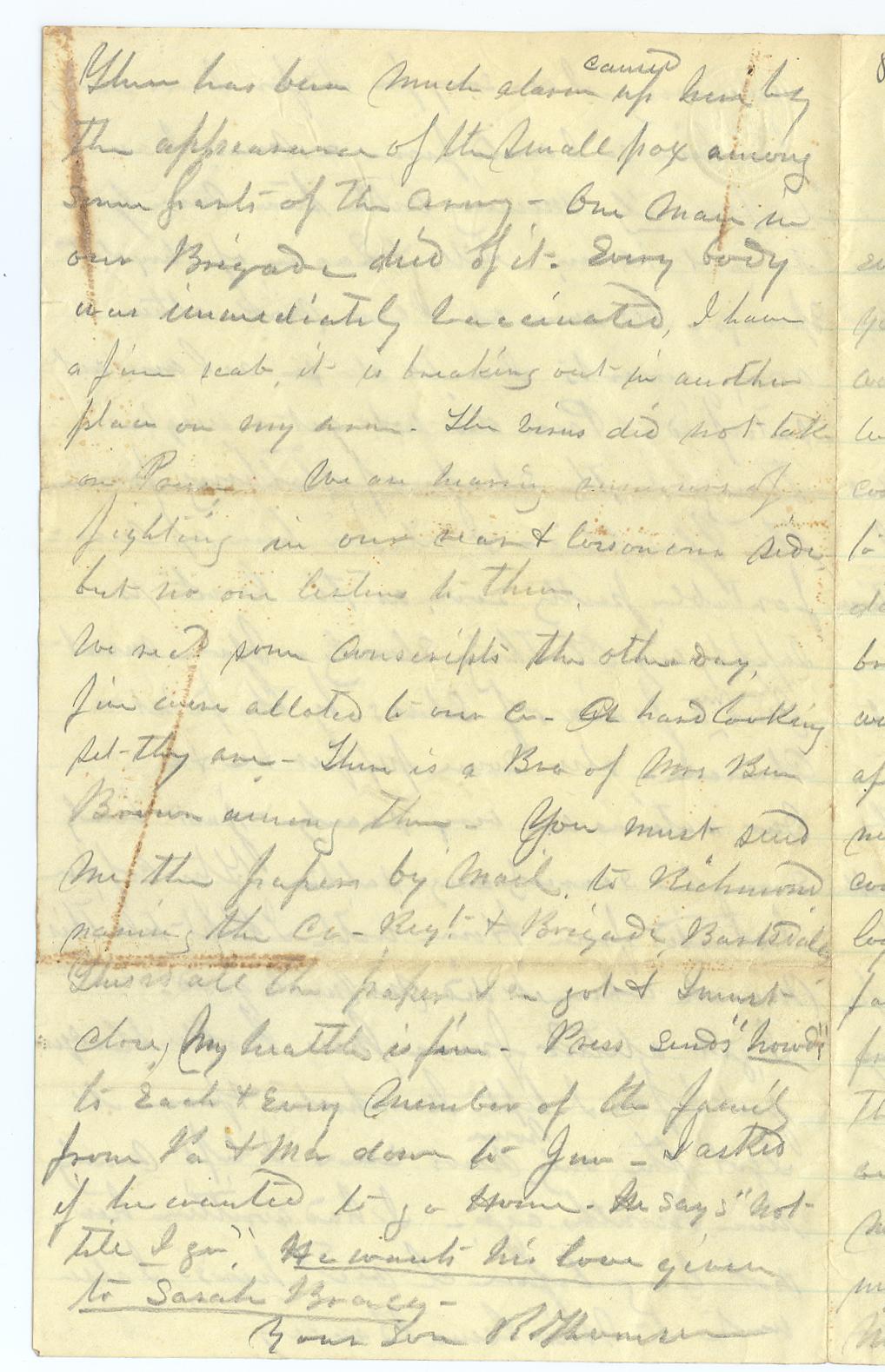 No doubt you have heard of our evacuation of the Valley, and I suppose it is what you have expected for some time. The movement was executed with entire success on our part, though we suffered very severely from fatigue. The weather could not have been finer, and everything seemed to favor us. We marched about twenty miles each day. Nearly every man got here with feet bruised and blistered from heel to toe – very many were barefoot when we started, and numbers got so after marching a while. I held out very well, never straggled at all, though it was all I could do to keep from sitting on each inviting log  by the roadside. marching was more fatiguing this time than when we fell back from Lee’s Mills. I suppose this is because of the weakness of my knee – the difference is very perceptible.

Press is a fine marcher, never lagged in the least, though he carried my baskets and his own. He went all through Maryland with the army, was at Harper’s Ferry and saw the surrender. He had been left in Emmett Butler’s care by Harris – Emmett got him a pair of shoes at Harpers Ferry which have been doing him good service. He is short of clothing, as is the case with all here, white as well as black. Press left his clothing at Rapidan with the regimental baggage as the army passed up, and I guess we will get his carpet sack sometime today, as wagons have just gone after everything. Press is a faithful servant to me considering the chances he has. I am satisfied with him.

I bought a heavy warm Yankee overcoat before I left Winchester. It is a blue dyed black, with a long cape. I got it for $25.00 – that is, I gave my due bill for that amount. I hope Walter Lewis will bring me some money up with him – I will not have any unless he does bring it. I have heard that Wesley Lewis’s leg will prevent him from returning. I am sorry, for I was waiting for him so I could form a mess. I am temporarily messing with two men you do not know, Sills and Eagan of Crystal Springs. As soon as I can make other arrangements I will do so, as I am not satisfied.

Press did not get a single thing in the shape of clothing from the Yankees. I will fix him up comfortably pretty soon, as the Government is supplying clothing slowly. You must send me a pair of shoes by the first chance, also some pepper, etc. Our rations are very scanty – just barely enough, scarcely any salt. The coffee I started from home with I kept till this march, when it did me much good.

I got a letter from Miss Mollie Hodges just before I left Winchester, and from it I got the only home news since I left nearly two months ago. I had written her not long before I received hers. I also wrote to Miss Gina Bracey.

There has been much alarm up here, caused by the appearance of smallpox among some parts of the army. One man in our brigade died of it. Everybody was immediately vaccinated I have a fine scab – it is breaking out on another place on my arm. The virus did not take on Press. We are hearing rumours of the fighting in our rear, and loss on our side, but no one listens to them.

We received some conscripts the other day; five were allotted to our company – a hard -looking set they are. There is a brother of Mrs. Ben Brown among them.

You must send me the papers by mail to Richmond, naming the company, regiment and brigade, Braksdale’s. This is all the paper I’ve got, and must close. My health is fine. Press sends “howdy” to each and every member of the family, from Pa and Ma down to J.C. I asked if he wanted to go home – he says ‘not till I go.’ He wants his love given to Sarah Bracey.