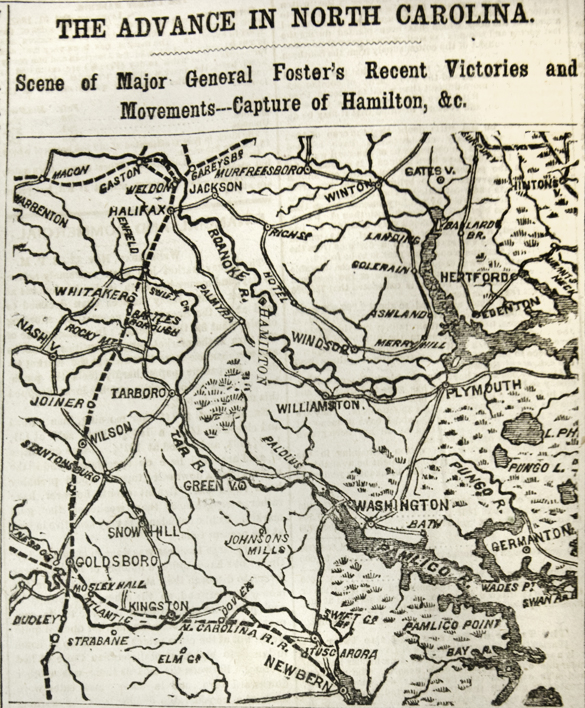 ADVANCE OF THE UNION FORCES.

CAPTURE OF THE TOWN OF HAMILTON.

REBEL ACCOUNTS OF THE AFFAIR,

Advance of Our Army—General J. G. Foster Commands in Person—Hamilton to be Taken—Further Movements Contemplated, &c.

Of course Hamilton has not been attacked, yet is deemed by military authority not indiscreet on my part to disclose the object of the expedition, and for the reason that before this reaches the HERALD, and is published, the force of General Foster will either have done its work or have moved so far inland as to fully apprise the enemy of its design:—

Four batteries of the Third New York artillery, under command of Major Kennedy.

A portion of the Marine artillery, under command of Lieutenant Colonel Manchester.

Two battalions of cavalry, under command of Majors Fitzsimmons and Gassard.

In the onward movement of our army the Marine artillery was in the advance.

This place looks exceedingly lively, especially on the water, for this latter is alive with transports and gunboats. Lieutenant Colonel Lyman, of the Twenty-seventh Massachusetts, commands at this point. The North Carolina garrisons the fort and does guard duty.

When our army got six miles from this place yesterday, in the course of its forward movement, it encountered the pickets of the enemy.  Six or seven of them were captured and two of our horses were killed in a brief skirmish.

At last accounts our army had halted for the night, to advance again at daylight.

A number of navy and marine artillery gunboats are to operate, by way of the Roanoke river, with this overland expedition.

Movements other than Hamilton are contemplated.

Capt. Pendelton, of General Foster’s staff, was seriously if not dangerously injured, yesterday morning, by the running away of his horse.

Advance of the Union Troops from Williamston—The Rebels Retreating to Tarboro— Co–operation of the Navy—The Engagement on the 2d a Union Victory—The Charge Upon Hamilton—A Dash—The Secesh Skedaddling, &c., &c.

We have just arrived at this place, taking it with a grand cavalry charge and combined gunboat movement. Our land forces left Williamston yesterday afternoon, encamped for the night six miles below Hamilton, and moved forward by daylight this morning.  The enemy is in strong force, and has precipitately retreated to Tarboro.  We will seek the earliest opportunity to afford him a fight.

The people of the country are greatly alarmed at our approach.  They flee from home and their property, as we learn and see on the course of our march.

The gunboats have successfully co-operated with us; that is, the Hunchback, Captain Calhoun; Hetset, Captain ——-; Seymour, Captain Wells; Valley City, Captain Furniss; and the Perry, Captain Flusser.

The gunboats had a few minutes engagement with the enemy as they came up the Roanoke river.

General Foster’s command had a severe engagement on Sunday night with three thousand rebel infantry at a breastwork, supported by six pieces of artillery.  We killed and wounded sixty of the enemy.  Our loss was ten.  The forces immediately engaged were the twenty-fourth Massachusetts, Forty-fourth Massachusetts, Marine artillery, Belger’s battery, and the Third New York cavalry.

The Marine artillery made a gallant and bold dash across a creek and lost four of their men. One of the Twenty-fourth was killed.

When we charged into Hamilton—Major Gerrard’s battalion of the Third New York cavalry being in the advance—we found the roads leading from the town covered with wagons containing the household goods and trumpery of those hastily leaving the place.

Accidentally, Colonel Potter, Captain Wilson, a corporal, a private, and your correspondent charged into and out of the town, a distance of four miles, and killed one rebel, wounded two others, took two prisoners, and captured ten horses.  So much for a little party.

The enemy left this place, abandoning his earthworks precipitately.

We move from this place in two hours, to proceed to and take Tarboro, on Tar river.  Gunboats will co-operate with us.

The North State and some other gunboat had an engagement, day before yesterday, on the Tar river.

Our marches have been made with great rapidity.

Expect shortly better and more important news than I have referred to here.

REBEL ACCOUNTS.
The Capture of Hamilton.
(From the Richmond Dispatch, Nov. 10.)
There is no longer any doubt that the enemy forces in Eastern North Carolina are now moving on Weldon, with a view of tapping the railroad at that point. We published some days ago an account of a fight which took place between three companies of the Twenty-sixth North Carolina regiment and the advance guard of the enemy on Sunday last.  In this engagement the enemy was repulsed, our loss being ten killed and twenty-nine wounded.

Later intelligence furnishes us with some fuller particulars of the advance, from which it appears that the enemy landed large forces at Washington on Sunday; and advanced towards Hamilton and took possession of that town.  It is reported that they destroyed nearly the entire place. Their force at Hamilton is represented to be about ten thousand infantry, with forty pieces of artillery and a considerable force of cavalry. They are also reported to have landed a large force at Palmyra, Halifax county, some twenty-five or thirty miles from Weldon. General Pettigrew commands the Confederate force at Weldon.  The Yankees are said to be commanded by General Foster.

There was a report in circulation on Saturday that an engagement occurred in the vicinity of Tarboro’, Edgecombe county; on Thursday last, between some six regiments of North Carolina State troops, under the command of Gov. Vance and Gen. Martin, and about ten thousand of the enemy. The Raleigh Journal of Saturday says that this report was incorrect, and that nothing of the kind had taken place since the fight of Sunday evening.

The impression prevails that the enemy is concentrating his forces in the neighborhood of Williamston, Martin county, with the intention of attacking some point on the line of the Wilmington and Weldon Railroad.

A despatch from Goldsboro’, dated ten o’clock Friday night, states that there had been no fighting, and that the enemy had retreated in the direction of Weldon.  We do not exactly understand how they could have retreated towards Weldon, since that is the point towards which they were supposed to be advancing.

A letter in the Petersburg Express, from Tarboro’, dated the 5th, says the Yankee army is marching upon that town with 12,000 troops.  The information is derived from a Yankee deserter.  They are represented to be within fifteen miles of the town and within four miles of the Confederate troops.

Advance of Our Troops in Eastern North Carolina.

The news from the Roanoke region of North Carolina has, within the past few days, occasioned some anxiety in the public mind. The Raleigh Register entertains no doubt that a movement is about to be made against the railroads running from Petersburg to Wilmington, and that Weldon is the point to be attacked. It is presumed that, in view of the probability above mentioned, the proper precautionary measures have been taken for the defence of this important line of communication. The Raleigh Standard gives the following statement of the recent skirmish near Hamilton:—

It appears that three companies of the Twenty-sixth North Carolina regiment had been sent down below Hamilton or Williamston, as other forces had been sent to other points, to enable our people to remove their negroes and other movable property from beyond the enemy’s lines. Many were availing themselves of this arrangement, and were removing large numbers of blacks. The Yankees, hearing of this, determined to prevent it, if possible, and hence removed a force in the direction of Hamilton or Williamston.

Colonel Burgwyn, with his small force, determined to arrest their progress, and hence attacked them, keeping in check a very superior force of the enemy until reinforced, when he determined to fall back to a better position. The rumors about the landing of the enemy in Bertie and on Tar river, and of his intended advance upon Tarboro’, were believed to be premature. We hope that the rumored destruction of property at Hamilton by the enemy is also magnified or unfounded.

Still later advices are received through a passenger who reached Raleigh from Tarboro on Friday last. He reports that our troops met the enemy seven miles below that town on Thursday, and drove him back to the shelter of his gunboats; and that the inhabitants of Tarboro and the adjacent country, apprehensive of another advance, are moving off as fast as they can.  Another report says that our troops in Thursday’s engagement were commanded by General Martin and Governor Vance, and that they succeeded in repulsing the enemy, but with heavy loses on both sides.  A letter from Tarboro dated Wednesday, P. M., stated that the enemy, 12,000 strong, was within fifteen miles of that place.

Confirmation of the News of the Movement.

There is no longer any doubt that the Yankees are concentrating their forces in the neighborhood of Williamstown, with the intention of attacking some points on the Wilmington and Weldon Railroad.  A letter from Tarboro, of the 5th instant, says the Yankees are marching on that ton with twelve thousand troops.  They are represented to be within fifteen miles of the town and within one mile of the Confederate troops.

Arrival of Yankee Prisoners.
[From the Richmond Dispatch, Nov. 10.]
Eleven privates belonging to the First Vermont cavalry, captured by the First North Carolina troop in Warren county, October 26, were brought to Richmond on Saturday.

[Map headlines from columns 3 and 4:]

THE ADVANCE IN NORTH CAROLINA