16 November 1862: “I was greatly disappointed in the appearance of the city, it is the most dilapidated looking place…”

Item description: Charles M. Alley was a private in the 44th Massachusetts Infantry Regiment of the United States Army during the Civil War. After the war, he participated in a number of business ventures in Boston, Mass., and Hartford, Conn. He married around 1870 and had six children. The collection consists of letters and other documents related to Charles M. Alley’s service in the 44th Massachusetts Infantry Regiment during the Civil War. Included is a letter written by Alley on 16 November 1862 from New Bern, N.C., detailing his regiment’s departure from Boston, Mass., landing in New Bern, and marching and occasional fighting in eastern North Carolina. 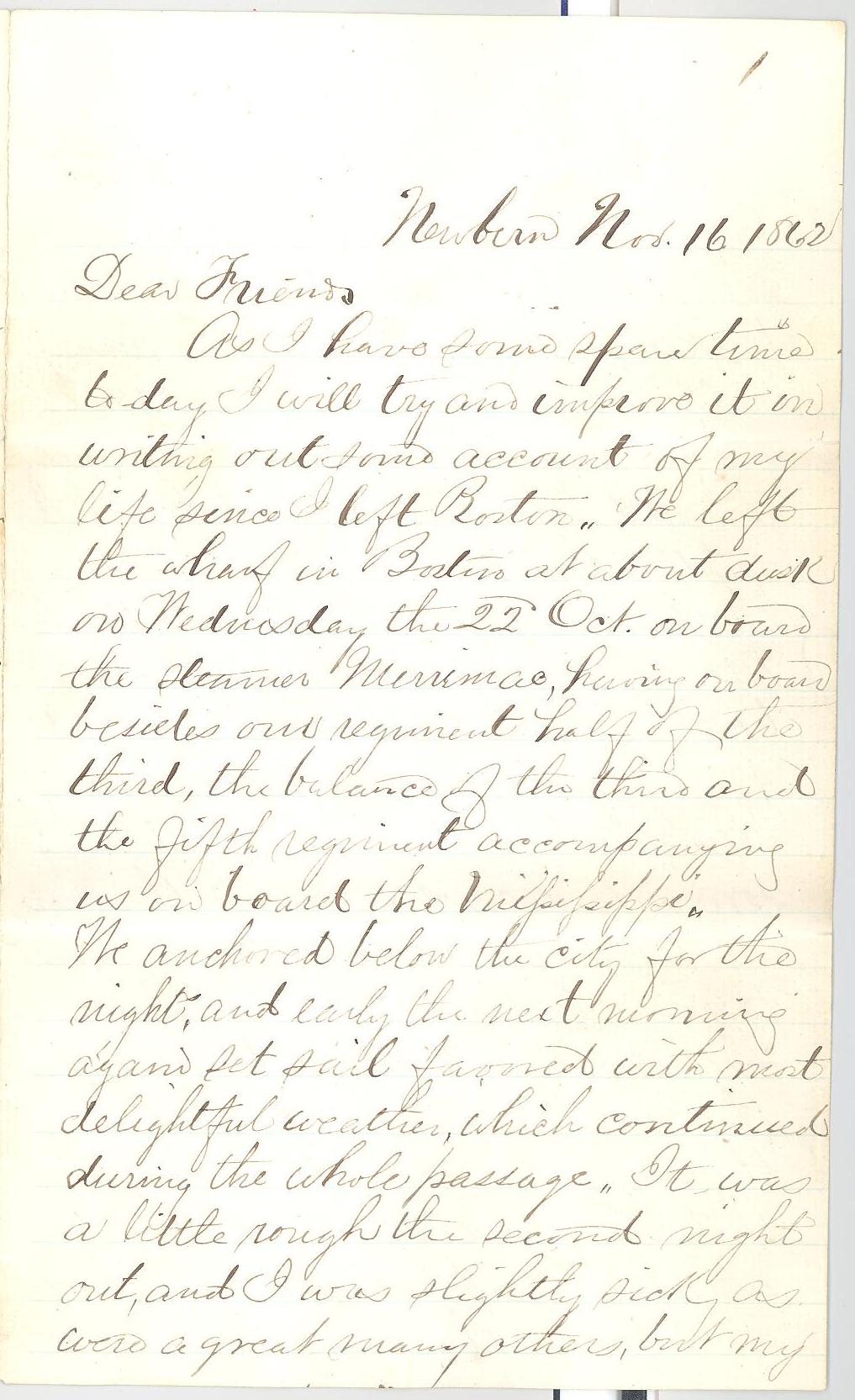 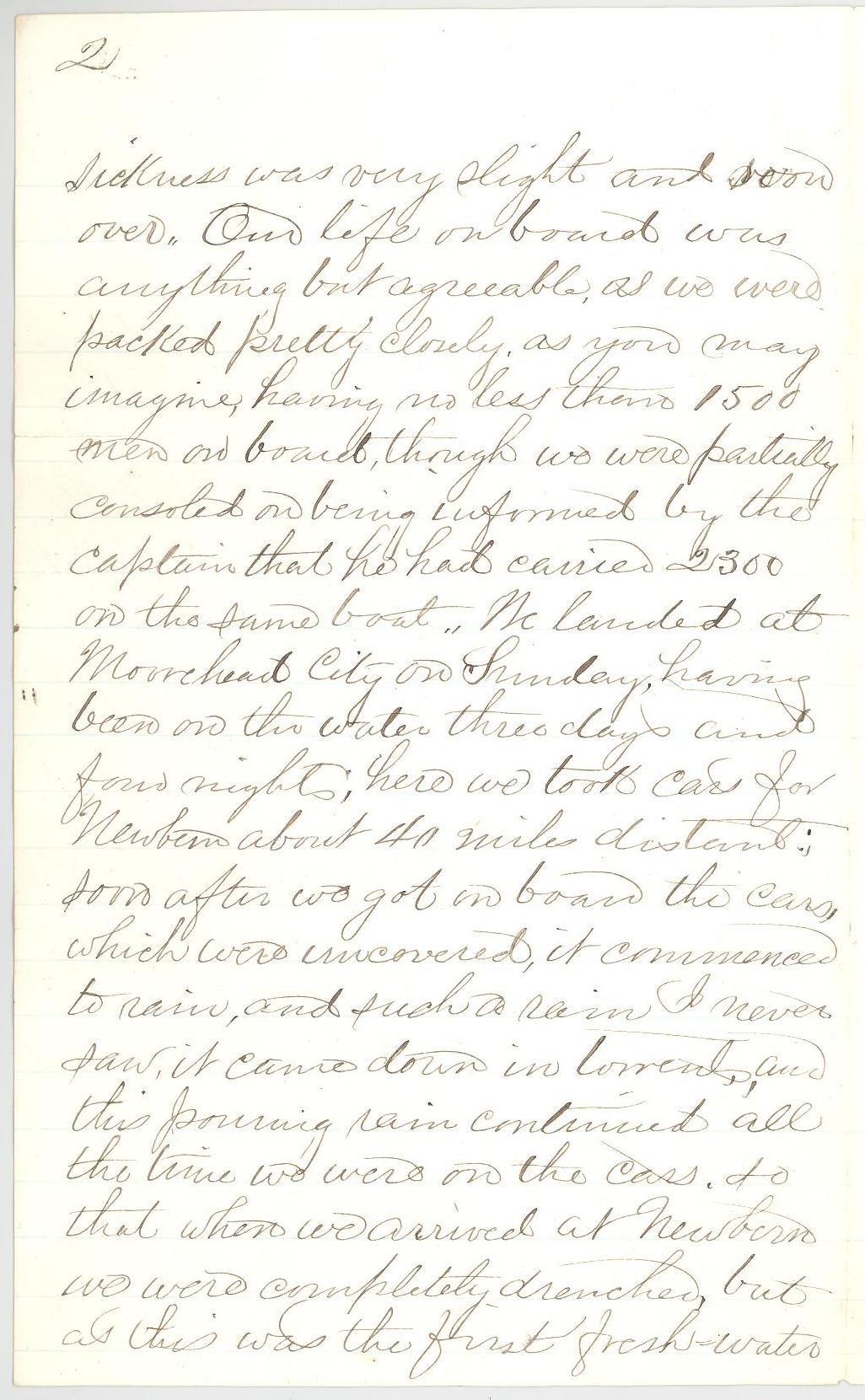 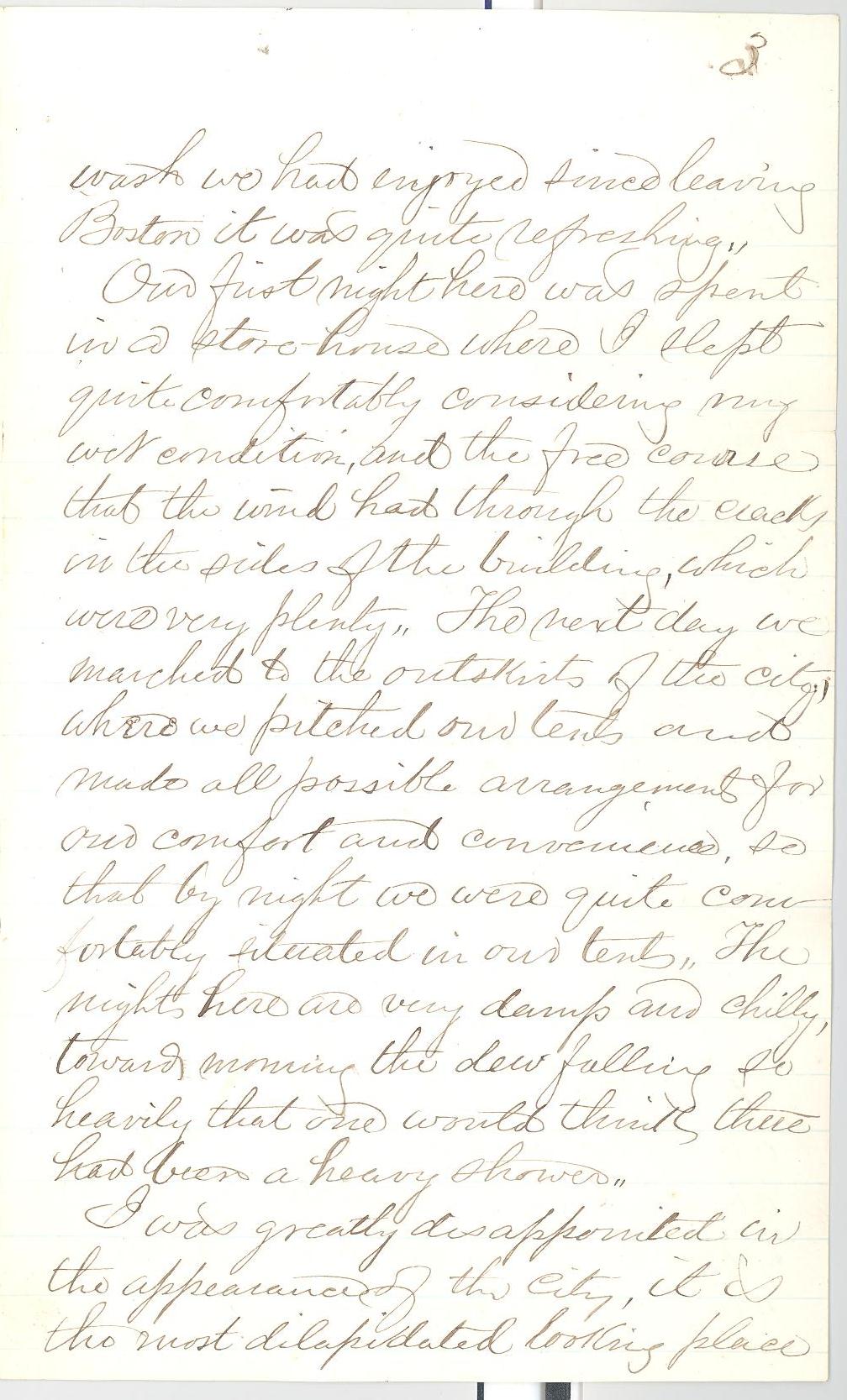 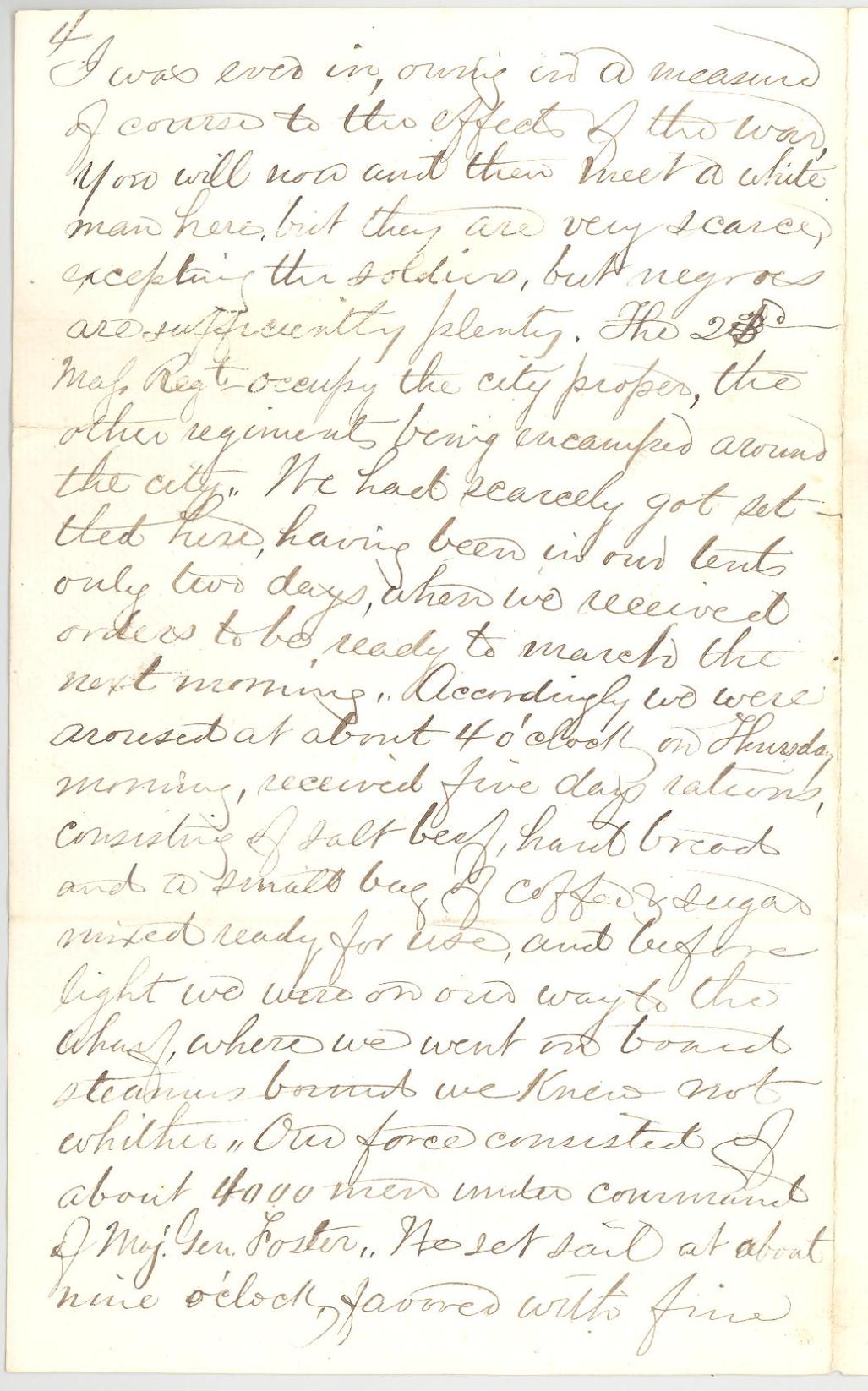 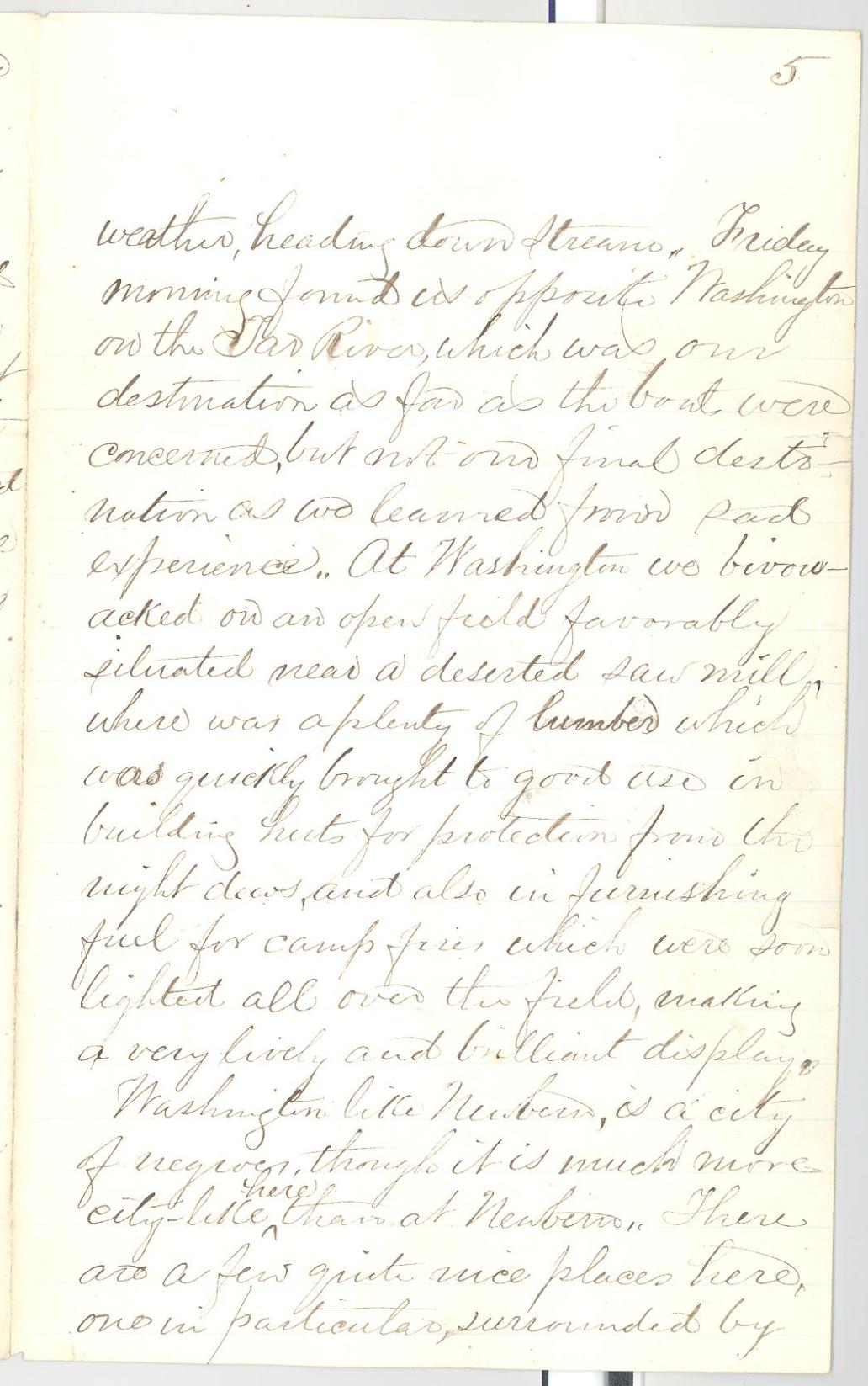 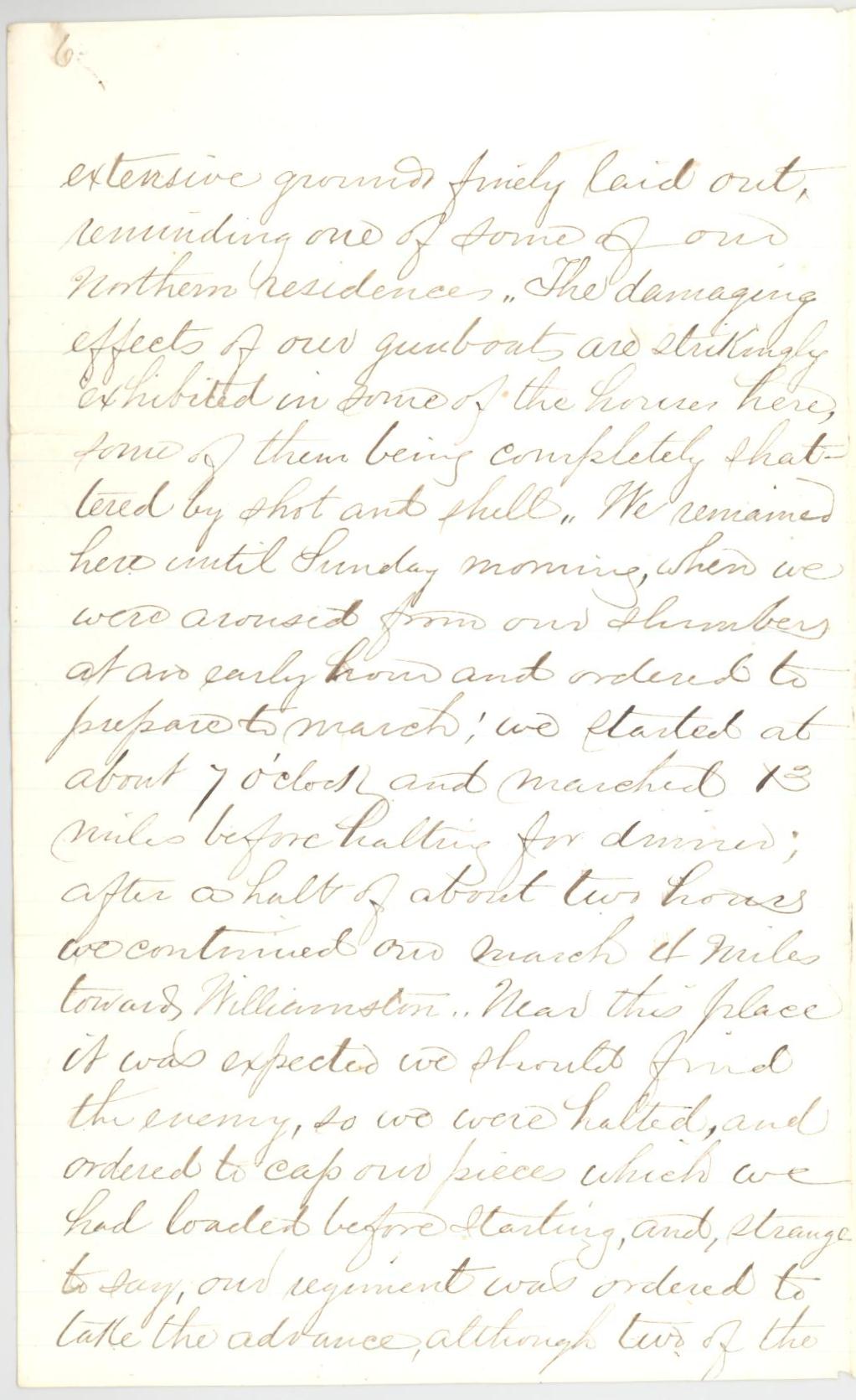 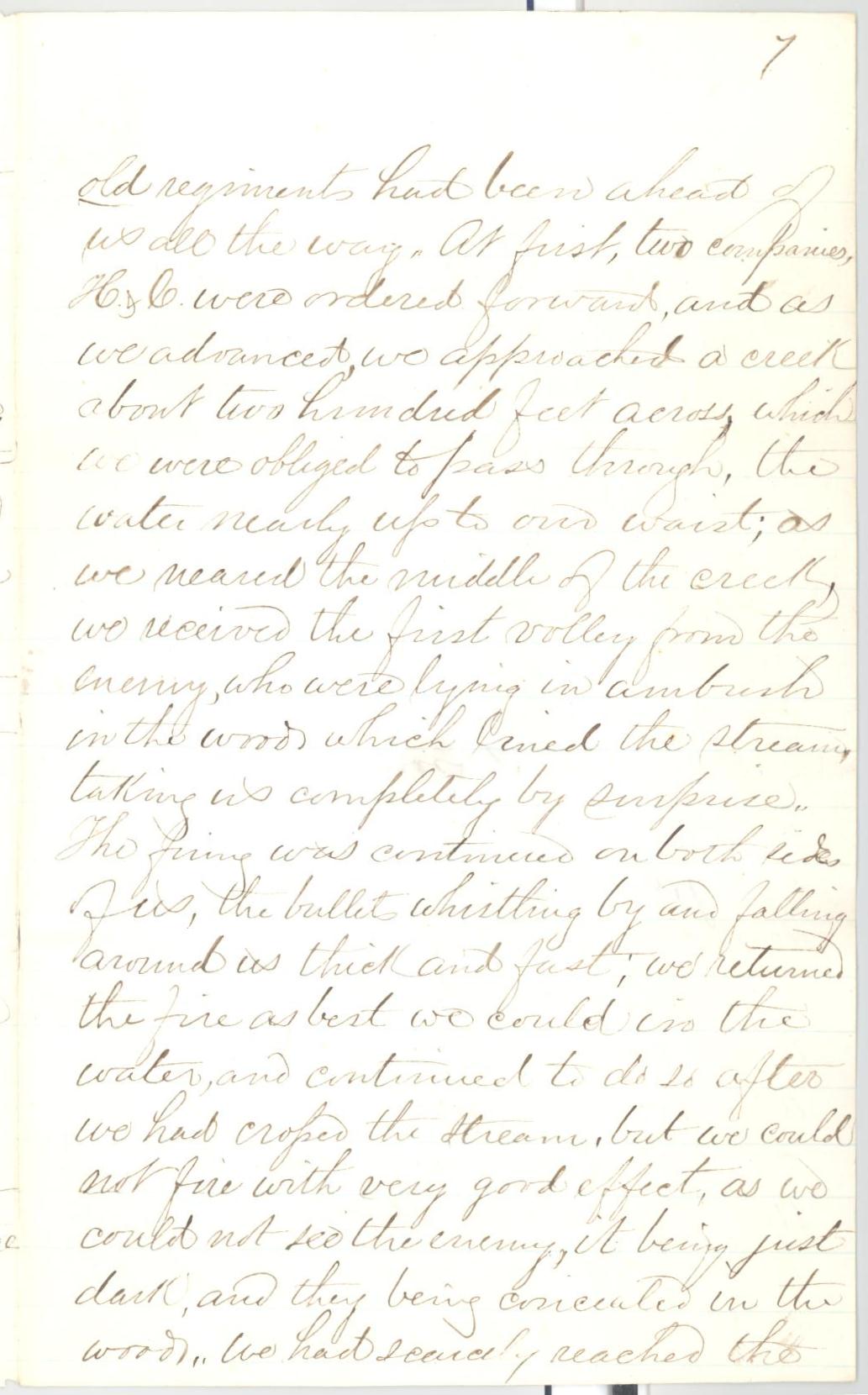 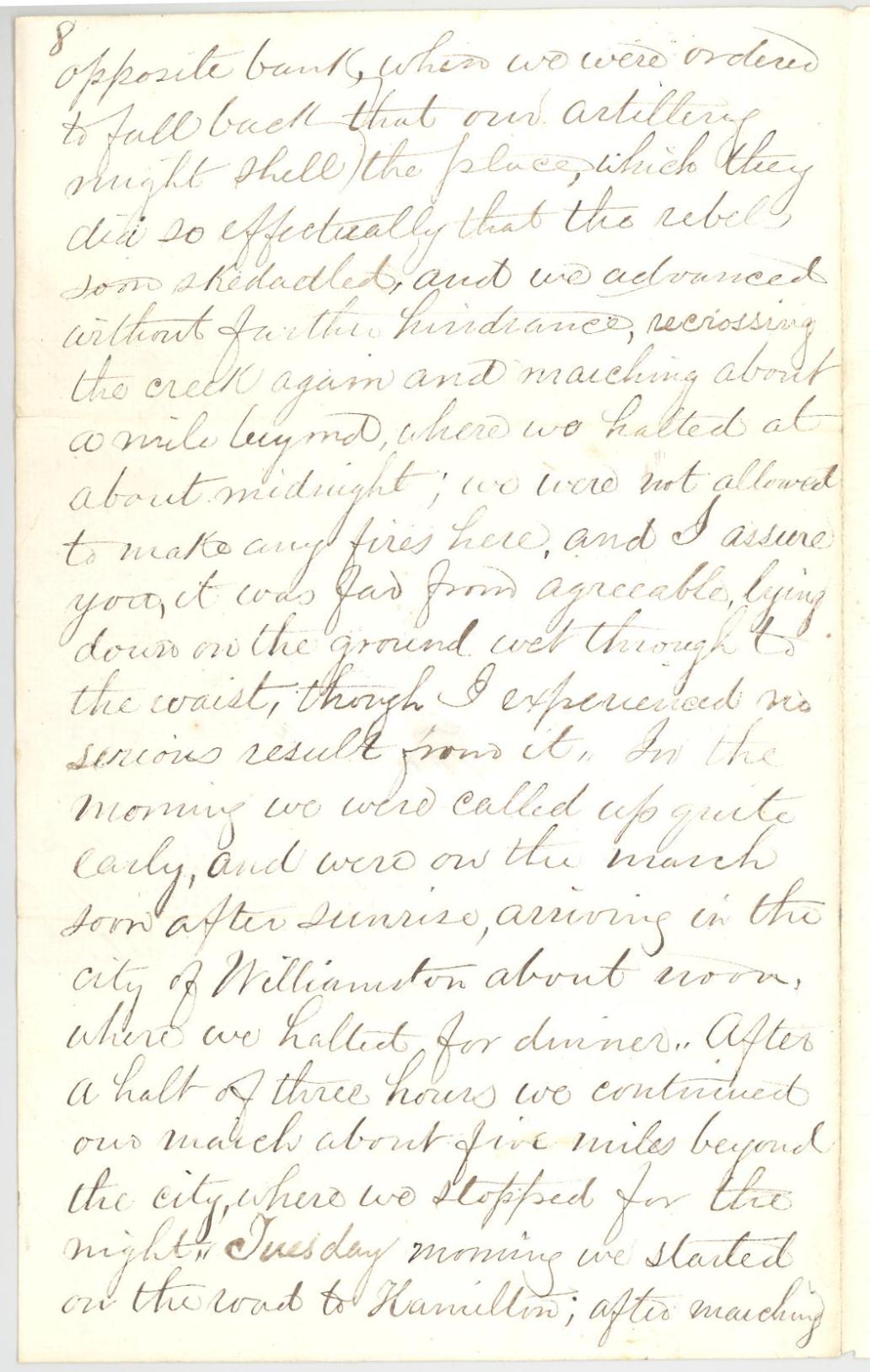 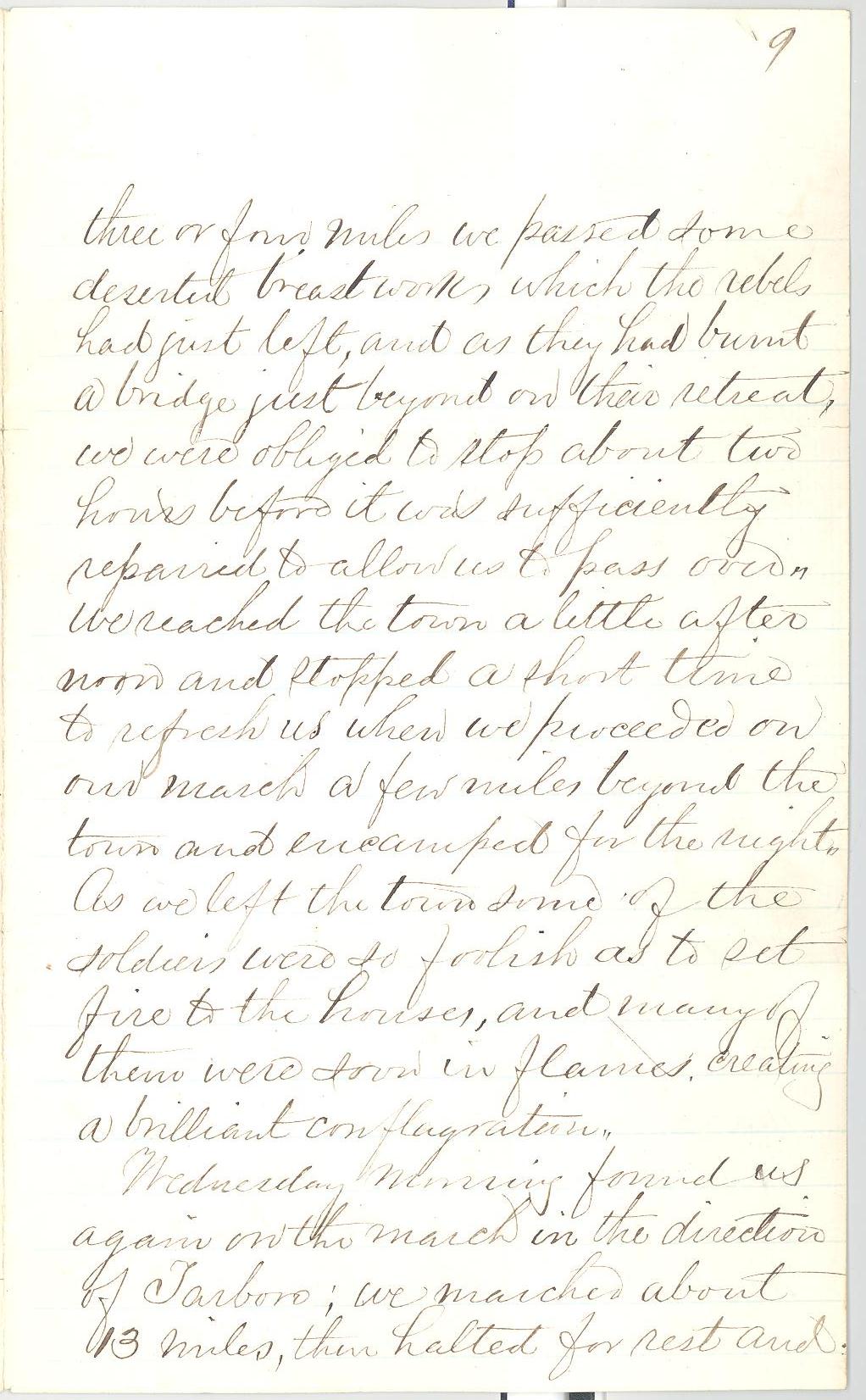 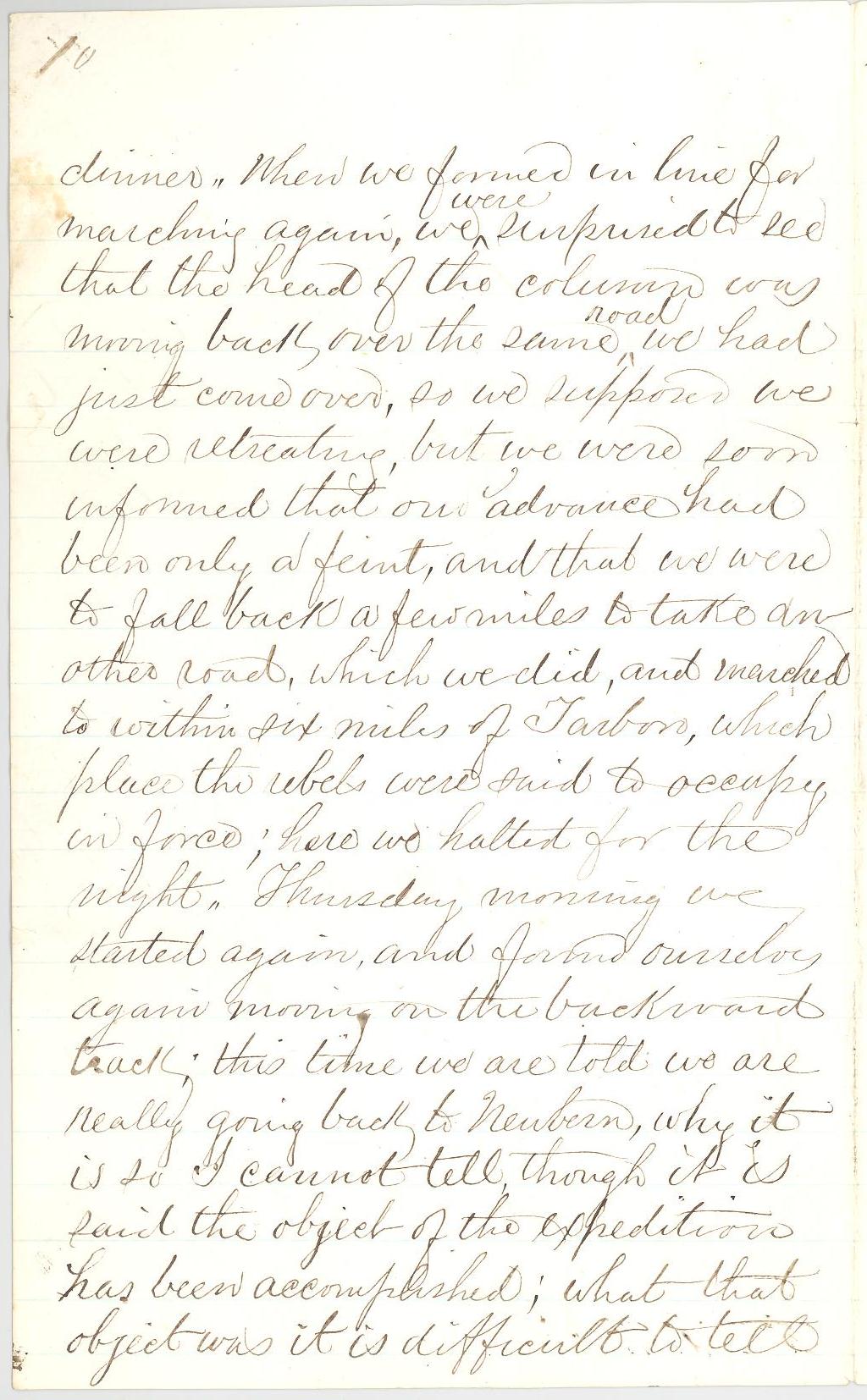 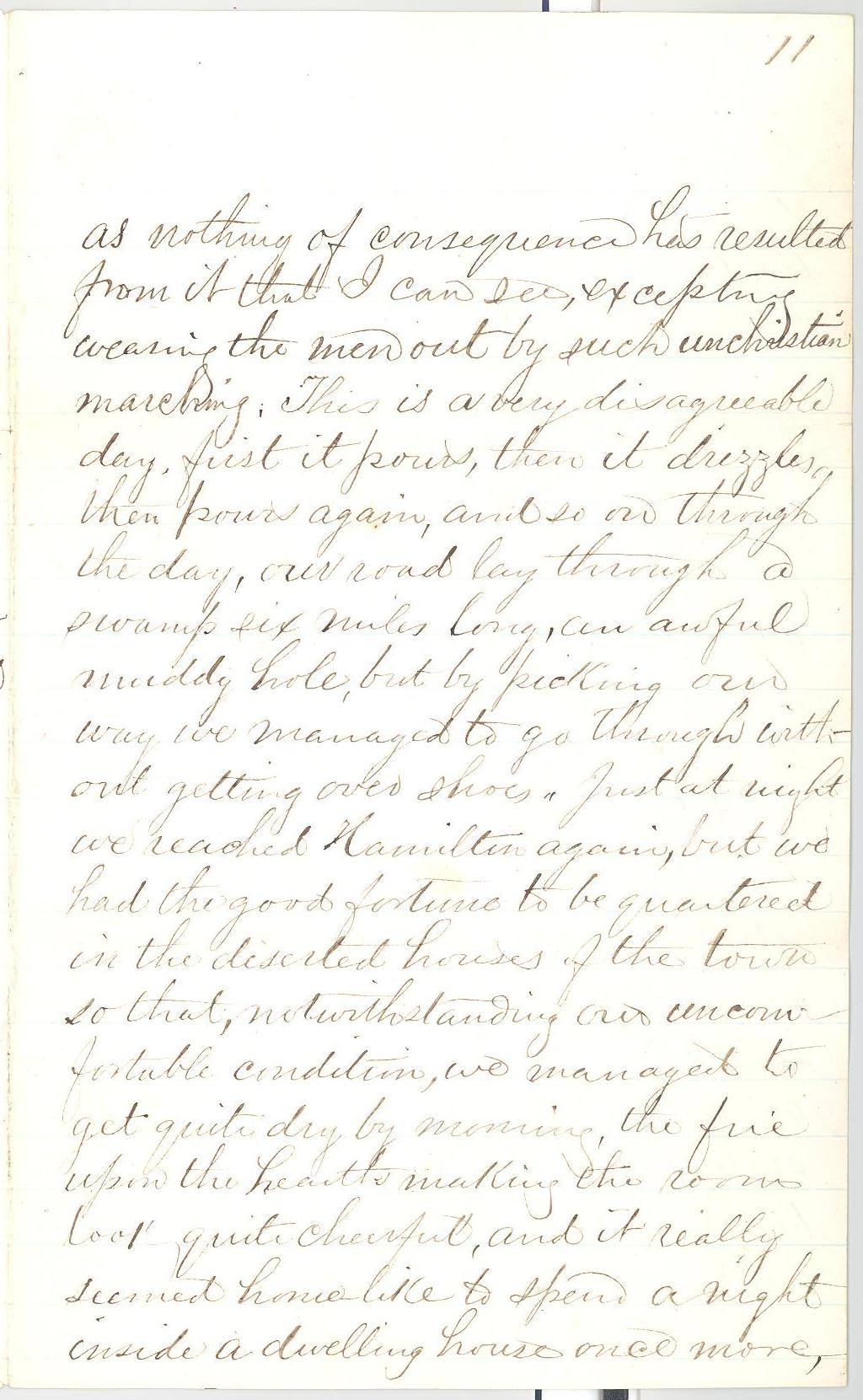 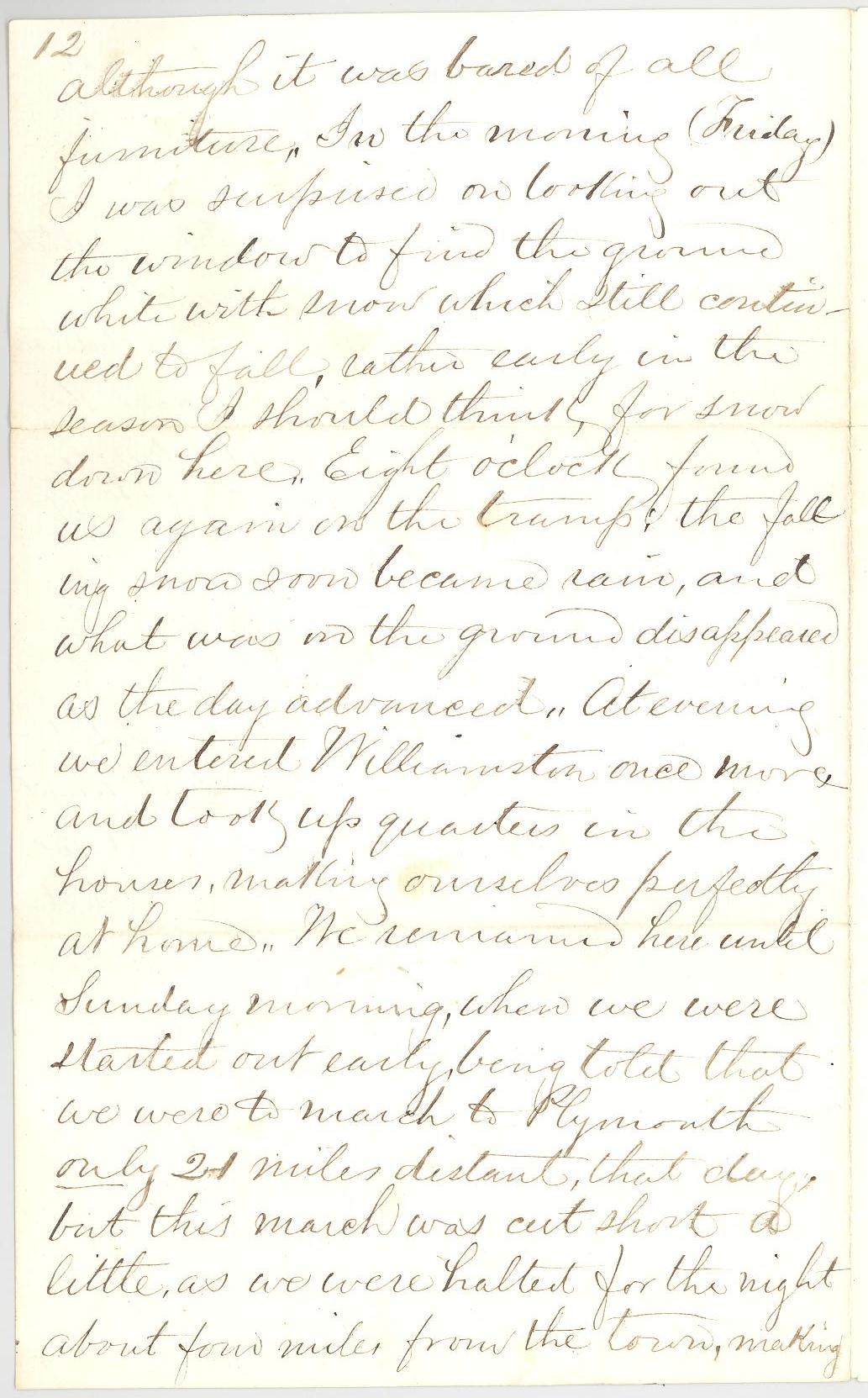 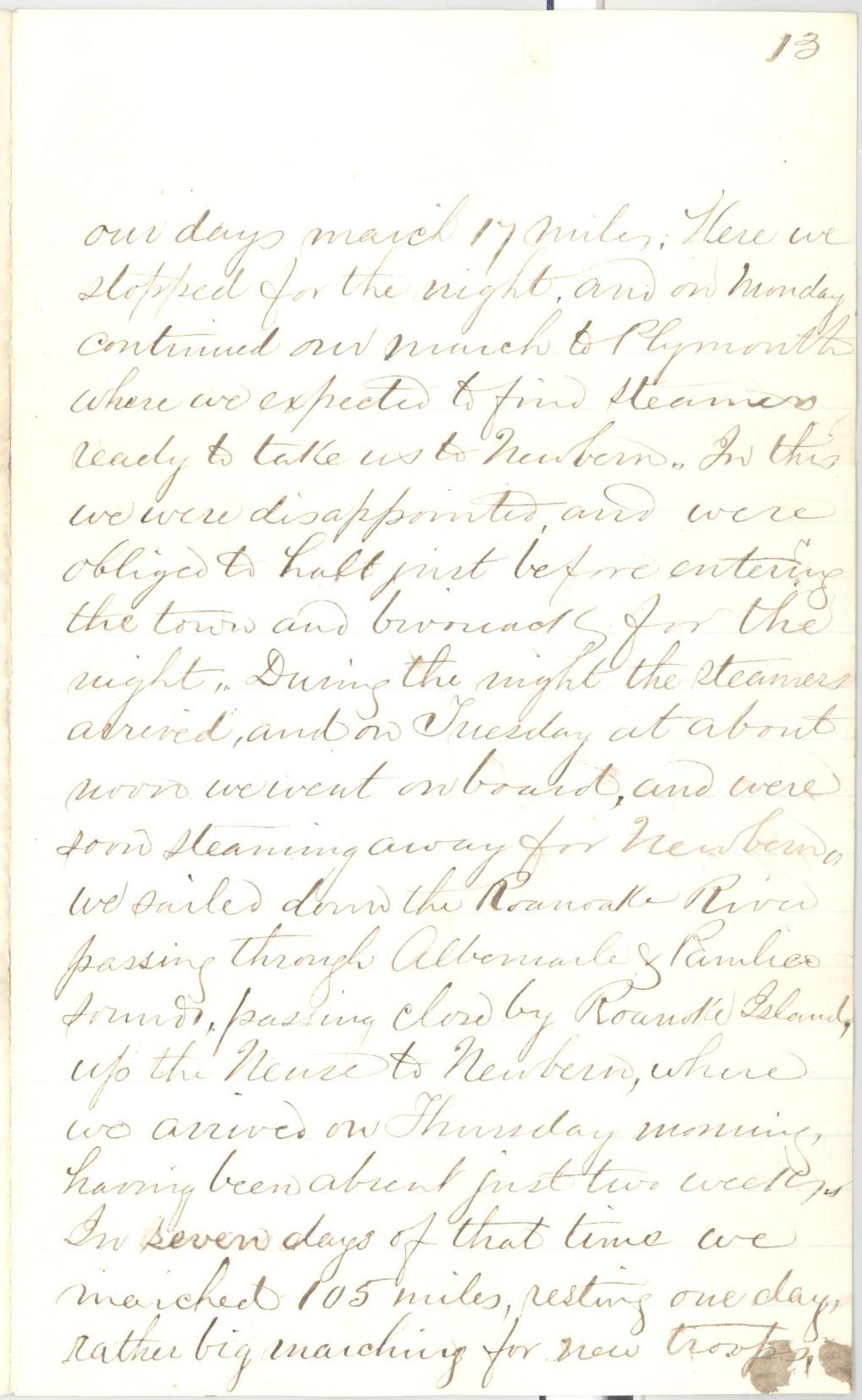 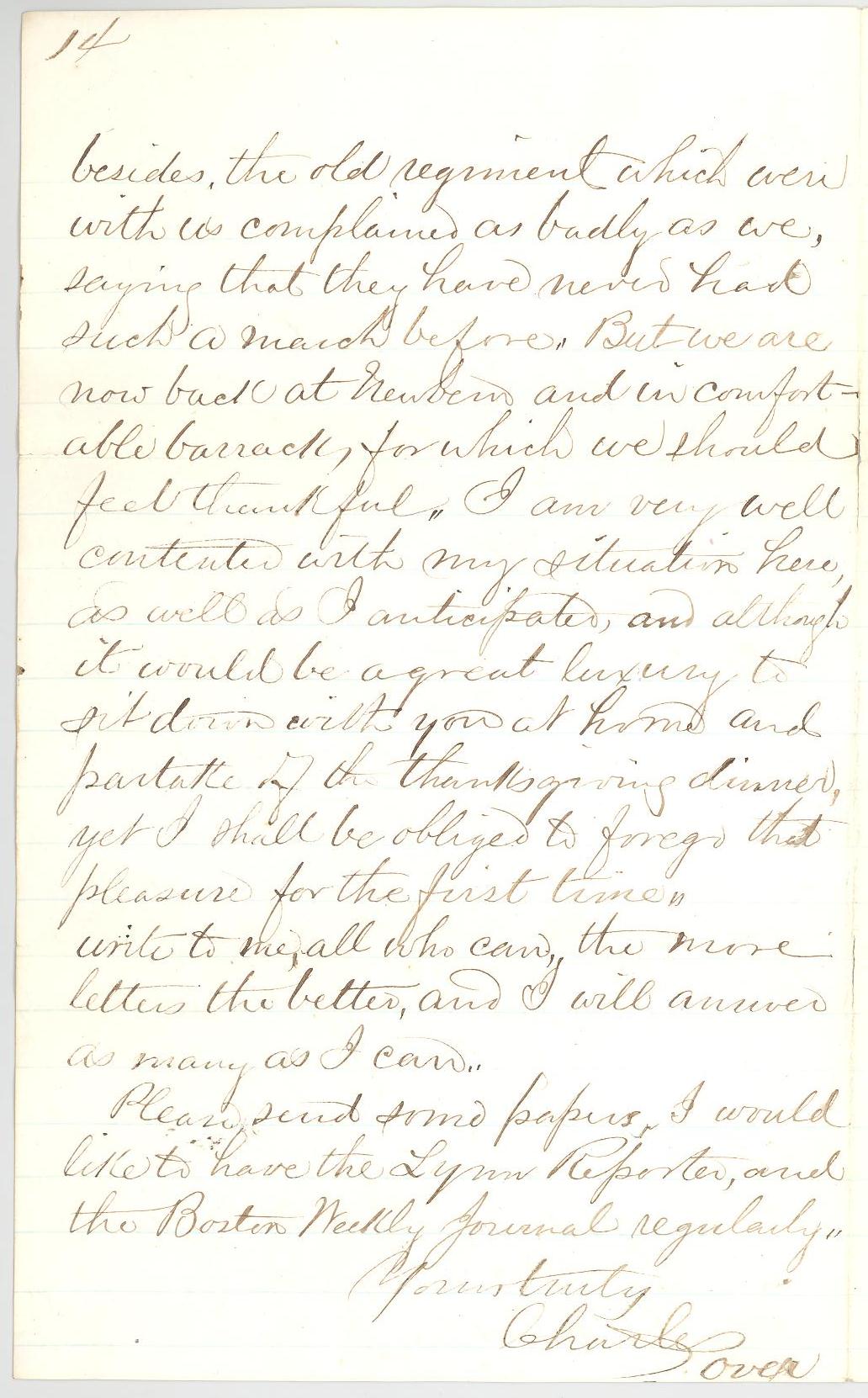 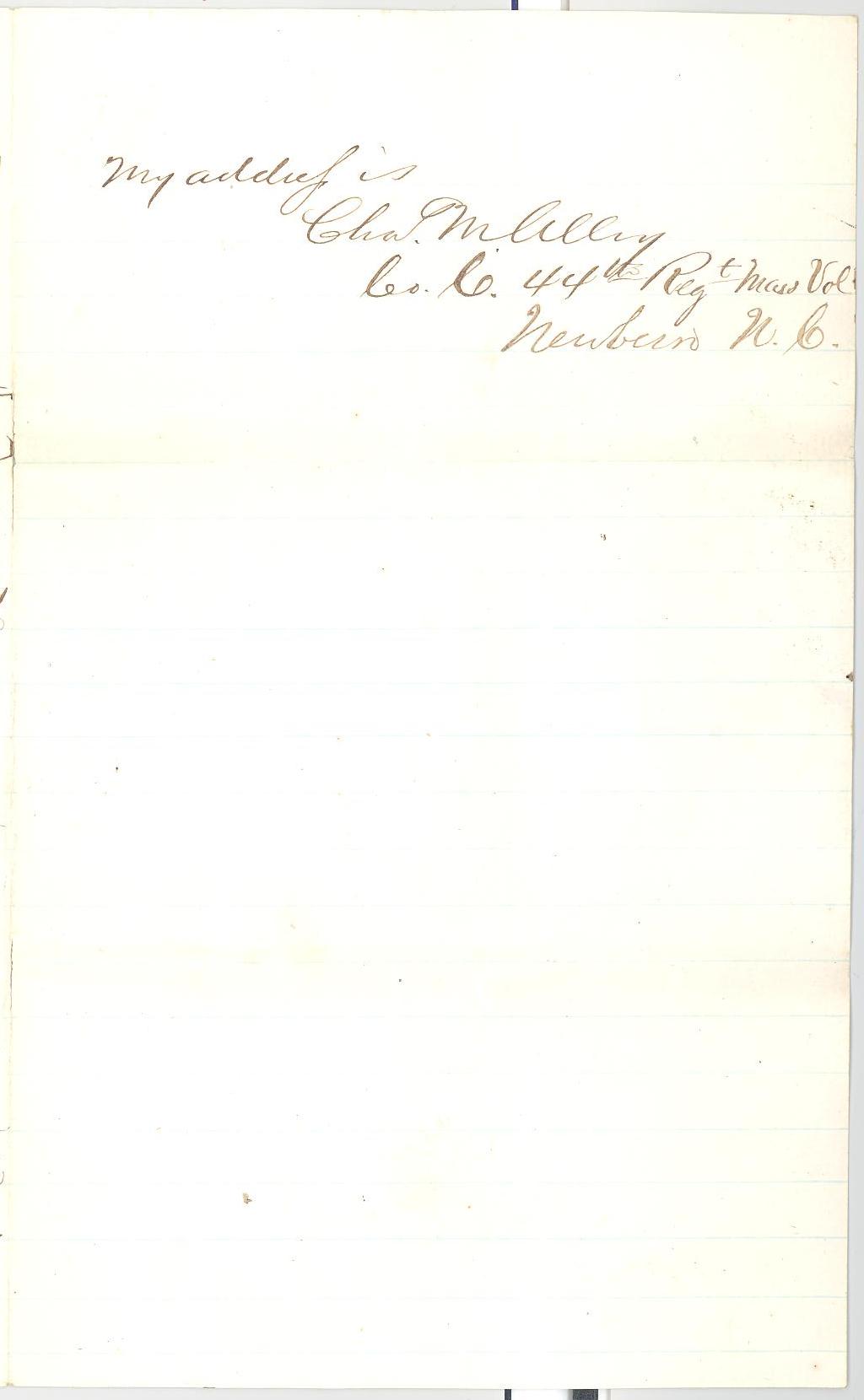 As I have some spare time today I will try and improve it in writing out some account of my life since I left Boston. We left the wharf in Boston at about dusk on Wednesday the 22 Oct. on board the steamer Merrimac, having on board besides our regiment half of the third, the balance of the third and the fifth regiment accompanying us on board the Mississippi.

We anchored below the city for the night, and early the next morning again set sail favored with most delightful weather, which continued during the whole passage. It was a little rough the second night out, and I was slightly sick as were a great many others, but my sickness was very slight and soon over. Our life on board was anything but agreeable, as we were packed pretty closely. as you may imagine, having no less than 1500 men on board, though we were partially consoled on being informed by the captain that he had carried 2300 on the same boat. He landed at Moorhead City on Sunday, having been on the water three days and four nights; here we took cars for Newbern about 40 miles distant; soon after we got on board the cards, which were uncovered, it commenced to rain, and such a rain I never saw it came down in torrents, and this pouring rain continued all the time we were on the cars to that when we arrived at Newbern we were completely drenched, but as this was the first fresh water wash we had enjoyed since leaving Boston it was quite refreshing.

Our first night here was spent in a store-house where I slept quite comfortably considering my wet condition, and the free course that the wind had through the cracks in the sides of the building, which were very plenty. The next day we marched to the outskirts of the city where we pitched our tents and made all possible arrangements for our comfort and convenience, so that by night we were quite comfortably situated in our tents. The nights here are very damp and chilly, toward morning the dew falling so heavily that one would think there had been a heavy shower.

I was greatly disappointed in the appearance of the city, it is the most dilapidated looking place besides, the old regiment which were with us complained as badly as we, saying that they have never had such a march before. But we are now back at Newbern and in comfortable barracks for which we should feel thankful. I am very well contented with my situation here, as well as I anticipated, and although it would be a great luxury to sit down with you at home and partake of the thanksgiving dinner, yet I shall be obliged to forgo that pleasure for the first time. Write to me all who can, the more letters the better, and I will answer as many as I can.

Please send some papers I would like to have the Lynn Reporter, and the Boston Weekly Journal regularly,

Yours truly,
Charles
over