16 December 1862: “a part of the time the flag of the 9th New Jersey was unfurled behind us also, which might have drawn an extra amount of fire…”

Posted on 16 Dec ’12 by Biff Hollingsworth

Item description: Item description: Portions of “Leaves from a Diary Written While Serving in Co. E, 44 Mass., Dep’t of No. Carolina,” an account, written by John Jasper Wyeth of Co. E, of the experiences of the 44th Massachusetts Infantry Regiment. The book includes this letter written on 16 December 1862, which describes the Battle of Whitehall (or White Hall Ferry) in Wayne County, N.C. 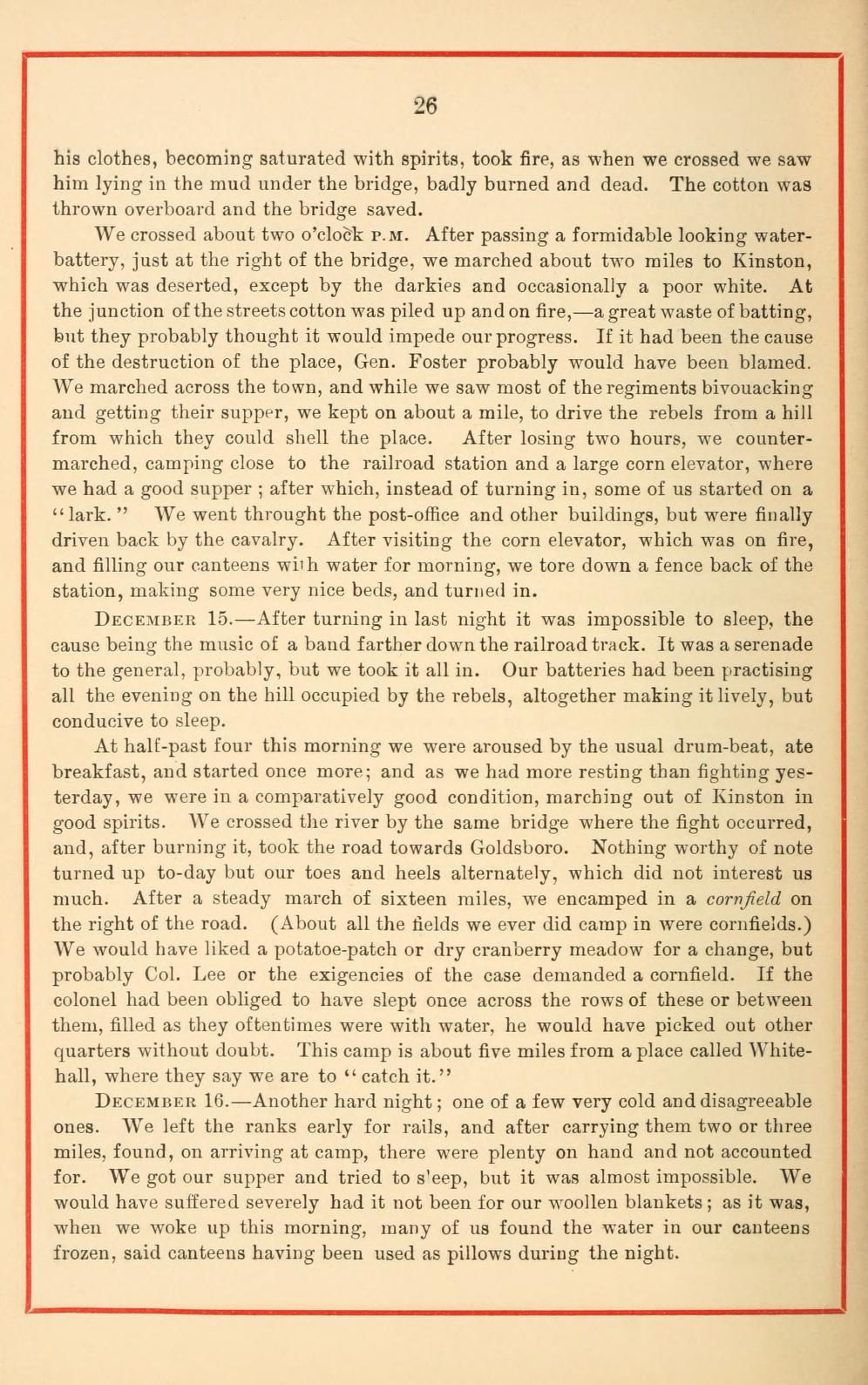 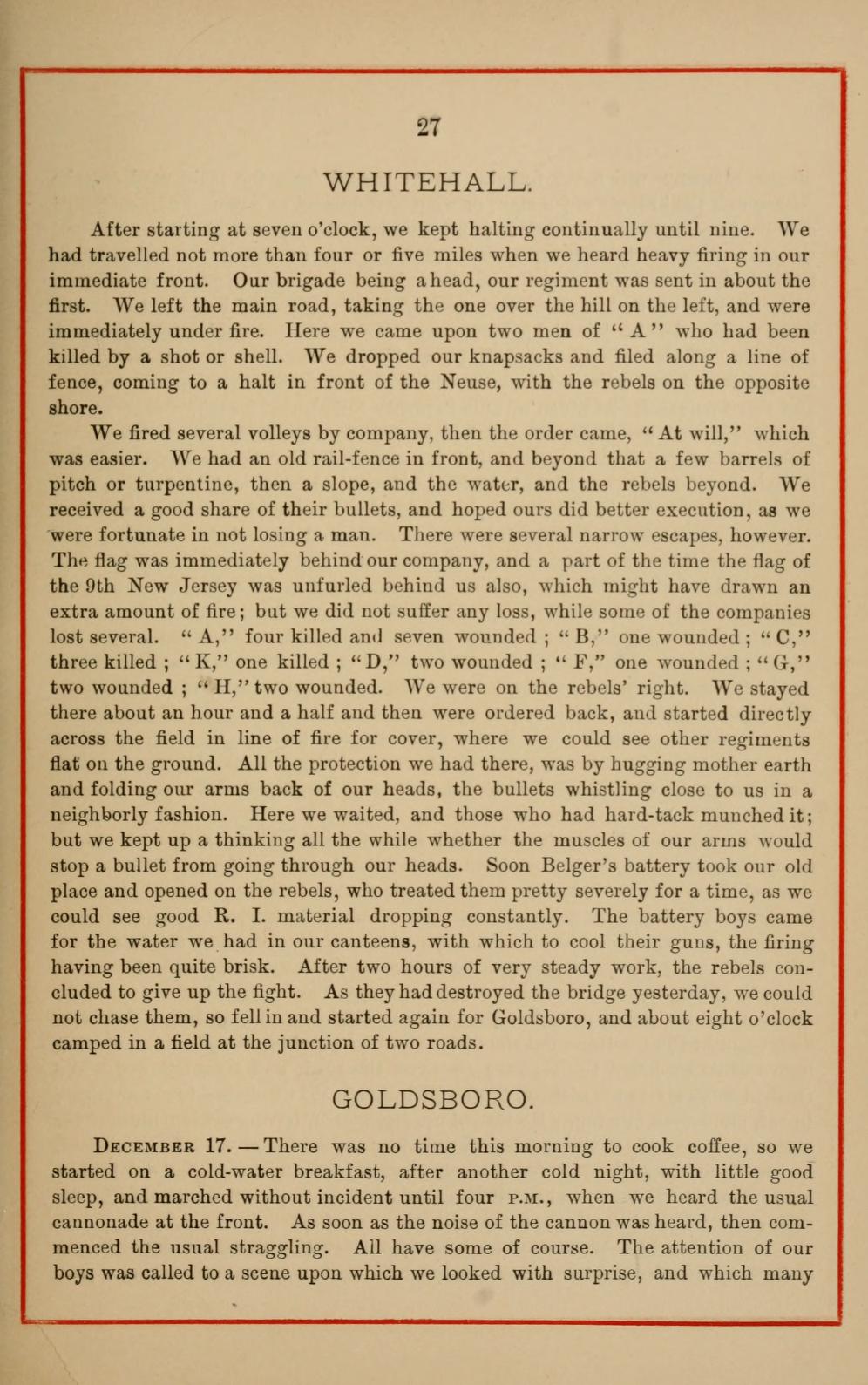 Another hard night; one of a few very cold and disagreeable ones. We left the ranks early for rails, and after carrying them two or three miles, found, on arriving at camp, there were plenty on hand and not accounted for. We got our supper and tried to sleep, but it was almost impossible. We would have suffered severely had it not been for our woollen blankets; as it was, when we woke up this morning, many of us found the water in our canteens frozen, said canteens having been used as pillows during the night.

After starting at seven o’clock, we kept halting continually until nine. We had travelled not more than four or five miles when we heard heavy firing in our immediate front. Our brigade being ahead, our regiment was sent in about the first. We left the main road, taking the one over the hill on the left, and were immediately under fire. Here we came upon two men of “A” who had been killed by a shot or shell. We dropped our knapsacks and filed along a line of fence, coming to a halt in front of the Neuse, with the rebels on the opposite shore.

We fired several volleys by company, then the order came, “At will,” which was easier. We had an old rail-fence in front, and beyond that a few barrels of pitch or turpentine, then a slope, and the water, and the rebels beyond. We received a good share of their bullets, and hoped ours did better execution, as we were fortunate in not losing a man. There were several narrow escapes, however. The flag was immediately behind our company, and a part of the time the flag of the 9th New Jersey was unfurled behind us also, which might have drawn an extra amount of fire; but we did not suffer any loss, while some of the companies lost several. “A,” four killed and seven wounded; “B,” one wounded; “C,” three killed; “K,” one killed; “D,” two wounded; “F,” one wounded; “G,” two wounded; “H,” two wounded. We were on the rebels’ right. We stayed there about an hour and a half and then were ordered back, and started directly across the field in line of fire for cover, where we could see other regiments flat on the ground. All the protection we had there, was by hugging mother earth and folding our arms back of our heads, the bullets whistling close to us in a neighborly fashion. Here we waited, and those who had hard-tack munched it; but we kept up a thinking all the while whether the muscles of our arms would stop a bullet from going through our heads. Soon Belger’s battery took our old place and opened on the rebels, who treated them pretty severely for a time, as we could see good R.I. material dropping constantly. The battery boys came for the water we had in our canteens, with which to cool their guns, the firing having been quite brisk. After two hours of very steady work, the rebels concluded to give up the fight. As they had destroyed the bridge yesterday, we could not chase them, so fell in and started again for Goldsboro, and about eight o’clock camped in a field at the junction of two roads.