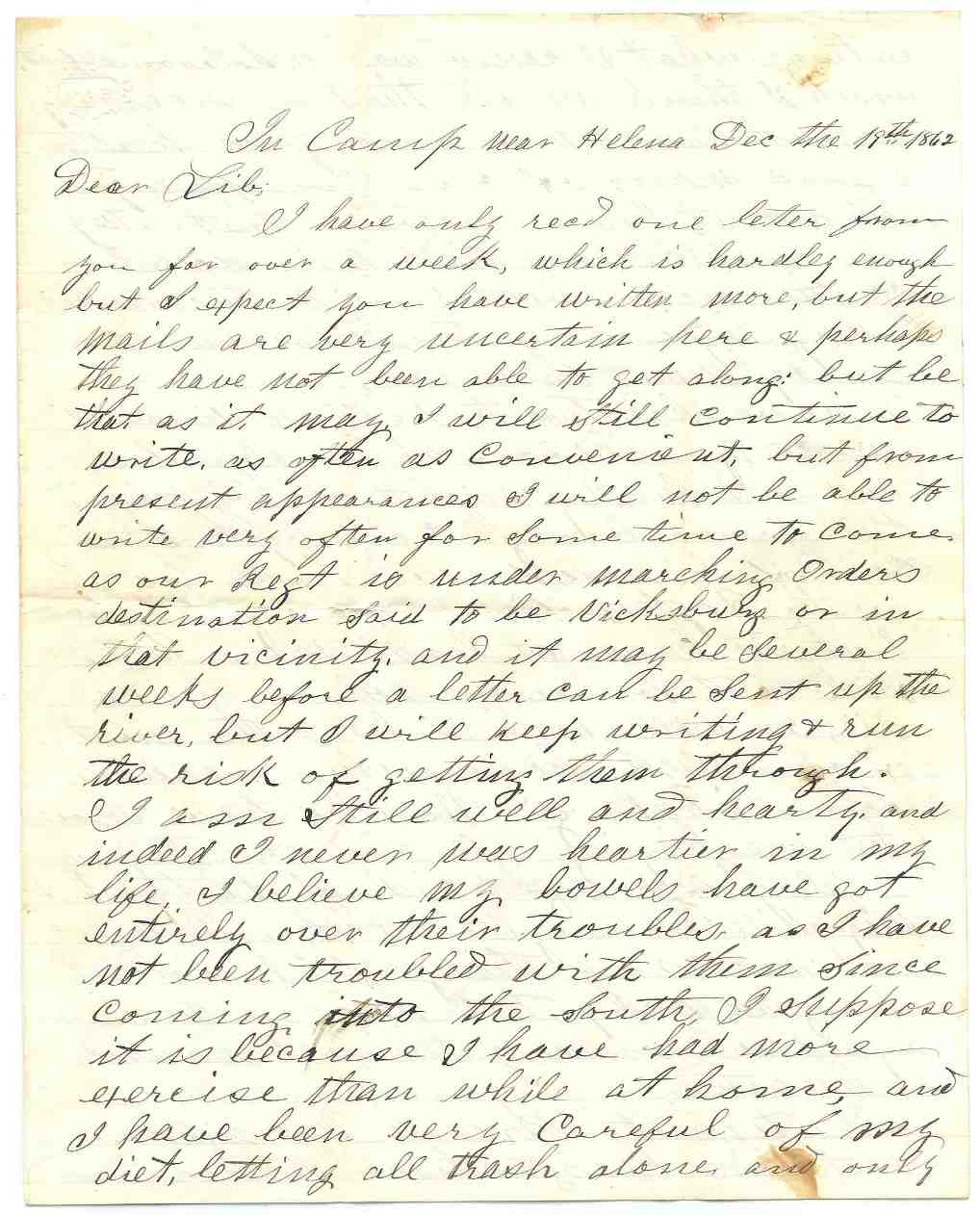 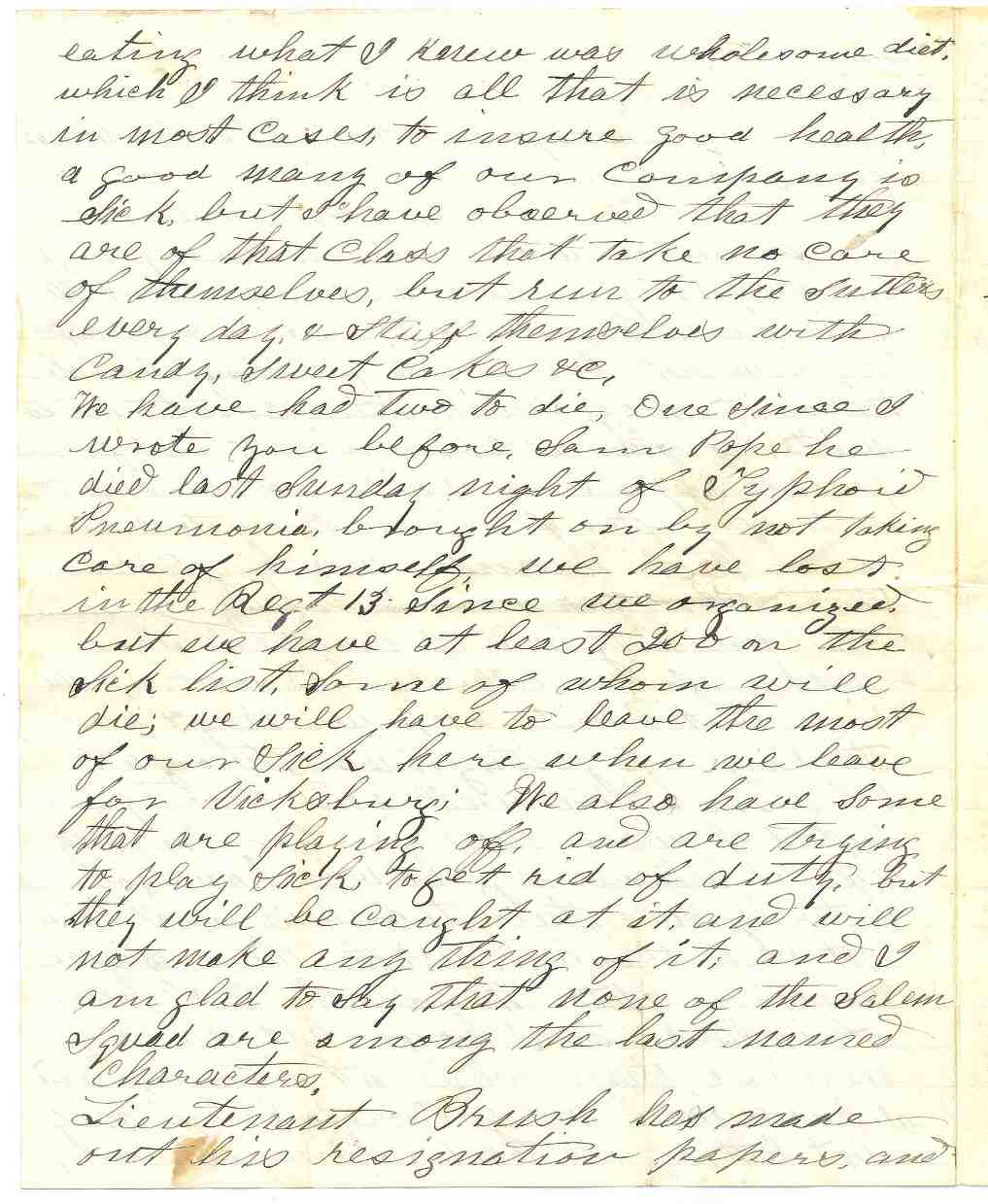 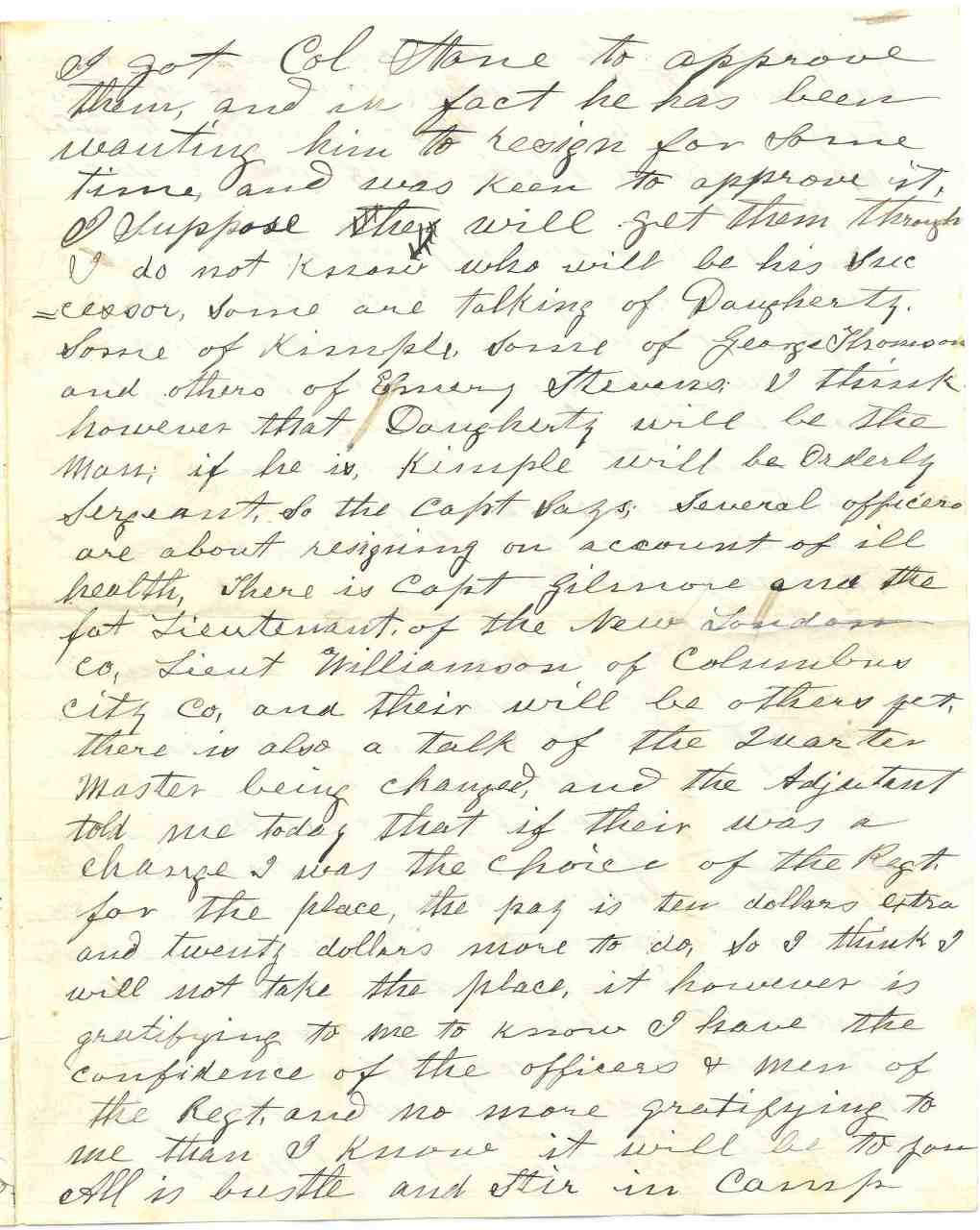 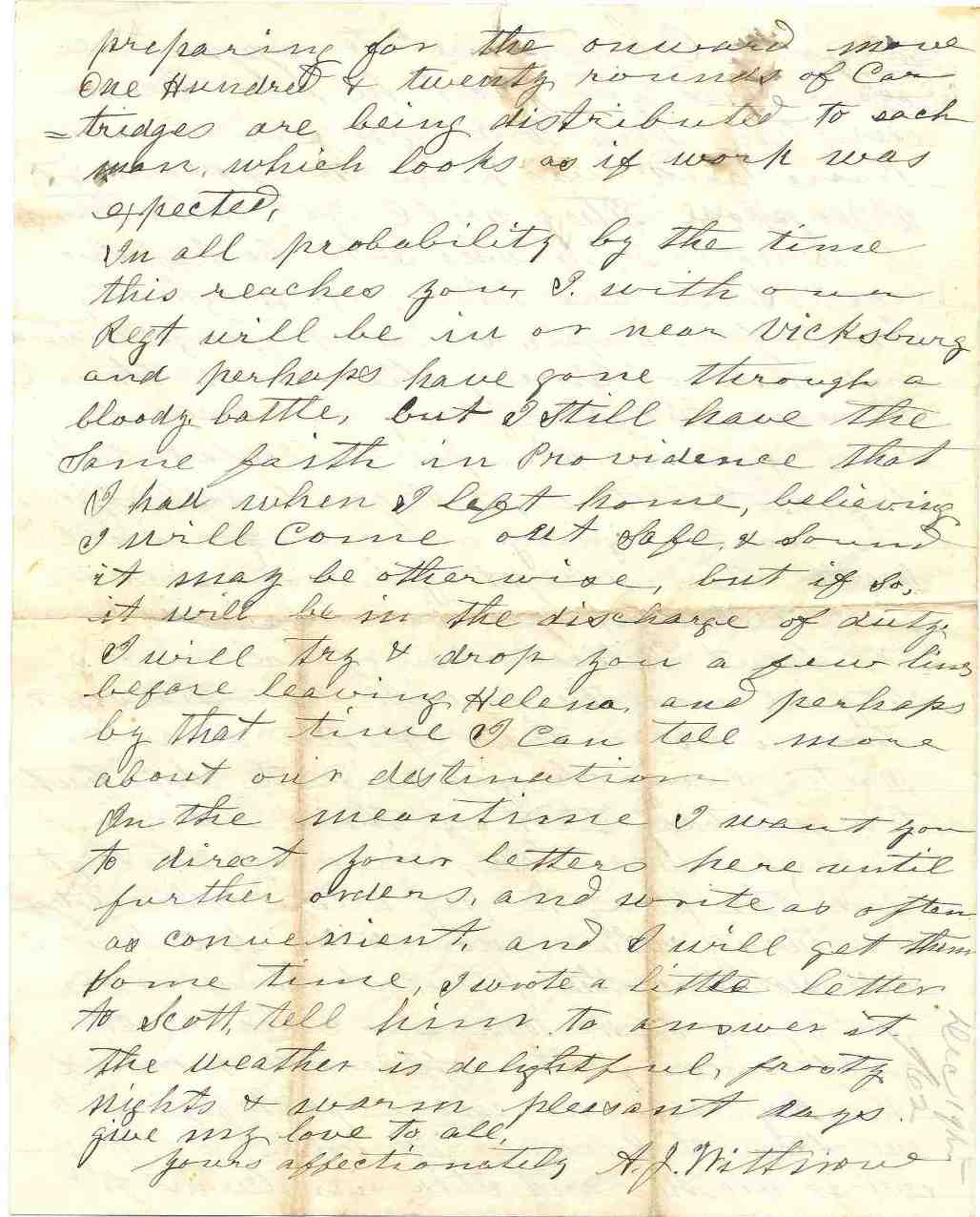 I have only recd one letter from you for over a week, which is hardly enough but I expect you have written more, but the mails are very uncertain here & perhaps they have not been able to get along; but be that as it may, I will still continue to write, as often as convenient, but from present appearances I will not be able to write very often for some time to come as our Regt is under marching orders destination said to be Vicksburg or in that vicinity, and it may be several weeks before a letter can be sent up the river, but I will keep writing & run the risk of getting them through.

I am still well and hearty, and indeed I never was heartier in my life. I believe my bowels have got entirely over their troubles as I have not been troubled with them since coming into the South, I suppose it is because I have had more exercise than while at home, and I have been very careful of my diet, letting all trash alone and only eating what I knew was wholesome diet, which I think is all that is necessary in most cases to insure good health, a good many of our Company is sick, but I have observed that they are of that class that take no care of themselves, but run to the Sutler every day, & stuff themselves with candy, sweet cakes, &c.

We have had two to die, one since I wrote you before, Sam Pope he died last Sunday night of Typhoid Pneumonia, brought on by not taking care of himself, we have lost in the Regt 13 since we organized, but we have at least 200 on the sick list, some of whom will die; we will have to leave the most of our sick here when we leave for Vicksburg; We also have some that are playing off, and are trying to play sick to get rid of duty, but t hey will be caught at it, and will not make any string of it; and I am glad to say that none of the Salem Squad are among the last named characters.

Lieutenant Brush has made out his resignation papers, and I got Col Stone to approve them, and in fact he has been wanting him to resign for some time, and was keen to approve it, I suppose he will get them through I do not know who will be his successor, some are talking of Daugherty, some of Kimple, some of George Thomson and others of Emery Stevens; I think however that Daugherty will be the man; if he is, Kimple will be Orderly Sergeant, so the Capt says; Several officers are about resigning on account of ill health, there is Capt Gilmore and the fat Lieutenant, of the New London Co, Lieut Williamson of Columbus City Co, and their will be others yet, there is also talk of the Quarter Master being changed, and the Adjutant told me today that if their was a change I was the choice of the Regt. for the place, the pay is ten dollars extra and twenty dollars more toe do, so I think I will not take the place, it however is gratifying to me to know I have the confidence of the officers & men of the Regt. and no more gratifying to me than I know it will be to you All is bustle and stir in camp preparing for the onward move one hundred & twenty rounds of cartridges are being distributed to each man, which looks as if work was expected.

In all probability by the time this reaches you I with our Regt will be in or near Vicksburg and perhaps have gone through a bloody battle, but I still have the same faith in Providence that I had when I left home, believing I will come out safe & sound it may be otherwise, but if so, it will be in the discharge of duty. I will try & drop you a few lines before leaving Helena and perhaps by that time I can tell more about our destination

In the meantime I want you to direct your letters here until further orders, and write as often as convenient, and I will get them some time, I wrote a little letter to Scott, tell him to answer it. The weather is delightful, frosty nights & warm pleasant days give my love to all,