Posted on 4 Jan ’13 by Biff Hollingsworth

More about Jeremy Francis Gilmer:
Jeremy Francis Gilmer was born in Guilford County, N.C., on 23 February 1818. He entered the United States Army as a Second Lieutenant of Engineers in July 1839 after graduating from the United States Military Academy. He continued as an United States Army Engineer, constructing fortifications and conducting surveys until 1861, when he resigned in support of the southern cause. In September 1861, Gilmer was appointed Major of Engineers in the Confederate States of America Army and served as Chief Engineer of the staff of General A. S. Johnston until the general’s death at the battle of Shiloh on 6 April 1862, where Gilmer was also severely wounded.

After his recovery, Gilmer served for a short time with the Army of Northern Virginia. On 9 August 1862, he was assigned to the Office of Chief of Engineer Bureau in Richmond, Va., and promoted to the rank of Colonel of Engineers. Promoted to Major General on 20 August 1863, Gilmer was ordered to Charleston, S.C., to direct the defense of the city. He returned to Richmond in June 1864, where he directed the Engineer Bureau until the end of the War. In the fall of 1865, Gilmer was elected a director of the Georgia Central Railroad and later served as president pro tem. In 1866, he was elected president of the Savannah Gas-Light Company, an office he held along with director, Georgia Central Railroad, until his death on 1 December 1883. 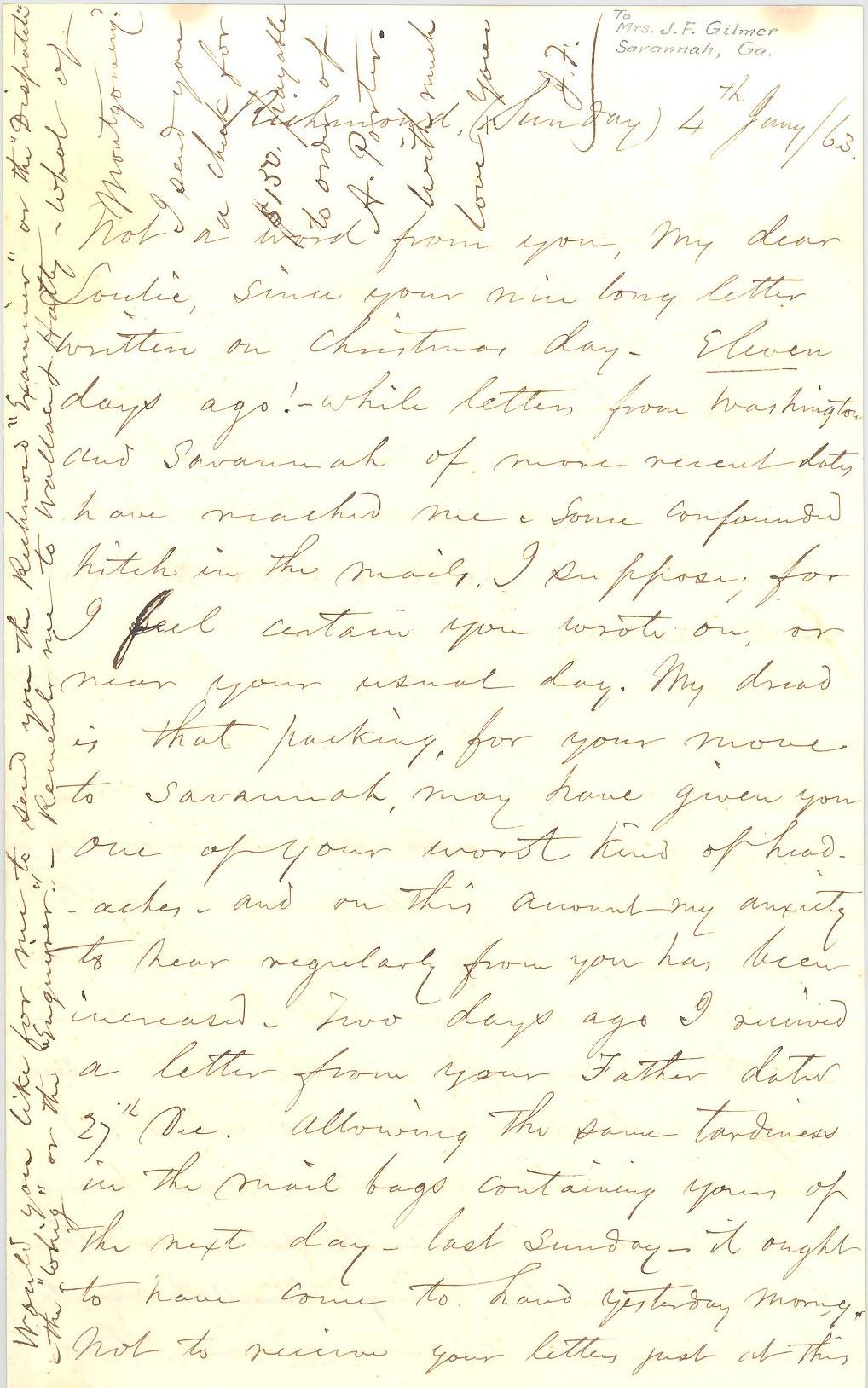 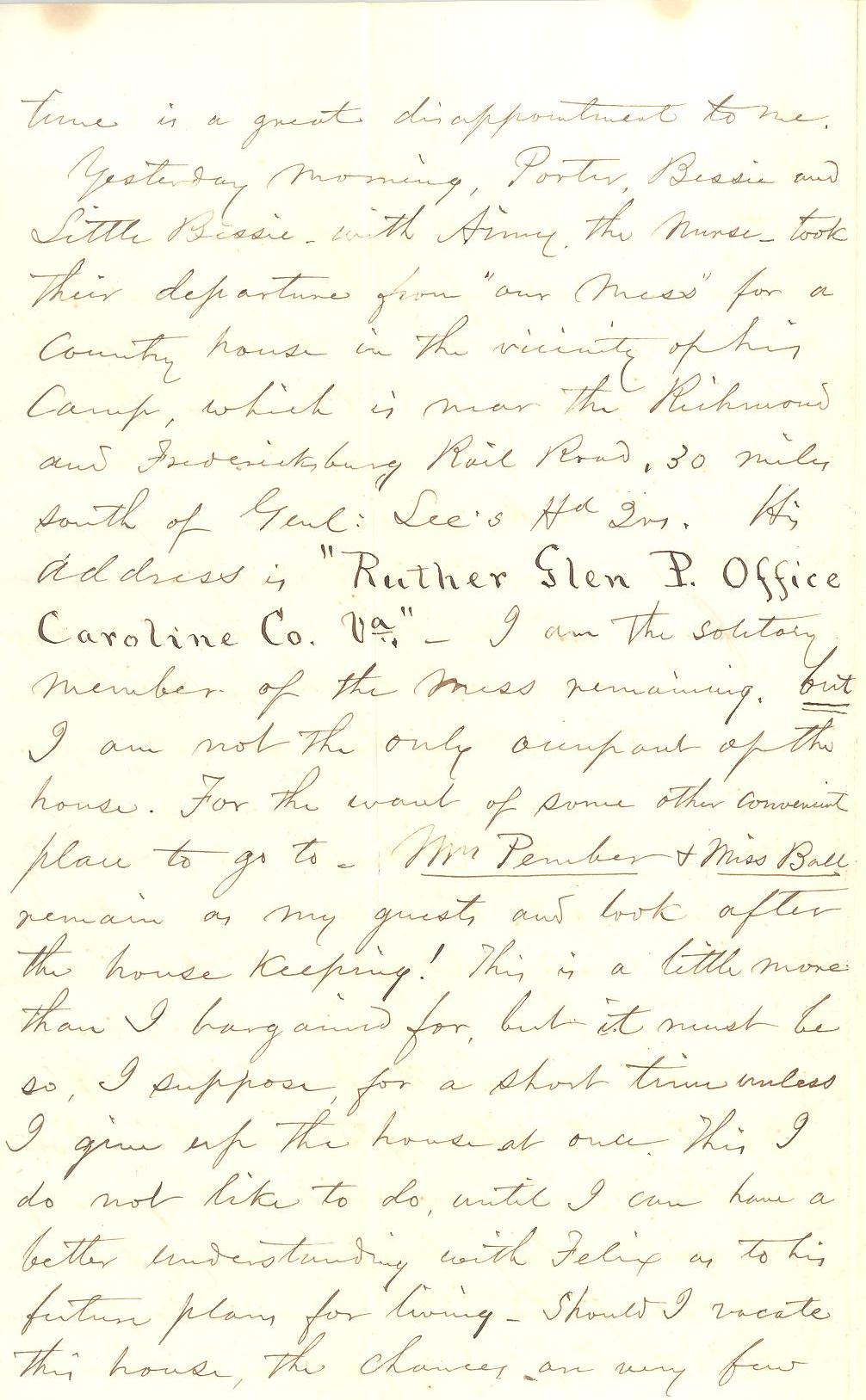 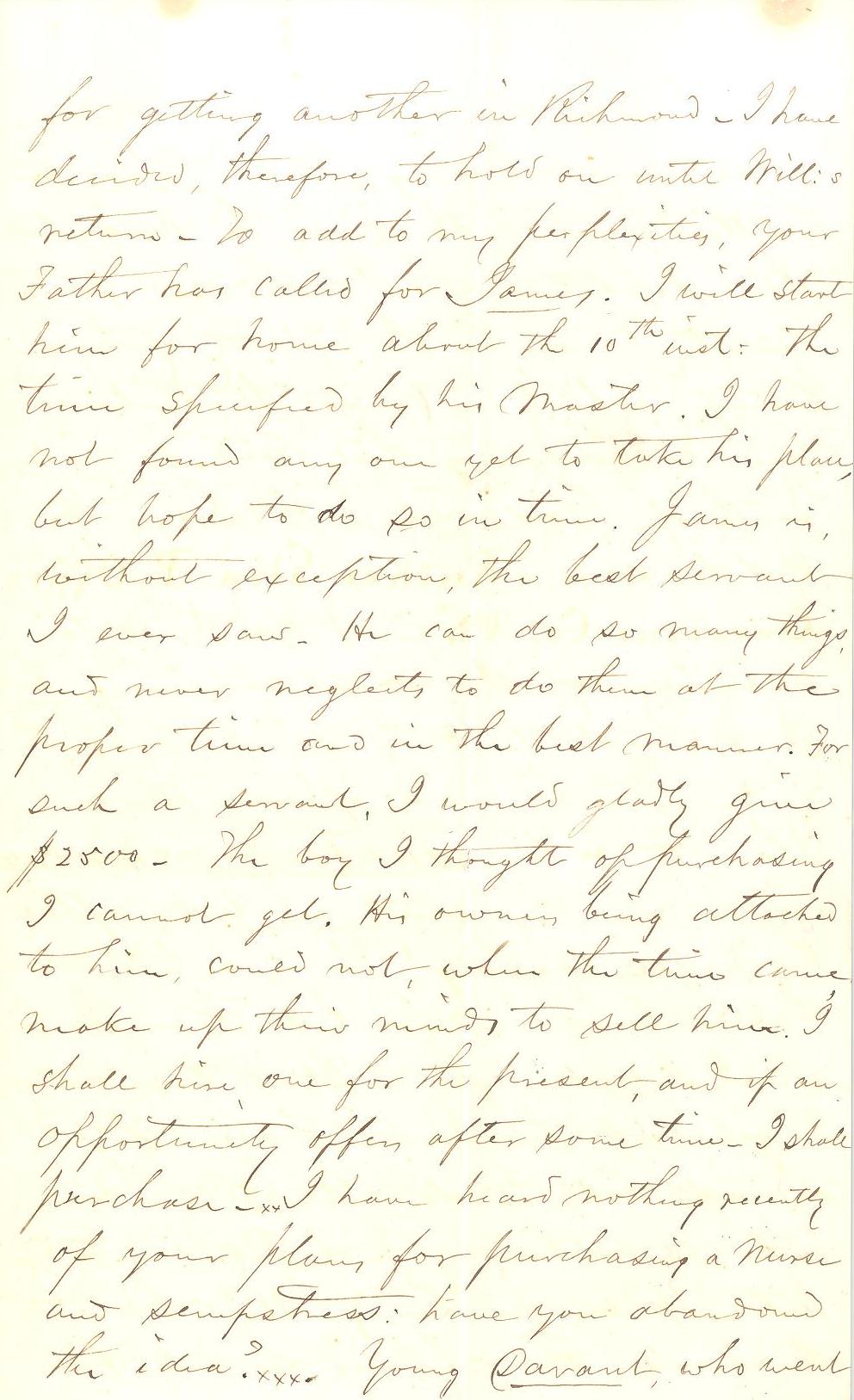 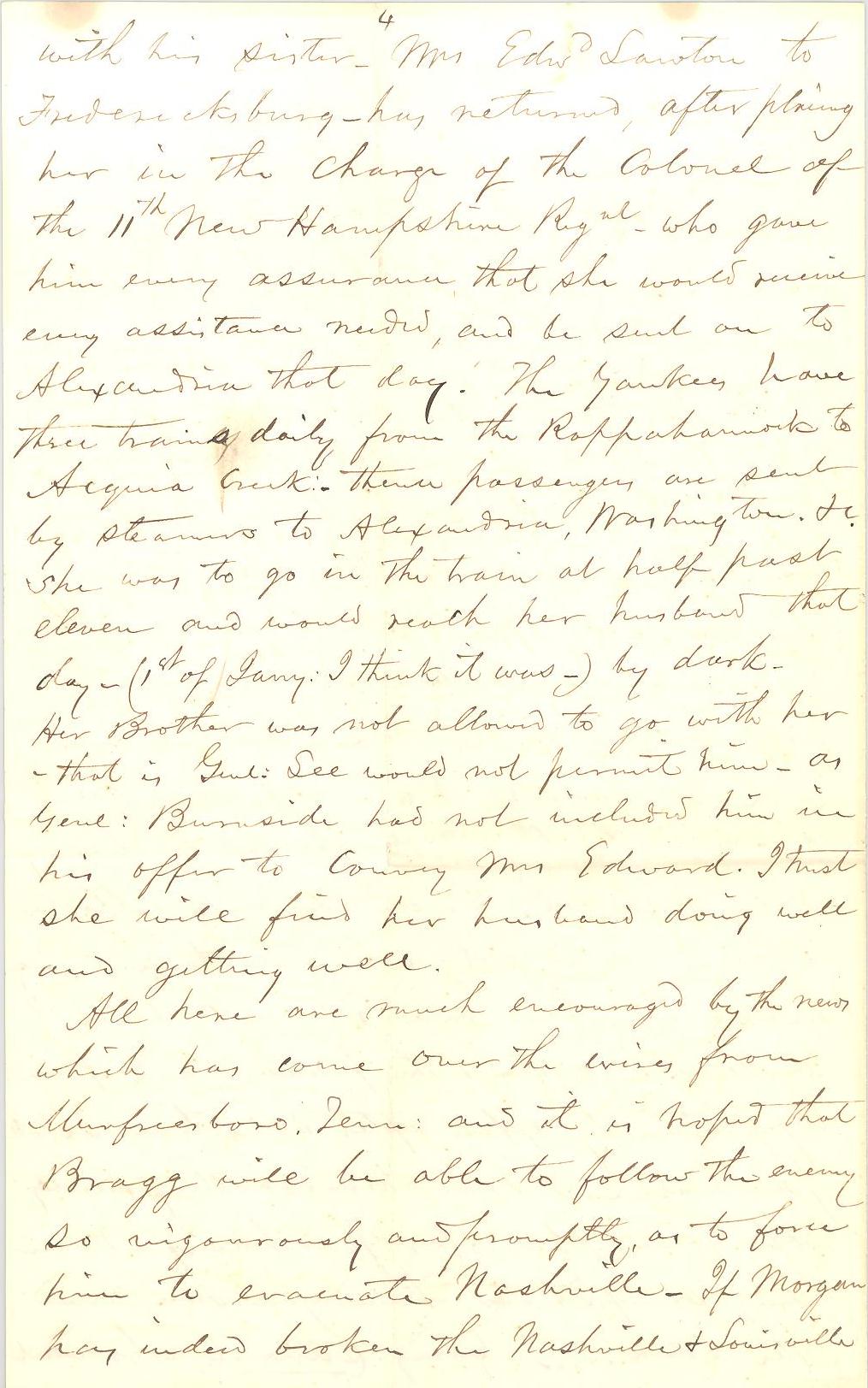 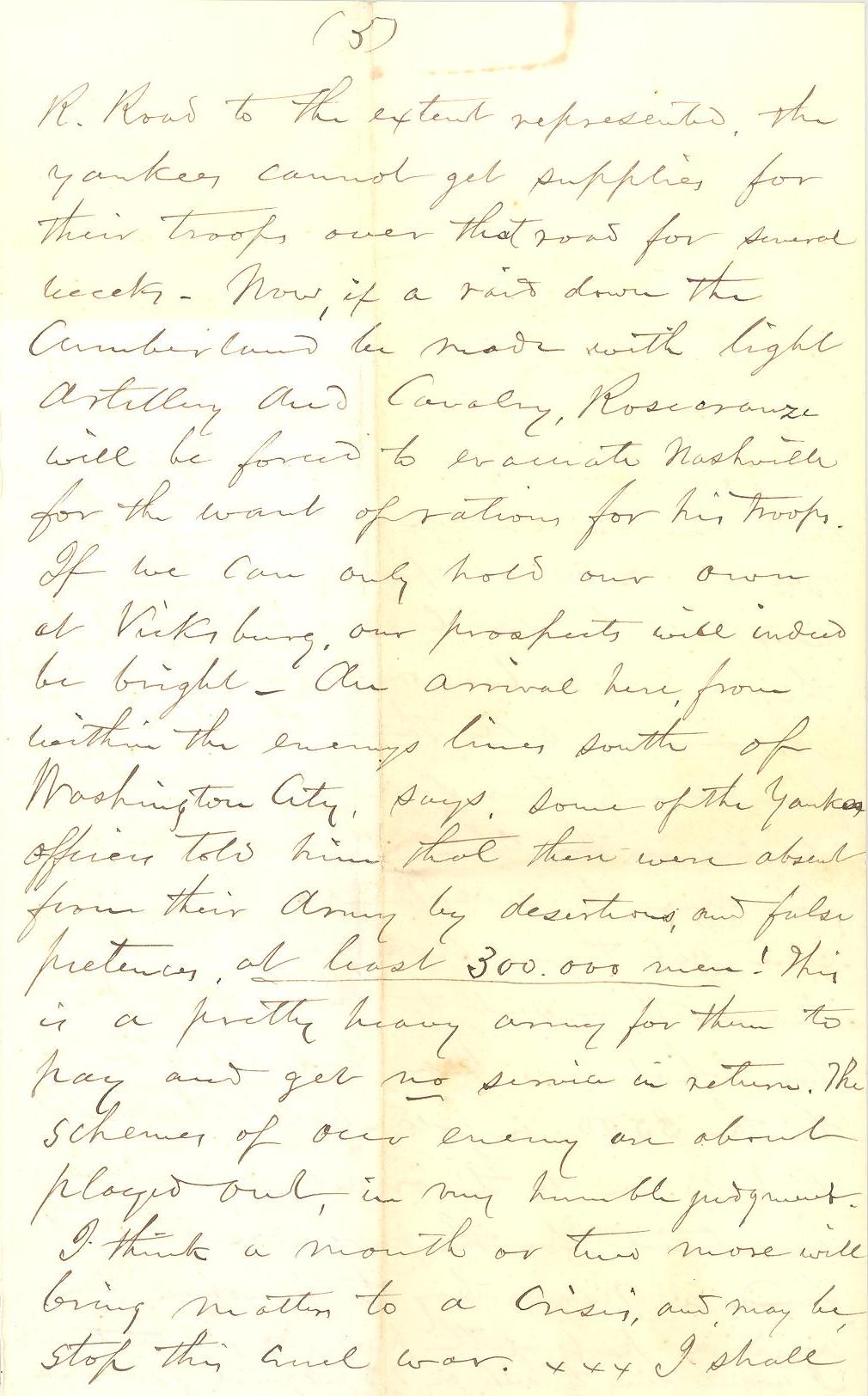 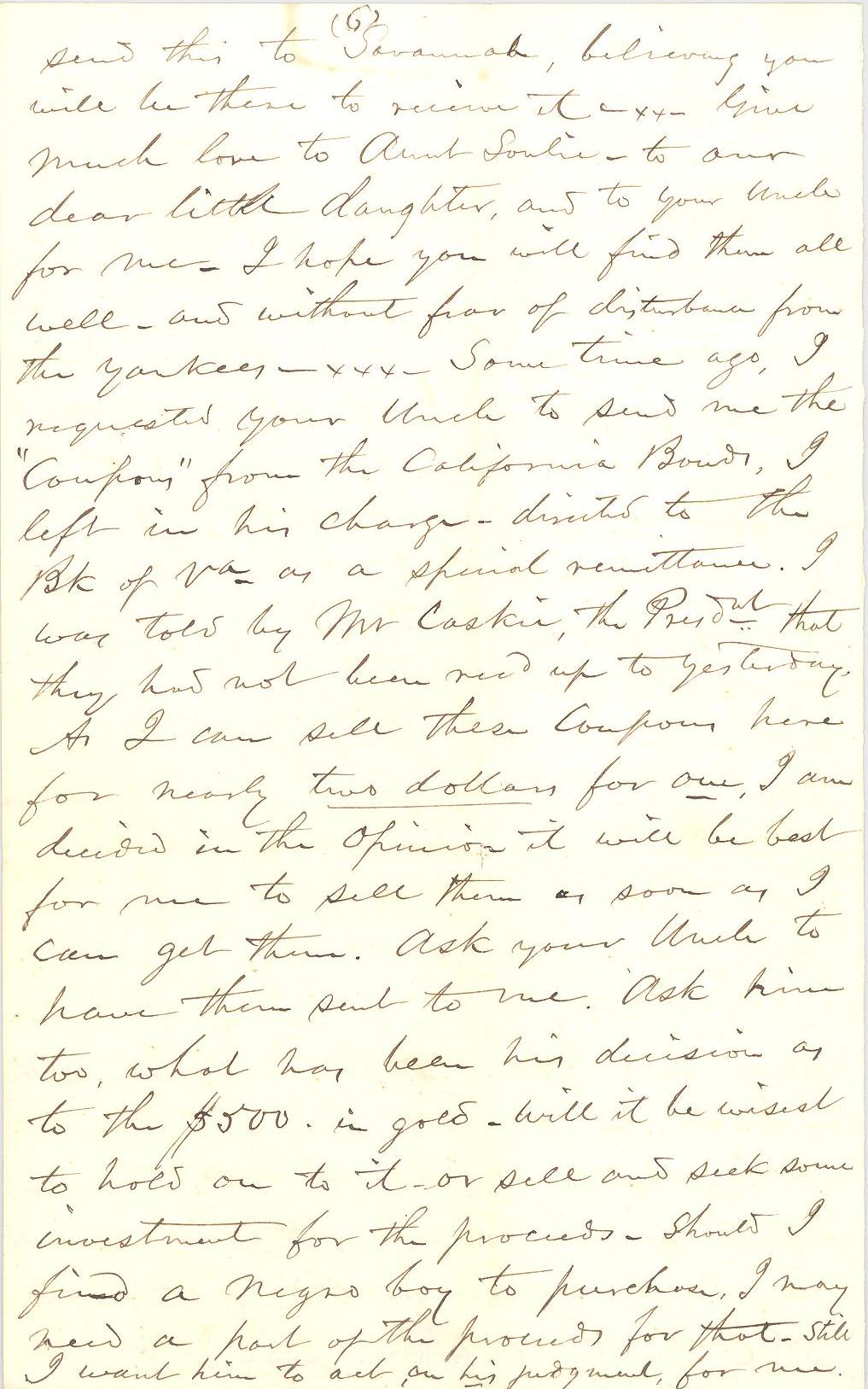 Not a word from you, my dear Loulie, since your nice long letter written on Christmas day – eleven days ago! While letters from Washington and Savannah of more recent dates have reached me. Some confounded hitch in the mails, I suppose, for I feel certain you wrote on, or near your usual day. My dread is that packing for your move to Savannah may have given you one of your worst kind of headaches, and on this account my anxiety to hear regularly from you has been increased. Two days ago I received a letter from your Father dated 27th Dec. allowing the same tardiness in the mail bags containing yours of the next day – last Sunday – it ought to have come to hand yesterday morning. Not to receive your letters just at this time is a great disappointment to me.

Yesterday morning, Porter, Bessie and Little Bessie, with Amy the Nurse, took their departure from “our mess” for a country house in the vicinity of his camp, which is near the Richmond and Fredericksburg Rail Road, 30 miles south of Genl. Lee’s Hd Qrs. His address is “Ruther Glen P. Office Caroline Co. Va.”. I am the solitary member of the mess remaining, but I am not the only occupant of the house. For the want of some other convenient place to go to, Mrs. Pember & Miss Ball remain as my guests and look after the house keeping! This is a little more than I bargained for, but it must be so, I suppose, for a short time unless I give up the house at once. This is do not like to do, until I can have a better understanding with Felix as to his future plans for living. Should I vacate this house, the chances are very few for getting another in Richmond. I have decided, therefore, to hold on until Will’s return. To add to my perplexities, your Father has called for James. I will start him for home about the 10th inst. the time specified by his Master. I have not found any one yet to take his place, but hope to do so in time. James is, without exception, the best servant I ever saw. He can do so many things, and never neglects to do them at the proper time and in the best manner. For such a servant, I would gladly give $2500. The boy I thought of purchasing I cannot get. His owner being attached to him, could not, when the time came make up their minds to sell him. I shall hire one for the present, and if an opportunity offers after some time – I shall purchase.  I have heard nothing recently of your plans for purchasing a nurse and seamstress. have you abandoned the idea?  Young Davant[?], who went with his sister, Mrs. Edwd. Lawton to Fredericksburg, has returned, after placing her in the charge of the Colonel of the 11th New Hampshire Regnt. – who gave him every assurance that she would receive every assistance needed, and be sent on to Alexandria that day. The Yankees have three trains daily from the Rappahannock to Acquia Creek. Thence passengers are sent by steamers to Alexandria, Washington, etc. She was to go in the train at half past eleven and would reach her husband that day. (1st of Jany. I think it was.) by dark. Her Brother was not allowed to go with her – that is Genl. Lee would not permit him – as Genl. Burnside had not included him in his offer to convey Mrs. Edward. I trust she will find her husband doing well and getting well.

All here are much encouraged by the news which has come over the lines from Murfreesboro, Tenn. and it is hoped that Bragg will be able to follow the enemy so vigourously and promptly, as to force him to evacuate Nashville. If Morgan has indeed broken the Nashville & Louisville R. Road to the extent represented, the Yankees cannot get supplies for their troops over that road for several weeks. Now, if a raid down the Cumberland be made with light artillery and cavalry, Rosencranze will be forced to evacuate Nashville for the want of rations for his troops. If we can only hold our own at Vicksburg, our prospects will indeed be bright. An arrival here, from within the enemy’s lines south of Washington City, says, some of the Yankee officers told him that then were absent from their army by desertions, and false pretences, at least 300,000 men! This is a pretty heavy army for them to pay and get no service in return. The schemes of our enemy are about played out, in my humble judgment. I think a month or two more will bring matters to a crisis, and, may be, stop this cruel war.

I shall send this to Savannah, believing you will be there to receive it.

Give much love to Aunt Loulie – to our dear little daughter, and to your Uncle for me. I hope you will find them all well – and without fear of disturbance from the Yankees.

Some time ago, I requested your Uncle to send me the “Coupons” from the California Bonds, I left in his charge – directed to the Bk. of Va. as a special remittance. I was told by Mr. Caskie[?], the Presdnt. that they had not hence recd. up to yesterday. As I can sell these coupons here for nearly two dollars for one, I am decided in the opinion it will be best for me to sell them as soon as I can get them. Ask your Uncle to have them sent to me. Ask him too, what has been his decision as to the $500 in gold. Will it be wisest to hold on to it, or sell and seek some investment for the proceeds. Should I find a negro boy to purchase, I may need a part of the proceeds for that. Still I want him to act, on his judgment, for me.

Would you like for me to send you the Richmond “Examiner” or the “Dispatch” – the “Whig” or the “Enquirer”. Remember me to Wallace and Hatty. What of Montgomery? I send you a check for $150, payable to A. Porter.

With much love, yours,