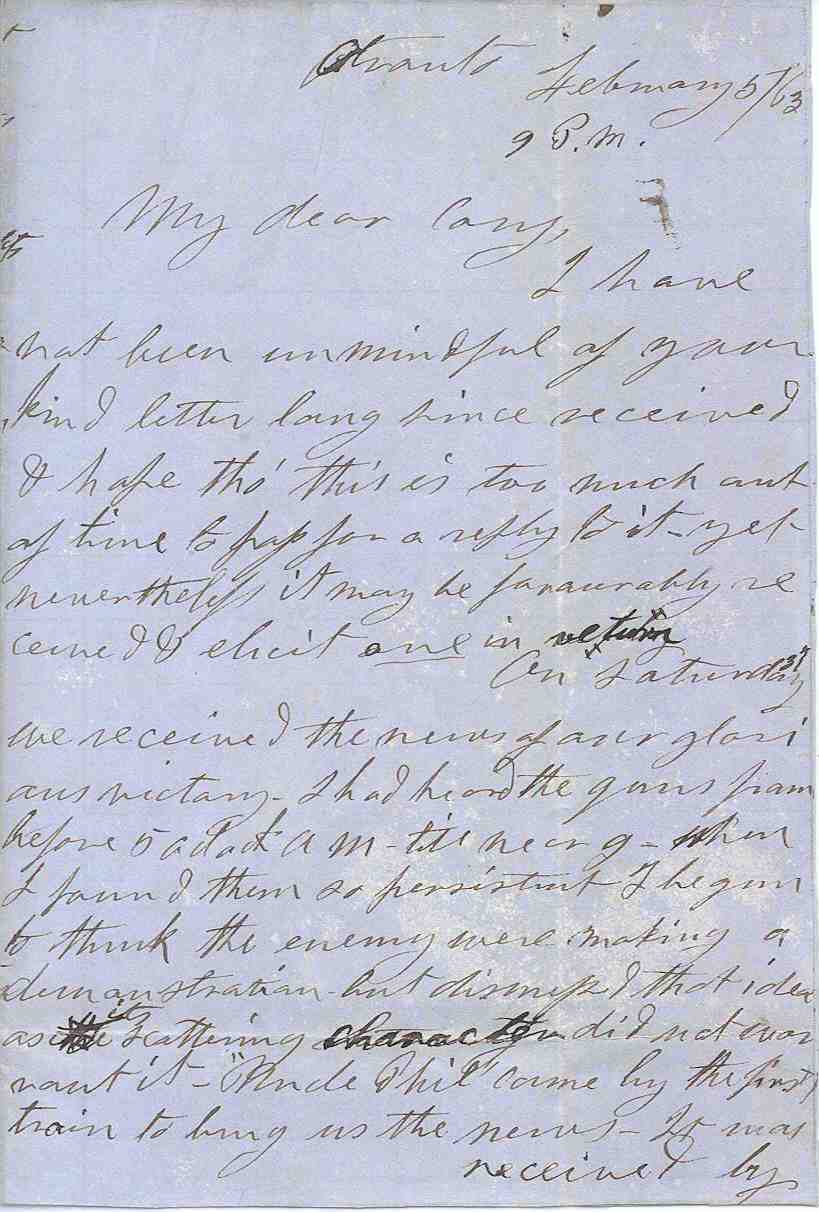 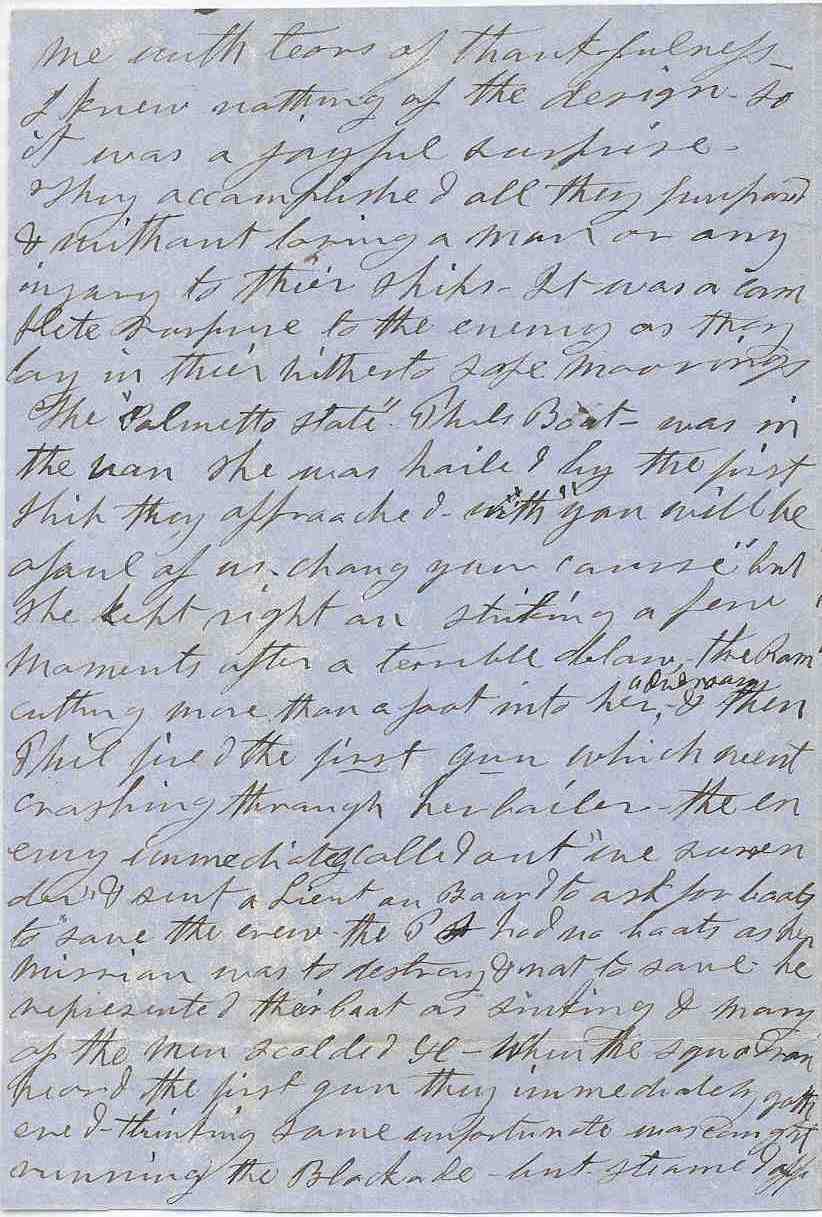 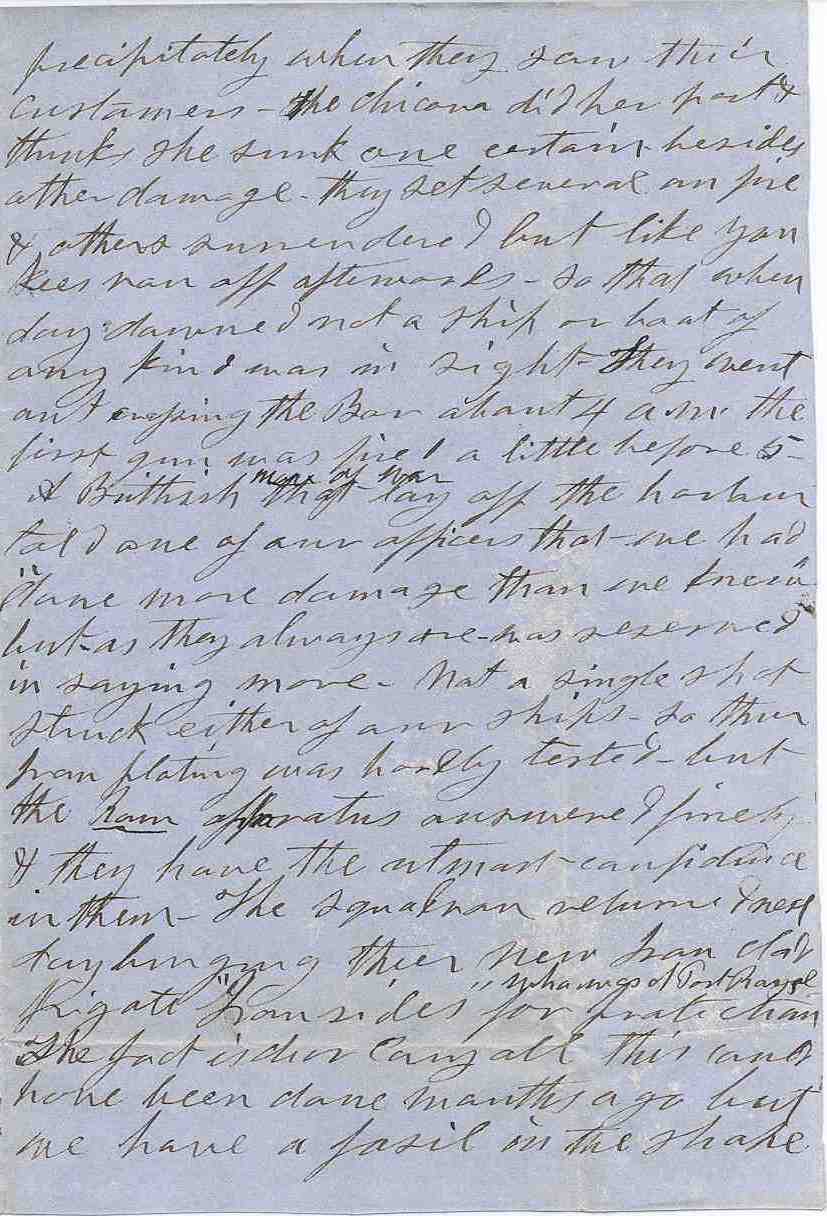 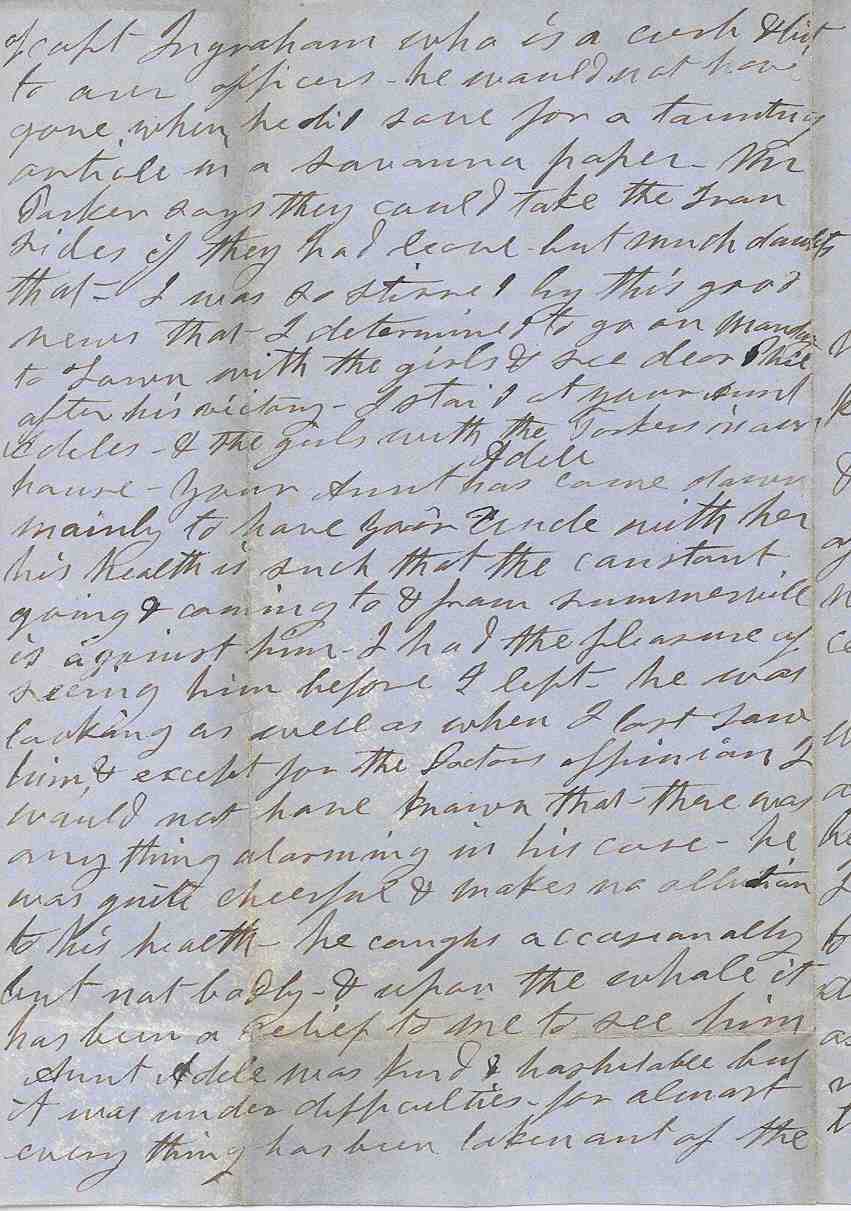 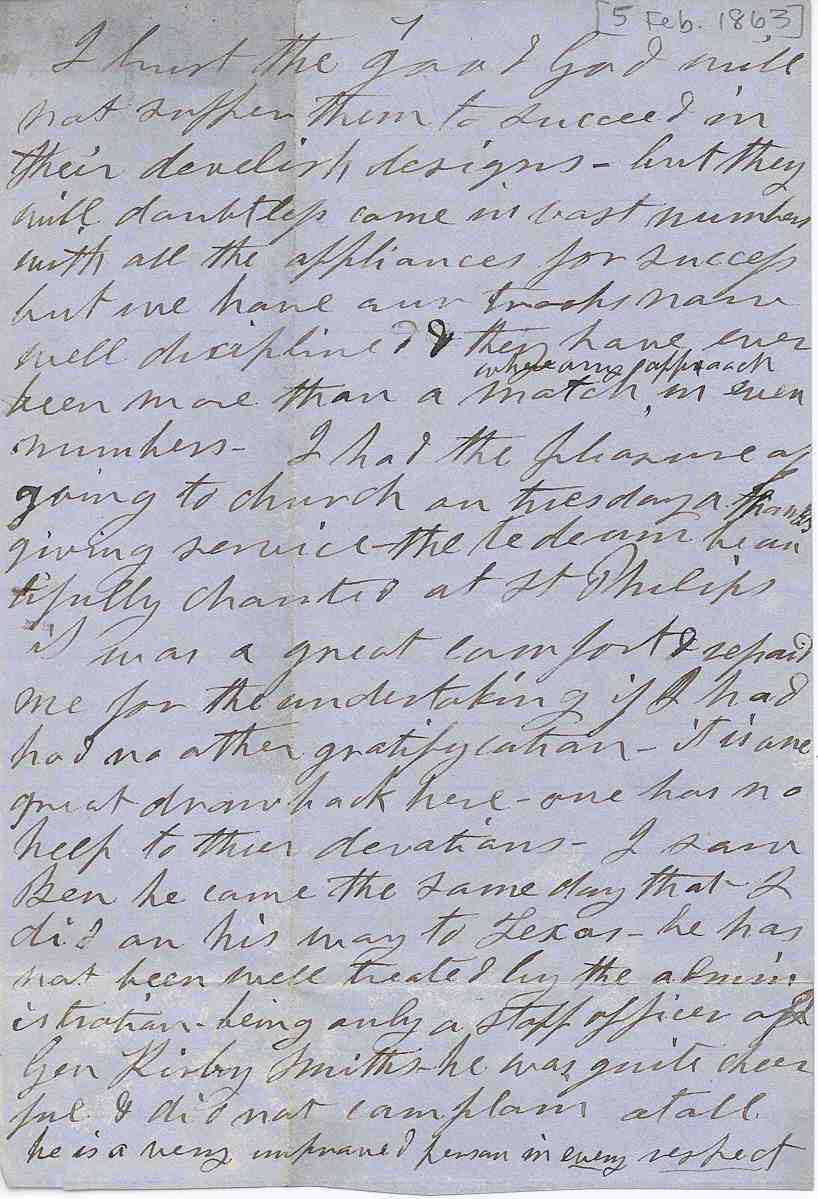 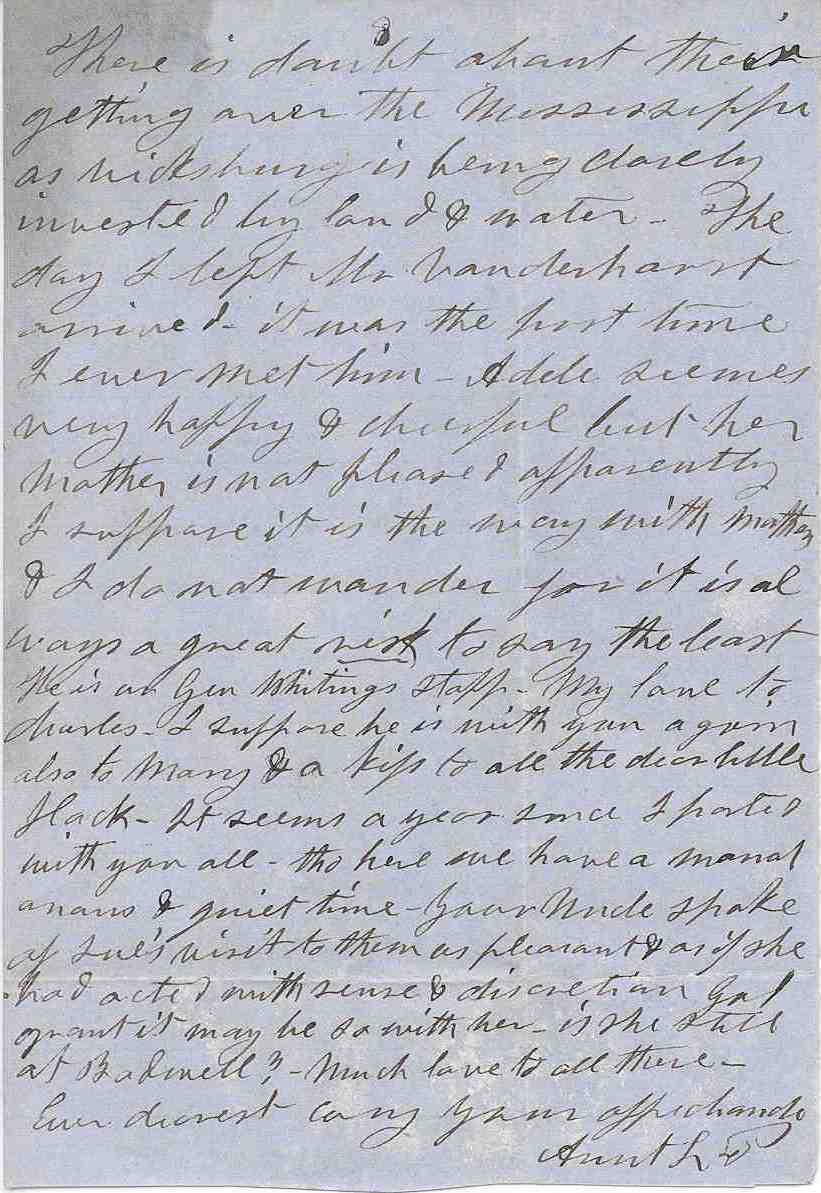 I have not been unmindful of your kind letter long since received and hope tho’ this is too much out of time to pass for a reply to it – yet nevertheless it may be favourably received & elicit one in return.
On Saturday 31 we received the news of our glorious victory. I had heard the guns from before 5 a clock am till near 9 – when I found them so persistent I began to think the enemy were making a demonstration – but dismissed that idea as its scattering character did not war-rant it – “Uncle Phil” came by the first train to bring us the news.  It was received by me with tears of thankfulness – I knew nothing of the design so it was a joyful surprise & they accomplished all they purposed & without losing a man or any injury to their ships.  It was a com-plete surprise to the enemy as they lay in their hitherto safe moorings.
The “Palmetto State” Phils Boat – was in the ran she was hailed by the first ship they approached with “you will be afoul of us chang your course” but she kept right on striking a few moments after a terrible blow, the Ram cutting more than a foot into her adversary & then Phil fired the first gun which went crashing through her bailer- the enemy immediately called out “we surrender” & sent a Lieut. on Board to ask for boats to “save the crew – the P S had no boats as her mission was to destroy & not to save – he represented their boat as sinking & many of the men scalded [?]. When the squadron heard the first gun they immediately gathered – thinking some unfortunate was caught running the Blockade – but steamed off precipitately when they saw their [custamers?].  The Chicora did her part & thinks she sunk one certain besides other damage.  They set several on fire & others surrendered but like Yan-kees ran off afterwards – so that when day dawned not a ship or boat of any kind was in sight. They went out crossing the Bar about 4 am. The first gun was fired a little before 5.
A Brittish man of war that lay off the harbor told one of our officers that one had “done more damage than we knew” but – as they always are – has reserved in saying more.  Not a single shot struck either of our ships, so their Iron plating was hardly tested – but the Ram apparatus answered finely and they have the utmost confidence in them.  The squadron returned next day bringing their new iron clad frigate “Ironsides” [?] Port Royal for [?]. The fact is dear Cary all this could have been done months ago but we have a fosil in the shape of Capt. Ingraham who is a curb & bit to our officers – he would not have gone when he did save for a taunting article in a Savanna paper.  Mr. Parker says they could take the Iron Sides if they had leave but much doubts that – I was so stirred by this good news that I determined to go on Monday to town with the girls & see dear Phil after his victory – I staid at your Aunt Adeles – & the girls with the Parkers in our house- your Aunt Adele has come down mainly to have your Uncle with her – his health is such that the constant going & coming to & from Summerville is against him.  I had the pleasure of seeing him before I left – he was looking as well as when I last saw him & except for the Doctor’s oppinion I would not have known that there was anything alarming in his case.  He was quite cheerful & makes no allusion to his health – he coughs occasionally but not badly & upon the whole it has been a relief to me to see him. Aunt Adele was kind & hospitable but it was under difficulties – for almost every thing has been taken out of the

I trust the good God will not suffer them to succeed in their devilish designs, but they will doubtless come in vast numbers with all the appliances for success but we have our troops now well disciplined & they have ever been more than a match where any approach in even numbers.  I had the pleasure of going to church on Tuesday a Thanksgiving service – the te deum beautifully chanted at St. Philip’s it was a great comfort & repaid one for the undertaking if I had no other gratifycation – it is one great drawback here – one has no help to their devotions.  I saw Ben he came the same day that I did on his way to Texas – he has not been well treated by the admin-istration being only a staff officer of Gen. Kirby Smith’s.  He was quite cheerful and did not complain at all.  He is a very [improved?] person in every respect.

There is doubt about their getting over the Mississippi as Vicksburg is being closely invested by land and water.  The day I left Mr. Vanderhorst arrived – it was the first time I ever met him.  Adele seems very happy and cheerful but her mother is not pleased apparently.  I suppose it is the way with mothers & I do not wonder for it is al-ways a great risk to say the least.  He is on Gen. Whitings staff.  My love to Charles.  I suppose he is with you again also to Mary & a kiss to all the dear little flock.  It seems a year since I parted with you all – tho here we have a monotonous & a quiet time.  Your Uncle spake of Sue’s last visit to them as pleasant & as if she had acted with sense and discretion.  God grant it may be so with her – is she still at Badwell? Much love to all there –
Ever dearest Cary your affectionate
Aunt Lou

More about this item: This letter demonstrates the perception of this attack as a victory by the Confederacy.  As E.B. Long describes the event in The Civil War Day By Day, “the Confederates took the victory to mean a lifting of the blockade and so declared to foreign powers. But the blockade was not really broken, despite the temporary interruption.” (Long, E. B. (1971). The Civil War Day By Day. New York, NY: Da Capo Press, Inc.)