9 February 1863: “I was particularly edified by a Pocahontas in a low necked white mans lin saving the life of Captain Smith, (C.S. Uniform) from Powhatan gorgeously arrayed in Masonic regalia and feathers”

Posted on 9 Feb ’13 by Biff Hollingsworth

Item Description: Letter, 9 February 1863, from Benjamin Lewis Blackford to his mother, Mary B. Blackford, discussing events in Richmond. The Blackford family was a prominent, although not wealthy, Virginia family. 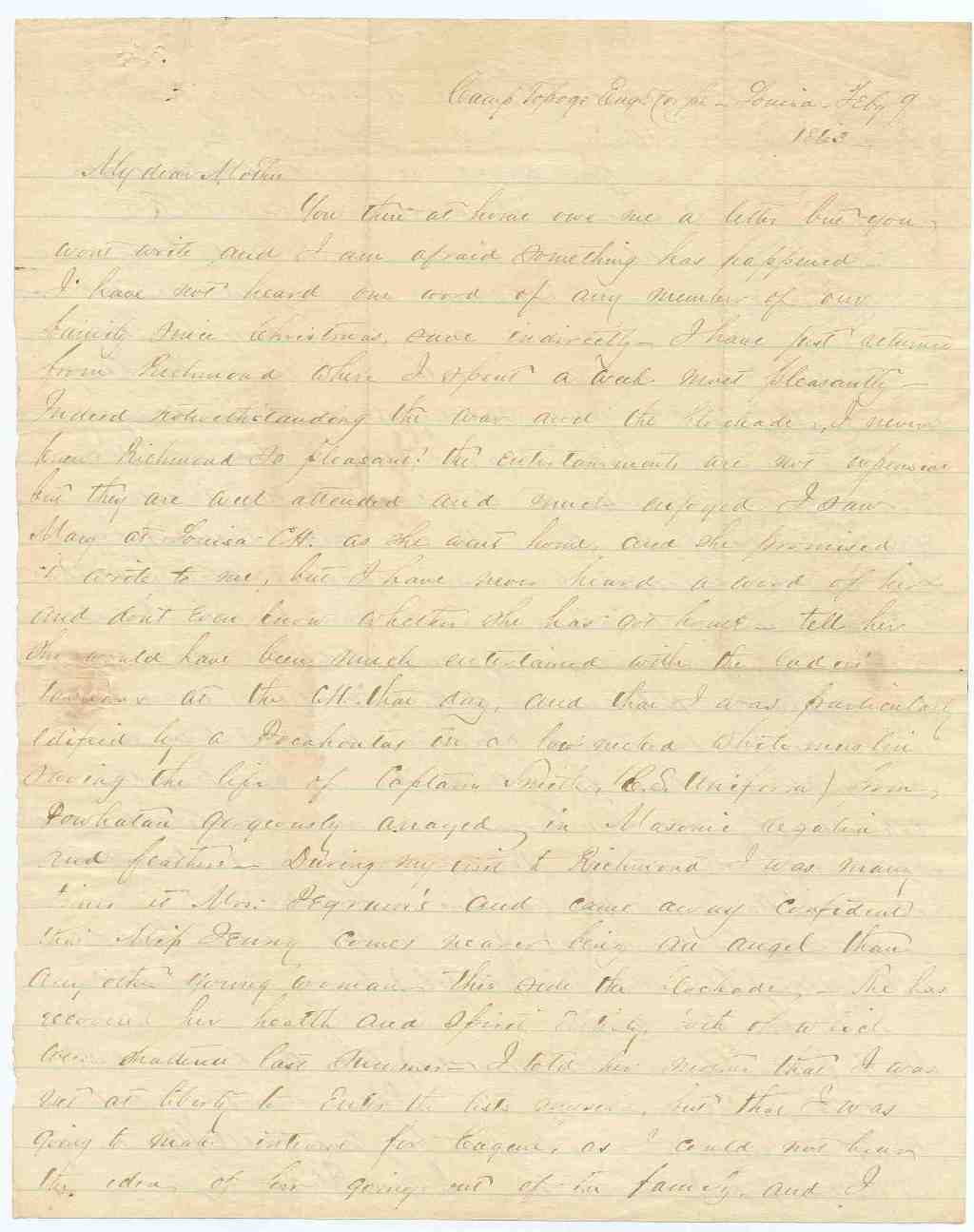 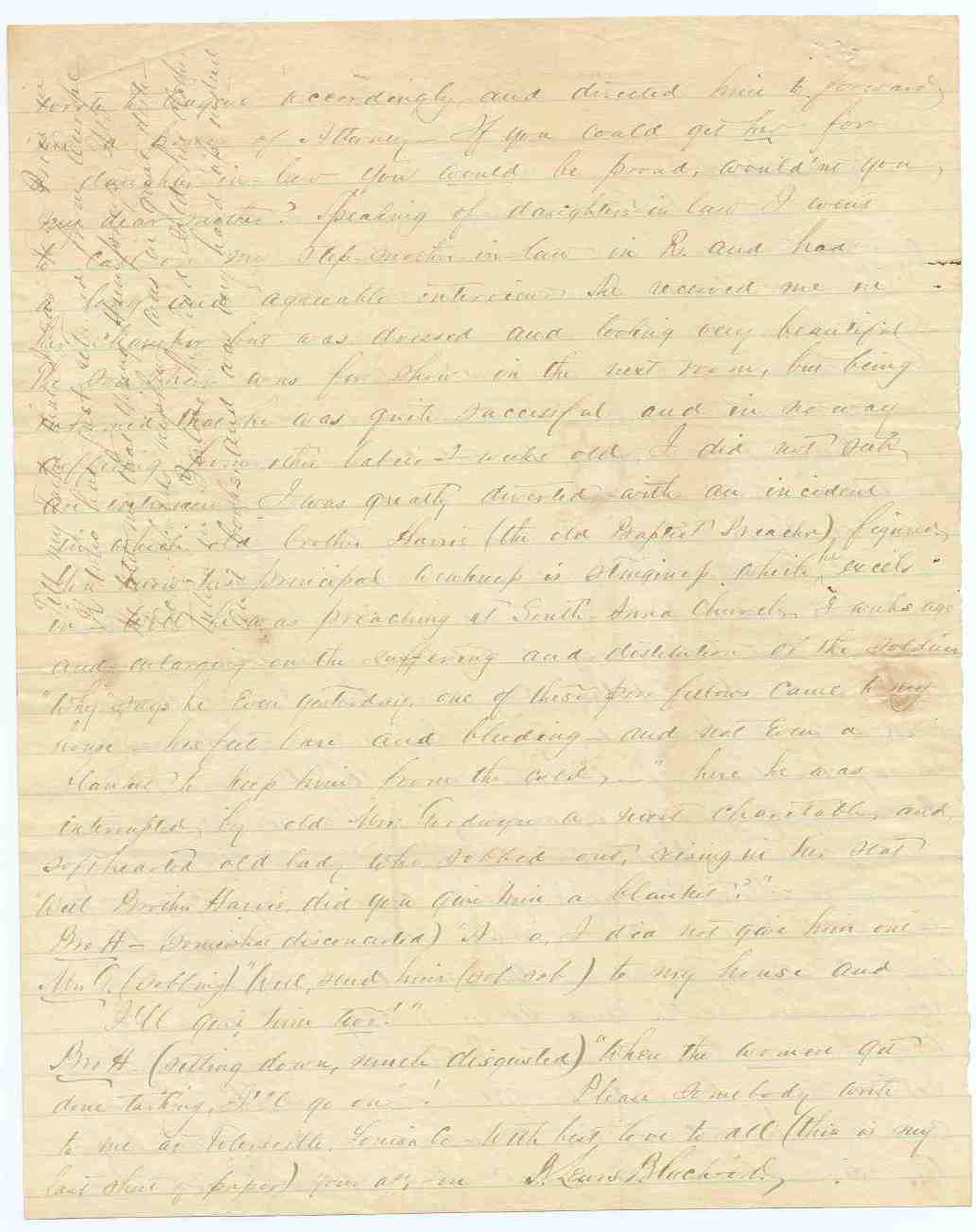 You there at home owe me a letter but you wont write and I am afraid something has happened. I have not heard one word of any member of our family since Christmas, save indirectly. I have just returned from Richmond where I spent a week most pleasantly. Indeed notwithstanding the war and the blockade. I never knew Richmond so pleasant.; the Entertainments are not expensive but they are well attended and much enjoyed. I saw May at Louisa CH. as she went home, and she promised to write to me, but I have never heard a word of her and dont even know whether she has got home. tell her  She would have been much entertained with the ladies’  Tableaux at the CH. that day, and that I was particularly edified by a Pocahontas in a low necked white mans lin saving the life of Captain Smith, (C.S. Uniform) from Powhatan gorgeously arrayed in Masonic regalia and feathers. During my visit to Richmond I was many times at Mrs. Pegram’s and came away confident that Miss Jenny comes nearer being an angel than any other young woman this side the blockade. She has recovered her health and spirit entirely, both of which were Shattered last summer. I told her mother that I was not at liberty to … the lists myself but that I was going to make interest for [Eugene?], as I could not bear the idea of going out of the family, and I wrote to Eugene accordingly and directed him to forward me a power of Attorney. If you could get her for a daughter -in-law you could be proud, would’nt you, my dear mother? Speaking of daughters-in-law I went to call on my step-mother-in-law in R. and had a long and agreeable interview. She received me in her chamber but was dressed and looking very beautiful. The son & heir was for show in the next room, but being informed that he was quite successful and in no way differing from other babies 2 weeks old, I did not seek an interview. I was greatly diverted with an incident in which old brother Harris (the old Baptist Preacher) figured. You know his principal … is stinginess, which he excels in. Well he was preaching at South Anna Church 3 weeks ago and … on the suffering and destitution of the soldier “Why” says he “even yesterday, one of these poor fellows came to my house, his feet bare and bleeding, and not even a blanket to keep him from the cold.” here he was interrupted by old Mrs. Goodwyn a most charitable and soft-hearted old lady who sobbed out, rising in her seat “Well Brother Harris, did you give him a blanket?”
Bro H– (somewhat disconcerted) “N-o, I did not give him one-
Mrs. G (sobbing) “Well send him (sob sob) to my house and I’ll give him two!”
Bro H– (sitting down, much disgusted) “When the women get done talking I’ll go on”!    Please somebody write to me at [Tolersville?], Louisa Co. With best love to all (this is my last sheet of paper) your aff. son B. Lewis Blackford

Tell my father that I saw … Price in R. who has just returned from Europe. he told me that Young Humprey, Mr. [Schoolfield?]’s nephew was in great destitution in … his had sold his clothes and books and was very hard up indeed.