11 February 1863: “I find myself disappointed upon inquiring as the the efficiency of the artificial legs, and will have to make up my mind to be a worse cripple than I had hoped for.”

Posted on 11 Feb ’13 by Biff Hollingsworth 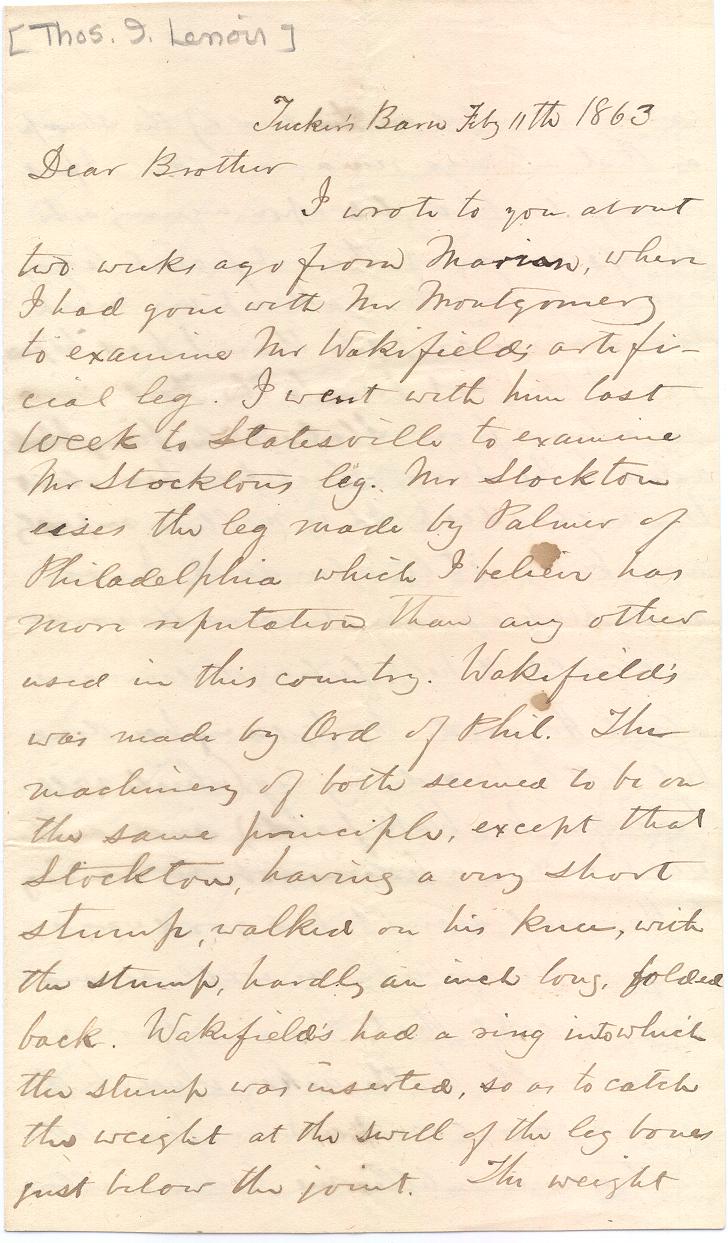 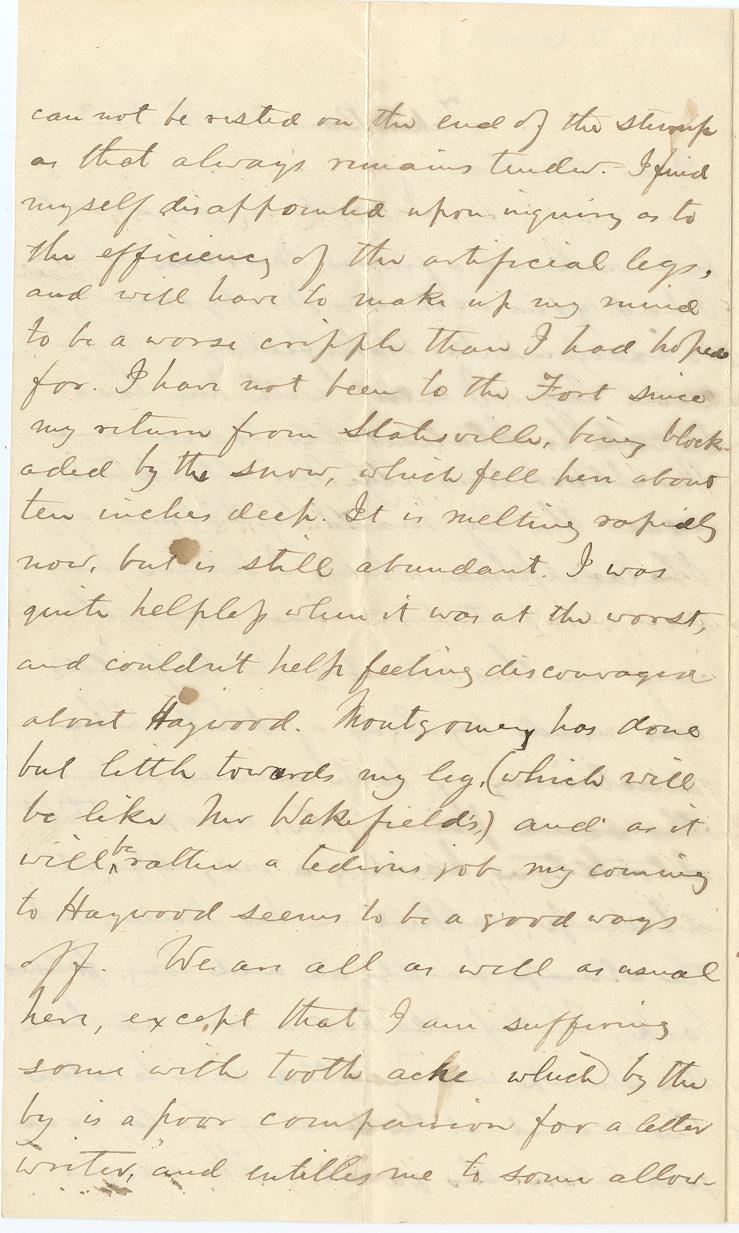 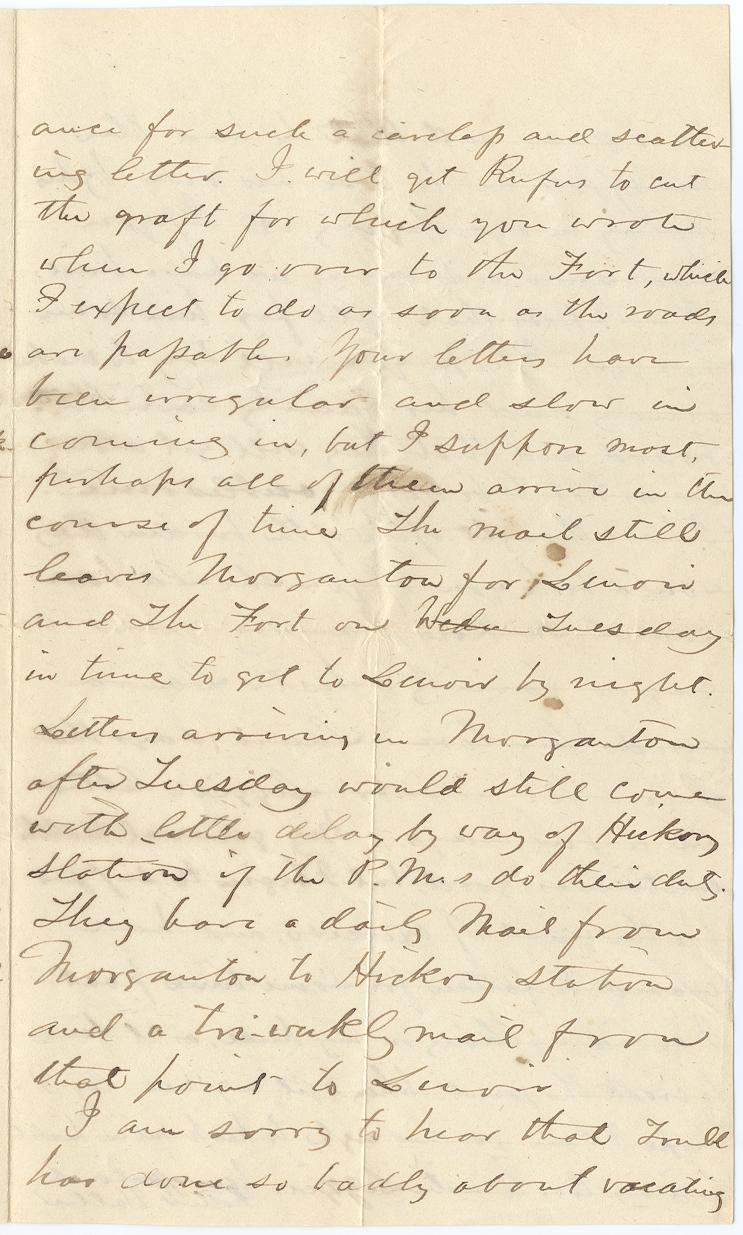 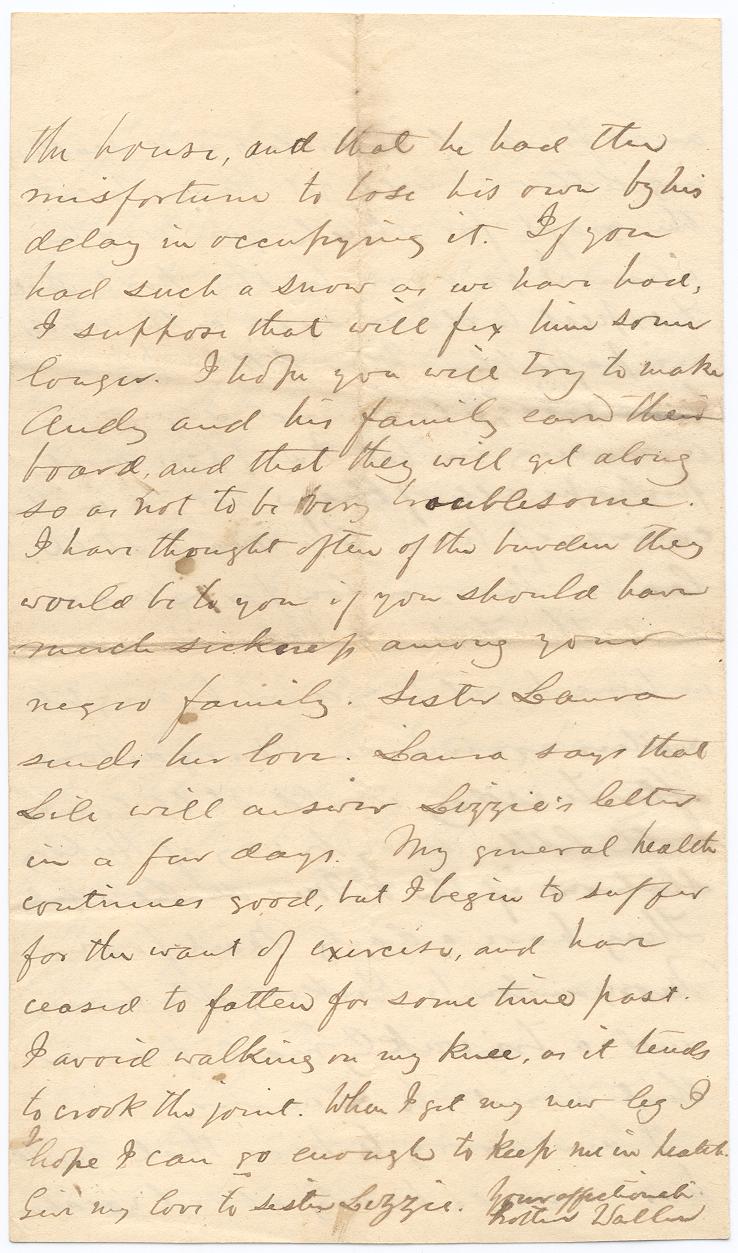 I wrote to you about two weeks ago from Marion, where I had gone with Mr. Montgomery to examine Mr. Wakefield’s artificial leg. I went with him last week to Statesville to examine Mr. Stockton’s leg. Mr. Stockton uses the leg made by Palmer of Philadelphia which I believe has more reputation than any other used in this country. Wakefield’s was made by Ord. of Phil. The machinery of both seemed to be on the same principal, except that Stockton, having a very short stump, walked on his knee, with the stump, hardly an inch long, folded back. Wakefield’s had a ring into which the stump was inserted, so as to catch the weight at the swell of the leg bones just below the joint. The weight can not be rested on the end of the stump as that always remains tender. I find myself disappointed upon inquiring as the the efficiency of the artificial legs, and will have to make up my mind to be a worse cripple than I had hoped for. I have not been to the Fort since my return form Statesville, being blockaded by the snow, which fell here about ten inches deep. It is melting rapidly now, but is still abundant. I was quite helpless when it was at the worst, and couldn’t help feeling discouraged about Haywood. Montgomery has done but little towards my leg (which will be like Mr. Wakefield’s) and as it will be rather a tedious job my coming to Haywood seems to be a good ways off. We are all as well as usual here, except that I am suffering some with tooth ache which by the by is a poor companion for a letter writer, and entitles me to some allowance for such a careless and scattering letter. I will get Rufus to cut the graft for which you wrote when I go over to the Fort, which I expect to do as soon as the roads are passable. Your letters have been irregular and slow in coming in, but I suppose most, perhaps all of them arrive in the course of time. The mail still leaves Morganton for Lenoir and the Fort on Tuesday in time to get to Lenoir by night. Letters arriving in Morganton after Tuesday would still come with little delay by way of Hickory Station if the P.M.’s do their duty. They have a daily mail from Morganton to Hickory station and a tri-weekly mail from that point to Lenoir.

I am sorry to hear that [?] has done so badly about vacating the house, and that he had the misfortune to lose his own by his delay in occupying it. If you had such a snow as we have had, I suppose that will fix him some longer. I hope you will try to make Andy and his family earn their board, and that they will get along so as not to be very troublesome. I have thought often of the burden they would be to you if you should have much sickness among your negro family. Sister Laura sends her love. Laura says that [L?] will answer Lizzie’s letter in a few days. My general health continues good, but I begin to suffer for the want of exercise, and have ceased to fatten for some time past. I avoid walking on my knee, as it tends to crook the joint. When I get my new leg I hope I can go enough to keep me in health. Give my love to sister Lizzie.