26 February 1863: “Many a time have I, when I would awake in a puddle of water, console myself with the reflection that some one else was in a worse fix than myself, and with a shout and a laugh we would make merry over the misfortunes of each other.”

Posted on 26 Feb ’13 by Biff Hollingsworth 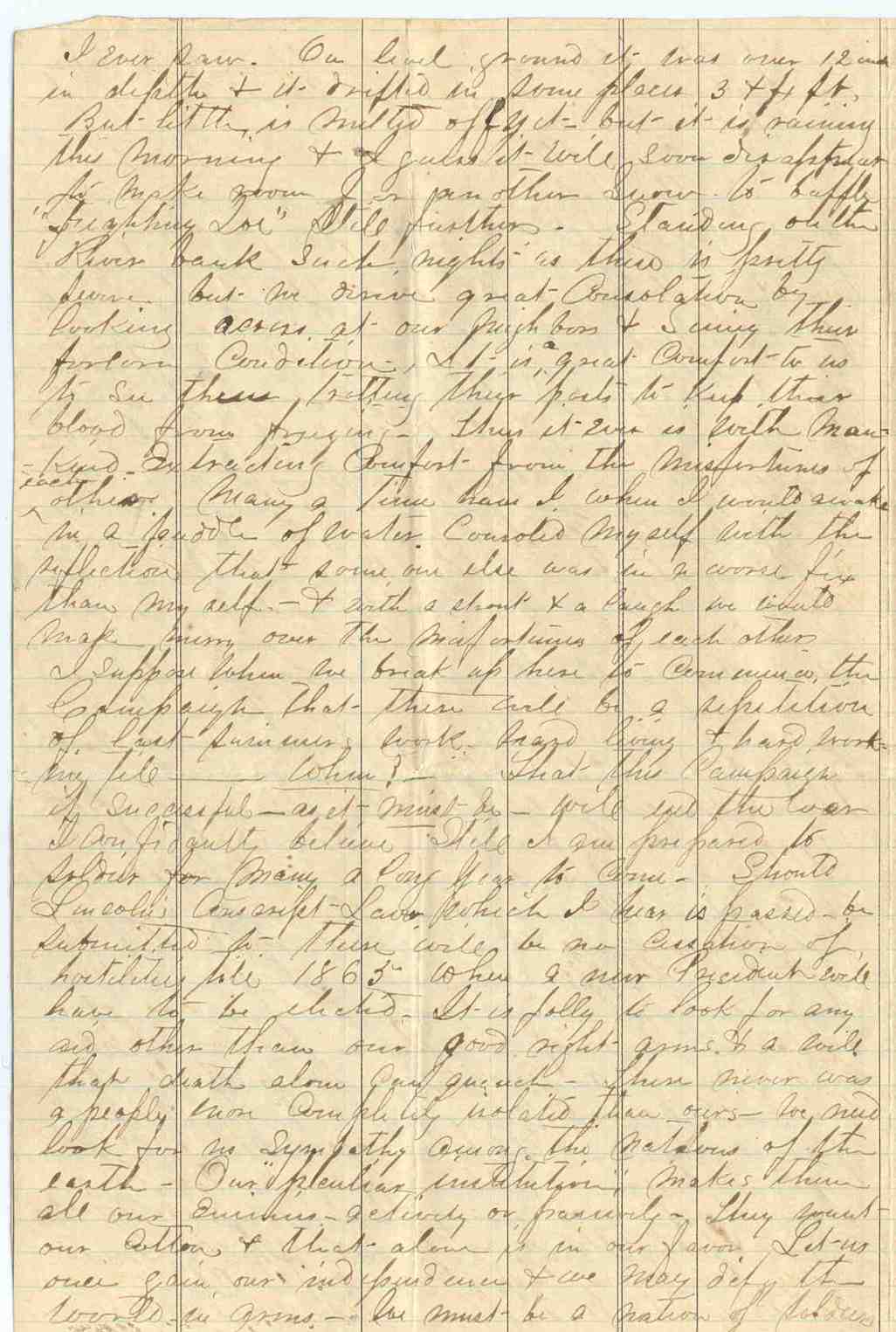 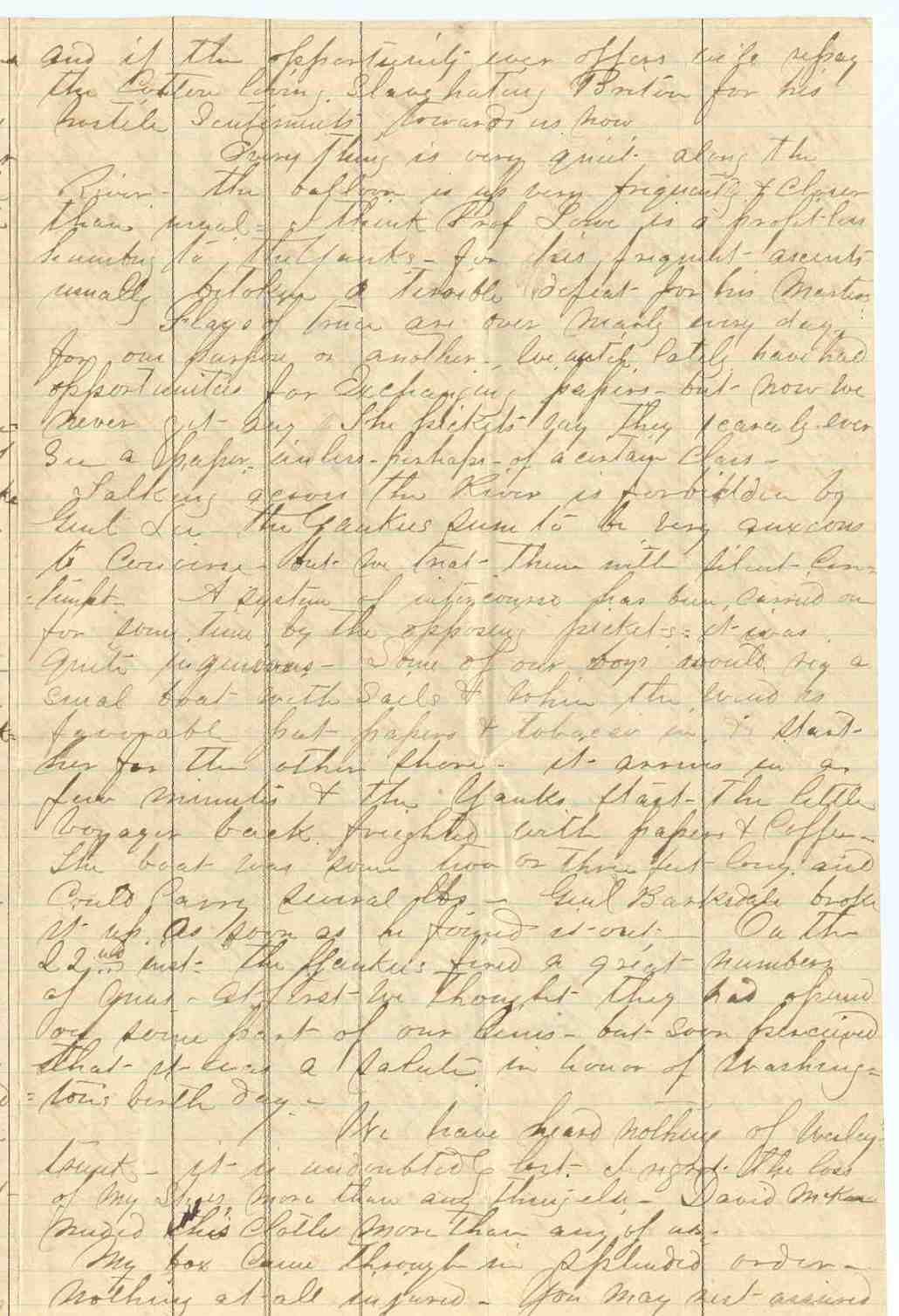 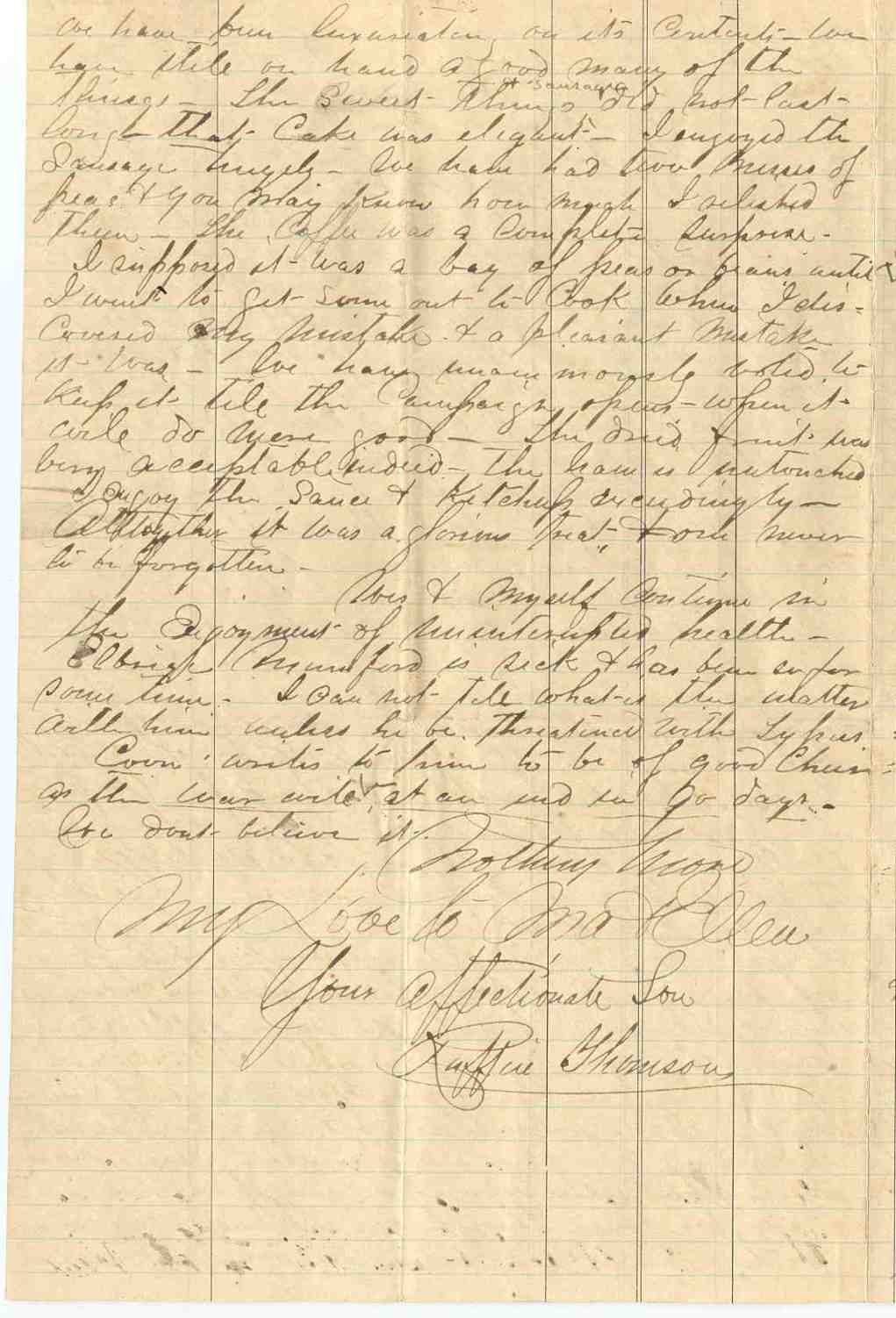 Contrary to expectations, when I last wrote you, we are still comfortably lodged in the famous city of Fredericskburg. At one time the prospect of an immediate departure was very flattering indeed, but today we are confident of a continued enjoyment of the comforts of winter quarters. The probable cause of change in the movements of our brigade is that we are assigned to Jackson’s Corps (I mean McLaw’s whole division) – which will remain on the Rappahannock as long as may be necessary.

Longstreet in put in command of the troops about Richmond, and in North Carolina, in place of G.W. Smith, Resigned. This is merely rumor, but it is still entitled to some credence. A large portion of Lee’s army that moved from here to what point we do not know. – Most probably to Richmond, from which central position Lee may watch the movements of the enemy, and make his moves accordingly. Indeed it is said he is even now on the Rapidan, which throws us on the right wing.

We have ceased to hear much of the expected attack on Charleston. Joe Hooker will commence another on to Richmond “as soon as he can travel which will be many weeks yet, if the weather does not clear up, and there is no prospect of that at present. There is no bottom to the mud wherever army wagons can get. Last winter was not a circumstance to this. There has been twice as much snow and much more rain. We had a snow storm on the 22nd that beat 12 inches in depth, and it drifted in some places 3 feet. But little is melted off yet, but it is raining this morning, and I guess it will soon disappear to make room for another snow to baffle fighting “Fighting Joe” still further. Standing on the river bank such nights as these is pretty severe, but we derive great consolation from looking across at our neighbors and seeing their forlorn condition. It is a great comfort to us to see them trotting their posts to keep their blood from freezing. Thus it ever is with mankind – extracting comfort from the misfortunes of each other. Many a time have I, when I would awake in a puddle of water, console myself with the reflection that some one else was in a worse fix than myself, and with a shout and a laugh we would make merry over the misfortunes of each other.

I suppose when we break up here to commence the campaign that there will be a repetition of the last summer’s work, hard living and hard working life — when? – that the campaign if successful – as it must be – will end the war, I confidently believe. Still, I am prepared to soldier for many a long year to come. Should Lincoln’s Conscript Law – which I hear is passed – be submitted to, there will be no cessation of hostilities till 1865, when a new President will have to be elected. It is folly to look for any aid other than our good right arms and a will that death alone can quench. There never was a people more completely isolated than ours – we need look fro no sympathy among the nations of the earth. Our “peculiar institution” makes them all our enemies, actively or passively. They want out cotton and that alone is in our favor. Let us once gain our independence and we may defy the world in arms – we must be a nation of soldiers, and if the opportunity ever offers will repay the cotton-loving, slave hating Briton for his hostile sentiments towards us now.

Everything is very quiet along the river. The balloon is up very frequently and closer than usual. I think Prof. Lowe is a profitless humbug to the Yanks, for his frequent ascents usually betoken a terrible defeat for his Master.

Flags of truce are over nearly every day for one purpose or another. We watch, lately, have had opportunities for exchanging papers, but now we never get any. The pickets say they scarcely ever see a paper, unless perhaps, of a certain class. talking across the river is forbidden by General Lee. The Yankees seem to be very anxious to converse, but we treat them with silent contempt. A system of intercourse has been carried on for sometime by the opposing pickets – it was quite ingenious. Some of our boys would rig a small boat with sails, and when the wind was favorable, put papers and tobacco in, and start her for the other shore. It arrives in a few minutes, and the Yanks start the little voyager back, freighted with papers and coffee. The boat was some two or three feet long, and could carry several pounds. General Barksdale broke it up as soon as he found it out.

On the 22nd instant the Yankees fired a great number of guns. At first we thought they had opened on some part of our lines, but soon perceived that it was a salute in the honor of Washington’s birthday.

We have heard nothing of Wesley’s trunk – it is undoubtedly lost. I regret the loss of my shoes more than anything else. David McRea needed his clothes more than any of us. My box came through in splendid order – nothing at all injured. You may rest assured we have been luxuriating in its contents. We have still on hand a good many of the things. I enjoyed the sausage hugely. We have had two messes of peas, and you may know how much I relished them. The coffee was a complete surprise – I supposed it was a bag of peas or beans until I went to get some out to cook, when I discovered my mistake, and a pleasant mistake it was. We have unanimously voted to keep it till the campaign opens, when it will do more good. The tried fruit was very acceptable indeed; the ham is untouched; I enjoy the sauce and ketchup exceedingly. Altogether it was a glorious treat, and one never to be forgotten.

Wes and myself continue in the enjoyment of uninterrupted health. Elbridge Mumford is sick, and has been so for some time. I cannot tell what is the matter with him, unless he be threatened with typhus. Coon writes to him to be of good cheer, as the war will be at an end in 90 days. We don’t believe it.

Nothing more. My love to Ma and Ellen.