11 March 1863: “John King has a negroe boy, a working on the fort by the name of Bob, and he has bin there every since the first call, he should have bin discharged when the other Franklin negroes was discharged.”

Posted on 11 Mar ’13 by Biff Hollingsworth

Item description: Letter, 11 March 1863, from R.C. Spann and C.W. Hamilton, concerning the impressment of slaves for the construction of Fort Beauregard (Louisiana). 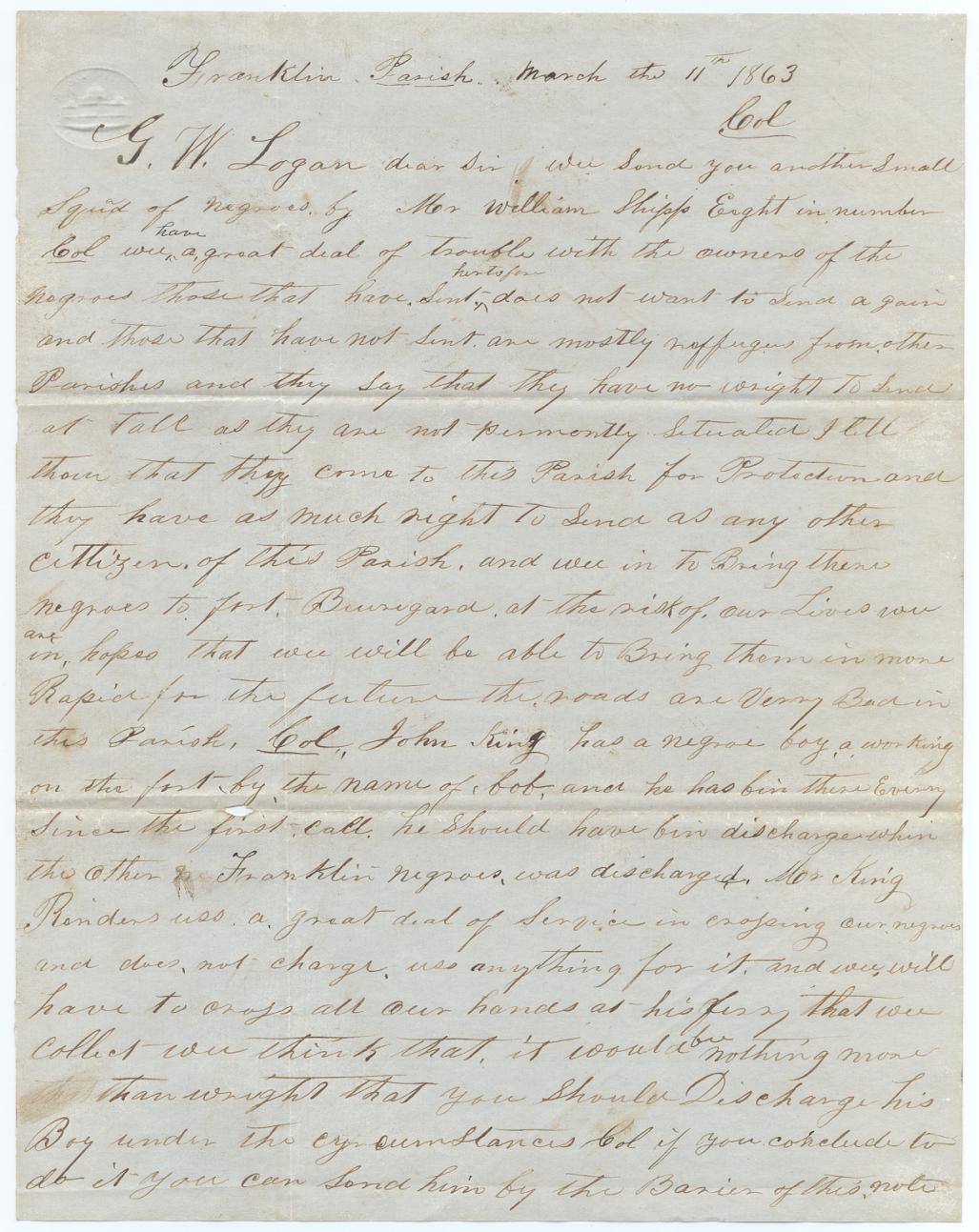 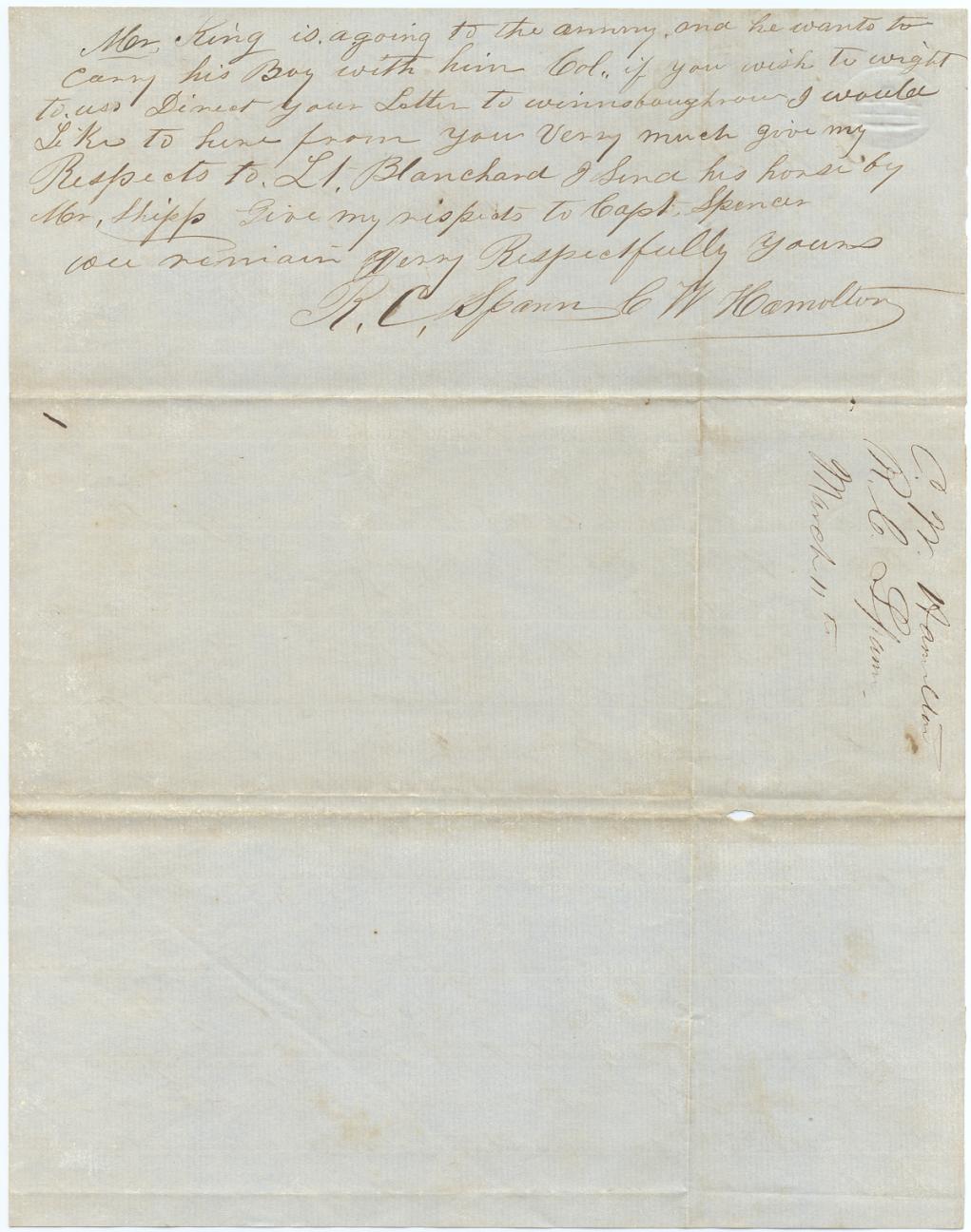 dear Sir, I will send you another small squad of negroes by Mr. William Shipp. Eight in number. Col. wee have a great deal of trouble with the owners of the negroes those that have sent heretofore does not want to send a gain and those that have not sent are mostly reffugees from other parishes and they say that they have no wright to send at tall as they are not permanently situated I tell them that they come to this parish for protection and they have as much right to send as any other citizen of this parish, and wee in to bring there negroes to Fort Beauregard at the risk of our lives wee are in hopes that wee will be able to bring them in more rapid for the future the roads are very bad in this parish. Col., John King has a negroe boy, a working on the fort by the name of Bob, and he has bin there every since the first call, he should have bin discharged when the other Franklin negroes was discharged. Mr. King renders uss a great deal of service in crossing our negroes and does not charge uss anything for it, and wee will have to cross all our hands at his ferry that wee collect wee think that it would be nothing more than wright that you should discharge his boy under the circumstances. Col. if you conclude to do it you can send him by the barier of this note.

Mr. King is a going to the army and he wants to carry his boy with him. Col., if you wish to wright to uss, direct your letter to winnsboughrow. I would like to here from you very much give my respects to Lt. Blanchard I send his horse by Mr. Shipp. Give my respects to Capt. Spencer.

More about George W. Logan:
George William Logan (1828-1896) was born in Charleston, S.C., to George William Logan and Anna d’Oyley Glover Logan. In 1849, he moved to New Orleans, La., and, in 1853, he married Marie Telide Soniat du Fossat. Logan, a businessman before and after the Civil War, had interests in the cotton brokerage and exporting firm Logan, Smith, and Claiborne. During the war, he served as a lieutenant colonel in the Confederate Army, commanding a battalion of heavy artillery in Louisiana from 1862 to 1865. The greater part of his service was in the District of Western Louisiana in defense of Fort Beauregard at Harrisonburg on the Ouachita River, near the point where the Ouachita joins the Black River. In September 1863, Logan was ordered to Vienna, La., and, in April 1864, he joined General Kirby Smith in the defense of Shreveport. In March 1865, Logan assumed command at Fort Gallagher near Natchitoches in March 1865 and was paroled in May 1865.