Posted on 19 Mar ’13 by Biff Hollingsworth 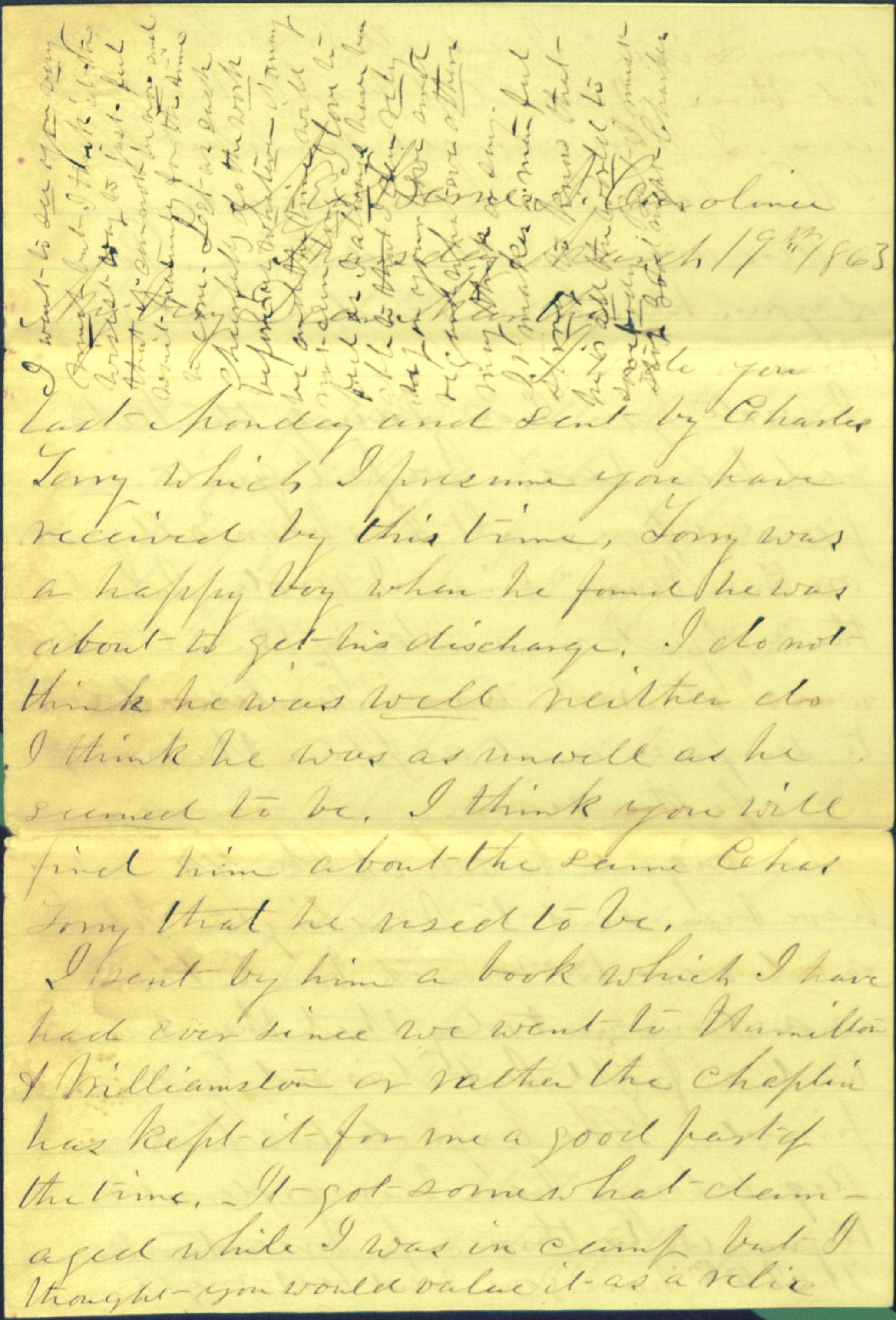 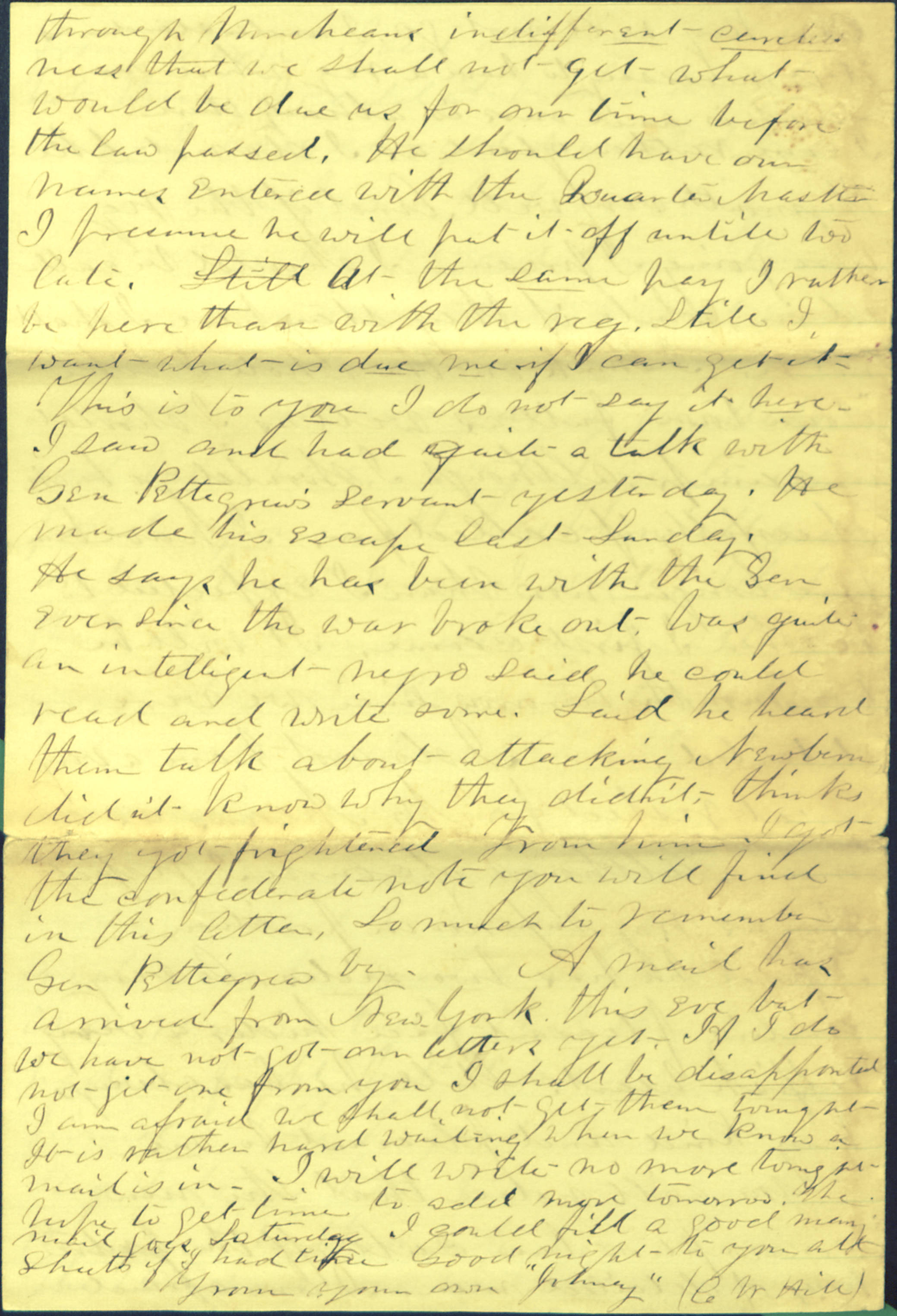 Last Monday and sent by Charles

Lorry which I presume you have

received by this time.  Lorry was

a happy boy when he found he was

about to get his discharge.  I do not

think he was well neither do

I think he was as unwell as he

seemed to be.  I think you will

find him about the same Chas

Lorry that he used to be.

I sent by him a book which I have

Had ever since we went to Hamilton

& Williamston or rather the Chaplin

has kept it for me a good part of

the time.  It got somewhat dam-

aged while I was in camp but I

thought you would value it as a relic

from “Dixie.”  I sent all my old letters

but three.  I couldn’t bear to be without

any.  I have changed somewhat since

I have been here about reading

letters over the second time. Some

Of yours have been read a great many

I wrote you how surely the Rebs

had been here. We feel quite im-

posed upon. It has been “all quiet

on the Neuse” since I wrote. What

their object in making the attack

was I do not know, unless it was

to surprise and capture the camp

The brigade to which the 44th belong

have been sent to Washington N.C.

and were to march back. There

is a rumour today that they have

had a fight but it is not yet con-

firmed. The brigade to which our

Reg belongs have been ordered to

Plymouth to throw up breastworks.

Our Reg will not go. I understand as

it is necessary to have a reg where our

camp is and ours is already there.

I am rather glad as I do not like

Plymouth very well. And if the reg

were going I presume I should be call-

ed in, while if they stay here I shall

not be. I think on the whole I like

“down town” full as well as I should

in camp, although I should go back

cheerfully if called for. I have been

here longer now than I expected to

be when I first came.  It will be

two months tomorrow since we were

great respect for Mr. Means as a

man. Although of course I respect

him as my superior in position.

I find he has two sides. A very

selfish heart. Still he has always

been kind and pleasant to me.

You will notice that the new

conscription law cuts off the extra

pay of detailed men. I am afraid

mess that we shall not get what

would be due us for our time before

the law passed. He should have our

names entered with the Quarter Master

I presume he will put it off until too

late. Still At the same pay I rather

be here than with the reg. Still I

want what is due me if I can get it.

This is to you I do not say it here.

I saw and had quite a talk with

made his escape last Sunday.

He says he has been with the Gen

ever since the war broke out. Was quite

an intelligent negro said he could

read and write some. Said he heard

them talk about attacking Newbern

didn’t know why they didn’t, thinks

they got frightened from him. I got

the confederate note you will find

in this letter. So much to remember

arrived from New York this eve but

we have not got our letters yet. If I do

not get one from you I shall be disappointed

I am afraid we shall not get them brought

It is rather hard waiting when we know a

mail is in. I will write no more tonight

hope to get time to add more tomorrow. The

mail goes Saturday I could fill a good many

sheets if I had time Good night to you all

I want to see you very

much but I think it  the

that it can not be now and

wait patiently for the time

to come. Let us each

cheerfully do the work

before us whatever it may

be and the time will

not seem long I love to

feel as I always have been

able to that I can rely

regard what ever others

may think or say.

It makes a man feel

strong to know that

he is all the world  to

somebody But I must