21 March 1863: “Her bondage, if such it can be called, sits lightly upon her; but she has no sympathy for rebels…”

Posted on 21 Mar ’13 by Biff Hollingsworth

Item description: Published letter, dated 21 March 1863, written by Corporal Zenas T. Haines, Company D, 44th Massachusetts Infantry Regiment. The letter is an excerpt from Haines’ account, Letters from the Forty-Fourth Regiment M.V.M.: A Record of the Experience of a Nine Months’ Regiment in the Department of North Carolina in 1862-3 (published in Boston in 1863). 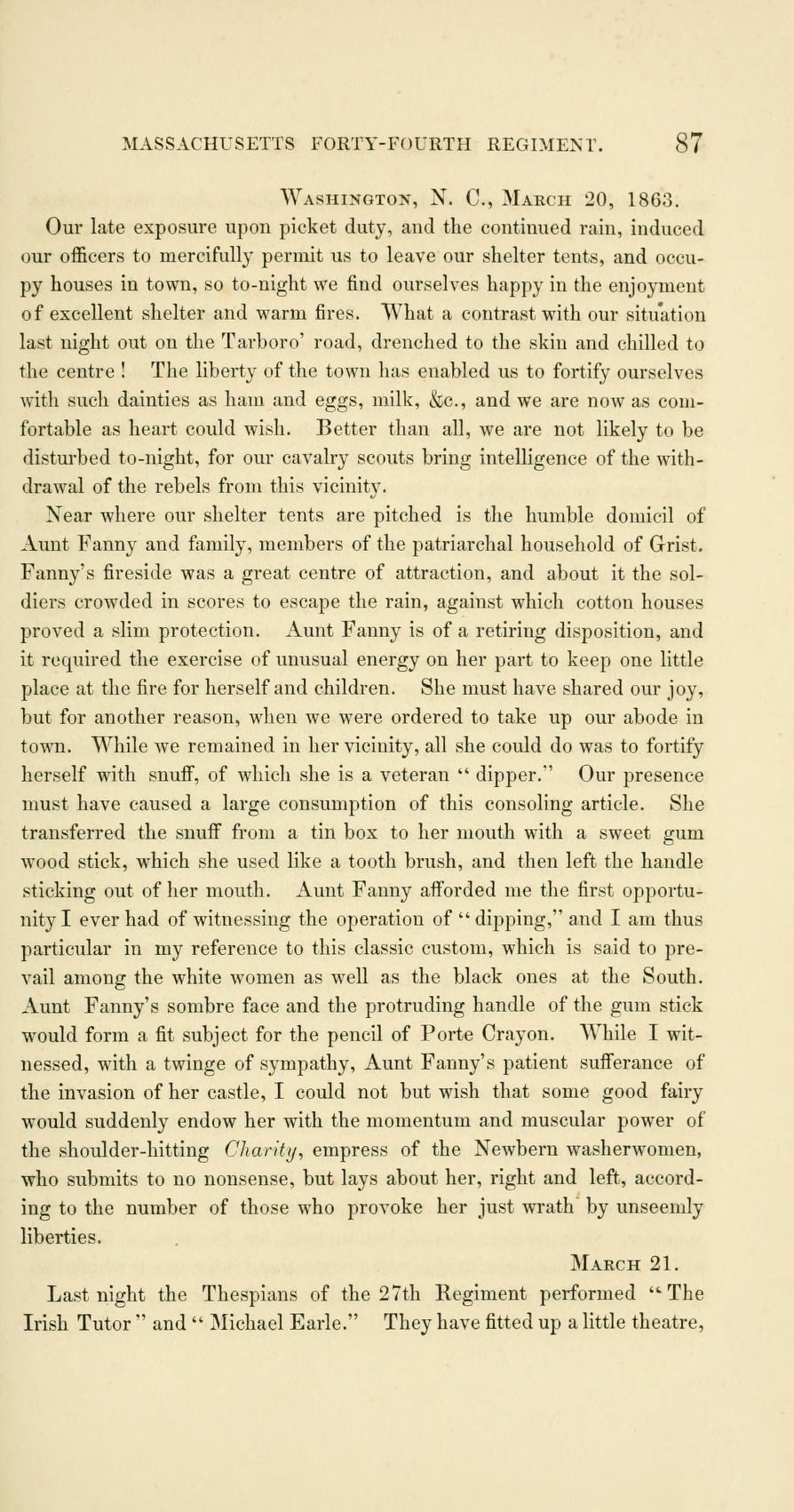 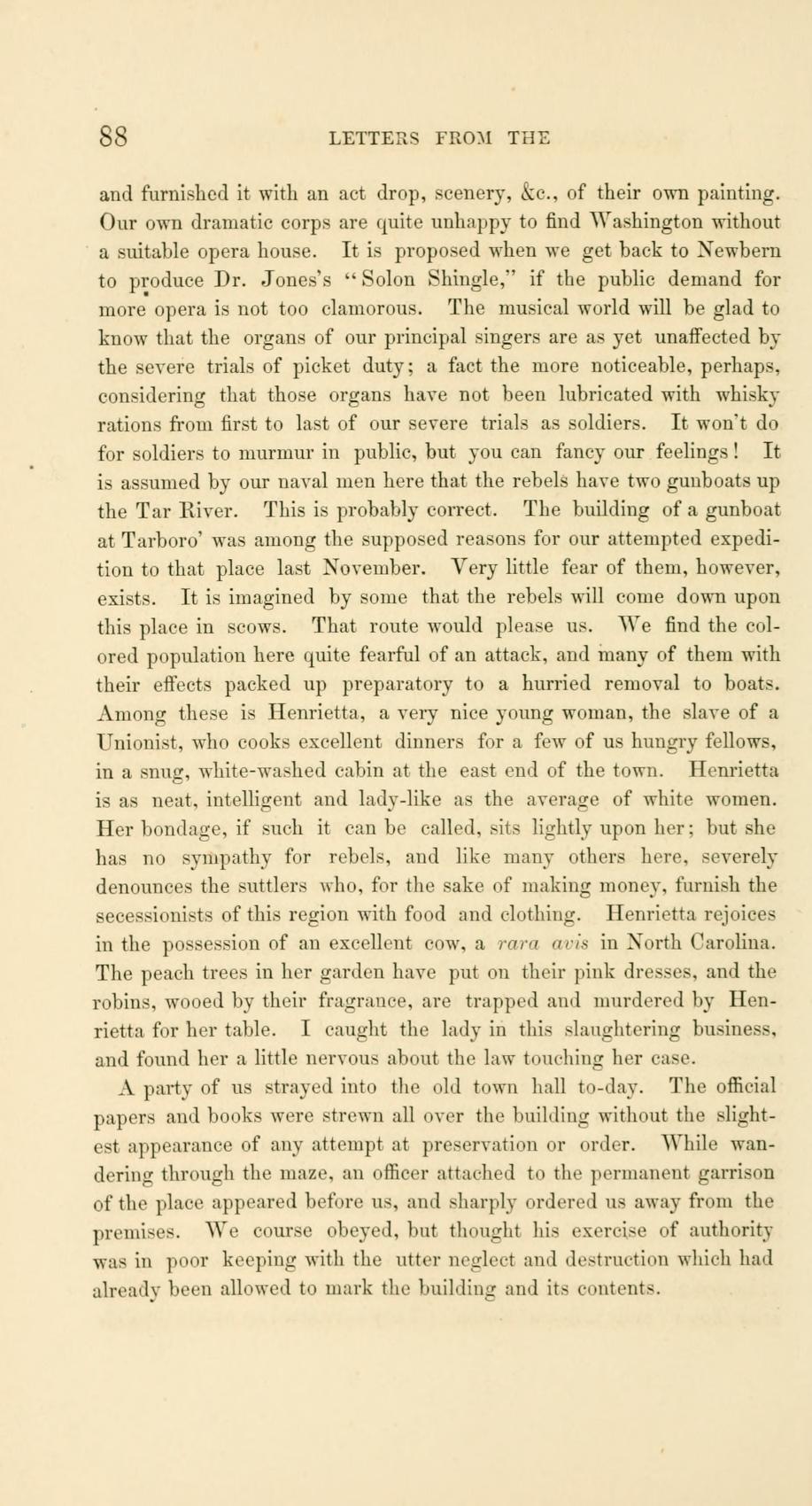 Item citation: From, Letters from the Forty-Fourth Regiment M.V.M.: A Record of the Experience of a Nine Months’ Regiment in the Department of North Carolina in 1862-3, by Zenas T. Haines, Boston: Printed at the Herald Job Office, 1863. Catalog Number: C970.742 H15, North Carolina Collection, University of North Carolina at Chapel Hill.

Last night the Thespians of the 27th Regiment performed “The Irish Tutor” and “Michael Earle.” They have fitted up a little theatre, and furnished it with an act drop, scenery, &c., of their own painting. Our own dramatic corps are quite unhappy to find Washington without a suitable opera house. It is proposed when we get back to Newbern to produce Dr. Jones’s “Solon Shingle,” if the public demand for more opera is not too clamorous. The musical world will be glad to know that the organs of our principal singers are as yet unaffected by the severe trials of picket duty; a fact the more noticeable, perhaps, considering that those organs have not been lubricated with whisky rations from first to last of our severe trials as soldiers. It won’t do for soldiers to murmur in public, but you can fancy our feelings! It is assumed by our naval men here that the rebels have two gunboats up the Tar River. This is probably correct. The building of a gunboat at Tarboro’ was among the supposed reasons for our attempted expedition to that place last November. Very little fear of them, however, exists. It is imagined by some that the rebels will come down upon this place in scows. That route would please us. We find the colored population here quite fearful of an attack, and many of them with their effects packed up preparatory to a hurried removal to boats. Among these is Henrietta, a very nice young woman, the slave of a Unionist, who cooks excellent dinners for a few of us hungry fellows, in a snug, white-washed cabin at the east end of the town. Henrietta is a neat, intelligent and lady-like as the average of white women. Her bondage, if such it can be called, sits lightly upon her; but she has no sympathy for rebels, and like many others here, severely denounces the suttlers who, for the sake of making money, furnish the secessionists of this region with food and clothing. Henrietta rejoices in the possession of this region with food and clothing. Henrietta rejoices in the possession of an excellent cow, a rara avis in North Carolina. The peach trees in her garden have put on their pink dresses, and the robins, wooed by their fragrance, are trapped and murdered by Henrietta for her table. I caught the lady in this slaughtering business, and found her a little nervous about the law touching her case.

A party of us strayed into the old town hall to-day. The official papers and books were strewn all over the building without the slightest appearance of any attempt at preservation or order. While wandering through the maze, and officer attached to the permanent garrison of the place appeared before us, and sharply ordered us away from the premises. We course obeyed, but thought his exercise of authority was in poor keeping with the utter neglect and destruction which had already been allowed to mark the building and its contents.