Item Description: Letter, dated 19 April, 1863, from John Steele Henderson to his mother, Mary Henderson.  He discusses family members, including the death of a cousin, and the recent visit of a band to Salisbury. 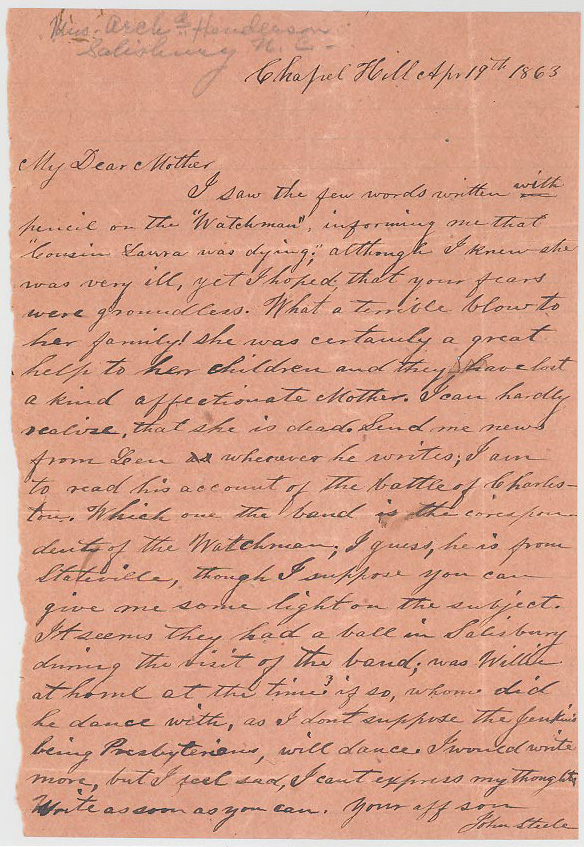 I saw the few words written with pencil on the “Watchman”, informing me that “Cousin Laura was dying;” although I knew she was very ill, yet I hoped; that your fears were groundless.  What a terrible blow to her family! She was certainly a great help to her children and they have lost a kind affectionate Mother. I can hardly realize, that she is dead.  Send me news from Len as wherever he writes; I am to read his account of the battle of Charles-ton. Which one the band is the corespon-dents of the Watchman; I guess, he is from Stateville, though I suppose you can give me some light on the subject.  It seems they had a ball in Salisbury during the visit of the band; was Willie at home at the time? if so, whom did he dance with, as I dont suppose the Jenkin’s being Presbyterians, will dance. I would write more, but I feel sad, I can’t express my thoughts.

Write as soon as you can.  Your aff. son

More about this item: John Steele Henderson was born in Salisbury, N.C., on 6 January 1846, the son of Archibald II and Mary Ferrand Henderson. John S. Henderson was educated at Alexander Wilson’s school in Alamance County, N.C., and entered the University of North Carolina in January 1862. Five months after the death of his brother at Cold Harbor on 1 June 1864, Henderson, at the age of 18, left the University and enlisted as a private in Company B, 10th North Carolina Regiment. Following the Civil War, Henderson went on to become a member of the North Carolina General Assembly, a United States congressman, a Salisbury, N.C. city planner, a lawyer, and a founder of rural free delivery of the mail. (Adapted from the biographical note by James Shober Brawley in the Dictionary of North Carolina Biography, Volume III, 1988.)