4 May 1863: ” [Commencement] came off without much excitement, eight graduates; the number in peace time was between eighty & ninety.”

Posted on 4 May ’13 by dwaugh
Item description:  Letter, May 4, 1863 from John Steele Henderson to his mother.  Henderson describes the significant loss of UNC’s student body due to the war.  While he shares his experience speaking at Commencement, Henderson express more concern with securing a pair of shoes.

More about John S. Henderson: John Steele Henderson was born in Salisbury, N.C., on 6 January 1846, the son of Archibald II and Mary Ferrand Henderson. John S. Henderson was educated at Alexander Wilson’s school in Alamance County, N.C., and entered the University of North Carolina in January 1862. Five months after the death of his brother at Cold Harbor on 1 June 1864, Henderson, at the age of 18, left the University and enlisted as a private in Company B, 10th North Carolina Regiment. Following the Civil War, Henderson went on to become a member of the North Carolina General Assembly, a United States congressman, a Salisbury, N.C. city planner, a lawyer, and a founder of rural free delivery of the mail. (Adapted from the biographical note by James Shober Brawley in the Dictionary of North Carolina Biography, Volume III, 1988.) 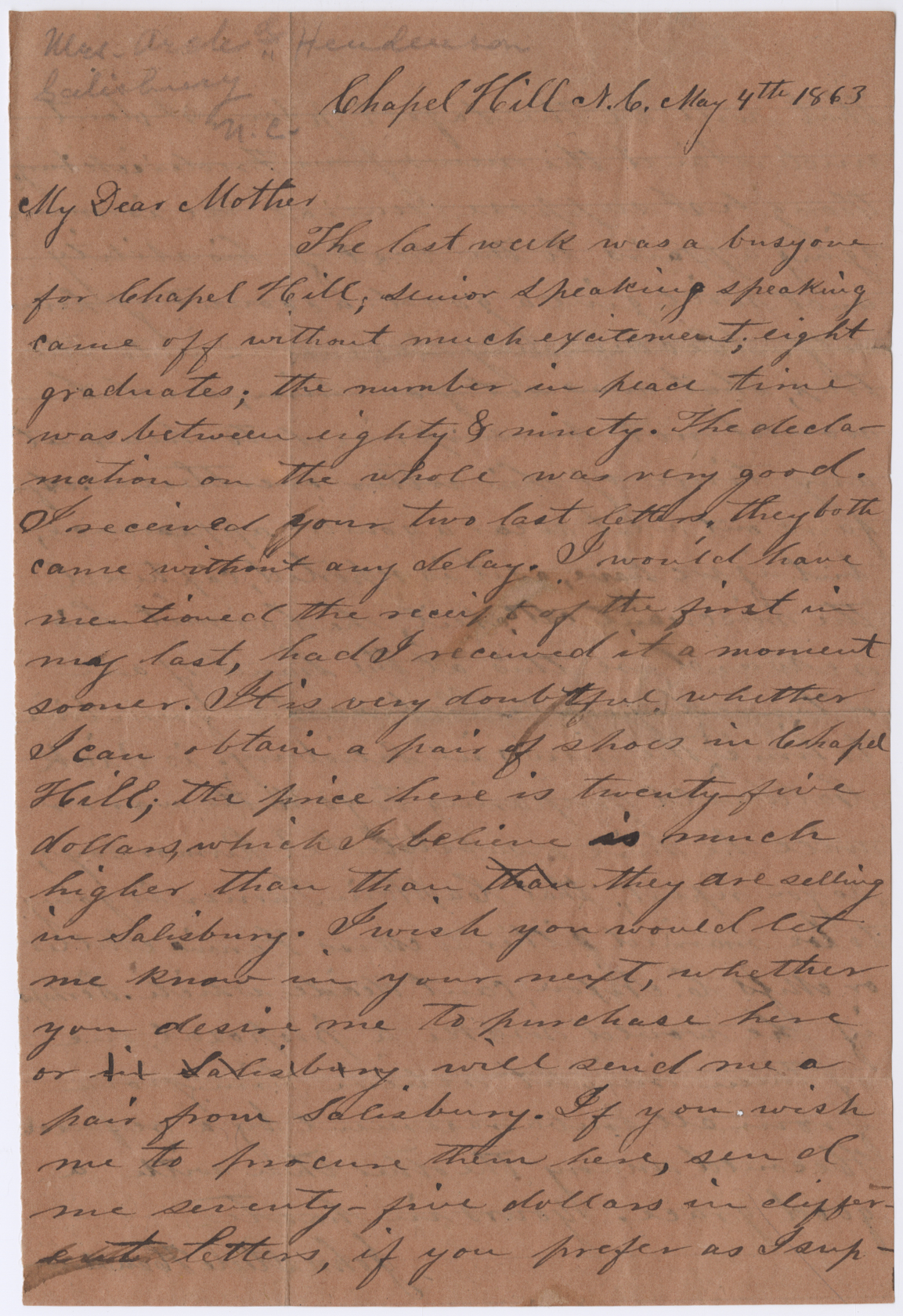 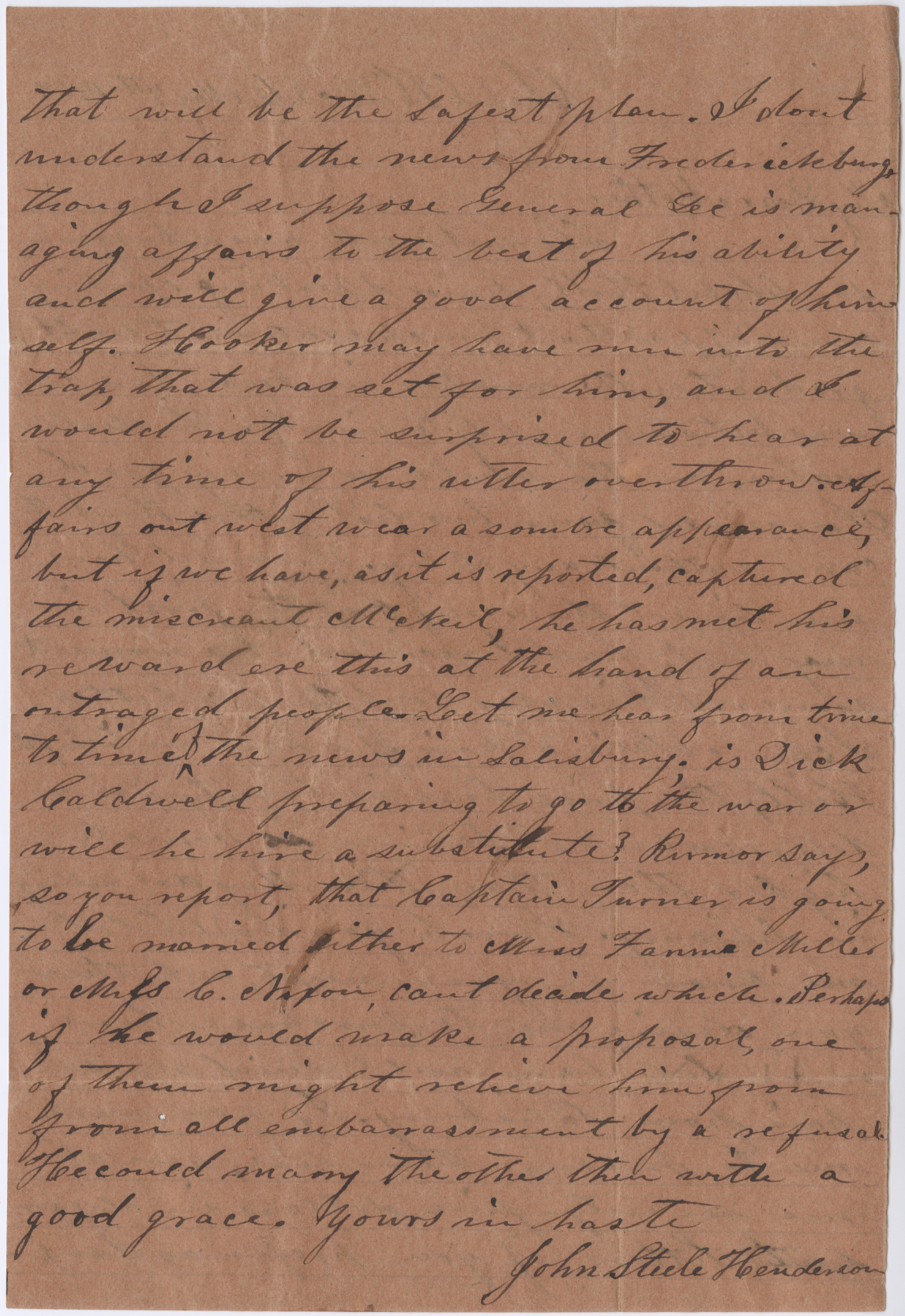 Chapel Hill N.C. May 4th 1863
My Dear Mother
The last week was a busy one for Chapel Hill; senior speaking speaking came off without a much excitement; eight graduates; the number in peace time was between eighty & ninety. The declamation on the whole was very good. I received your two letters; they both came without any delay. I would have mentioned the receipt of the first in my last, had I received it a moment sooner. It is very doubtful whether I can obtain a pair of shoes in Chapel Hill; the price here is twenty-five dollars, which I believe is much higher than than they are selling in Salisbury. I wish you would let me know in your next, whether you desire me to purchase here or will send me a pair from Salisbury. If you wish me to procure them here, send me seventy-five dollars in different letters, if you prefer as  I sup- that will be the safest plan. I dont understand the news from Frederickburg, though I suppose General Lee is managing affairs to the best of his ability and will give a good account of himself.  Hooker may have run into the trap, that was set for him, and I would not be surprised to hear at any time of his utter overthrow. Affairs out west wear a sombre appearance, but if we have, as it is reported, captured the miscreant McNeil, he has met his reward ere this at the hand of an outraged people. Let me hear from time to time ^of the news in Salisbury; is Dick Caldwell preparing to go to the war or will he hire a substitute? Rumor says, so you report, that Captain Turner is going to be married either to Miss Fannie Miller or Mrss. C. Nixon, cant decide which. Perhaps if he would make a proposal, one of them might relieve him from from all embarrassment by a refusal. He could marry the other then with a good grace. Yours in haste
John Steele Henderson
This entry was posted in Southern Historical Collection and tagged Chapel Hill, John S. Henderson, Salisbury, substitutes, University of North Carolina. Bookmark the permalink.