29 May 1863: “Wishing for you, General, new laurels, and that your path to glory may not be darkened by a Single cloud…”

Item description: In this letter, 29 May 1863, to Brigadier General Raleigh E. Colston, a committee of officers (Francis Wayland Bond, John Cowan, Henry W. Horne, and William Henry Thomson) from the 1st and 3rd North Carolina Infantry regiments took it upon themselves to explain their preference for being brigaded with other North Carolina troops and led by a brigadier general from the same state. Their stated preference, they asserted, gave no cause for Special Order No. 144, in which General Robert E. Lee relieved Colston of his command of the 3rd Brigade, 1st Division, citing the opposition of the North Carolina troops to serving under a Virginia brigadier general. 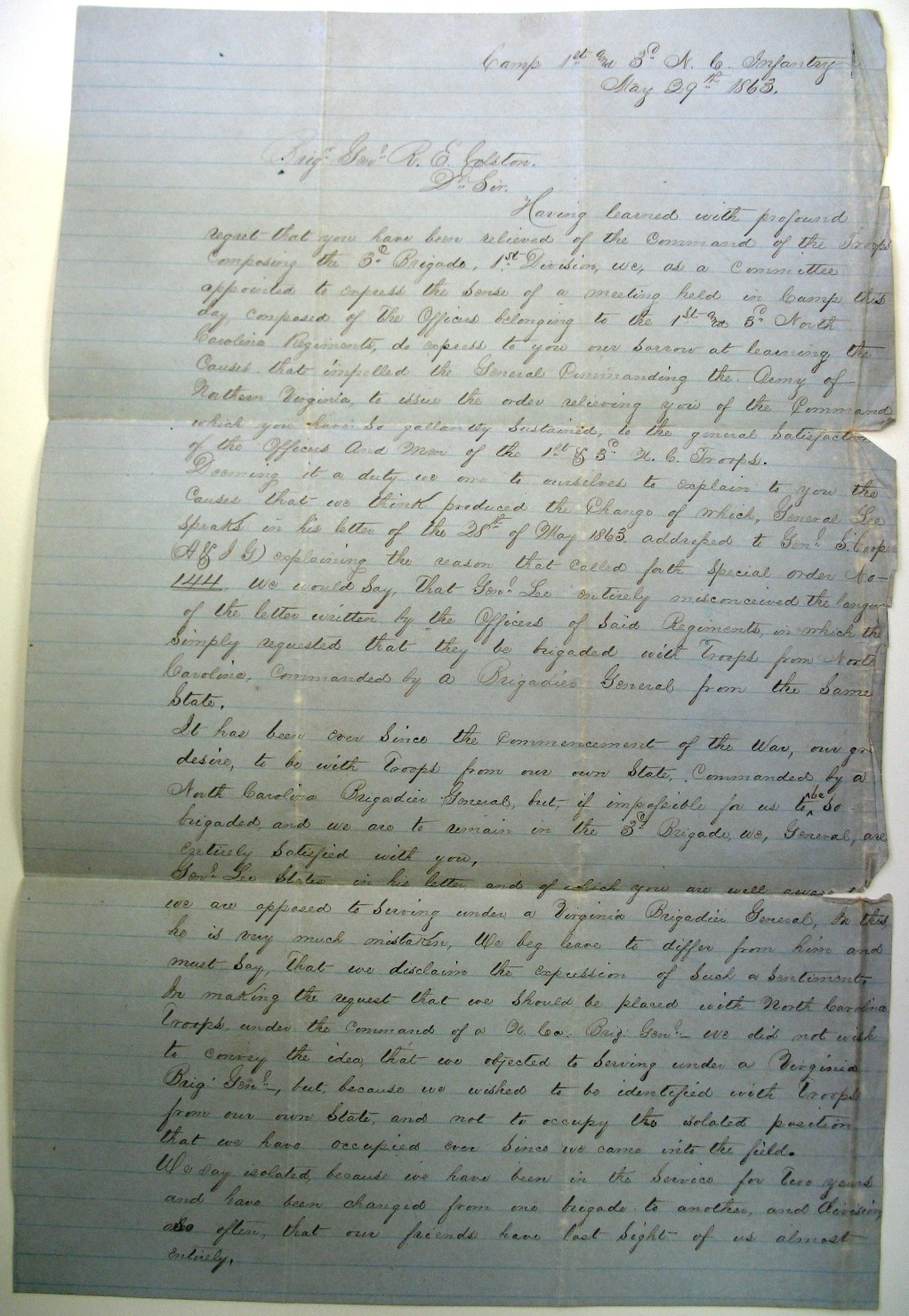 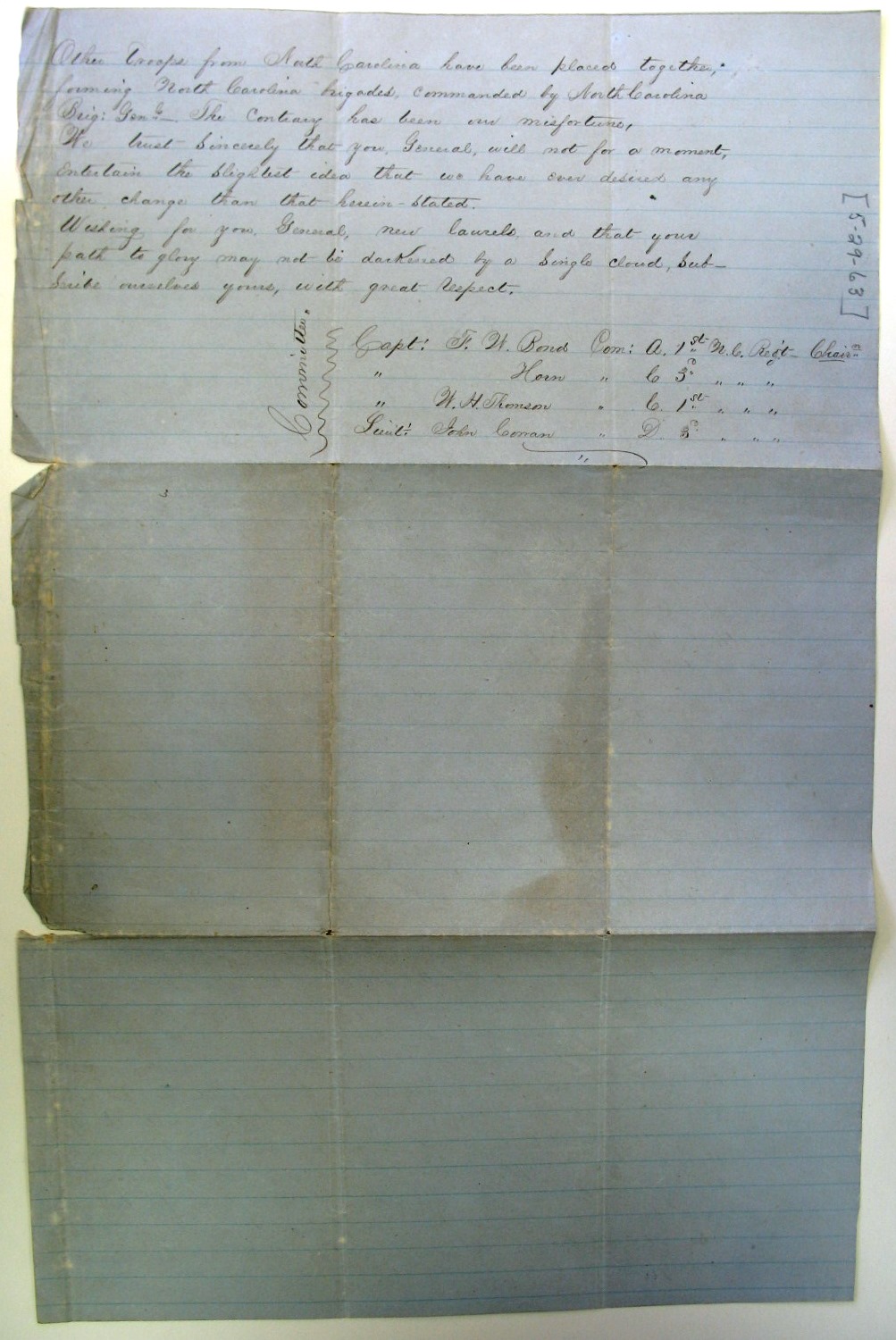 Having learned with profound regret that you have been relieved of the command of the Troops composing the 3d Brigade, 1st Division, we, as a committee appointed to express the sense of a meeting held in Camp this day, composed of the Officers belonging to the 1st and 3d North Carolina Regiments, do express to you our sorrow at learning the causes that impelled the General Commanding the Army of Northern Virginia, to issue the order relieving you of the Command which you have so gallantly Sustained, to the general Satisfaction of the Officers and Men of the 1st & 3d N.C. Troops.

Deeming it a duty we owe to ourselves to explain to you the causes that we think produced the Change of which, General Lee speaks in his letter of the 28th of May 1863 addressed to Genl S. Cooper (AGIG) explaining the reason that called forth Special order No- 144, we would Say, that Genl Lee entirely misconceived the language of the letter written by the Officers of Said Regiments, in which they simply requested that they be brigaded with Troops from North Carolina, commanded by a Brigadier General from the Same State.

It has been ever Since the commencement of the War, our great desire, to be with Troops from our own State, Commanded by a North Carolina Brigadier General, but, if impossible for us to be So brigaded, and we are to remain in the 3d Brigade, we, General, are entirely Satisfied with you.

Genl Lee States in his letter and of which you are well aware that we are opposed to Serving under a Virginia Brigadier General, In this, he is very much mistaken, We beg leave to differ from him and must Say, That we disclaim the expression of Such a Sentiment. In making the request that we Should be placed with North Carolina Troops, under the command of a N. Ca. Brig: Genl_ we did not wish to convey the idea that we objected to Serving under a Virginia Brig: Genl, but, because we wished to be identified with Troops from our own State, and not to occupy the isolated position that we have occupied ever Since we came into the field.

We say isolated, because we have been in the Service for Two years and have been changed from one brigade to another, and division, so often, that our friends have lost Sight of us almost entirely.

Other Troops from North Carolin have been placed together, forming North Carolina brigades, commanded by North Carolina Brig: Genl_. The contrary has been our misfortune, We trust sincerely that you, General, will not for a moment, entertain the Slightest idea that we have ever desired any other change than that herein – stated.

Wishing for you, General, new laurels, and that your path to glory may not be darkened by a Single cloud, SubScribe ourselves yours, with great respect.