30 May 1863: “The ‘Chattahoochee’ is no more! and I am truly thankful that I was not present to witness the horrible scene on board. But I am anticipating the ship exploded her boiler on the 27th, inst., 7 miles below Alum Bluff, causing the death of 16 persons instantly, and two more will not recover.”

Posted on 30 May ’13 by Biff Hollingsworth

Item description: Letter, 30 May 1863, from George Washington Gift to his fiancee Ellen Augusta Shackelford, concerning the explosion that destroyed the gunboat C.S.S. Chattahoochee on 27 May 1863.

George Washington Gift (b. 1833) was raised in Tennessee, and went to California some time before the Civil War. He came home from California in the summer of 1861 in order to join the Confederate Navy. He served on several C.S.N. vessels in the coastal waters of North Carolina, Georgia, Florida, and Alabama, including the C.S.S. Chattahoochee, based at Chattahoochee, Fla.; the C.S.S. Gaines, based at Mobile, Ala.; the R.E. Lee, off the North Carolina coast; and the Tallahassee, based at Wilmington, N.C. In April 1864, Gift married Ellen Augusta Shackelford of Early County, Ga. After the war, Gift spent time in New York City; in Memphis, Tenn., where the Gift family apparently lived; and in Hong Kong. 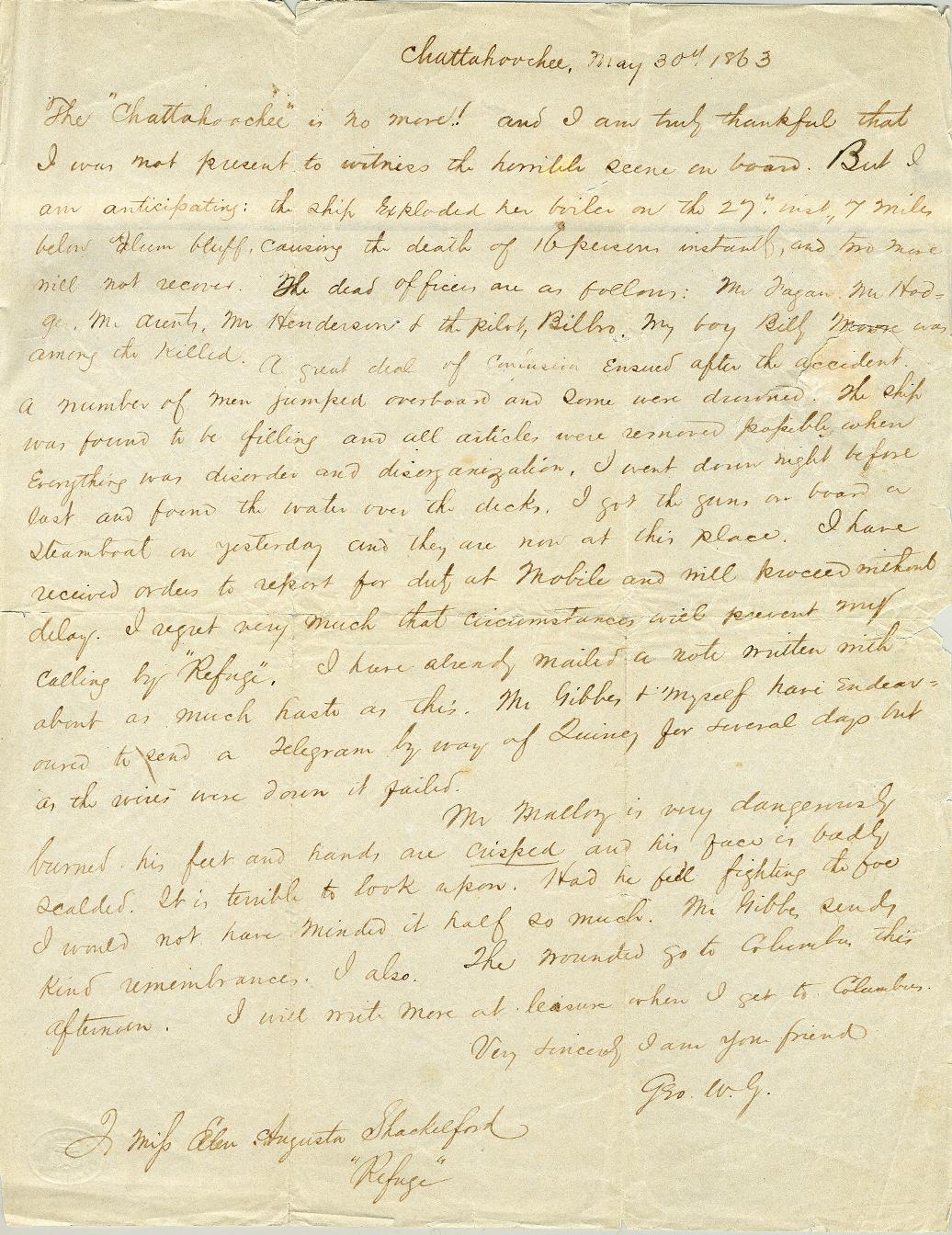 The “Chattahoochee” is no more! and I am truly thankful that I was not present to witness the horrible scene on board. But I am anticipating the ship exploded her boiler on the 27th, inst., 7 miles below Alum Bluff, causing the death of 16 persons instantly, and two more will not recover. The dead officers are as follows: Mr. Fagan, Mr. Hodges, Mr. Arents, Mr. Henderson & the pilot, Bilbro. My boy Bill Moore was among the killed. A great deal of confusion ensued after the accident. A number of men jumped overboard and some were drowned. The ship was found to be filling and all articles were removed possible when everything was disorder and disorganization, I went down night before last and found the water over the decks. I got the guns on board a steamboat on yesterday and they are now at this place. I have received orders to report for duty at Mobile and will proceed without delay. I regret very much that circumstances will present my calling by “Refuge.” I have already mailed a note written with about as much haste as this. Mr. Gibbes & myself have endeavoured to send a telegram by way of Quincy for several days but as the wires were down it failed.

Mr. Mallory is very dangerously burned, his feet and hands are crisped and his face is badly scalded. It is terrible to look upon. Had he fell fighting the foe I would not have minded it half so much. Mr. Gibbes sends kind remembrances. I also. The wounded go to Columbus this afternoon. I will write more at leisure when I get to Columbus.

Very sincerely I am your friend.