11 June 1863: “…News from all quarters is that desertion is progressing to an alarming extent and disloyalty is every where increasing and growing bolder”

Posted on 11 Jun ’13 by Biff Hollingsworth

Item description: In this diary entry of 11 June 1863, David Schenck (1835-1902),  who during the war held the post of receiver in Lincoln County, N.C., under the Sequestration Act, confided his doubts about the Confederacy’s chances for success. Not only did it face a vastly superior military force, the loyalty of its army and its homefront were in question. Desertion in North Carolina was widespread and on the rise. Deserters in Yadkin and Wilkes counties alone numbered in the hundreds. The home guard had neither the authority nor the public support to enforce the conscription laws as women provided safe harbor to their husbands and sons who deserted and Chief Justice Richmond Mumford Pearson seemingly granted discharges without any pretext. The siege of Vicksburg and the coming battle for control of the Mississippi only darkened Schenck’s outlook. 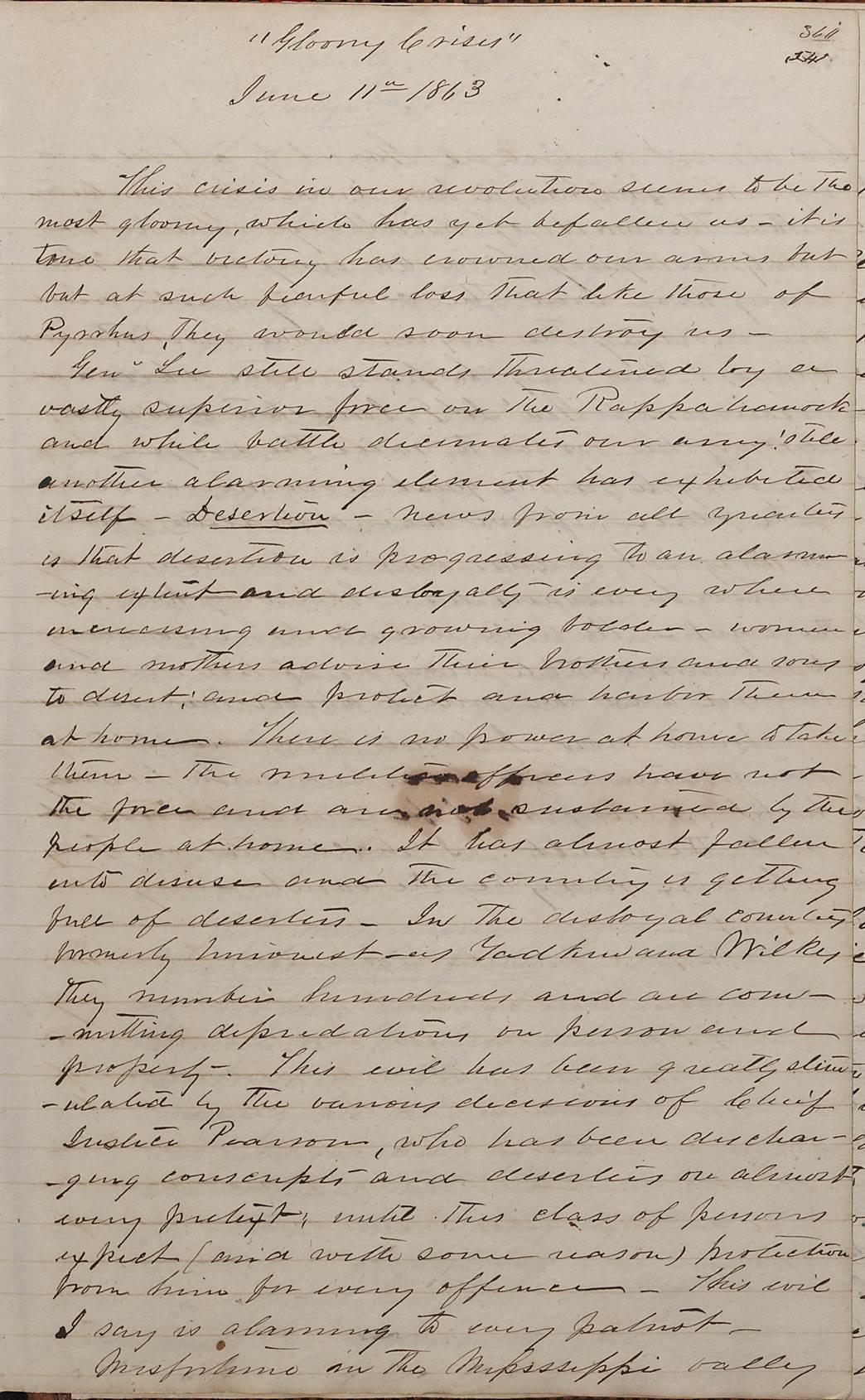 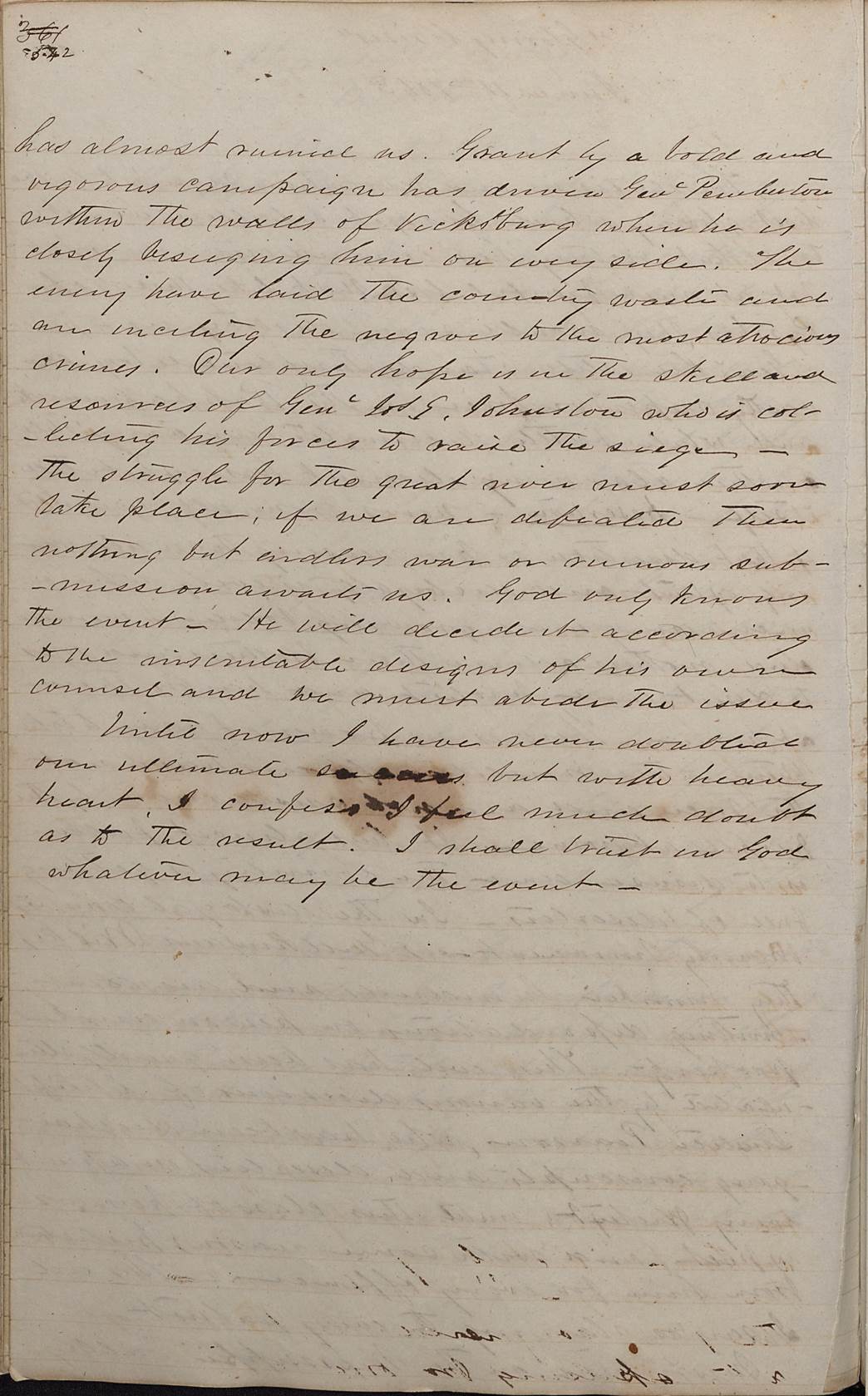 This crisis in our revolution seems to be the most gloomy, which has yet befallen us – it is true that victory has crowned our arms but but at such fearful loss that like those of Pyrrhus, They would soon destroy us __

Gen Lee still stands threatened by a vastly superior force on the Rappahamock and while battle decimates our army! still another alarming element has exhibited itself – Desertion – news from all quarters is that desertion is progressing to an alarming extent and disloyalty is every where increasing and growing bolder – women and mothers advise their brothers and sons to desert; and protect and harbor them at home. There is no power at home to take them – The militia officers have not the force and are not sustained by the people at home. It has almost fallen into disuse and the country is getting full of deserters _ In the disloyal counties formerly Unionist – in Yadkin and Wilkes They number hundreds and are committing depredations on person and property. This evil has been greatly stimulated by the various decisions of Chief Justice Pearson, who has been discharging conscripts and deserters on almost every pretext; until this class of persons expect (and with some reason) protection from him for every offence __ This evil I say is alarming to every patriot __

Misfortune in Mississippi valley has almost ruined us. Grant by a bold and vigorous campaign has driven Genl Pemberton within the walls of Vicksburg where he is closely besieging him on every side. The enemy have laid the country waste and are inciting the negroes to the most atrocious crimes. Our only hope is in the skill and resources of Genl Jos E. Johnston who is collecting his forces to raise the siege __ The struggle for the great river must soon take place; if we are defeated then nothing but endless war or ruinous submission awaits us. God only knows the event __ He will decide it according to the inscrutable designs of his own counsel and we must abide the issue

Until now I have never doubted our ultimate success but with heavy heart I confess I feel much doubt as to the result. I shall trust in God whatever may be the event __