27 June 1863: “People strong Unionist and looked mad and sullen at our appearance a great many closed doors”

Item Description: Diary entry by Thomas Ware of the 15th Georgia Infantry Regiment.  In his entry, he describes the towns of Greencastle and Chambersburg, PA as the Confederates march through during the Gettysburg Campaign.  He also describes pillaging of the land by his fellow soldiers. Thomas Ware was killed on July 2, 1863 during the Battle of Gettysburg. 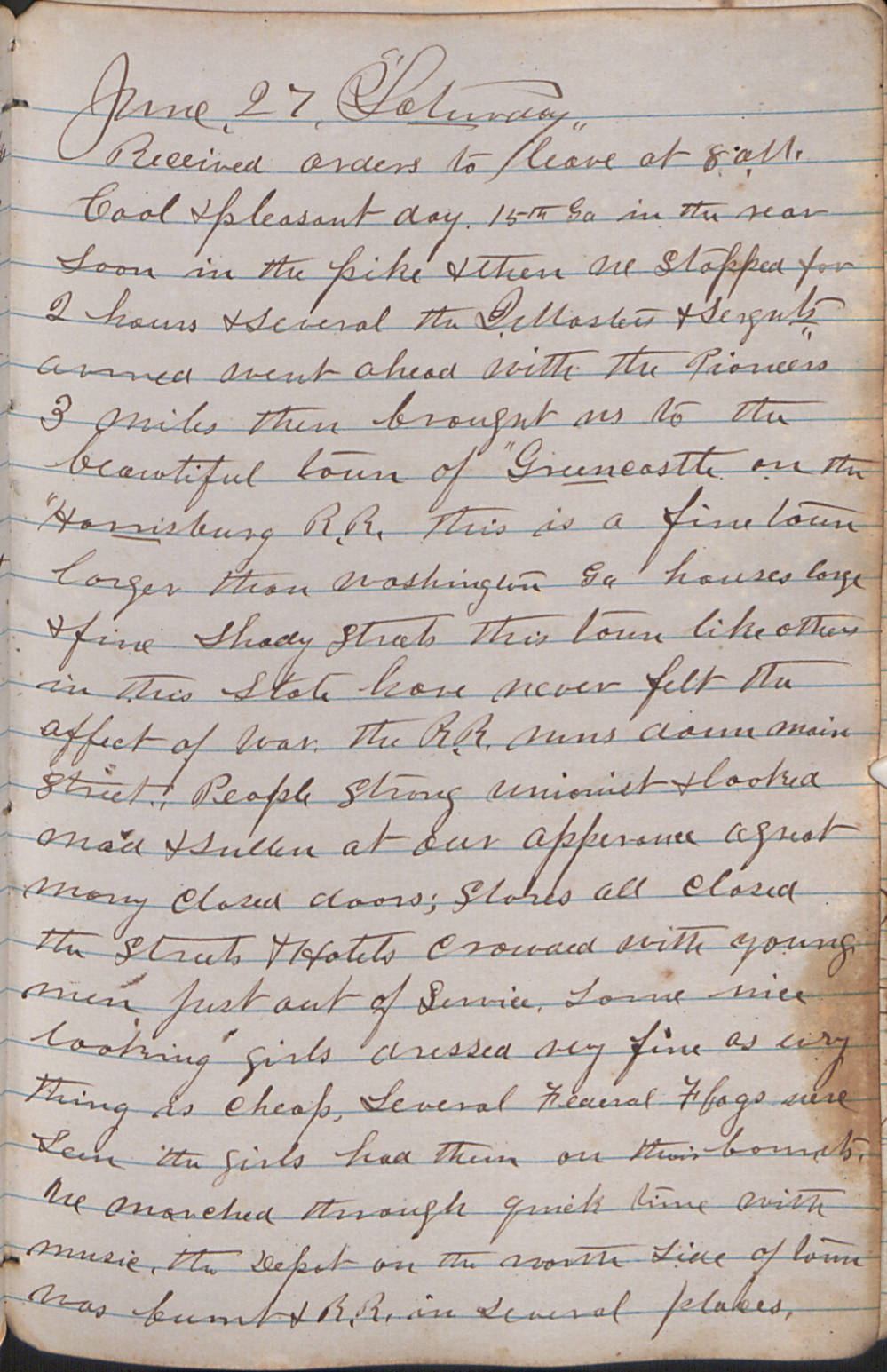 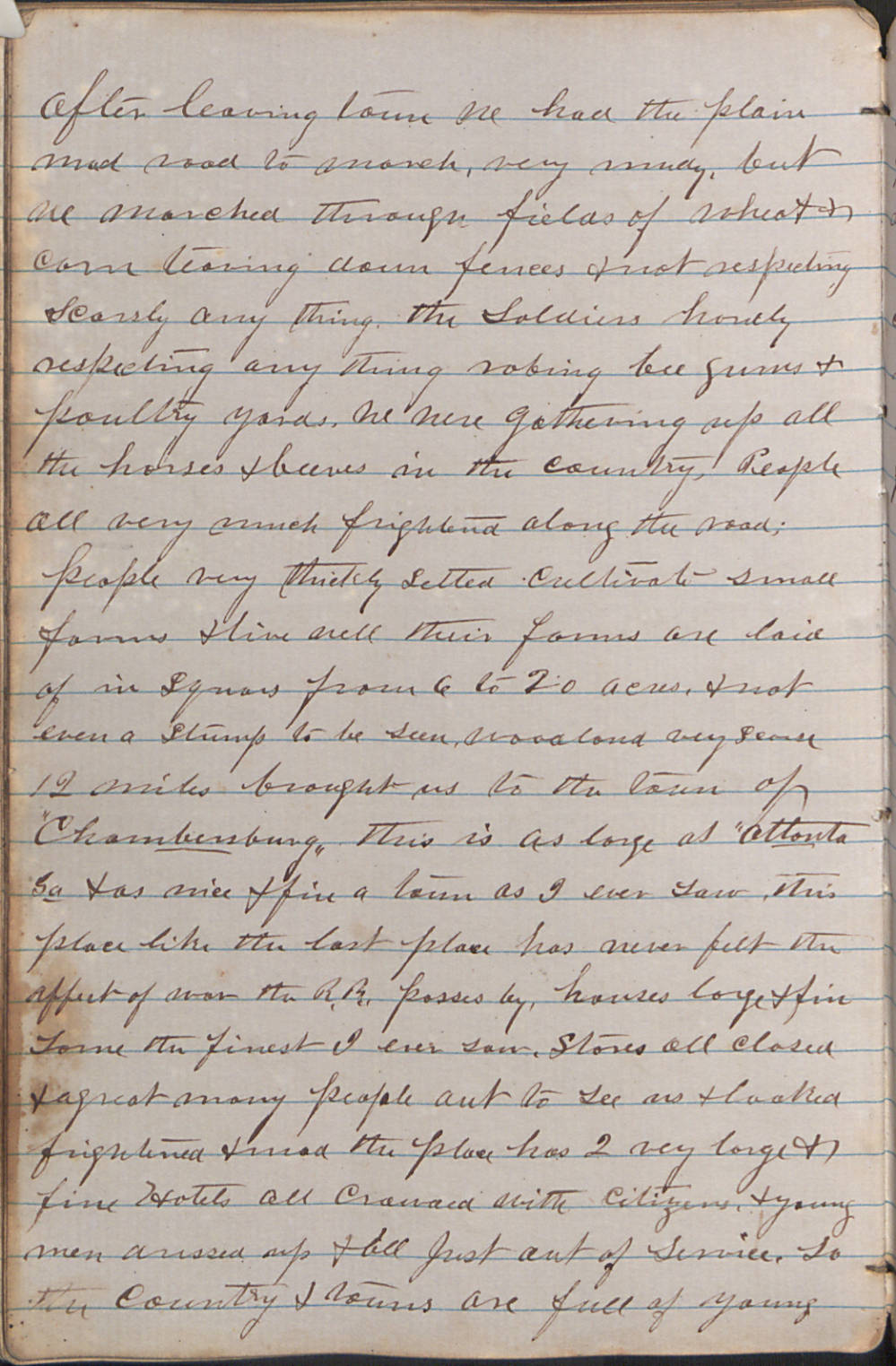 Received orders to leave at 8 A.M. Cool and pleasant day. 15th Ga in the rear. Soon in the pike and then are stopped for 2 hours and several the Q Masters and Sergn’ts armed went ahead with the Pioneers 3 miles then brought us to the beautiful town of “Greencastle” on the Harrisburg R. R. This is a fine town larger than Washington Ga houses large and fine shady streets. This town like others in this state have never felt the affect of war. The R.R. runs down main street. People strong Unionist and looked mad and sullen at our appearance a great many closed doors; stores all closed the Streets and Hotels crowded with young men just out of service. Some nice looking girls dressed very fine as evry thing is cheap. Several Federal Flags were seen the girls had them on their bonnets. We marched through quick time with music, the Depot on the north side of town was burnt and R.R. in several places. After leaving down we had the plain mud road, very mudy, but we marched through fields of wheat and corn leaving down fences and not respecting scarsly any thing. The soldiers hardly respecting anything, robing beegums and poultry yards. We were gathering up all the horses and beeves in the country. People all very much frightened along the road; people very thickly setled, cultivate small farms and live well. Their farms are laid of in squares from 6 to 20 acres and not even a stump to be seen, woodland very scarse.

12 miles brought us to the town of “Chambersburg.” This is as large as “Atlanta” Ga and as nice and fine a town as I ever saw. This place like the last place has never felt the affect of war the R.R. passes by, houses large and fin, some the finest I ever saw. Stores all closed and a great many people out to see us and looked frightened an mad. This place has 2 very large and fine Hotels all crowded with citizens and young men dressed up and all just out of service. So the country and towns are full of young men not in service, no malitia gone from this place. I saw more girls than I have seen at any one time before. Some very good looking ones. The town under martial law, guards at evry corner, so we could get nothing. The town in near two miles long, some very fine buildings in the suburbs of town. We marched 3 miles from town and left the road marched through a large cornfield 1 mile and encamped in a grove after having marched 17 miles. We burnt all the fences around the corn field and waggons and horses in the wheat and corn field, it was dark when we stopped. Several the boys gone out in the country (as evry thing is plentiful)