Item description: Letter, 8 July 1863, from William Hope Peek, assistant surgeon with the 2nd Virginia Cavalry, to his sister, Maria Peek, who was at the family’s home in Hampton, Va.  William died less than two weeks later on 19 July. 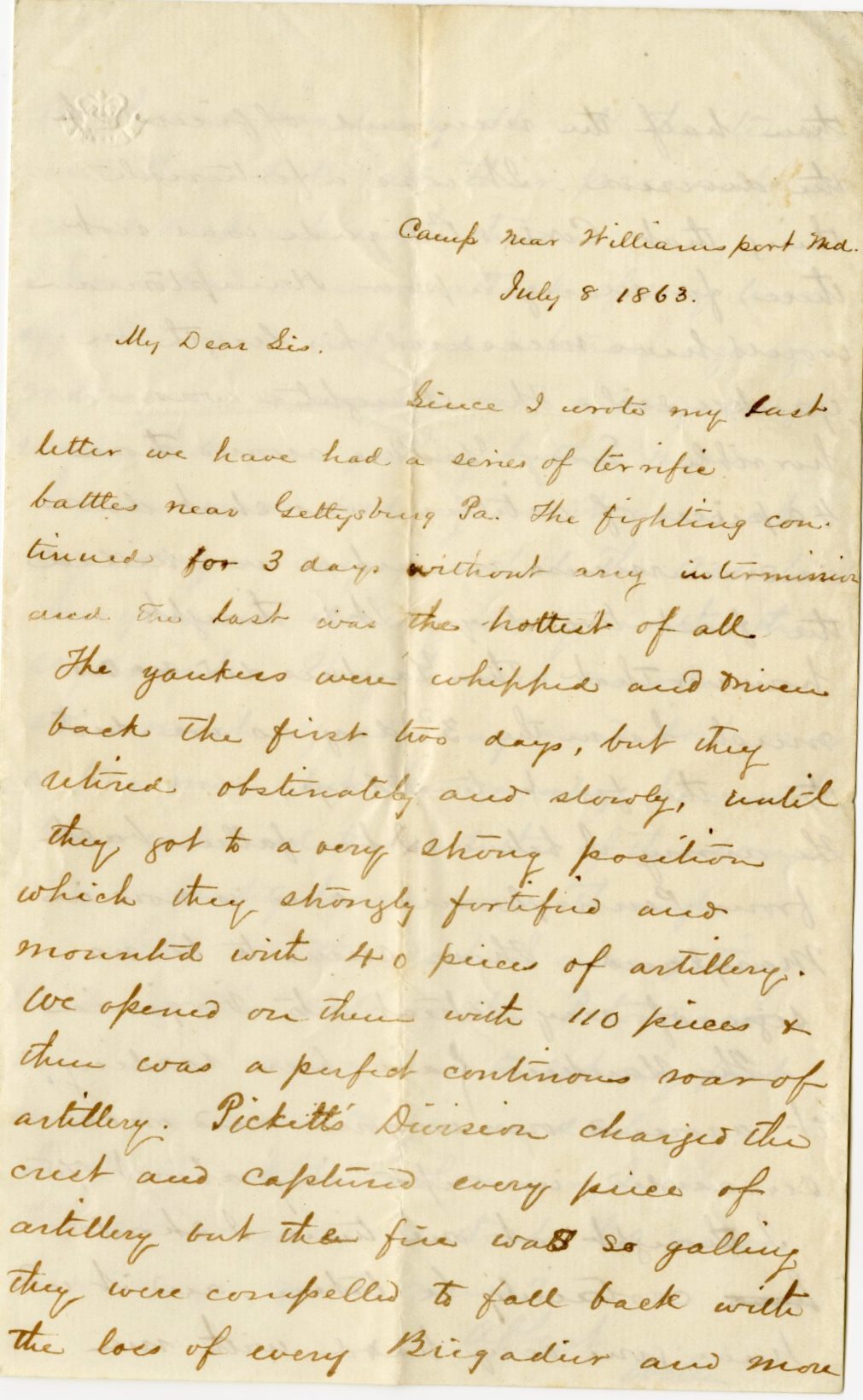 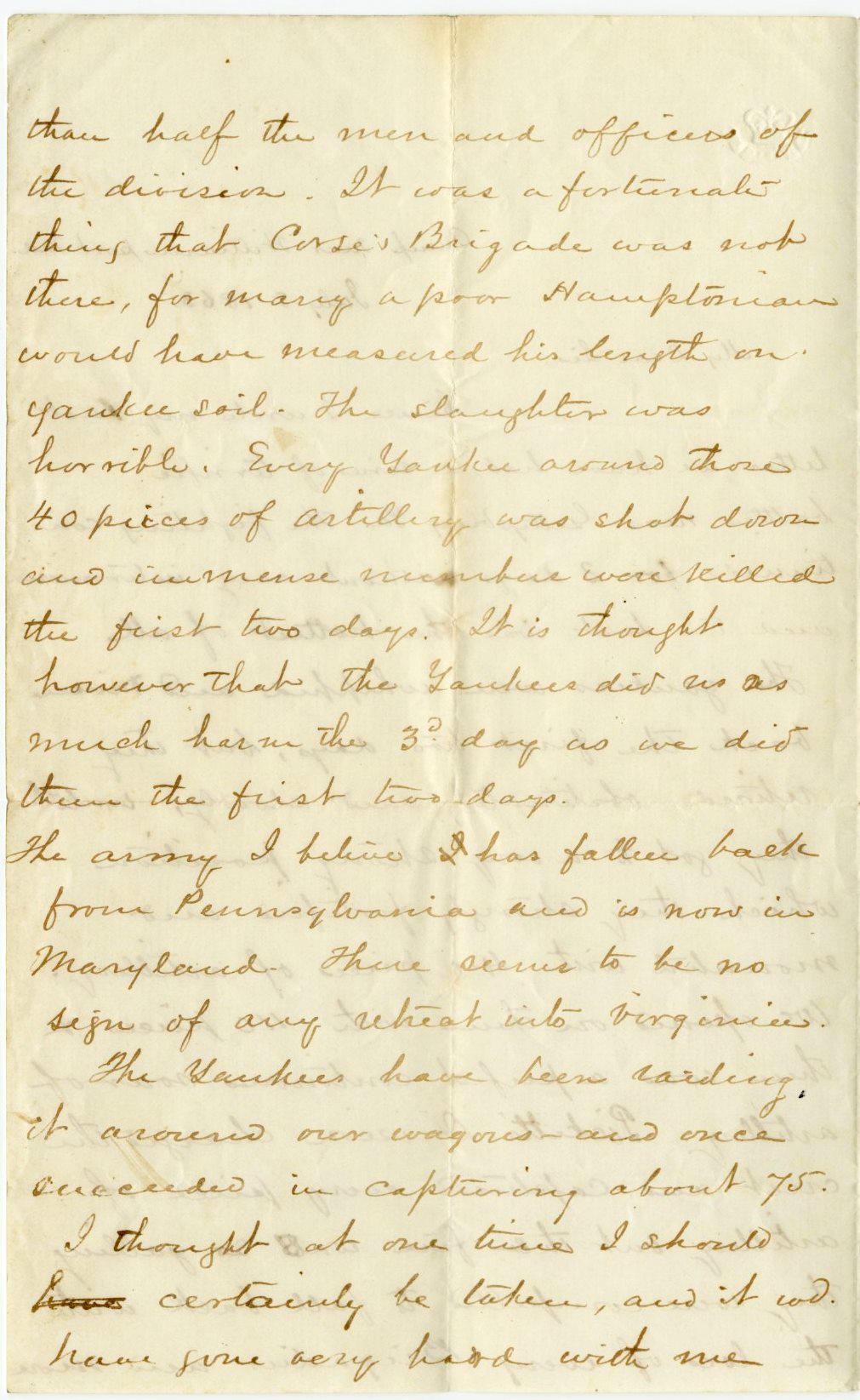 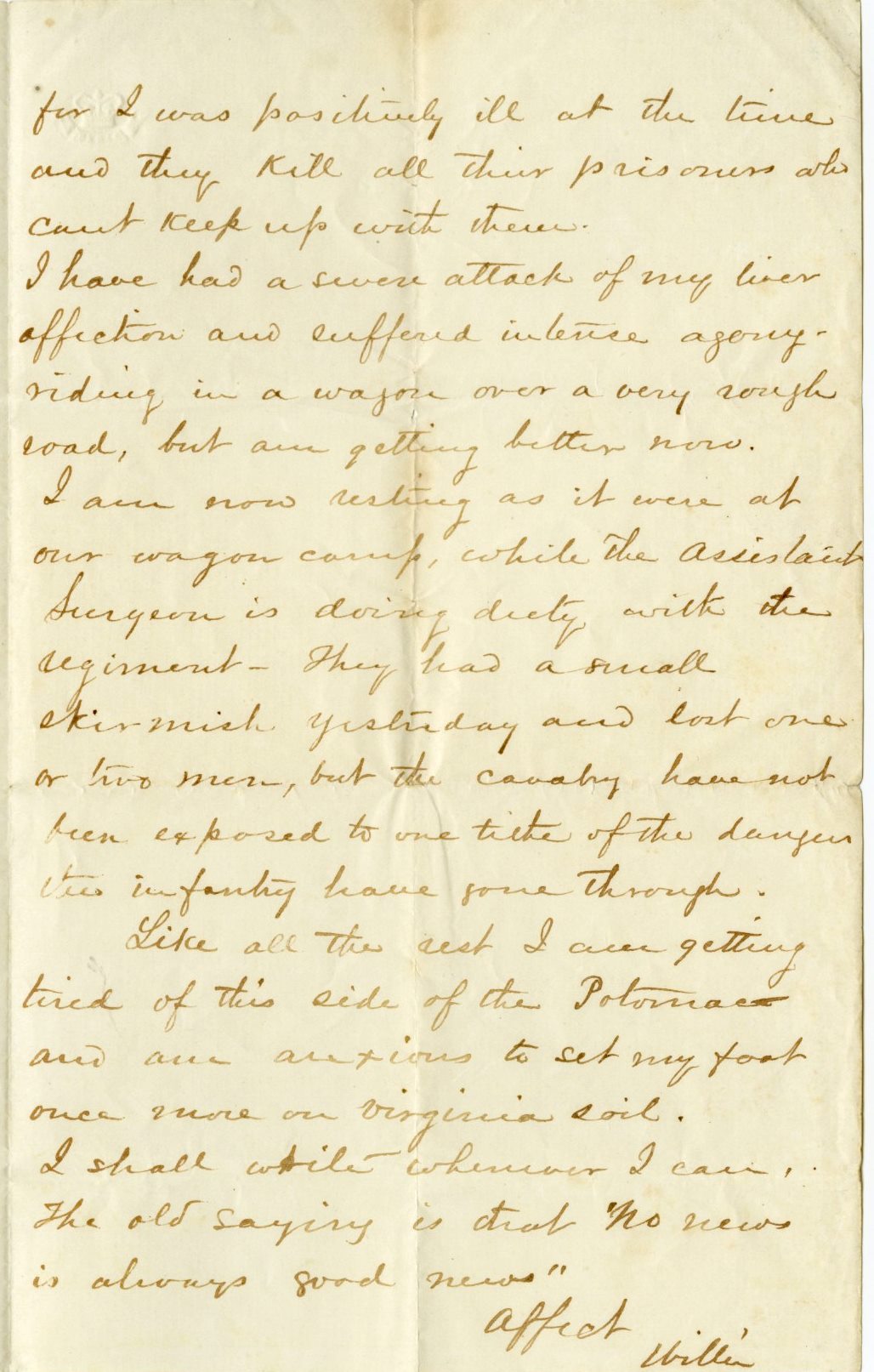 Since I wrote my last letter we have had a series of terrific battles near Gettysburg Pa. The fighting continued for 3 days without any intermission and the last was the hottest of all.

The Yankees were whipped and driven back the first two days, but they retired obstinately and slowly, until they got to a very strong position which they strongly fortified and mounted with 40 pieces of artillery. We opened on them with 110 pieces and there was a perfect continuous roar of artillery. Pickett’s Division charged the crest and captured every piece of artillery but then fire was so galling they were compelled to fall back with the loss of every Brigadier and more than half the men and officers of the division. It was a fortunate thing that Corse’s Brigade was not there, for many a poor Hamptonian would have measured his length on Yankee soil. The slaughter was horrible. Every Yankee around those 40 pieces of artillery was shot down and immense numbers were killed the first two days.

The army I believe has fallen back from Pennsylvania and is now in Maryland. There seems to be no sign of any retreat into Virginia.  The Yankees have been raiding it around our wagons and once succeeded in capturing about 75. I thought at one time I should certainly be taken, and it wd. have gone very hard with me for I was positively ill at the time and they kill all their prisoners who can’t keep up with them.

I have had a severe attack of my liver affection and suffered intense agony – riding in a wagon over a very rough road, but am getting better now. I am now resting as it were at our wagon camp, while the assistant Surgeon is doing duty with the regiment – They had a small skirmish yesterday and lost one or two men, but the cavalry have not been exposed to one tenth of the dangers the infantry have gone through.

Like all the rest I am getting tired of this side of the Potomac and am anxious to set my foot once more on Virginia soil. I shall write whenever I can. The old saying is that ‘No news is always good news”

This entry was posted in Southern Historical Collection and tagged Battle of Gettysburg, Pickett's Charge, prisoners-of-war, surgeons. Bookmark the permalink.