Item Description: Letter, dated 11 July 1863, from Eldridge B. Platt to his family, updating them on the injury he sustained at the Battle of Gettysburg and sharing his thoughts on the war. Click here for an earlier description of his injury and hospital stay. Platt (b. 1847) enlisted as a drummer in the 2nd Connecticut Light Battery on 12 August 1862. By 11 November 1862, he was serving as a cannoneer. He was discharged 10 August 1865. 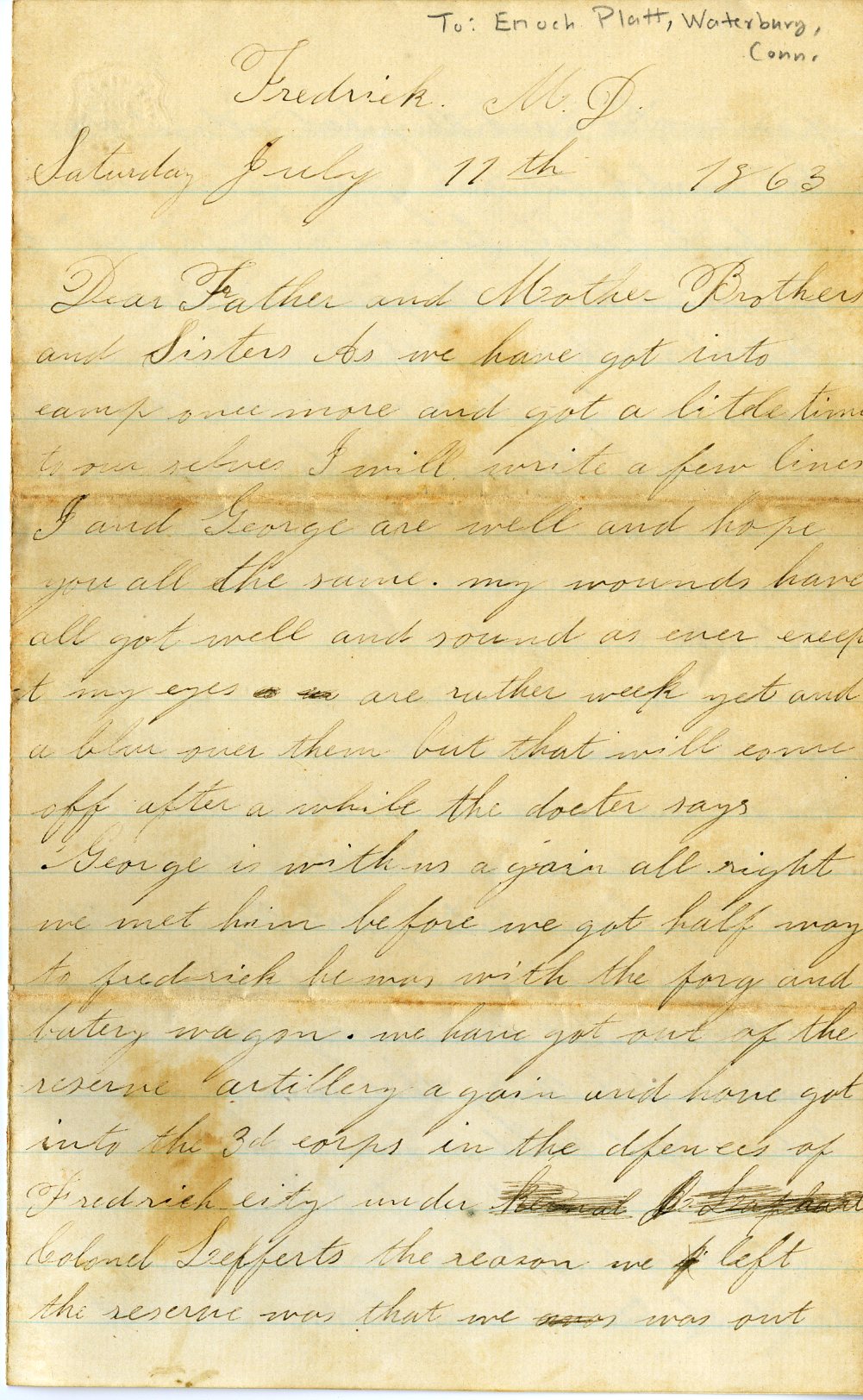 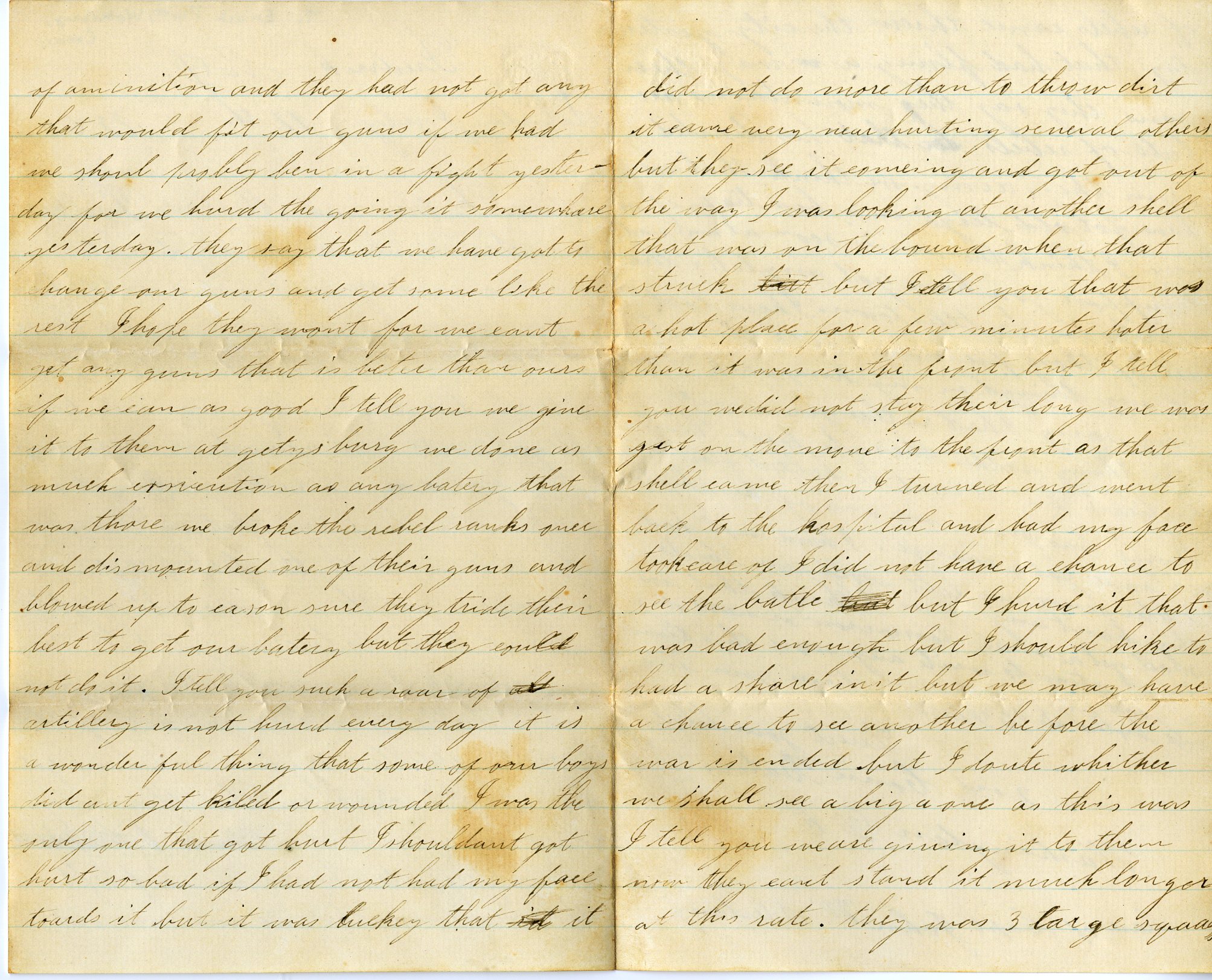 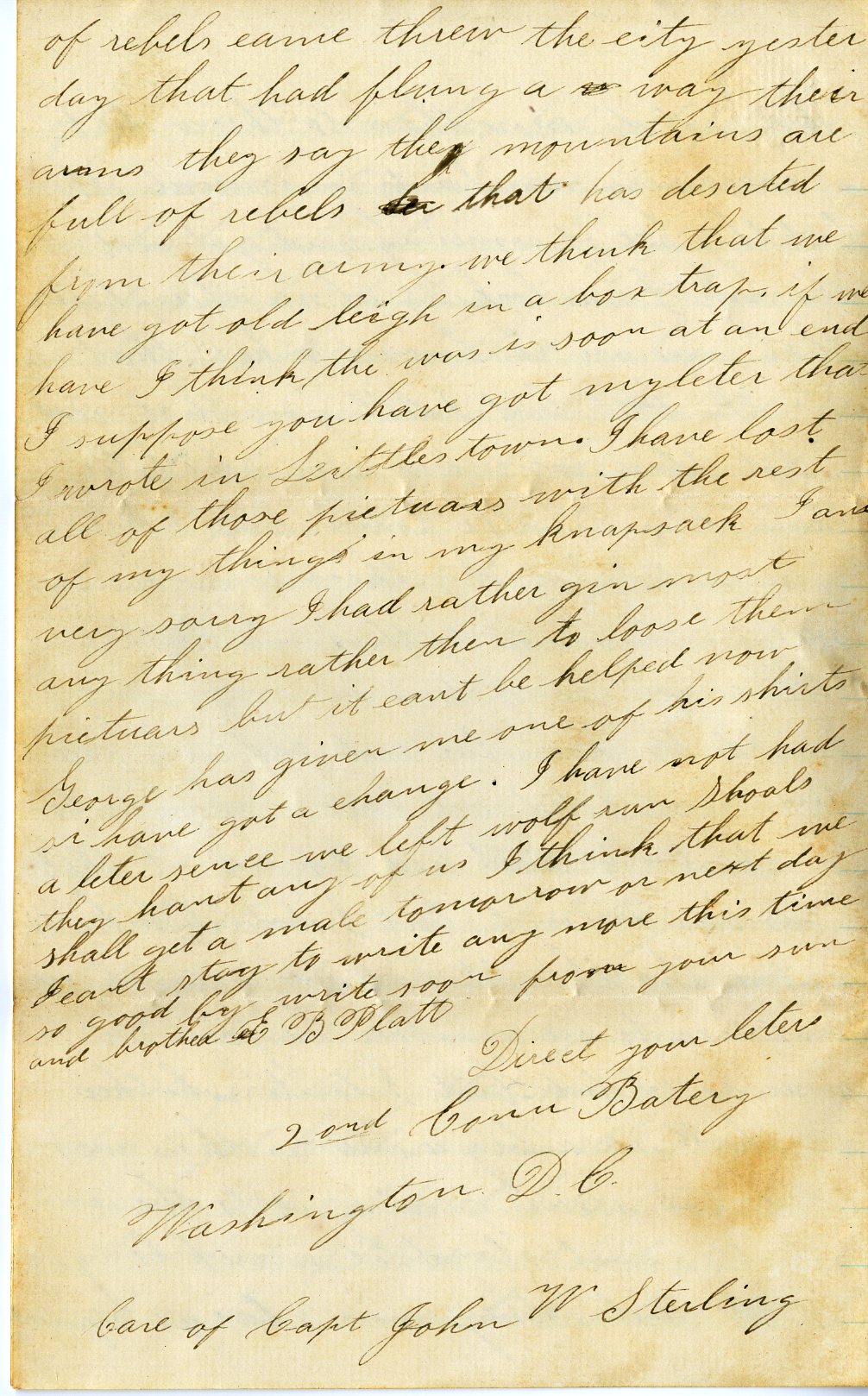 Dear Father and Mother Brothers and Sisters As we have got into camp once more and got a little time to our selves I will write you a few lines I and George are well and hope you are all the same. my wounds have all got well and sound as ever except that my eyes are rather week yet and a blur over them. but that will come off after a while the docter says.

George is with us again all right we met him before we got half way to fredrick he was with the forg and batery wagon. we have got out of the reserve artillery again and have got into the 3rd corps in the defences of Fredrick city under Colonel Leeferts the reason we left the reserve was that we was out of ammunition and they had not got any that would fit our guns if we had we shoud probly ben in a fight yesterday for we hurd the going it somewhare yesterday. they say that we have got to change our guns nd get some like the rest I hope they wont for we cant get any guns that is beter than ours if we can as good I tell you we give it to them at getysburg we done as much [exicution?] as any batery that was thare we broke the rebel ranks ones and dismounted one of their guns blowed up to [cason?] sure they tride their best to get our batery but they could not do it. I tell you such a roar of artillery is not hurd every day it is a wonder ful thing that some of our boys did not get kiled or wounded I was the only one that got hurt I shouldant got hurt so bad if I had not had my face toards it but it was luckey that it did not do more than to throw dirt it came very near hurting several others but they see it comeing and got out of the way I was looking at another shell that was on the bound when that struck but I tell you that was a hot place for a few minutes hoter than it was in the front but I tell you we did not stay their long we was gist on the move to the front as that shell came then I turned and went back to the hospital and had my face took care of I did not have a chance to see the battle but I hurd it was bad enough but I should like to had a share in it but we may have a chance to see another be fore the war is ended but I doute whither we shall see a big a one as this was I tell you we are giving it to them now they cant stand it much longer at this rate. they was 3 large squads of rebels came threw the city yesterday that had flung a way their arms they say the mountains are full of rebels that has deserted from their army. we think that we have got old leigh in a box trap. if we have I think the war is soon at an end I suppose you have got my leter that I wrote in Littles town. I have lost all of those pictures with the rest of my things in my knapsack I am very sorry I had rather gin most any thing rather then to lose them pictures but it cant be helped now George has given me one of his shirts  ai I have got a change. I have not had a letter sence we left wolf run shoals they hant any of us I think that shall get a male tomorrow or next day I cant stay to write any more this time so good by write soon from your son and brother E B Platt