20 July 1863: “Safe at Uncle Williams in Richmond, wounded in the left shoulder, but not severely and doing first rate!”

Posted on 20 Jul ’13 by Biff Hollingsworth

Item Description: Letter, 20 July 1863, from Laura Norwood to her uncle, Walter Waightstill Lenoir. In it, Laura relates the details of a letter from her cousin, Thomas “Tom” L. Norwood, who was serving in the war, and briefly mentions the conditions of home. 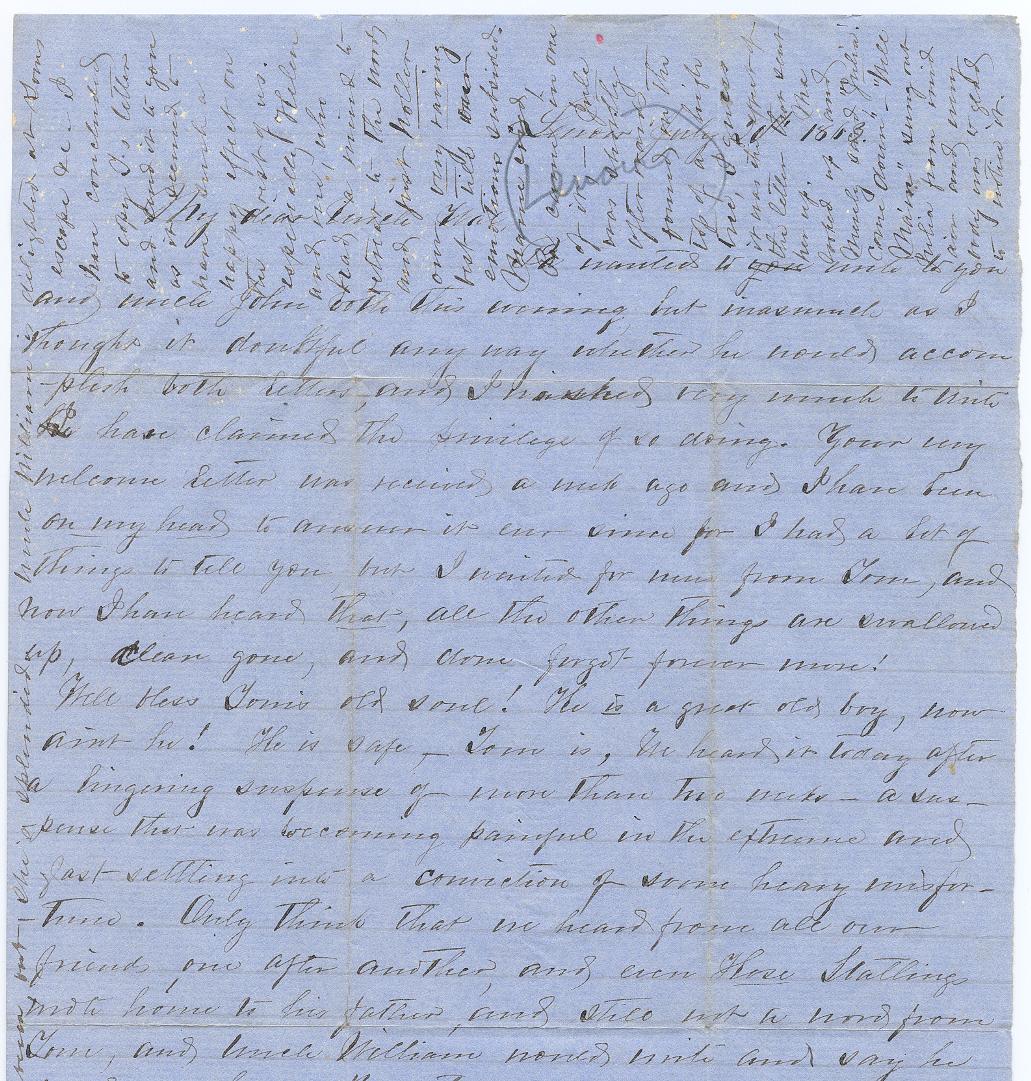 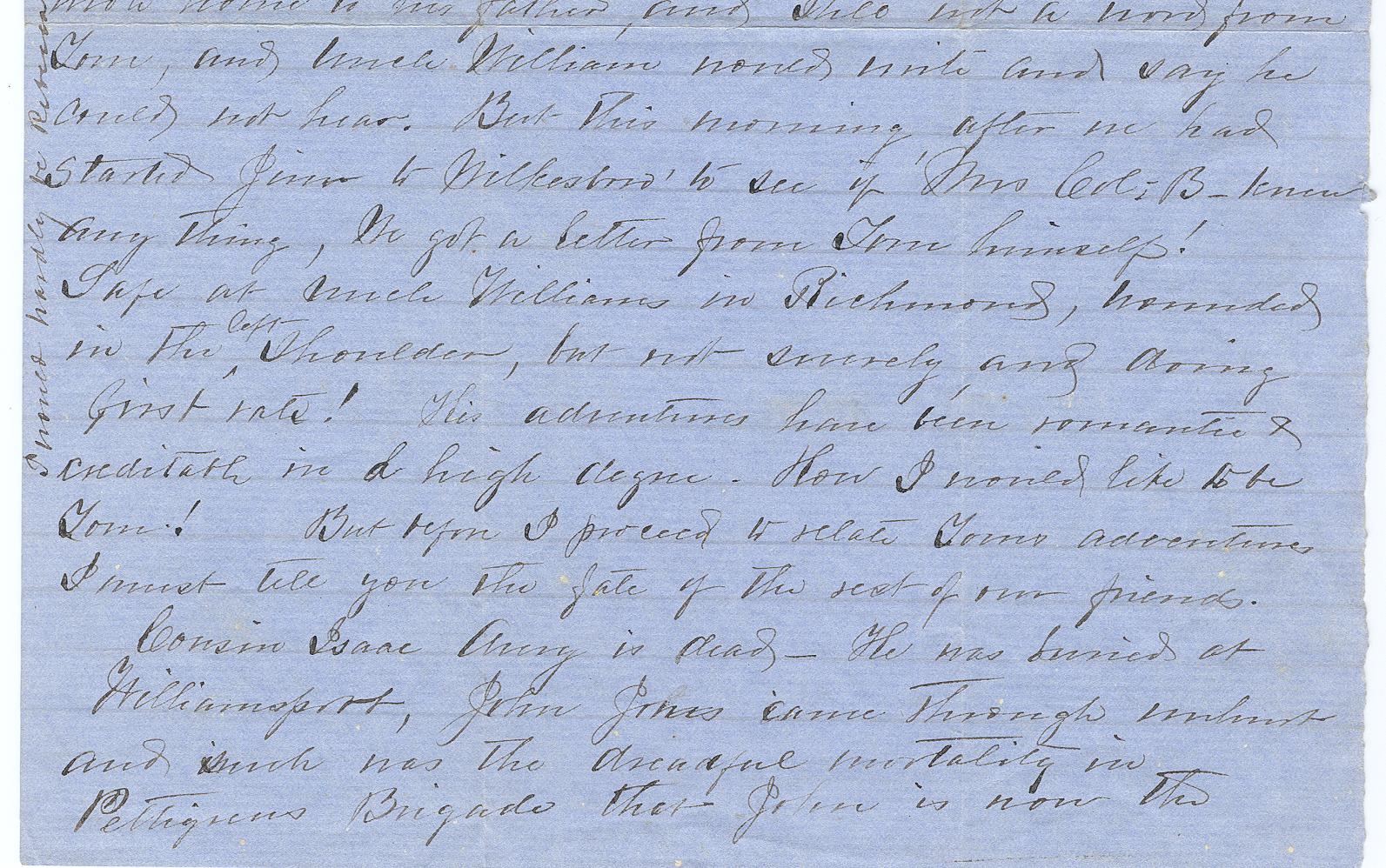 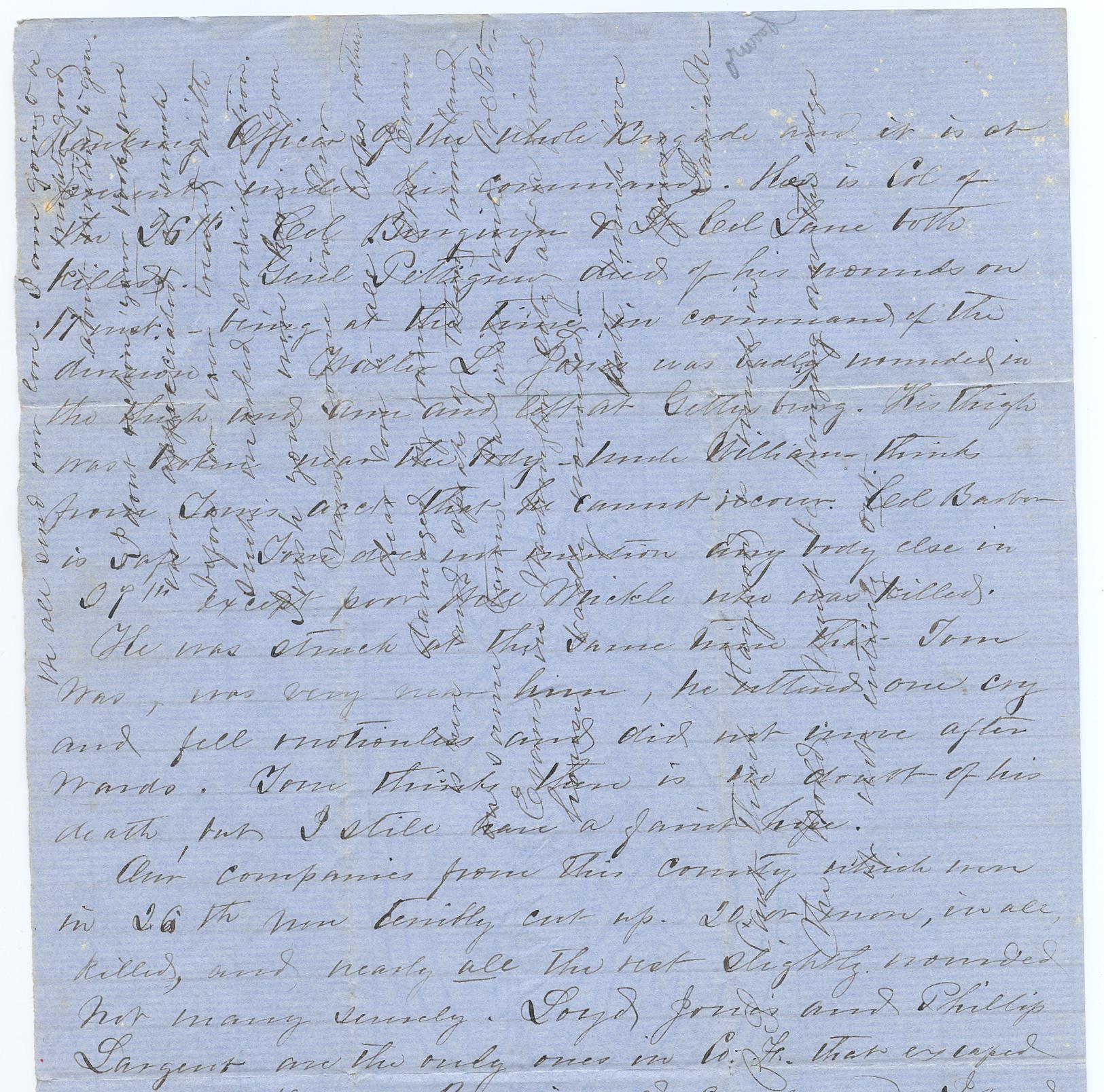 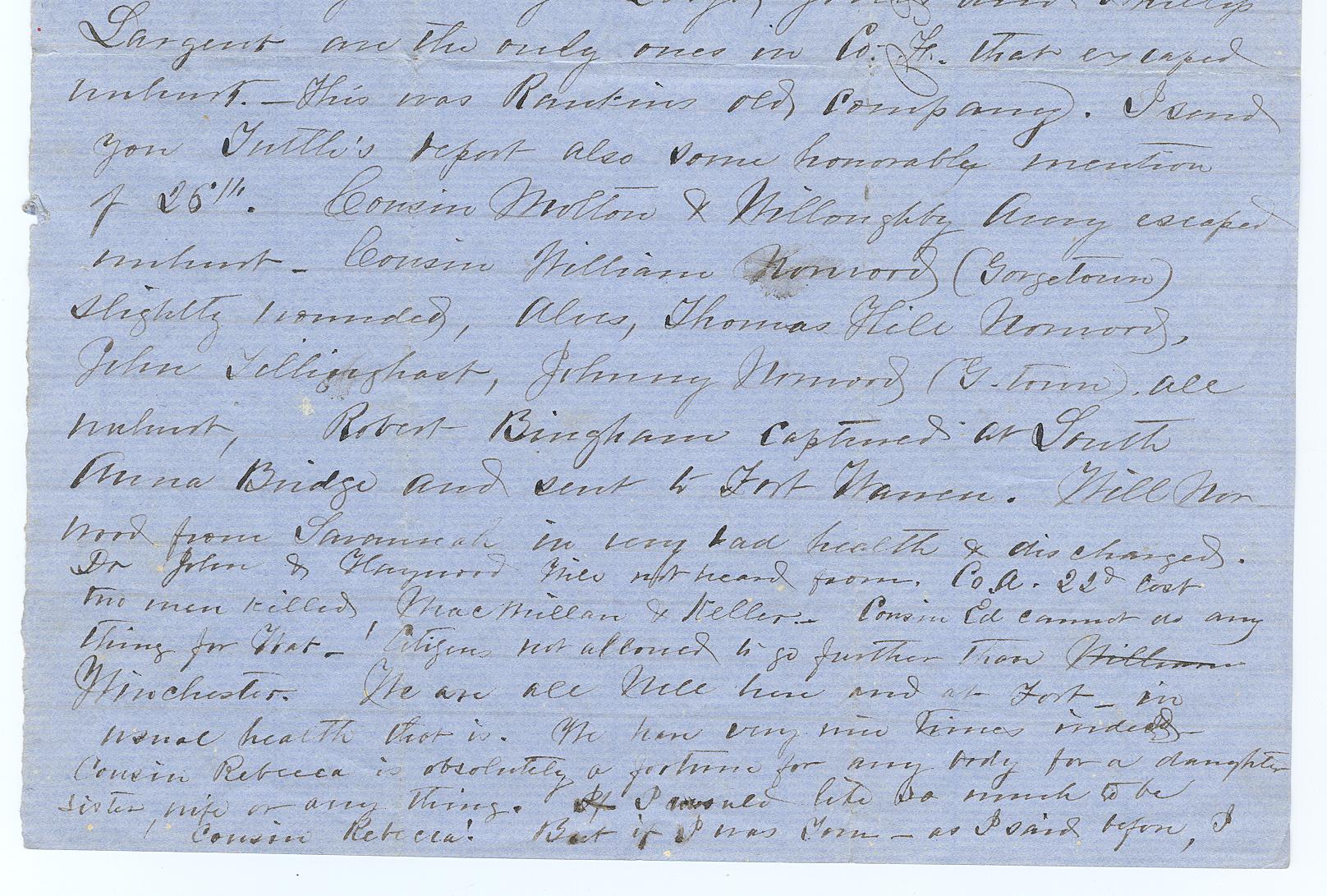 Pa wanted to write to you and uncle John both this evening but  inasmuch as I thought it doubtful any way whether he would accomplish both letters, and I wished very much to write, I have claimed the privilege of so doing. Your very welcome letter was received a week ago and I have been on my head to answer it ever since for I had a lot of things to tell you, but I waited for news from Tom, and now I have heard that, all the other things are swallowed up, clear gone, and done forgot forever more!

Well, bless Tom’s old soul! He is a great old boy, now ain’t he! He is safe _ Tom is, we heard it today after a lingering suspense of more than two weeks, a suspense that was becoming painful in the extreme and fast setting into a conviction of some heavy misfortune. Only think we heard from all our friends one after another and even Hose Stallings  wrote home to his father, and still not a word from Tom, and Uncle William would write and say he could not hear. But this morning after we had started Jim to Wilkesboro to see if Mrs. Col. B knew anything, we got a letter from Tom himself!

Safe at Uncle Williams in Richmond, wounded in the left shoulder, but not severely and doing first rate! His adventures have been romantic and creditable in a high degree. How I would like to be Tom! But before I proceed and relate Tom’s adventures I must tell you the fate of the rest of our friends.

Cousin Isaac Avery is dead – He was buried at Williamsport, John Jones came through unhurt and such was the dreadful mortality in Pettigrew’s Brigade that John is now the ranking officer of the whole Brigade and it is at present under his command. He is colonel of the 26th Col. Burgwyn  and Lt  Col. Lane both killed. Gen. Pettigrew died of wounds on the 17th inst. – being at the time in command of the division. Walter L. Jones was badly wounded in the thigh and arm and left at Gettysburg. His thigh was broken near the body.  – Uncle William  thinks from Tom’s acct that he cannot recover. Col Barber is safe. Tom does not mention anybody else in the 27th except poor Will Mickle who was killed. He was struck at the same time that Tom was, was very near him, He uttered one cry and fell motionless and did not move afterwards. Tom thinks that is no doubt of his death, but I still have a faint hope.

Our companies from this county which were in 26th were terribly cut up. 20 or more, in all, killed, and nearly all the rest slightly wounded, not many seriously. Loyd Jones and Phillip Largent are the only ones in Co. F that escaped unhurt. This was Rankin’s old company. I send you Tuttles report also some honorable mention of 26th. Cousin Nolton and Willoughby Avery escaped unhurt. Cousin William Norwood (Georgetown) slightly wounded, Also, Thomas Hill Norwood, John Tillinghast, Johnny Norwood (Georgetown) all unhurt. Robert Bingham, captured at South Anna Bridge and sent to Fort Warren. Will Norwood from Savannah in very bad health and discharged. Dr. John and Heywood not heard from. Co. A 22nd lost two men. Killed, McMillan and  Keller. Cousin Ed cannot do anything for Walter. Citizens not allowed to go further than Winchester. We are all well here and at Fort – in usual health, that is. We have very nice time indeed – Cousin Rebecca is absolutely a fortune for any body for a daughter sister, wife, or any thing. I would like so much to be Cousin Rebecca! But if I was Tom – as I said before, I would hardly be Rebecca, but, she is splendid. Uncle William is delighted at Tom’s escape, etc. I have concluded to copy Tom’s letter and send it to you as it seemed to have such a happy effect on the rest of us, especially Helen and me, who had a mind to retreat to the woods and first holler our very raving best till our emotions subsided. Mamie cried, Pa came in one of it, – Jule was hardly afterwards found in the top of a high tree, I guess it was the effect of the letter that send her up. Ma looked up and merely said “Julia! Come down” – “Well, Ma’m” sung out Julia from mid air and every body was so glad to notice it.

We all send our love. I am going to be mighty good about writing to you. I don’t see how your books were ever appreciated as much before or ever treated with such marked consideration. I wish you were here. You must come and our dear love to all. Crops rather damaged by rain. Mr. Evans is here and speak of taking more land and some forms – Pa will write Col Peter Evans in Washington City at a friend house badly wounded.

P. S. Can’t think Haywood is much in the world. Must be hanging over the edge if not entirely out.