20 August 1863: “…there can never be any question of recon-struction, there may be of submission & this will hardly happen unless our army deserts & goes home.” 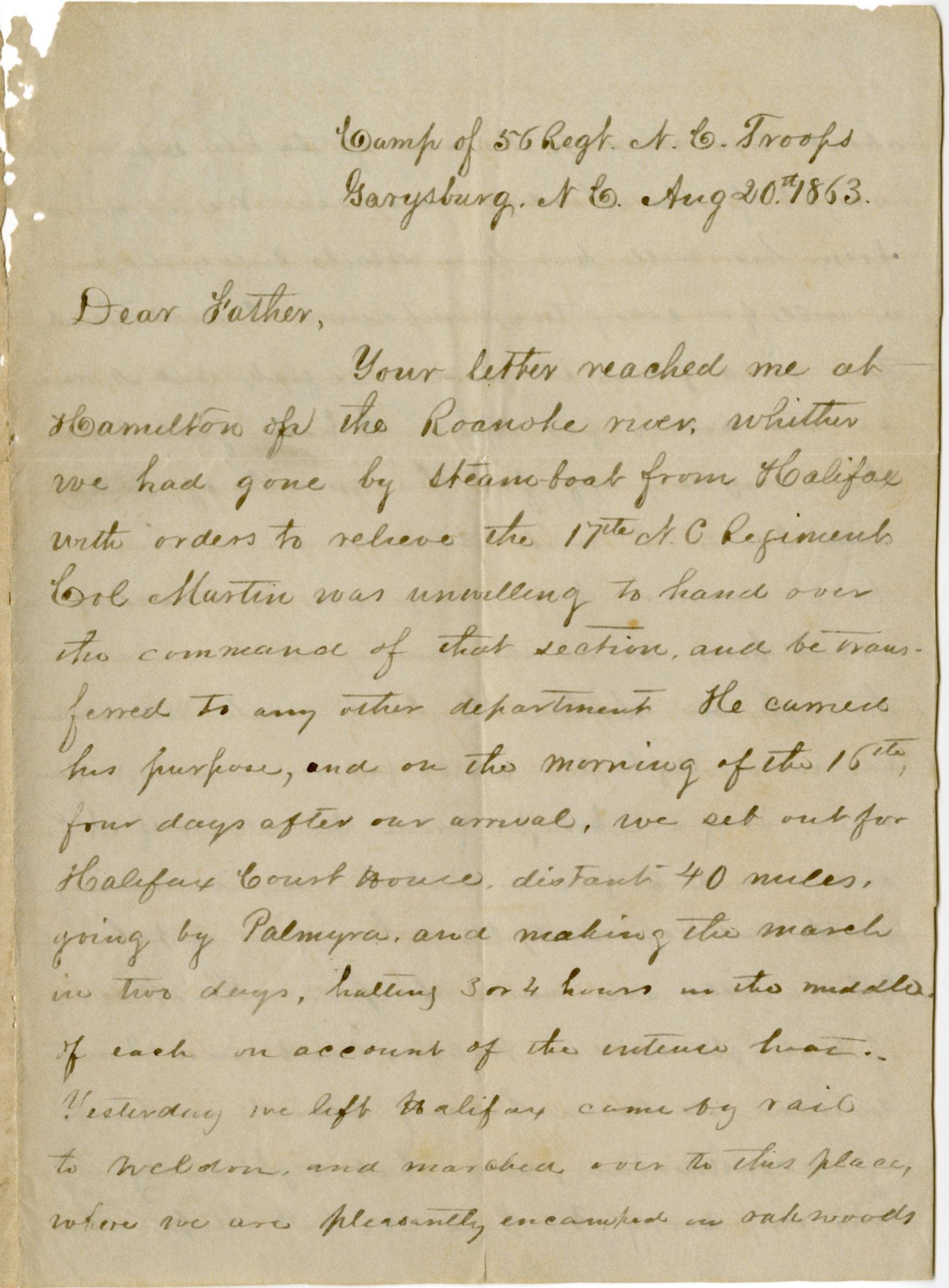 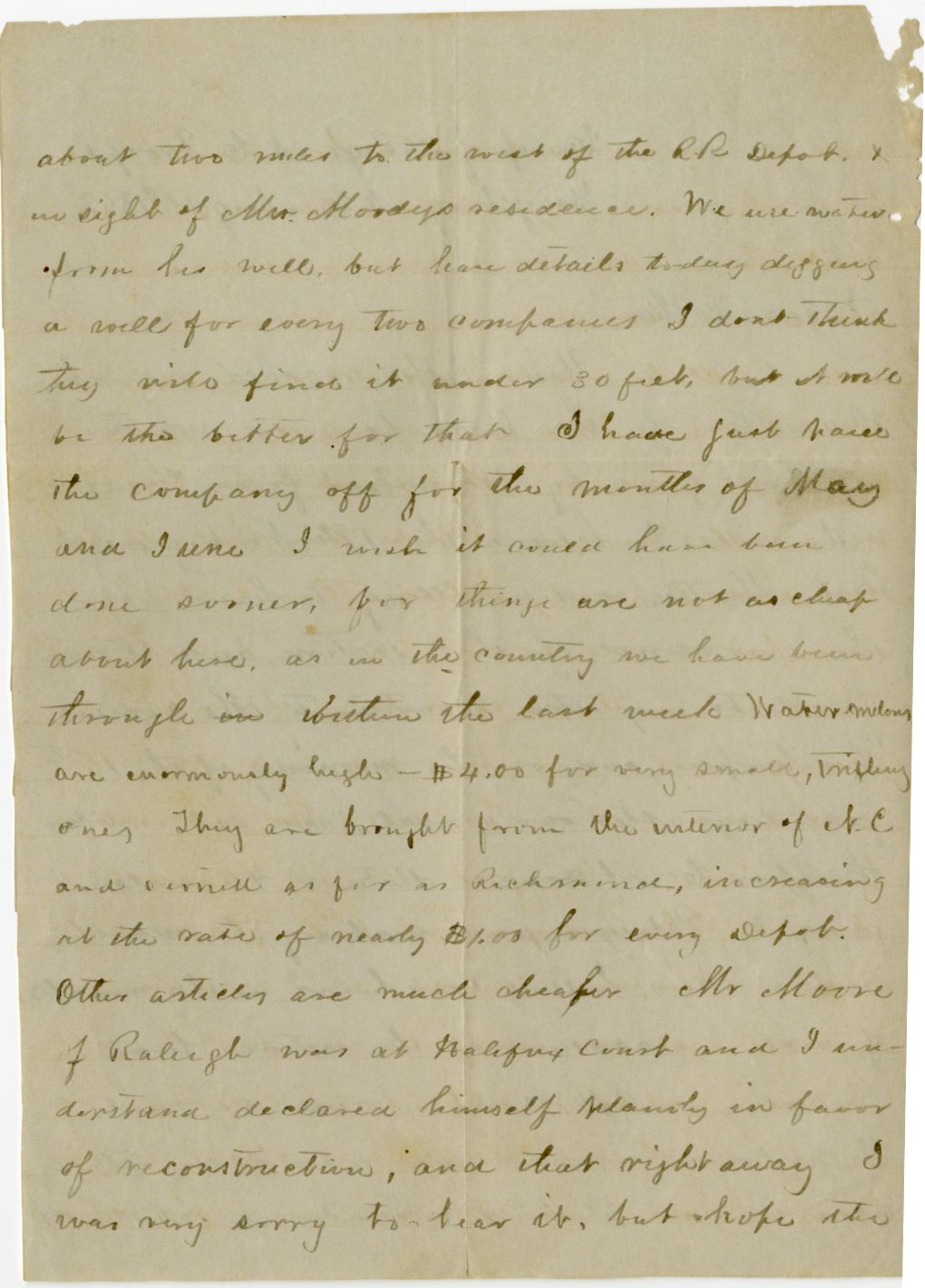 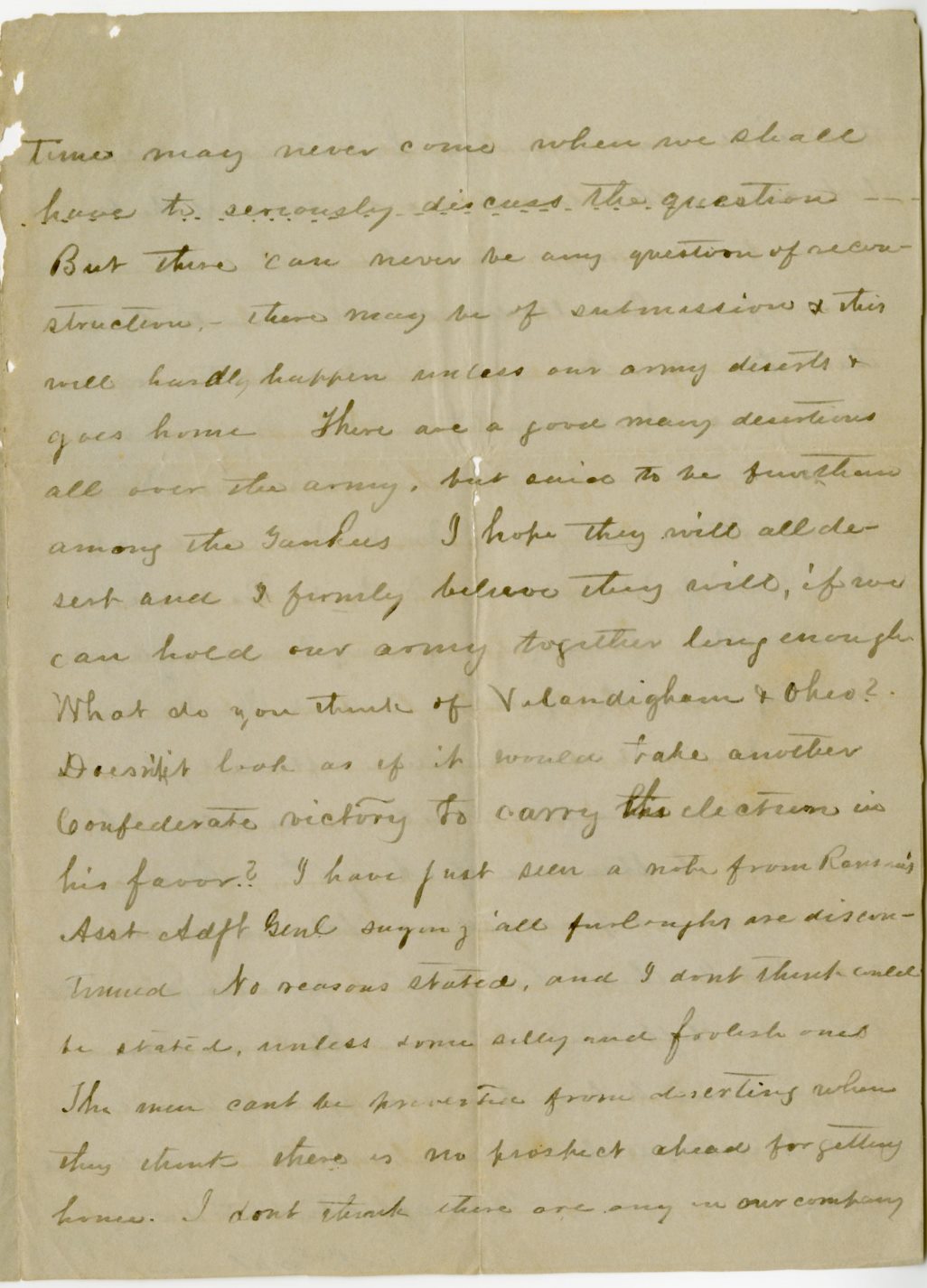 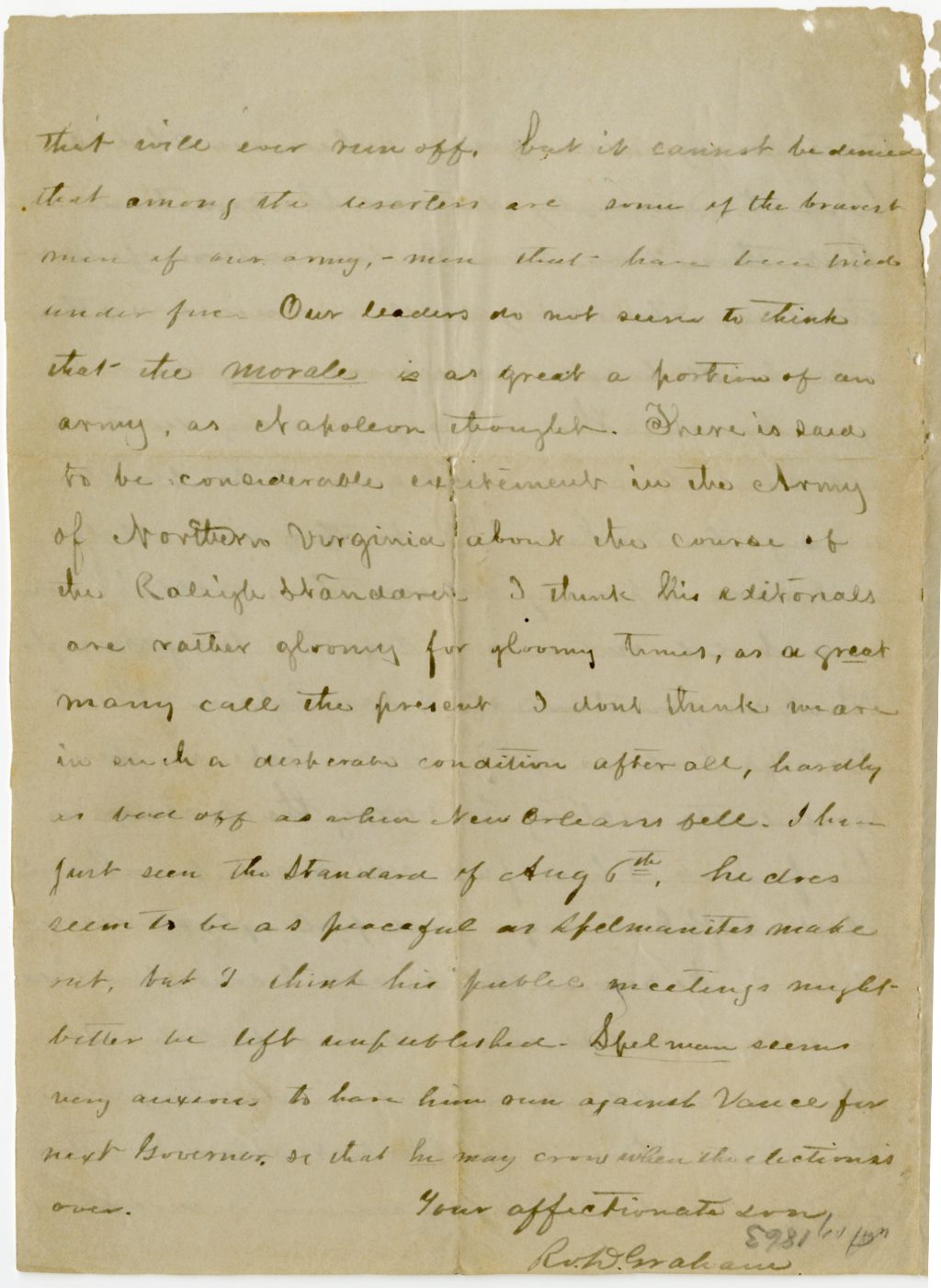 Your letter reached me at Hamilton on the Roanoke river, whither we had gone by steamboat from Halifax with orders to relieve the 17th N.C. Regiment.  Col. Martin was unwilling to hand over the command of that section, and be trans-ferred to any other department.  He carried his purpose, and on the morning of the 16th four days after our arrival, we set out for Halifax Court House, distant 40 miles, going by Palmyra, and making the march in two days, halting 3 or 4 hours in the middle of each on account of the intense heat.  Yesterday we left Halifax came by rail to Weldon, and marched over to this place where we are pleasantly encamped in oak woods about two miles to the west of the R.R. depot & in sight of Mrs. Moody’s residence.  We are watered from his well, but have details today digging a well for every two companies.  I don’t think they will find it under 30 feet, but I will be the better for that.  I have just paid the company off for the months of May and June.  I wish it could have been done sooner, for things are not as cheap about here as in the country we have been through [?] the last week.  Watermelons are enormously high – $4.00 for very small, trifling ones.  They are brought from the interior of N.C. and carried as far as Richmond, increasing at the rate of nearly $1.00 for every depot.  Other articles are much cheaper.  Mr. Moore of Raleigh was at Halifax Court and I un-derstand declared himself plainly in favor of reconstruction, and that right away. I was very sorry to hear it, but hope the times may never come when we shall have to seriously discuss the question.  But there can never be any question of recon-struction, there may be of submission & this will hardly happen unless our army deserts & goes home.  There are a good many desertions all over the army, but said to be further among the Yankees.  I hope they will all de-sert and I firmly believe they will, if we can hold our army together long enough.  What do you think of Valandigham & Ohio? Doesn’t it look as if it would take another Confederate victory to carry the election in his favor? I have just seen a note from Ransom’s Asst. Adjt. Genl saying ‘all furloughs are discon-tinued.  No reasons stated, and I don’t think could be stated, unless some silly and foolish ones.  The men can’t be prevented from deserting when they think there is no prospect ahead for getting home.  I don’t think there are any in our company that will ever run off, but it cannot be denied that among the deserters are some of the bravest men of our army – men that have been tried under fire.  Our leaders do not seem to think that the morale is as great a portion of an army, as Napoleon thought.  There is said to be considerable excitement in the Army of Northern Virginia about the course of the Raleigh Standard.  I think his editorials are rather gloomy for gloomy times, as a great many call the present.  I don’t think we are in such a desperate condition after all, hardly as bad off as when New Orleans fell.  I have just seen the Standard of Aug. 6th, – he does seem to be as peaceful as Spelmanites make out, but I think his public meetings might better be left unpublished.  Spelman seems very anxious to have him run against Vance for next Governor, so that he may crow when the election is over.