3 September 1863: “In the Battle of Gettysburg I lost two of my best friends, Conl. Avery & Capt. Burns. I know the loss of your son has been a soar and bitter trial to you, and not only to you, but all your family.”

Posted on 3 Sep ’13 by Biff Hollingsworth

More about Isaac E. Avery:
Isaac Erwin Avery (1828-1863), the fourth son of Isaac Thomas and Harriet Erwin Avery, was born at Swan Ponds on 20 December 1828. He attended the University of North Carolina for one year in 1847, but left to manage a plantation for his father in Yancey County, N.C. He formed a partnership with Charles F. Fisher of Salisbury and Samuel McDowell Tate of Morganton to act as contractors in the building of the Western North Carolina Railroad in the mid 1850s. Following the outbreak of the Civil War, Isaac and his brother Alphonso Calhoun Avery raised Company E in Burke County for the 6th North Carolina Regiment. Isaac commanded the company, which fought in the Battle of First Manassas and the Battle of Seven Pines. In the summer of 1862, he was promoted to colonel. He was wounded at Gaines Farm that summer and was out of action until the fall. Following the reorganization of the army after the Battle of Fredericksburg, Isaac’s regiment was placed under the command of General Robert F. Hoke, and Isaac took command of Hoke’s Brigade when the general was injured at the Battle of Chancellorsville in May 1863. On 3 July 1863, the second day of the Battle of Gettysburg, Isaac led two regiments against the Union position at Cemetery Hill. He was struck by a bullet at the base of the neck and died on the battlefield. Avery was buried in Williamsport, but, after the war, his body was moved without his family’s consent to a Confederate cemetery at an unknown location. 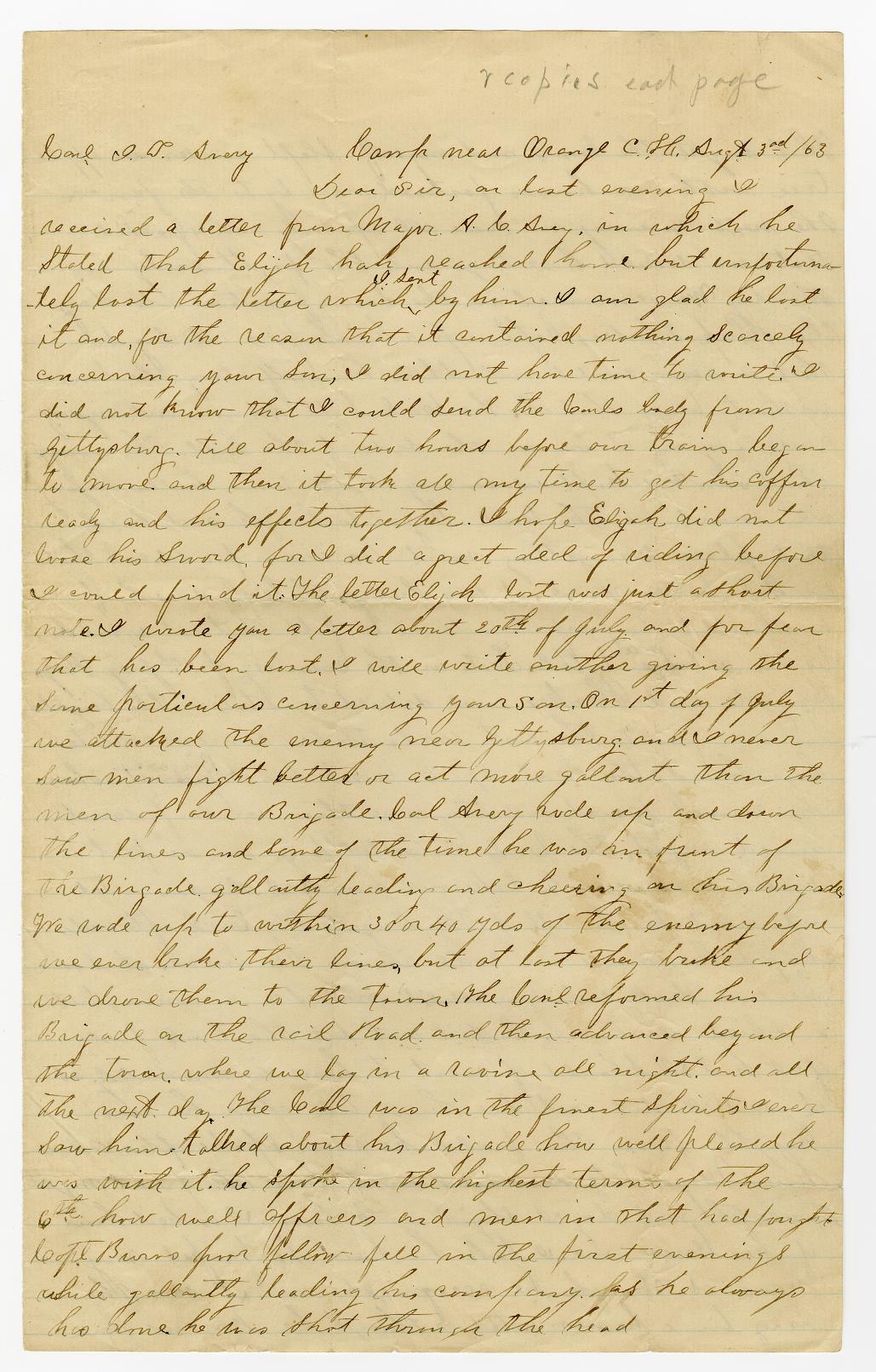 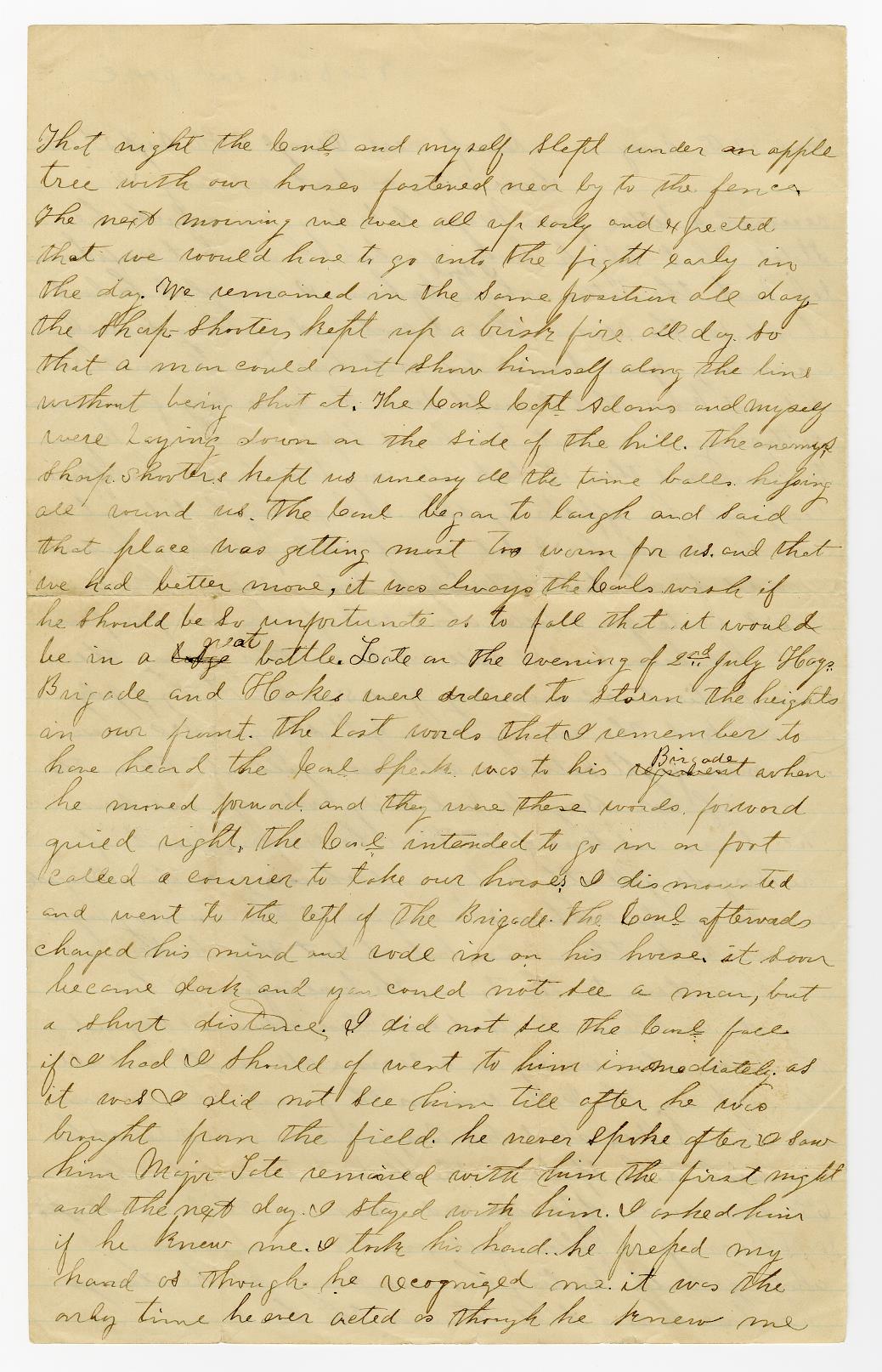 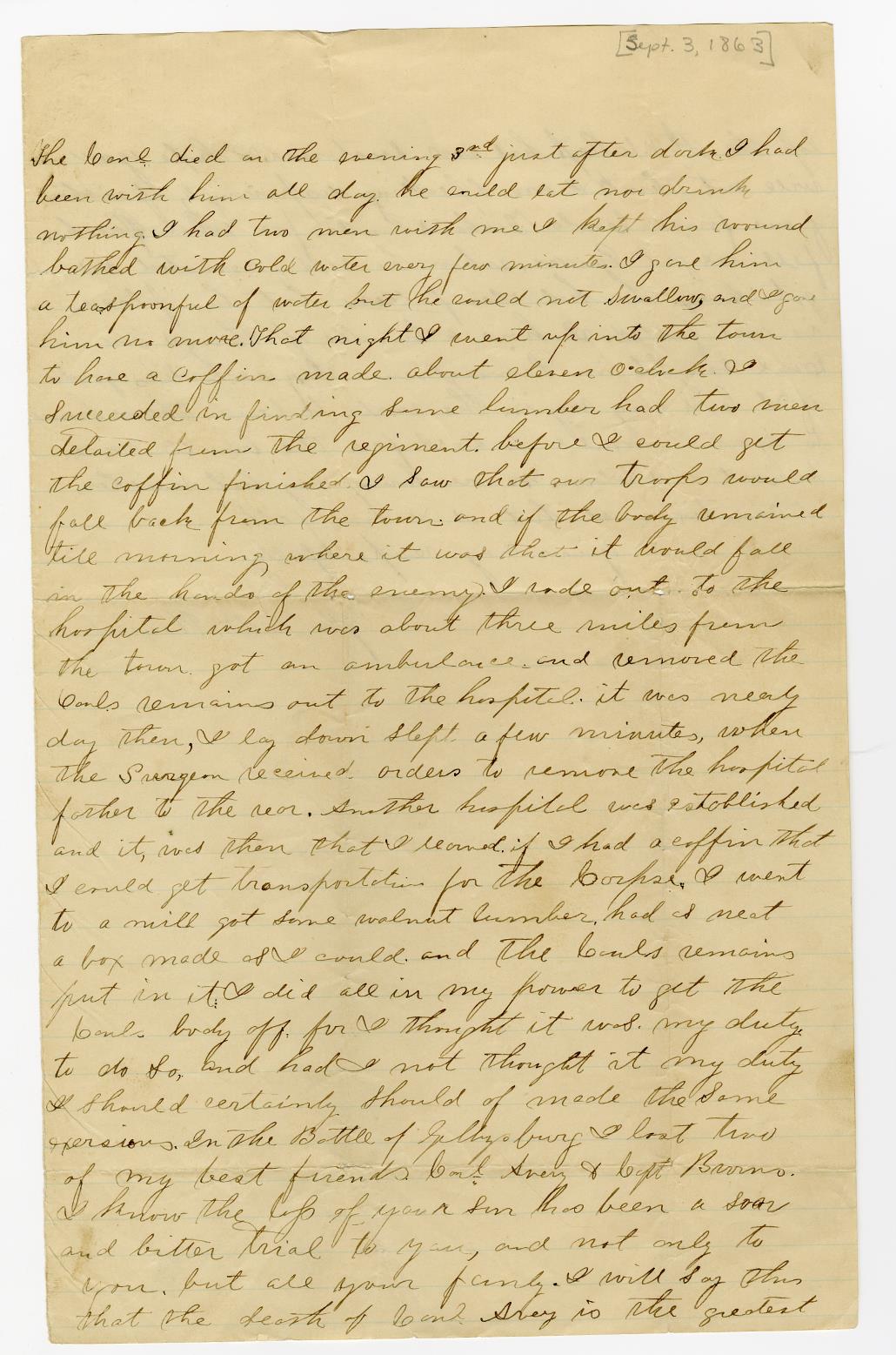 Dear Sir, on last evening I received a letter from Major A C Avery, in which he stated that Elijah had reached home, but unfortunately lost the letter which I sent by him.  I am glad he lost it and, for the reason that it contained nothing scarecly concerning your son, I did not have time to write.  I did not know that I could send the Conls. body from Gettysburg till about two hours before our train began to move and then it took all my time to get his coffin ready and his effects together.  I hope Elijah did not loose his sword for I did a great deal of riding before I could find it.  The letter Elijah lost was just a short note.  I wrote you a letter about 20th of July and for fear that has been lost, I will write another giving the same particulars concerning your son.  On 1st day of July we attacked the enemy near Gettysburg and I never saw men fight better or act more gallant than the men of our Brigade.  Col Avery rode up and down the lines and some of the time he was on front of the brigade gallantly leading and cheering on his Brigade.  We rode up to within 30 or 40 yds of the enemy before we ever broke their lines, but at last they broke and we drove them to the town. The Conl. reformed his Brigade on the rail road and then advanced beyond the town, where we lay in a ravine all night and all the next day. The Conl. was in the finest spirits I ever saw him, talked about his Brigade how well pleased he was with it. he spoke in the highest terms of the 6th, how well officers and men in that had fought. Capt. Burns poor fellow fell in the first evenings while gallantly leading his company, as he always has done. he was shot through the head.

That night the Conl. and myself slept under an apple tree with our horses fastened near by to the fence. The next morning we were all up early and expected that we would have to go into the fight early in the day. We remained in the same position all day, the sharpshooters kept up a brisk fire all day, so that a man could not show himself along th eline without being shot at. The Conl., Capt. Adams and myself were laying down on the side of the hill. The enemy’s sharpshooters kept us uneasy all the time balls hissing all round us. The Conl. began to laugh and said that place was getting most too warm for us, and that we had better move, it was always the Conl.’s wish if he should be so unfortunate as to fall that it would be in a great battle. Late in the evening of 2nd July, Hays’ Brigade and Hoke’s were ordered to storm the heights on our front. The last words that I remember to have heard the Conl. speak was to his Brigade when he moved forward and they were these words, forward guide right, the Conl. intended to go in on foot called a courier to take our horses. I dismounted and went to the left of the Brigade. The Conl. afterwards changed his mind and rode in on his horse. it soon became dark and you could not see a man, but a short distance. I did not see the Conl. face if I had I should of went to him immediately, as it was I did not see him till after he was brought from the field. he never spoke after I saw him. Major Tate remained with him the first night and the next day, I stayed with him. I asked him if he knew me. I took his hand. he pressed my hand as though he recognized me. it was the only time he ever acted as though he knew me.

The Conl. died on the evening 3rd just after dark. I had been with him all day. he would eat nor drink nothing. I had two men with me I kept his wound bathed with cold water every few minutes. I gave him a teaspoonful of water but he would not swallow, and I gave him no more. That night I went up into the town to have a coffin made about eleven o’clock. I succeeded in finding some lumber had two men detailed from the regiment before I could get the coffin finished. I saw that our troops would fall back from the town and if the body remained till morning, where it was that it would fall in the hands of the enemy. I rode out to the hospital which was about three miles from the town got an ambulance and removed the Conls. remains out to the hospital. it was nearly day then, I lay down slept a few minutes, when the surgeon received orders to remove the hospital farther to the rear. Another hospital was established and it was then that I learned if I had a coffin that I could get transportation for the corpse. I went to a mill got some walnut lumber, had as neat a box made as I could, and the Conls. remains put in it. I did all in my power to get the Conls. body off for I thought it was my duty to do so, and had I not thought it my duty I should certainly should of made the same exersions. In the Battle of Gettysburg I lost two of my best friends, Conl. Avery & Capt. Burns. I know the loss of your son has been a soar and bitter trial to you, and not only to you, but all your family. I will say this that the death of Conl. Avery is the greatest loss the 6th Regt. has ever sustained. I hope you will not think I am speaking dispairingly of either of our former Conls. Fisher & Pender, for when Fisher fell we got Pender, when he was promoted we got Avery. he has also fallen but his place is not filled. I have a bundle of things the Conl. bought in Pennsylvania they are ladies goods if I had any way in the world to send them home to you I would do so. I fear the bundle will be lost or stolen. We are having very hot weather at this time as hot as I ever felt.