Item description:  Letter, dated 8 September 1863, from John S. Henderson to his mother, Mary Ferrand Henderson.  He writes while a student at Chapel Hill, discussing recent casualties of men from Rowan county, boarding costs and options, and his desire to enter into the “signal corps” when military service is required of him. 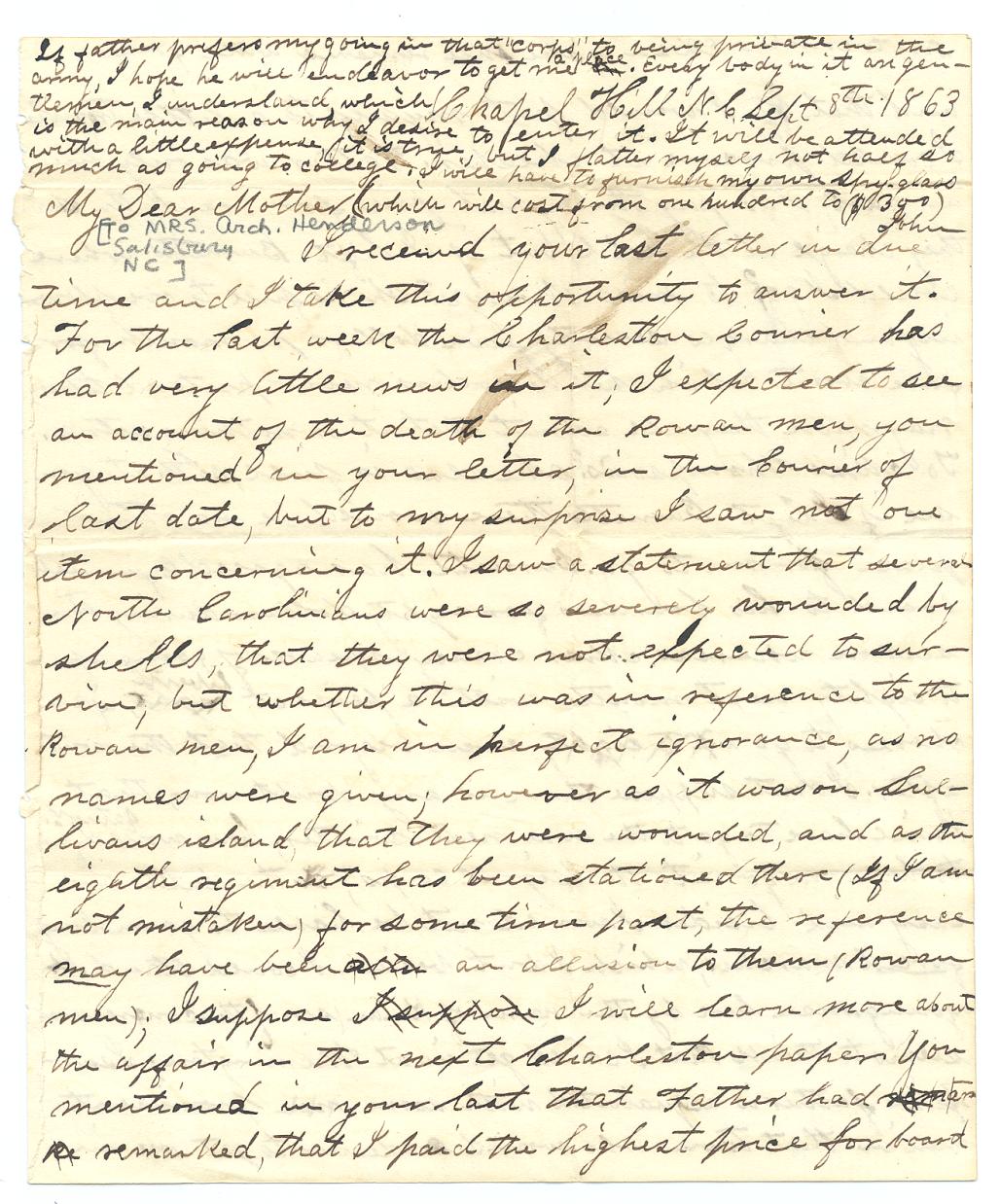 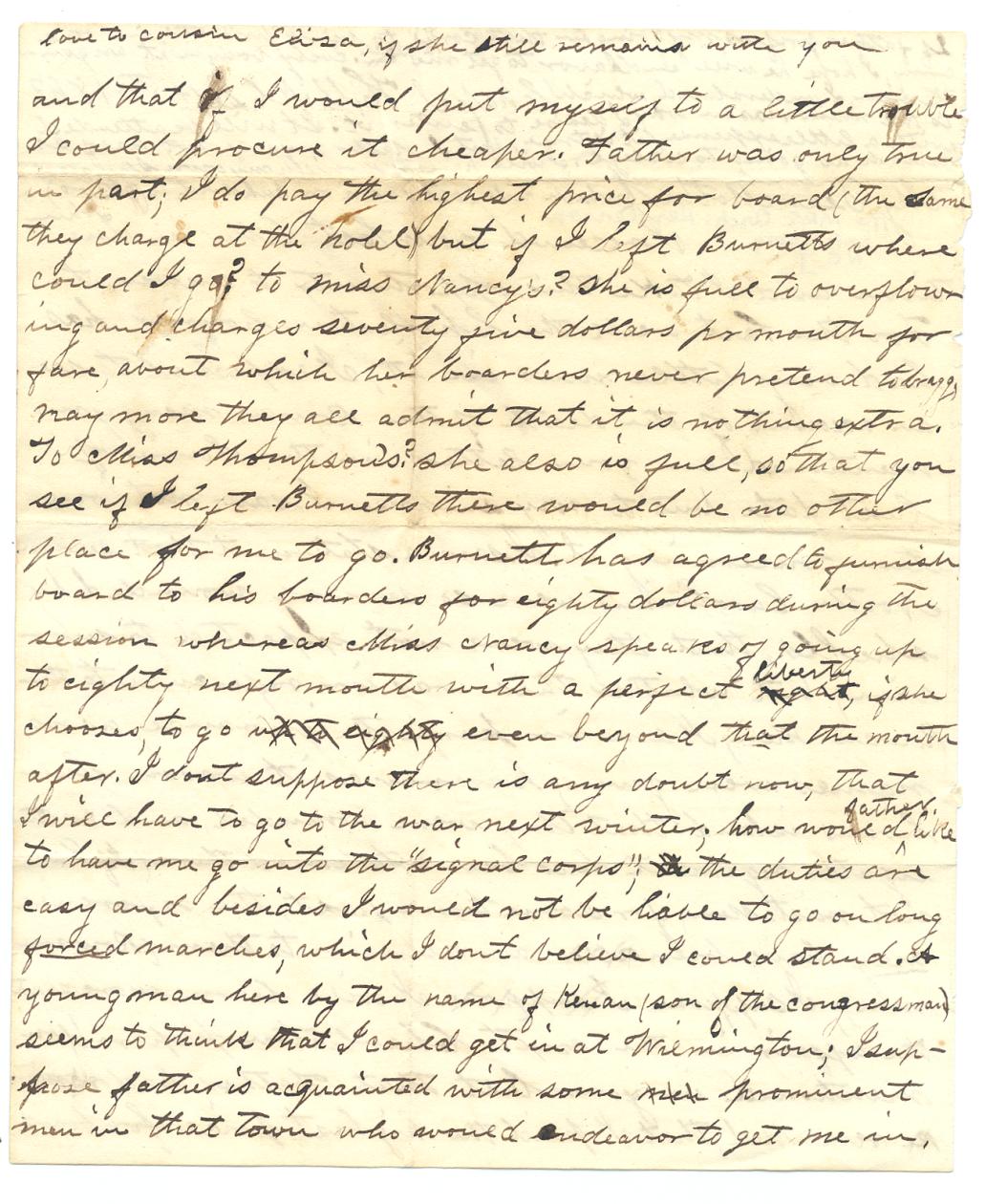 I received your last letter in due time and I take this opportunity to answer it.  For the last week the Charleston Courier has had very little news in it.  I expected to see an account of the death of the Rowan men, your mentioned in your letter, in the Courier of last date, but the my surprise I saw not one item concerning it.  I saw a statement that several North Carolinians were so severly wounded by shells that they were not expected to sur-vive, but whether this was in reference to the Rowan men, I am in perfect ignorance, as no names were given; however as it was on Sul-livans island that they were wounded, and as the eighth regiment has been stationed there (If I am not mistaken) some some time past, the reference may have been  an allusion to them (Rowan men); I suppose I will learn more about the affair in the next Charleston paper.  You mentioned in your last that Father had remarked, that I paid the highest price for board and that if I would put myself to a little trouble I could procure it cheaper.  Father was only true in part; I do pay the highest price for board (the same they charge at the hotel) but if I left Burnetts where could I go? to Miss Nancy’s? she is full the overflow-ing and charges seventy five dollars per month for fare, about which her boarders never pretend to bragg, nay more they all admit that it is nothing extra.  To Miss Thompson’s? She also is full, so that you see if I left Burnett’s there would be no other place for me to go.  Burnett had agreed to furnish board to this boarders for eighty dollars during the session whereas Miss Nancy speaks of going up to eighty next month with a perfect liberty if she chooses to go even beyond that the month after. I don’t suppose there is any doubt now, that I will have to go to the war next winter.  How would father like to have me go into the “signal corps”; the duties are easy and besides I would not be liable to go on long forced marches, which I don’t believe I could stand.  A young man here by the name of Kenan (son of the Congressman) seems to think that I could get in at Wilmington; I sup-pose father is acquainted with some prominent men in that town who would endeavor to get me in.

If father prefers my going into that “corps” to being private in the army, I hope he will endeavor to get me a place.  Everybody in it are gen-tlemen, I understand, which is the main reason why I desire to enter it.  It will be attended with a little expense, it is true, but I flatter myself not half as much as going to college.  I will have to furnish my own spyglass (which will cost from one hundred to $300)

Love to cousin Eliza, if she still remains with you.

More about this item:  The Kenan referred to in this letter is likely William Rand Kenan (1845-1903), who later became a prominent citizen of Wilmington, N.C., and a trustee of the University of North Carolina.