24 September 1863: “Truly the ways of providence are strange. But we have been taught that they are right.” 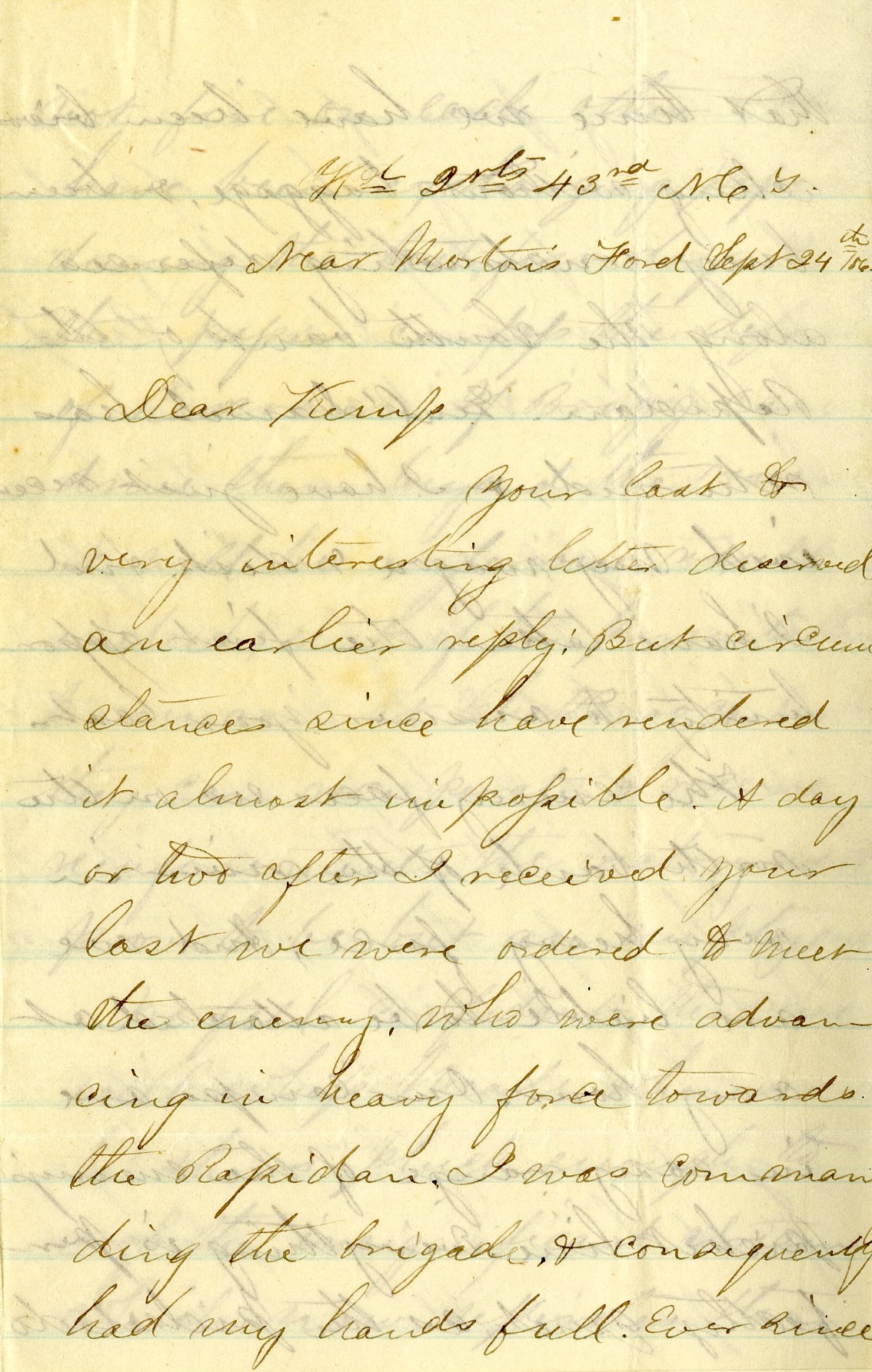 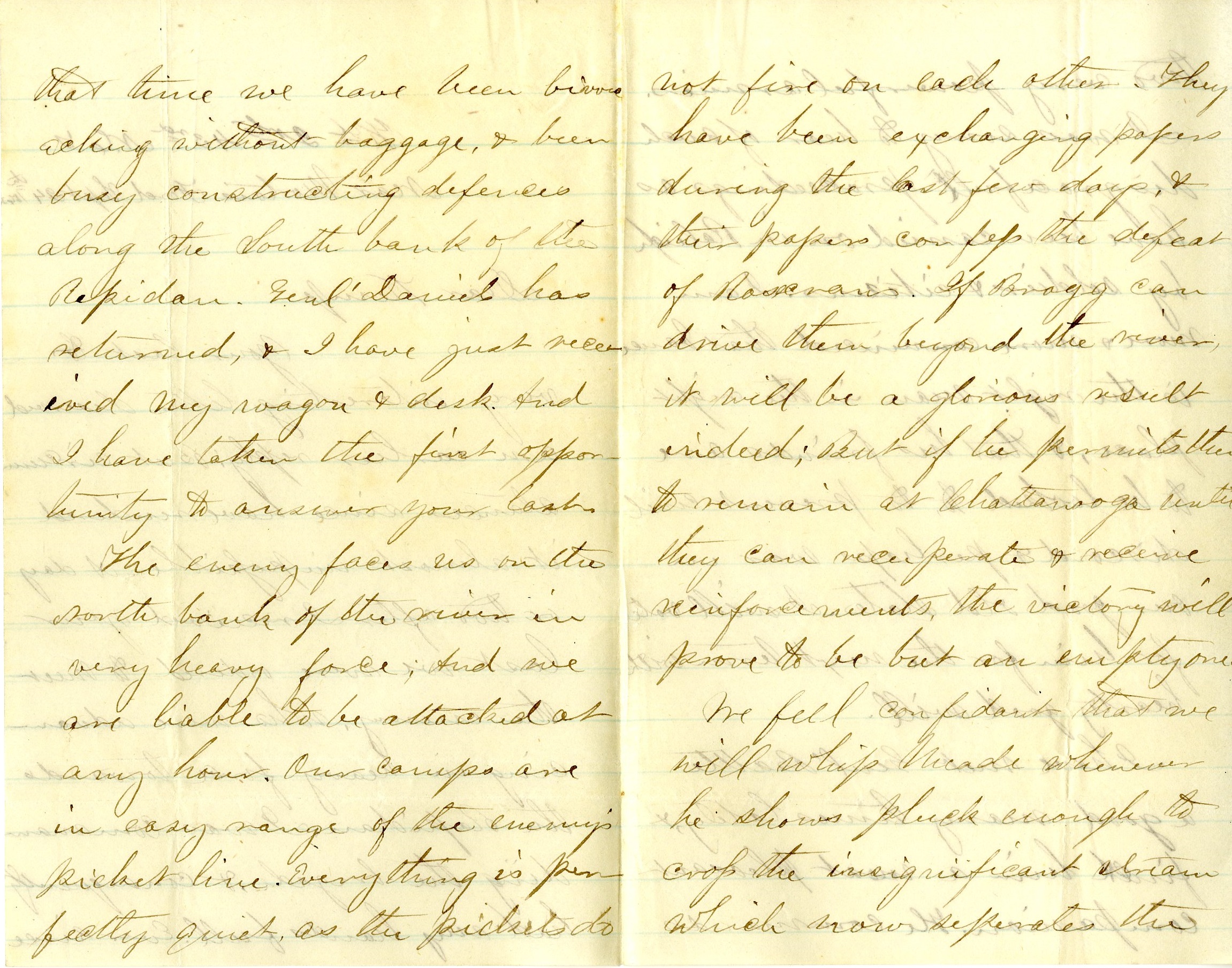 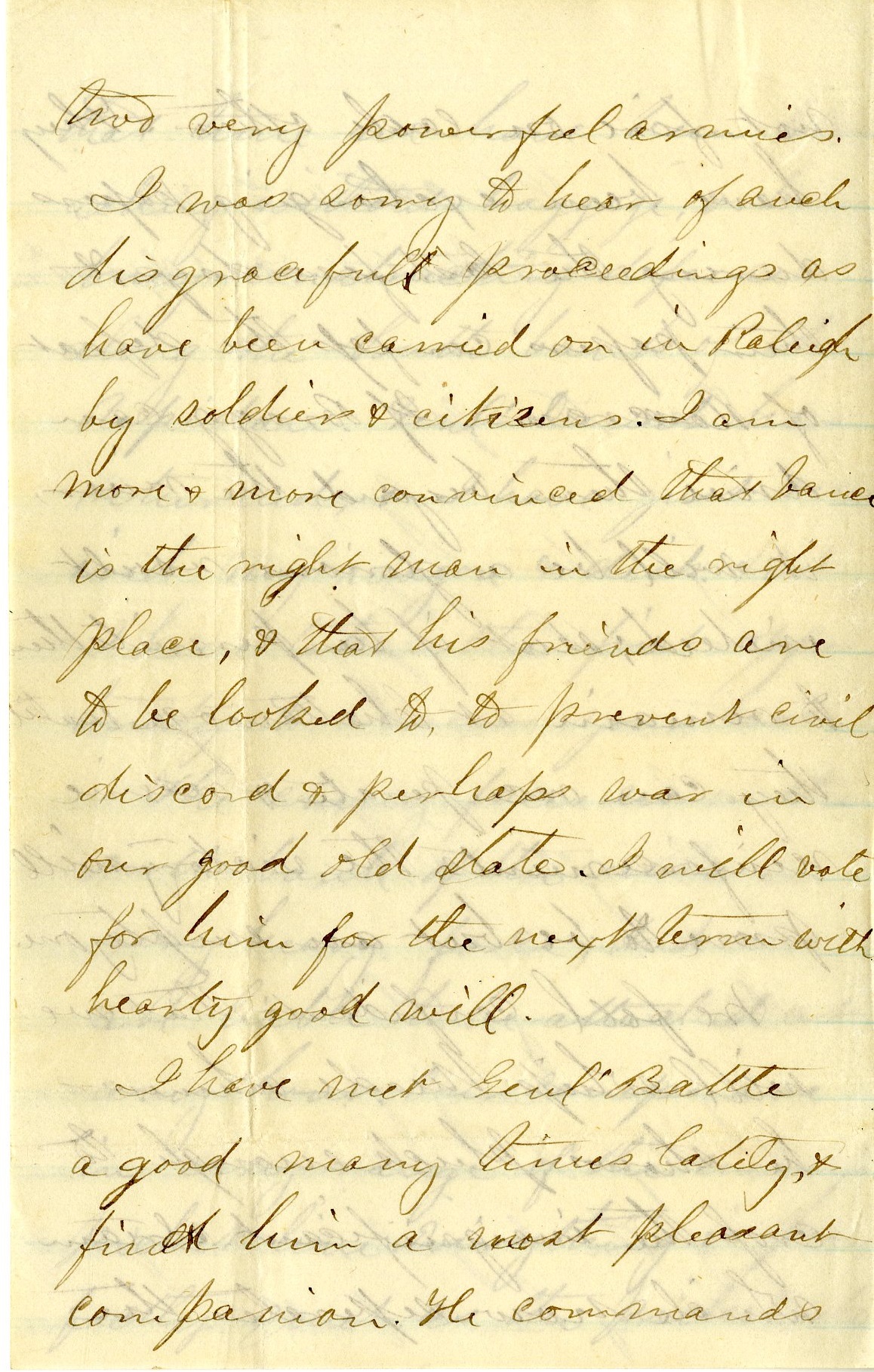 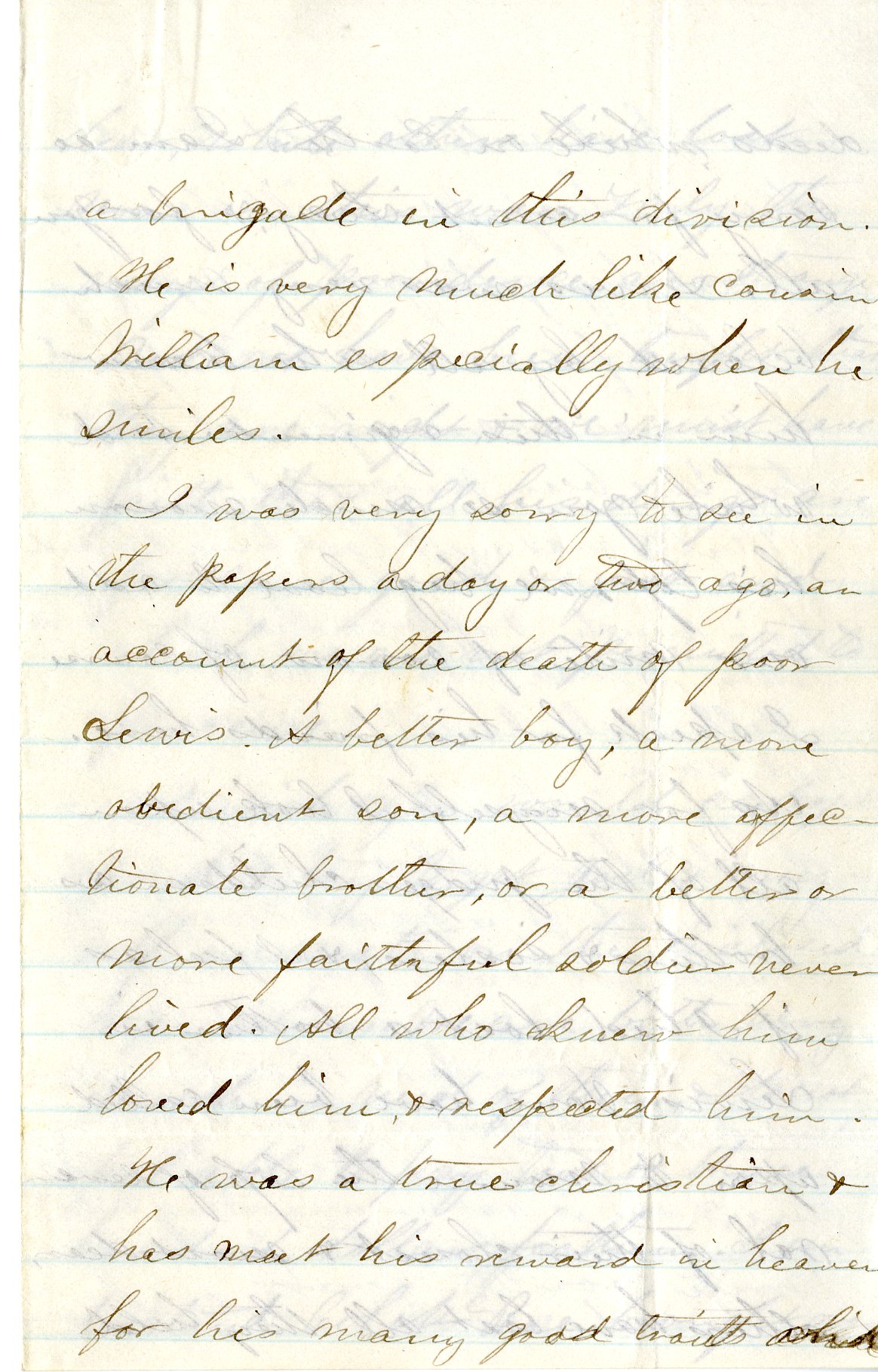 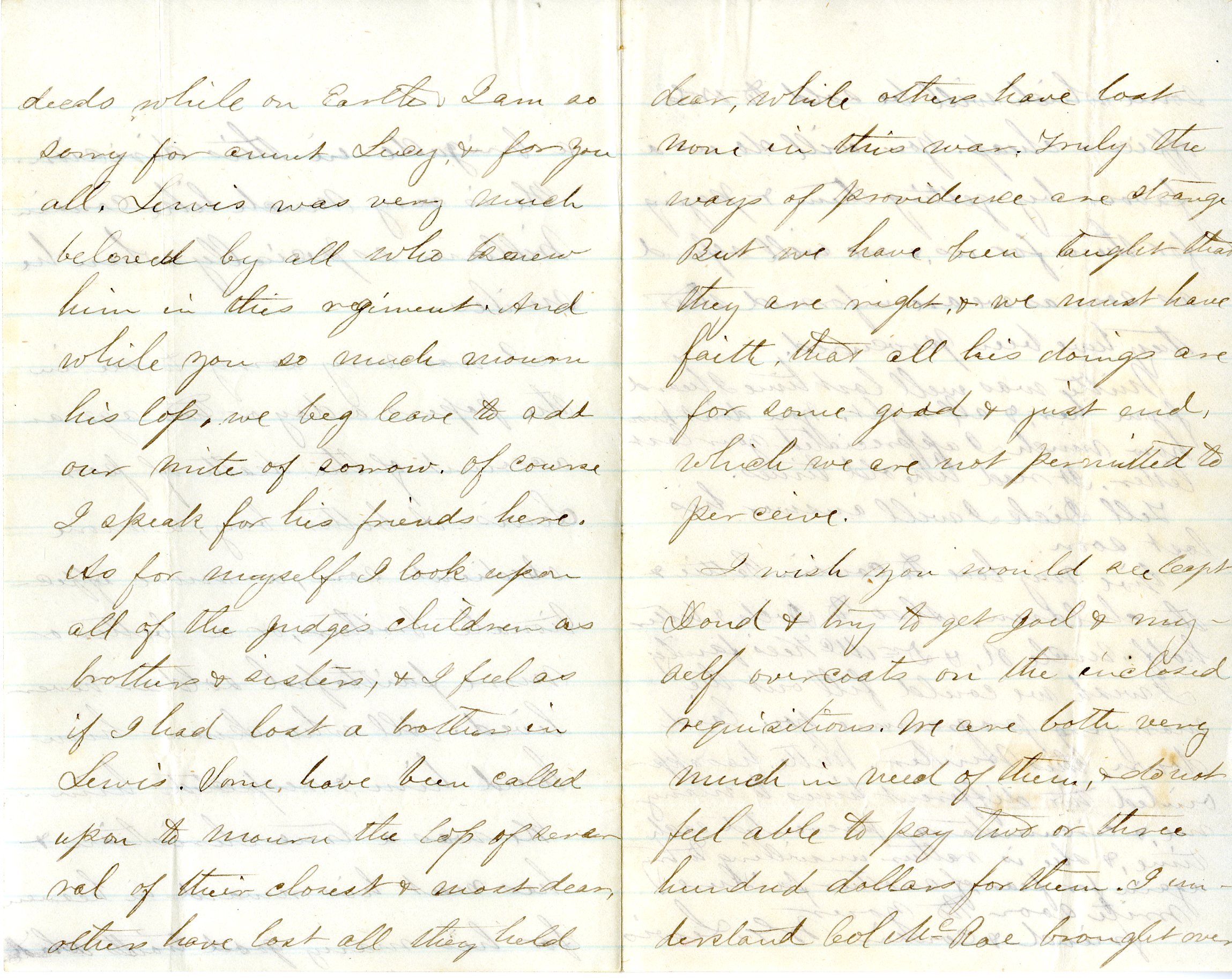 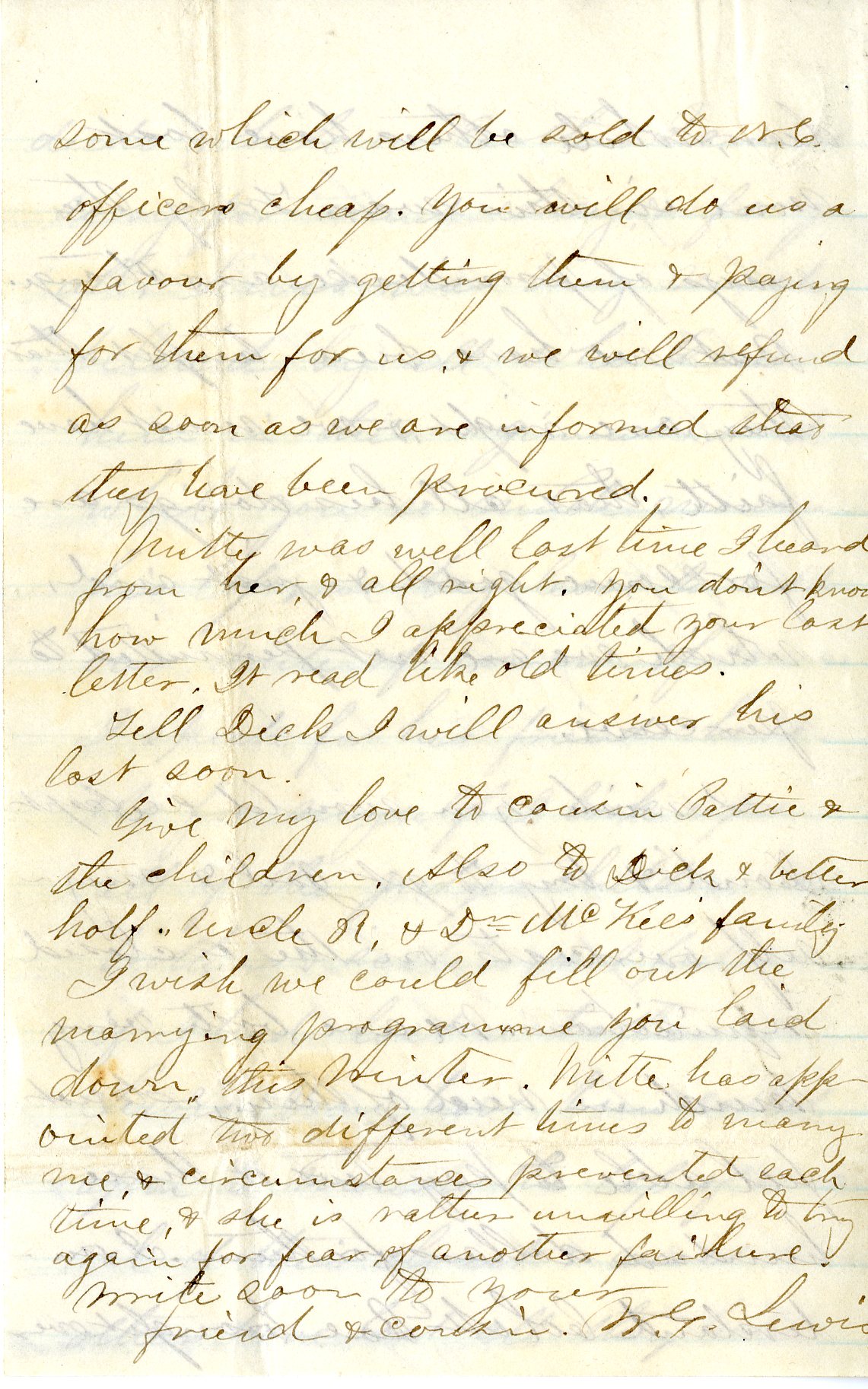 Your last & very interesting letter deserved an earlier reply: But circumstances since have rendered it almost impossible. A day or two after I received your last we were ordered to meet the enemy, who were advancing in heavy force towards the Rapidan. I was commanding the brigade, & consequently had my hands full. Ever since that time we have been bivouacking without baggage, & been busy constructing defences along the South bank of the Rapidan. Genl’ Daniels has returned, & I have just received my wagon and desk. And I have taken the first opportunity to answer your last.

The enemy faces us on the North bank of the river in very heavy force; And we are liable to be attacked at any hour. Our camps are in easy range of the enemy’s picket line. Everything is perfectly quiet, as the pickets do not fire on each other. They have been exchanging papers during the last few days, & their papers confess the defeat of Rosecrans. If Bragg can drive them beyond the river, it will be a glorious result indeed; But if he permits them to remain at Chattanooga until they can recuperate & receive reinforcements, the victory will prove to be but an empty one.

We feel confidant that we will whip Meade whenever he shows pluck enough to cross the insignificant stream which now seperates the two very powerful armies. I was sorry to hear such disgraceful proceedings as have been carried on in Raleigh by soldiers & citizens. I am more & more convinced that Vance is the right man in the right place, & that his friends are to be look to, to prevent civil discord & perhaps war in our good old state. I will vote for him for the next term with hearty good will.

I have met Genl’ Battle a good many times lately, & find him a most pleasant companion. He commands a brigade in this division. He is very much like cousin William especially when he smiles.

I was very sorry to see in the papers a day or two ago, an account of the death of poor Lewis. A better boy, a more obedient son, a more affectionate brother, or a better or more faithful soldier never lived. All who knew him loved him  respected him. He was a true christian & has met his reward in heaven for his many good traits and deeds while on Earth. I am so sorry for aunt Lucy, & for you all. Lewis was very much beloved by all who knew him in this regiment. And while you so much mourn his loss, we beg leave to add our mite of sorrow. Of course I speak for his friends here. As for myself I look upon all of the judge’s children as brothers & sisters, & I feel as if I had lost a brother in Lewis. Some have been called upon to mourn the loss of several of their closes & most dear, others have lost all they held dear, while others have lost none in this war. Truly the ways of providence are strange. But we have been taught that they are right. We must have faith, that all his doings are for some good & just end, which we are not permitted to perceive.

I wish you would see Capt Doud & try to get Joel & myself overcoats on the enclosed requisitions. We are both very much in need of them, & do not feel able to pay two or three hundred dollars for them. I understand Col McRae brought over some which will be sold to N.C. officers cheap. You will do us a favour by getting them & paying for them for us, & we will refund as soon as we are informed that they have been procured.

Milte was well last time I heard from her, & all right. You don’t know how much I appreciated your last letter. It read like old times.

Tell Dick I will answer his last soon.

Give my love to cousin Cattie & the children. Also to Dick & better half, Uncle R, & Dr McKee’s family. I wish we could fill out the marrying programme you laid down this winter. Milte has appointed two different times to mary me, & circumstances prevented each time, & she is rather unwilling to try again for fear of another failure. Write soon to your friend & Cousin.