20 October 1863: “a man in the next room has been bawling some information about a chicken that he got from Georgia that fought when ‘he cut off his wings and his spurs.'”

Item Description: Letter, 20 October 1863, from Phoebe Yates Pember to Louisa (Mrs. Jeremy Francis) Gilmer. Pember was a Confederate hospital nurse and writer from Georgia. During the Civil War, several of Pember’s letters to Gilmer were written from Chimborazo Hospital in Richmond, Va.; these letters mostly concern life in Richmond, including some descriptions of conditions at the hospital. 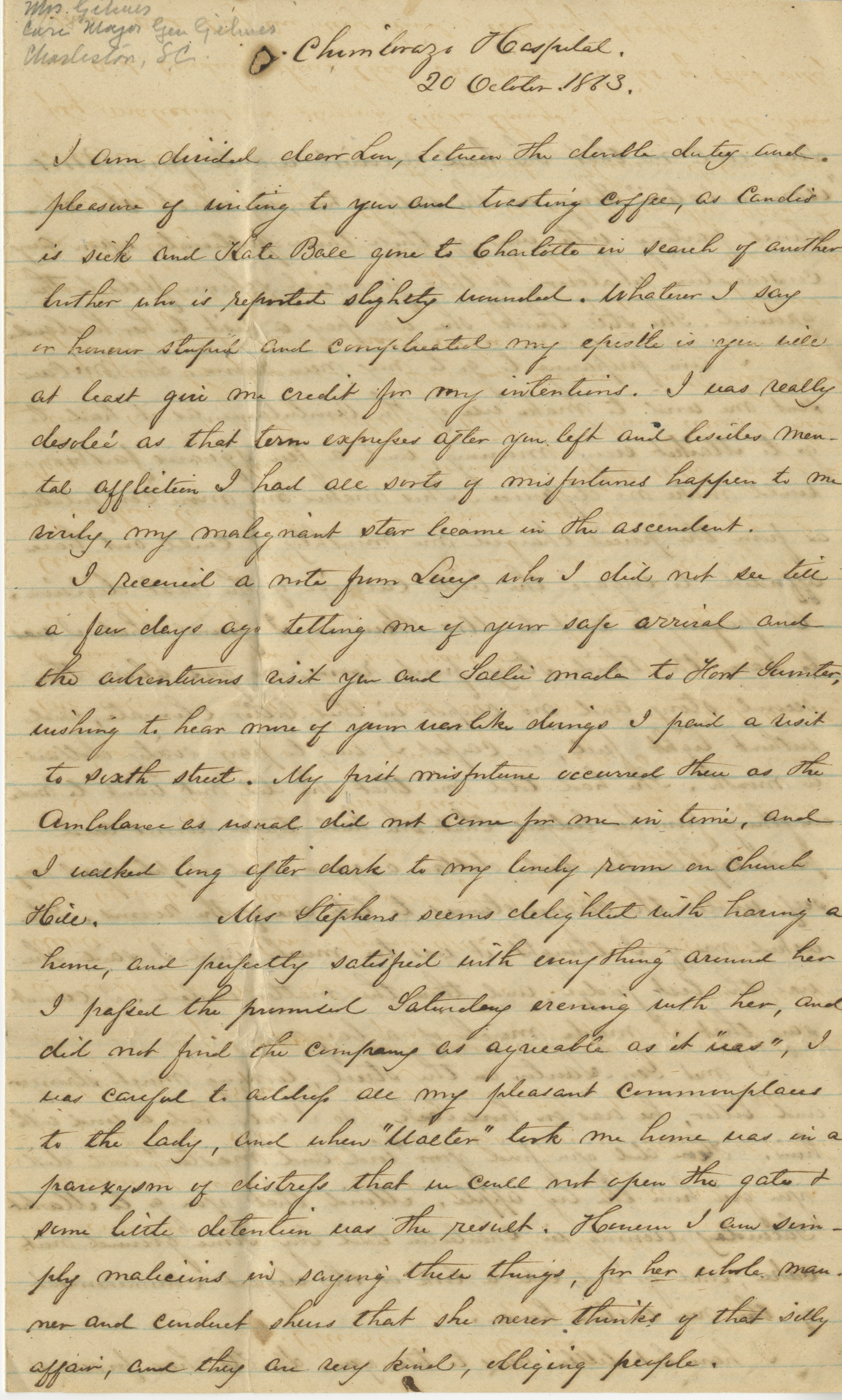 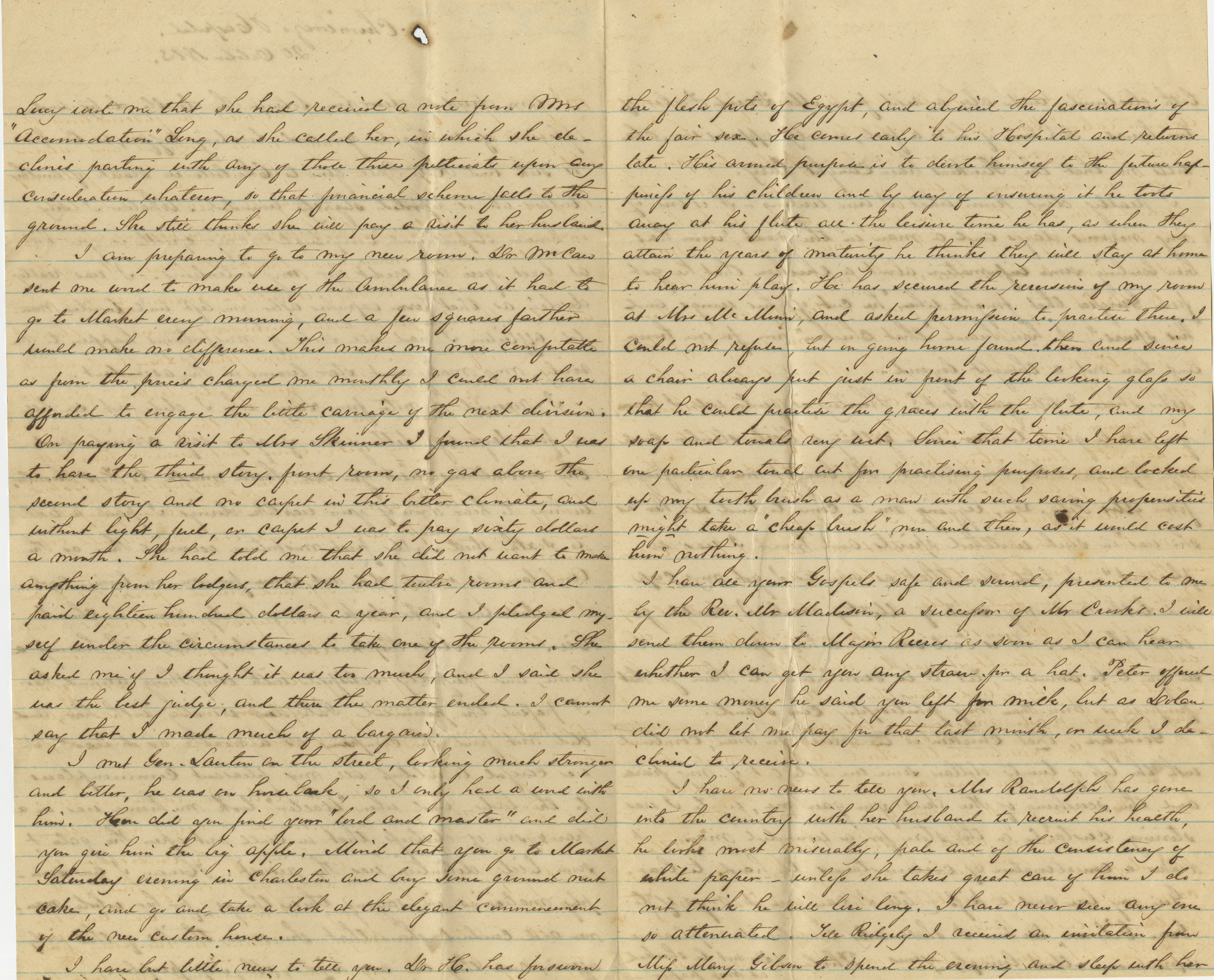 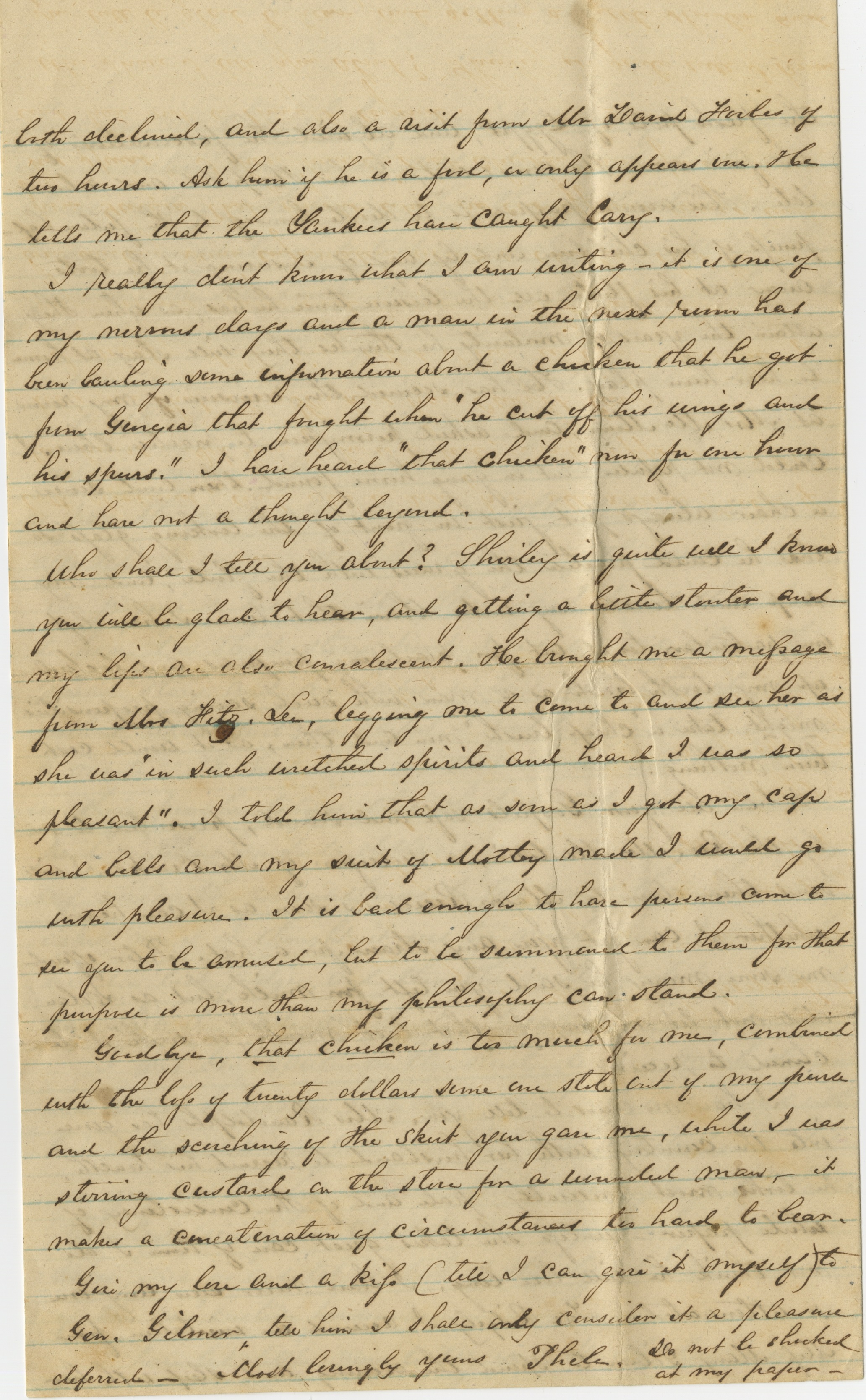 I am divided dear Len, between the double duty and pleasure of writing to you and [toasting?] coffee, as Candis is sick and Kate Bale gone to Charlotte in search of another brother who is reported slightly wounded. Whatever I say or however stupid and complicated my epistle is you will at least give me credit for my intentions.  I was really desoleé as that term expresses after you left and besides mental affliction I had all sorts of misfortunes happen to me [verily?], my malignant star became in the ascendent.

I received a note from Lucy who I did not see till a few days ago telling me of your safe arrival and the adventurous visit you and Sallie made to Fort Sumter, wishing to hear more of your warlike doings I paid a visit to sixth street. My first misfortune occurred there as the ambulance as usual did not come for me in time, and I walked long after dark to my lonely room on Church Hill. Mrs Stephens seems delighted with having a home, and perfectly satisfied with everything around her I passed the primmest Saturday evening with her, and did not find the company as agreeable as it “was”, I was careful to address all my pleasant commonplaces to the lady, and when “Master” took me home was in a paroxysm of distress that could not open the gate & some little detention was the result. However I am simply malicious in saying these things, for her whole manner and conduct shows that she never thinks of that silly affair, and they are very kind, obliging people.

Lucy wrote me that she had received a note from Mrs “Accomodation” Long, as she called her, in which she declines parting with any of those three petticoats upon any consideration whatever, so that financial scheme falls to the ground. She still thinks she will pay a visit to her husband.

I am preparing to go to my new room. Dr McCaw sent me word to make use of the ambulance as it had to go to Market every morning, and a few squares farther would make no difference. This makes me more comfortable as from the prices charged me monthly I could not have afforded to engage the little carriage of the next division. On paying a visit to Mrs Skinner I found that I was to have the third story front room, no gas above the second story and no carpet in this bitter climate, and without light, fuel, or carpet I was to pay sixty dollars a month. She had told me that she did not want to make anything from lodgers, that she had twelve rooms and paid eighteen hundred dollars a year, and I pledged myself under the circumstances to take one of the rooms. She asked me if I thought it was too much, and I said she was the best judge, and there the matter ended. I cannot say that I made much of a bargain.

I met Gen. Santon on the street, looking much stronger and better, he was on horseback; so I only had a word with him. How did you find your “lord and master” and did you give him the big apple. Mind that you go to Market Saturday evening in Charleston and buy some ground nut cake, and go and take a look at the elegant commencement of the new custom house.

I have but little news to tell you. Dr. H. has forsworn the flesh pots of Egypt, and abjured the fascinations of the fair sex. He comes early to his Hospital and returns late. His armed purpose is to devote himself to the future happiness of his children and by way of ensuring it he toots away at his flute all the leisure time he has, as when they attain the years of maturity he thinks they will stay at home to hear him play. He has secured the … of my room at Mrs Mc [Morris?], and asked permission to practise there. I could not refuse, but in going home found then and since a chair always put just in front of the looking glass so that he could practise the graces with the flute, and my soap and towals very wet. Since that time I have left one particular towal out for practising purposes, and locked up my tooth brush as a man with such saving propensities might take a “cheap brush” now and then, as it would cost him nothing.

I have all your Gospels safe and sound, presented to me by the Rev. Mr Madison, a successor of Mr Cooks. I will send them down to Major Reeves as soon as I can hear whether or not I can get you any straw for a hat. Peter offered me some money he said you left for milk, but as Dolan did not let me pay for that last month, or week I declined to receive.

I have no news to tell you. Mrs Randolph has gone into the country with her husband to recruit his health, he looks most miserably pale and of the consistency of white paper. Unless she takes great care of him I do not think he will live long. I have never seen any one so attenuated. Tell Ridgely I received an invitation from Miss Mary Gibson to spend the evening and sleep with her both declined, and also a visit from Mr David Forbes of two hours. Ask him if he is a fool, or only appears one. He tells me that the Yankees have caught Cary.

I really don’t know what I am writing. it is one of my nervous days and a man in the next room has been bawling some information about a chicken that he got from Georgia that fought when “he cut off his wings and his spurs.” I have heard “that chicken” man for one hour and have not a thought beyond.

Who shall I tell you about? Shirley is quite well I know you will be glad to hear, and getting a little stouter and my lips are also convalescent. He brought me a message from Mrs Fitz Lee begging me to come to and see her as she was “in such wretched spirits and heard I was so pleasant” I told him that as soon as I got my cap and bells and my suit of motley made I would go with pleasure. It is bad enough here to have persons come to see you to be amused, but to be summoned to them for that purpose is more than my philosophy can stand.

Goodbye, that chicken is too much for me, combined with the loss of twenty dollars some one stole out of my purse and the scorching of the skirt you gave me, while I was stirring custard on the stove for a wounded man, it makes a concatenation of circumstances too hard to bear. Give my love and kiss (till I can give it myself) to Gen. Gilmer, tell him I shall only consider it a pleasure deferred.

Do not be shocked at my paper

One Response to 20 October 1863: “a man in the next room has been bawling some information about a chicken that he got from Georgia that fought when ‘he cut off his wings and his spurs.'”