13 November 1863: “…The loss of Slaves, fencing, stock subsistence etc will prevent our doing much in the way of farming for several years…”

Item description: In this letter, 13 November 1863, William Lenoir in Atlanta, Ga.,  wrote to his cousin, Rufus Theodore Lenoir, in Fort Defiance, N.C., with an update on the family’s business interests that were at risk during anticipated Yankee occupation. He noted that most of the valuable male slaves had left already, though only a few months earlier in June none could be persuaded by the Yankees to leave. A couple of family members also had been taken prisoner by the Yankees, but ultimately released. 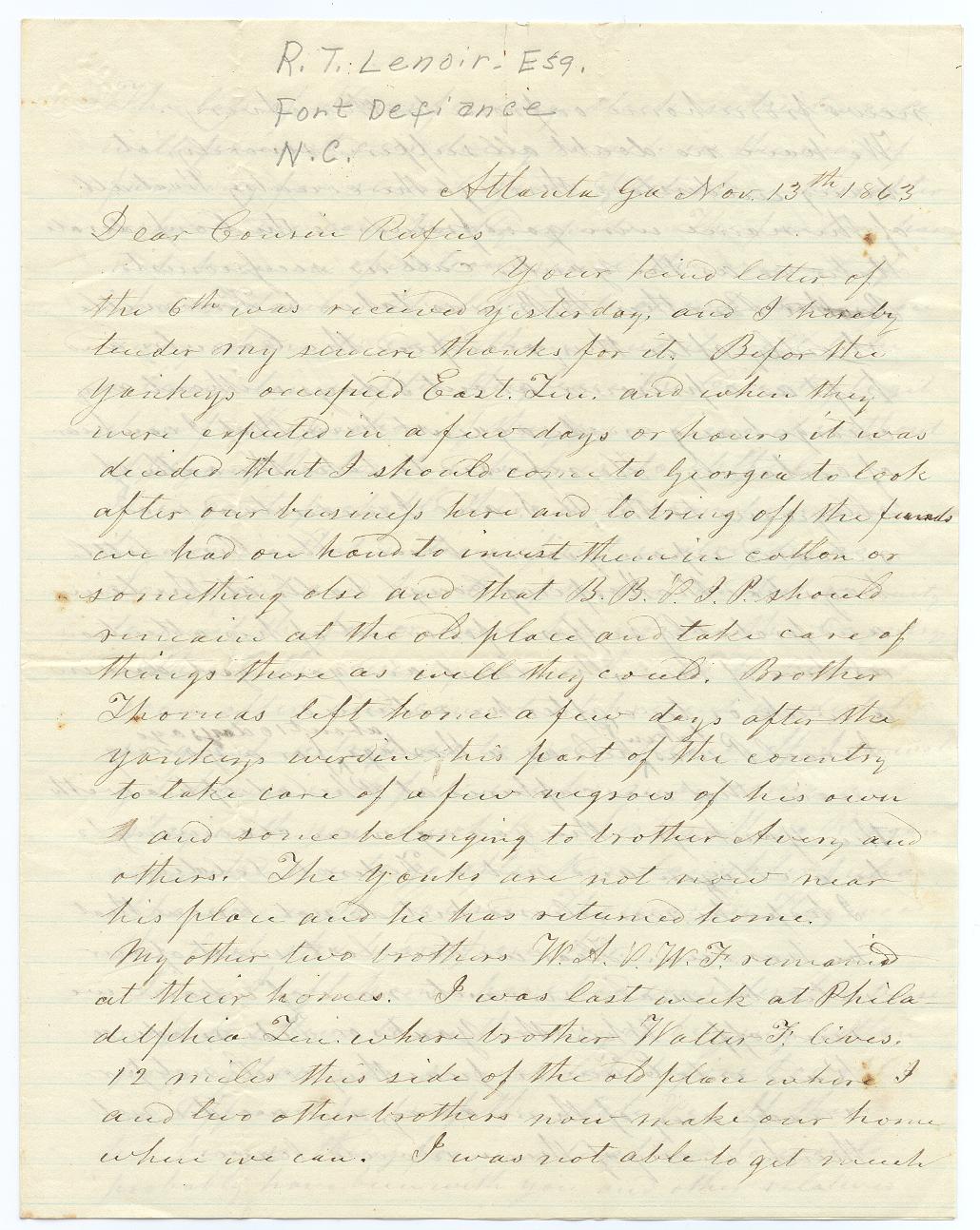 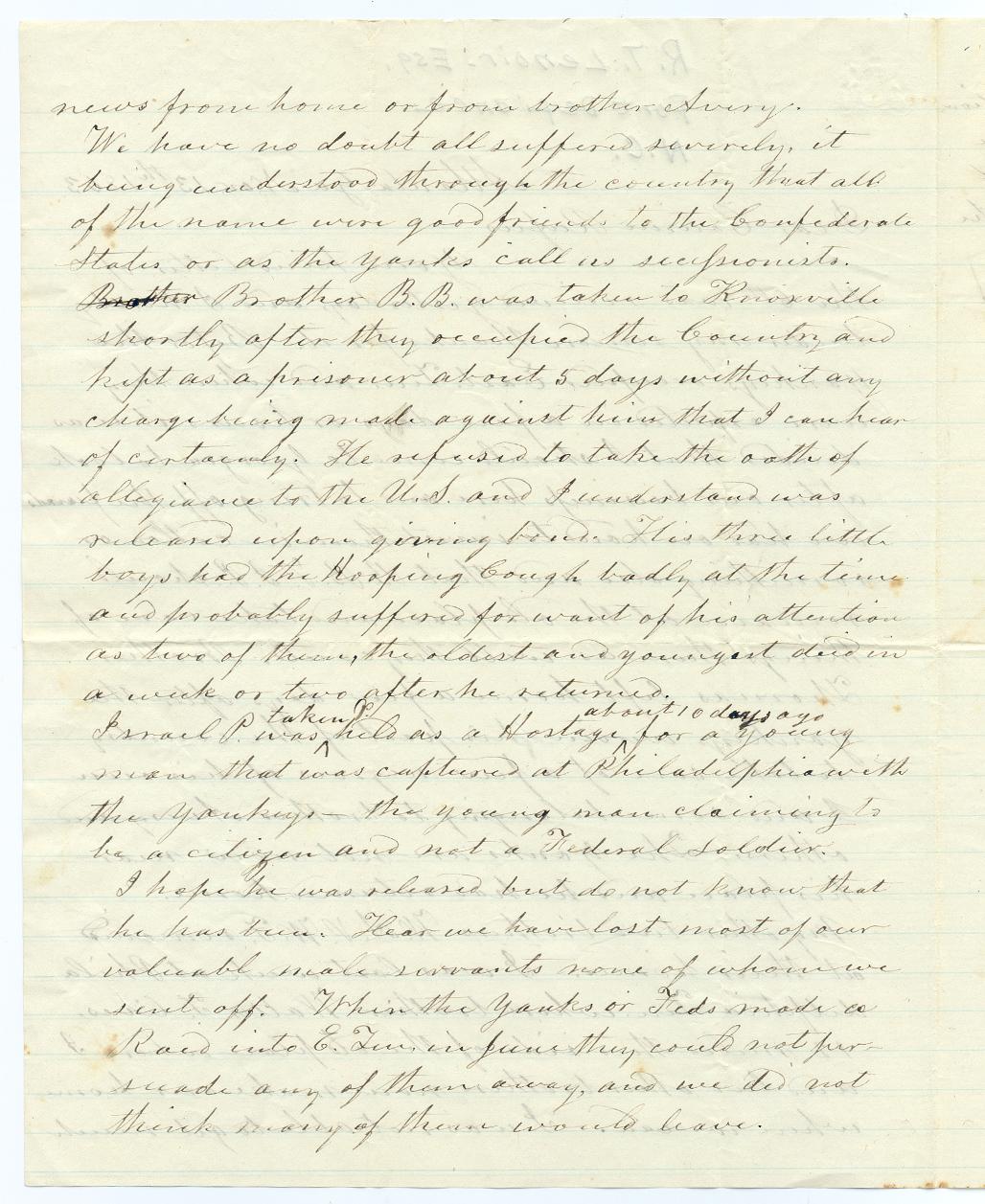 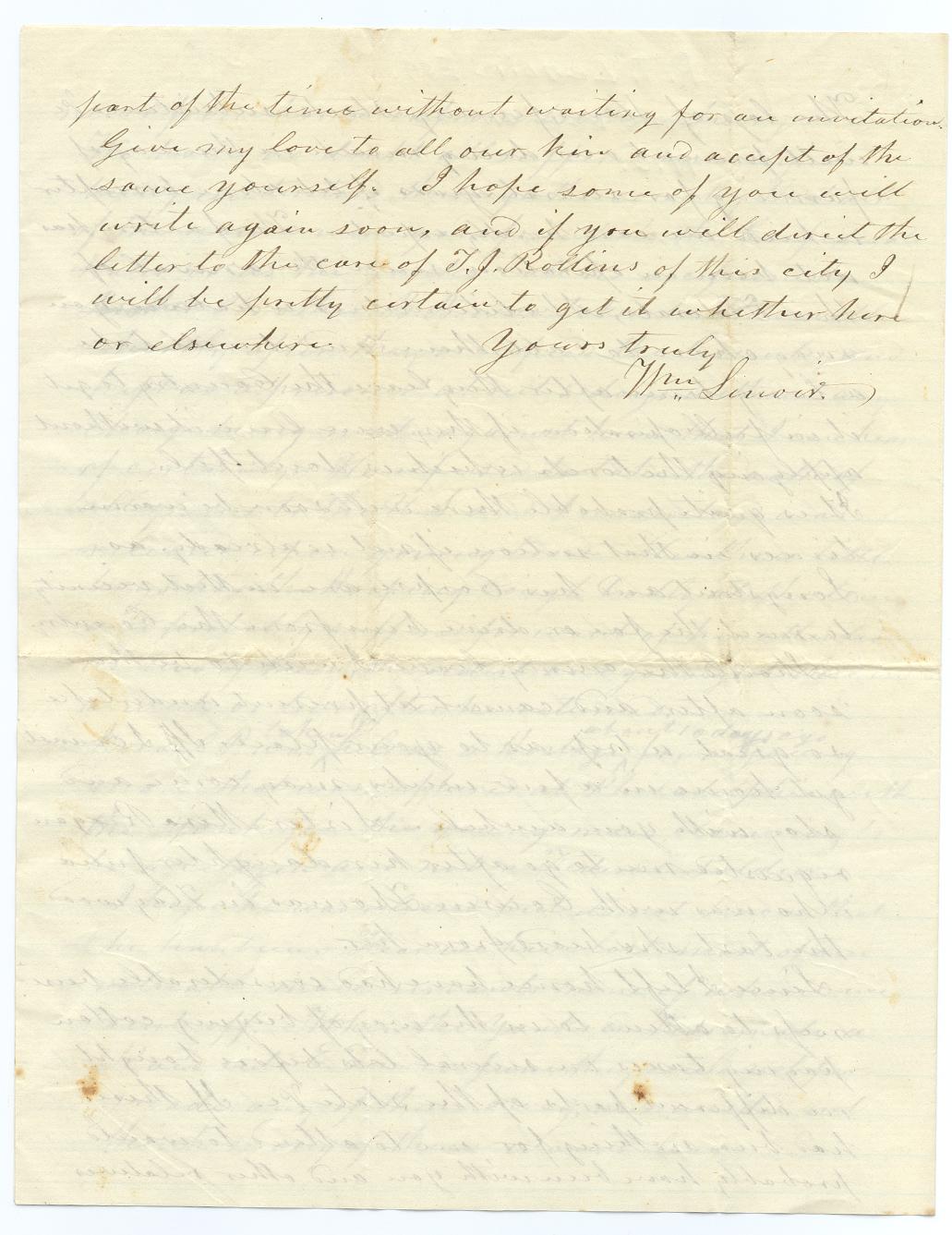 Your kind letter of the 6th was received yesterday, and I hereby tender my sincere thanks for it. Befor the Yankeys occupied East. Ten. and when they were expected in a few days or hours it was decided that I should come to Georgia to look after our business here and to bring off the funds we had on hand to invest them in cotton or something else and that B.B.P.I.P. should remain at the old place and take care of things there as well they could. Brother Thomas left home a few days after the Yankees were in his part of the country to take care of a few negroes of his own and some belonging to brother Avery and others. The Yanks are not now near his place and he has returned home.

My other two brothers W.A.P.W. F. remained at their homes. I was last week at Philadelphia Ten. where brother Walter F. lives. 12 miles this side of the old place where I and two other brothers now make our home when we can. I was not able to get much news from home or from brother Avery.

We have no doubt all suffered severely, it being understood through the country that all of the name were good friends to the Confederate States or as the Yanks call us secessionists. Brother B.B. was taken to Knoxville shortly after they occupied the Country and kept as prisoners about 5 days without any charge being made against him that I can hear of certainly. He refused to take the oath of allegiance to the U.S. and I understand was released upon giving bond. His three little boys had the Hooping Cough badly at the time and probably suffered for want of his attention as two of them, the oldest and youngest died in a week or two after he returned.

Israel P. was taken & held as a Hostage about 10 days ago for a young man that was captured at Philadelphia with the Yankeys – the young man claiming to be a citizen and not a Federal Soldier.

I hope he was released but do not know that he has been. Hear we have lost most of our valuable male servants none of whom we sent off. When the Yanks or Feds made a Raid into E. Ten. in June they could not persuade any of them away, and we did not think many of them would leave. The loss of Slaves, fencing, stock subsistence & c will prevent our doing much in the way of farming for several years if let alone hereafter which we can hardly expect. The factory has not been in operation since the arrival of the Federals, Abolitionists or whatever you may chose to call them, and it will take a long time after they leave the Country to get it in full operation if they even leave it without applying the torch which is doubtful.

It is quite probable there will soon be warm times in that section if not so already, as Longstreet and his Corpse are in that vicinity to meet the foe or drive him from the Country. Should the enemy leave I wish to be there soon after and cannot at present undertake so great a trip as to your place. If I cannot get home in a few weeks may come and stay with you awhile. Sister Mira Reagan requested me to go after her daughter Julia who was with Cousin Thomas in Haywood the last she heard from her.

Since I left home have had considerable business to attend to in the way of buying cotton paying taxes on several lots before bought in different parts of the state & c. If there had been nothing for me to attend to would probably have been with you and other relatives part of the time without waiting for an invitation.

Give my love to all our kin and accept of the same yourself. I hope some of you will write again soon, and if you will direct the letter to the care of T.J. Rollins of this city I will be pretty certain to get it whether here or elsewhere.