27 November 1863: “We have enough from the hire of hands to live comfortably upon & surely never did people meet kinder friends than we have done.”

Posted on 27 Nov ’13 by Biff Hollingsworth

Item description: Letter, dated 27 November 1863, from Frances Devereux Polk at Asheville, N.C., to Harriett [last name unknown], in which there is a description of family events of the previous year, including their removal to Asheville. 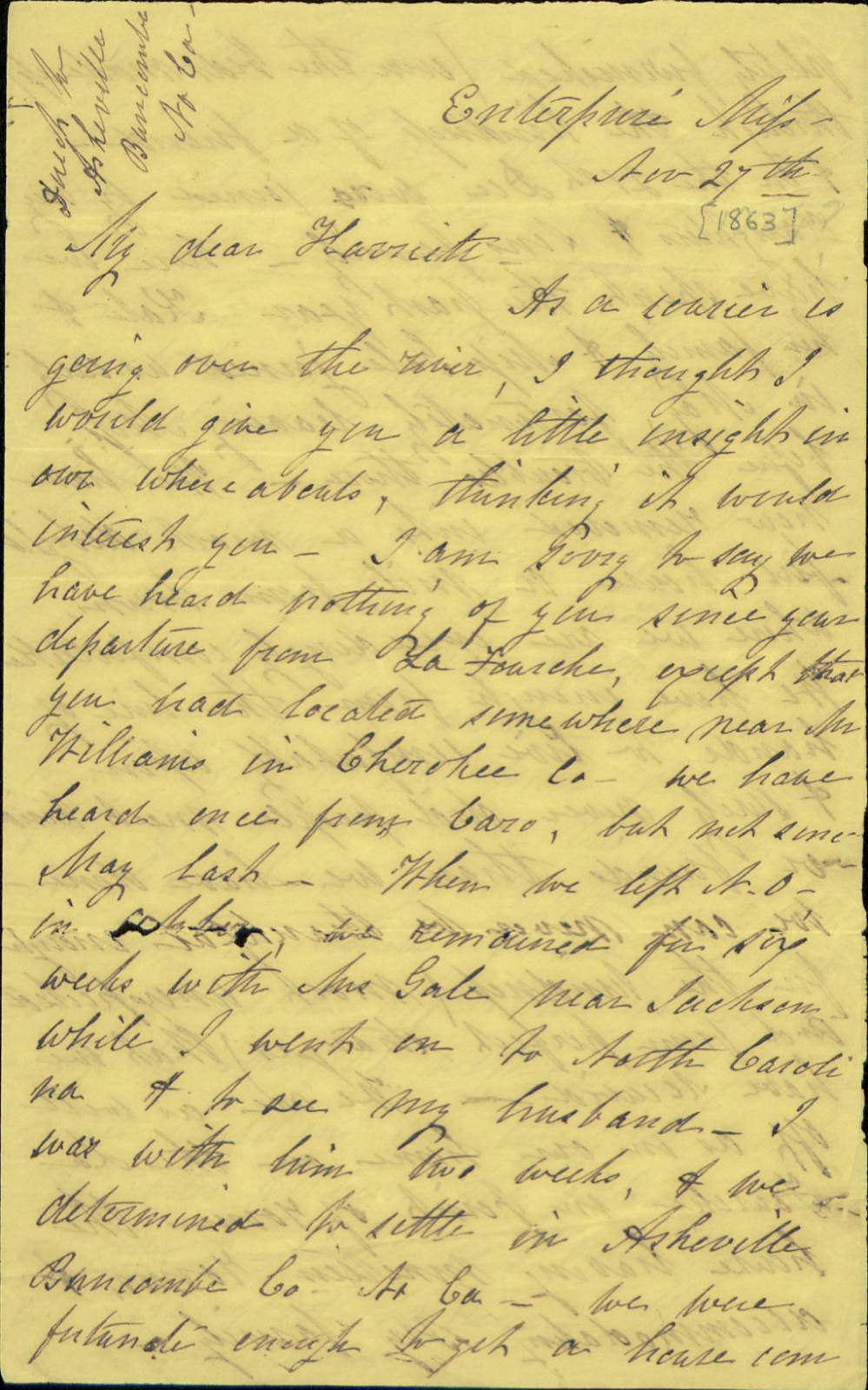 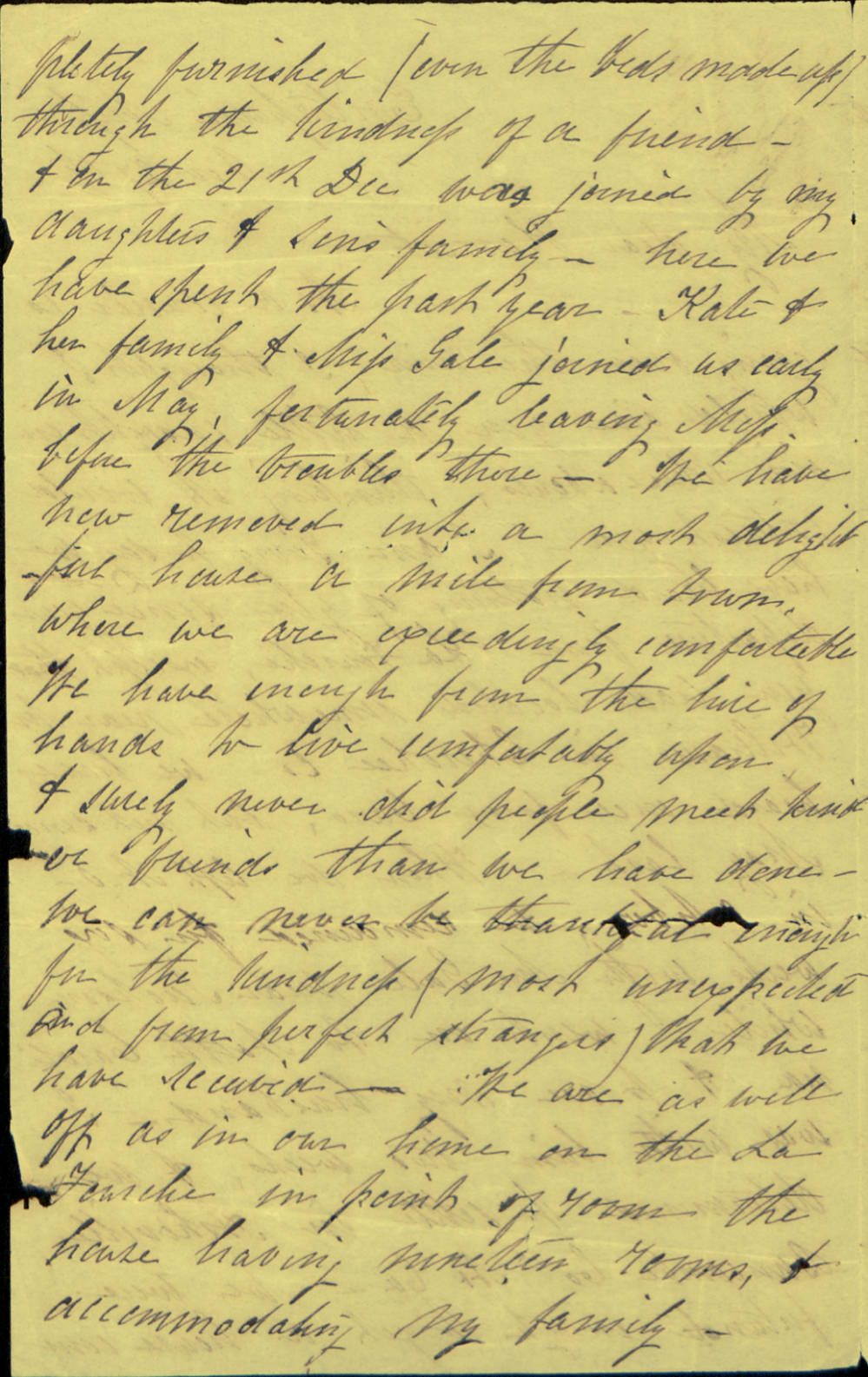 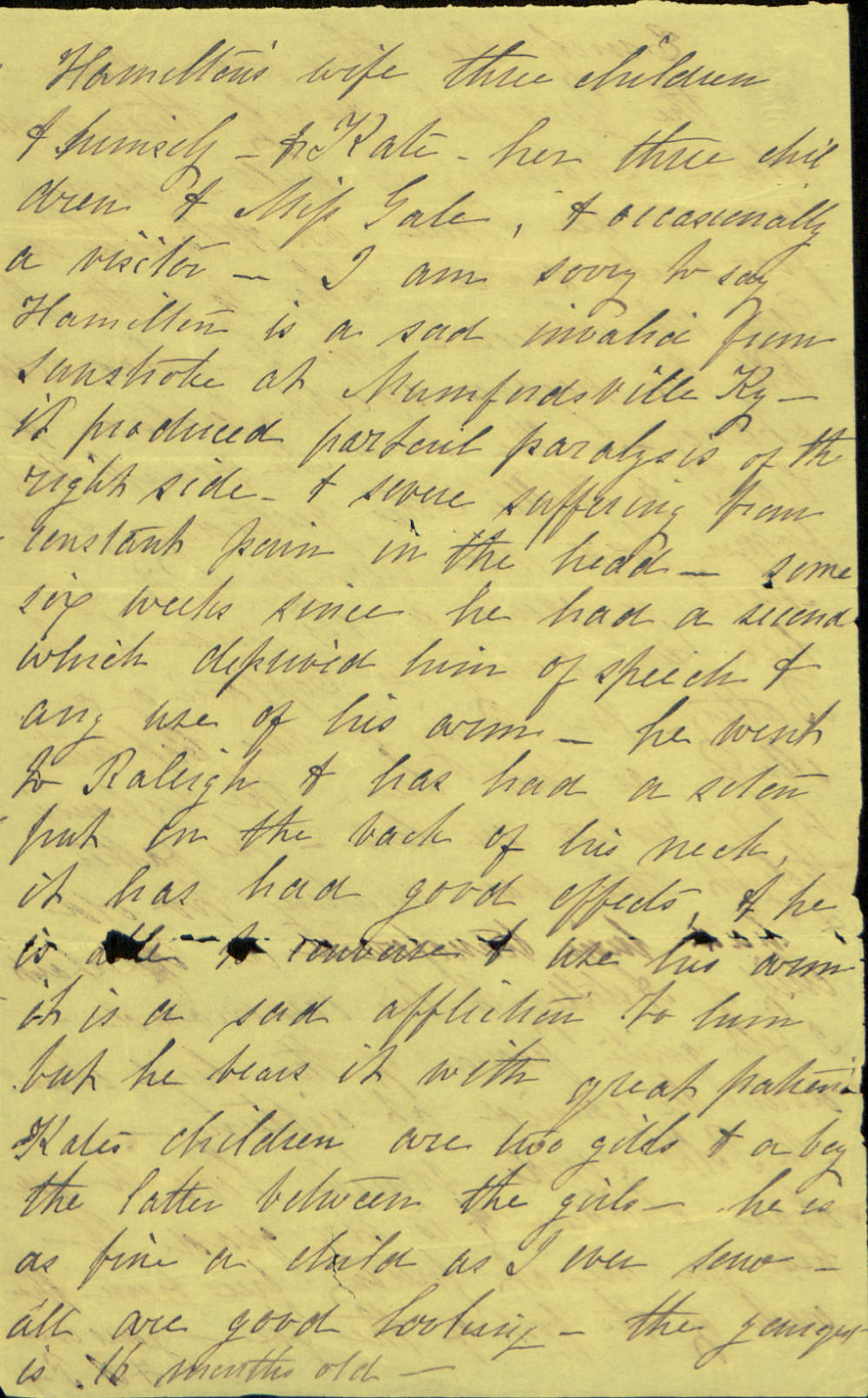 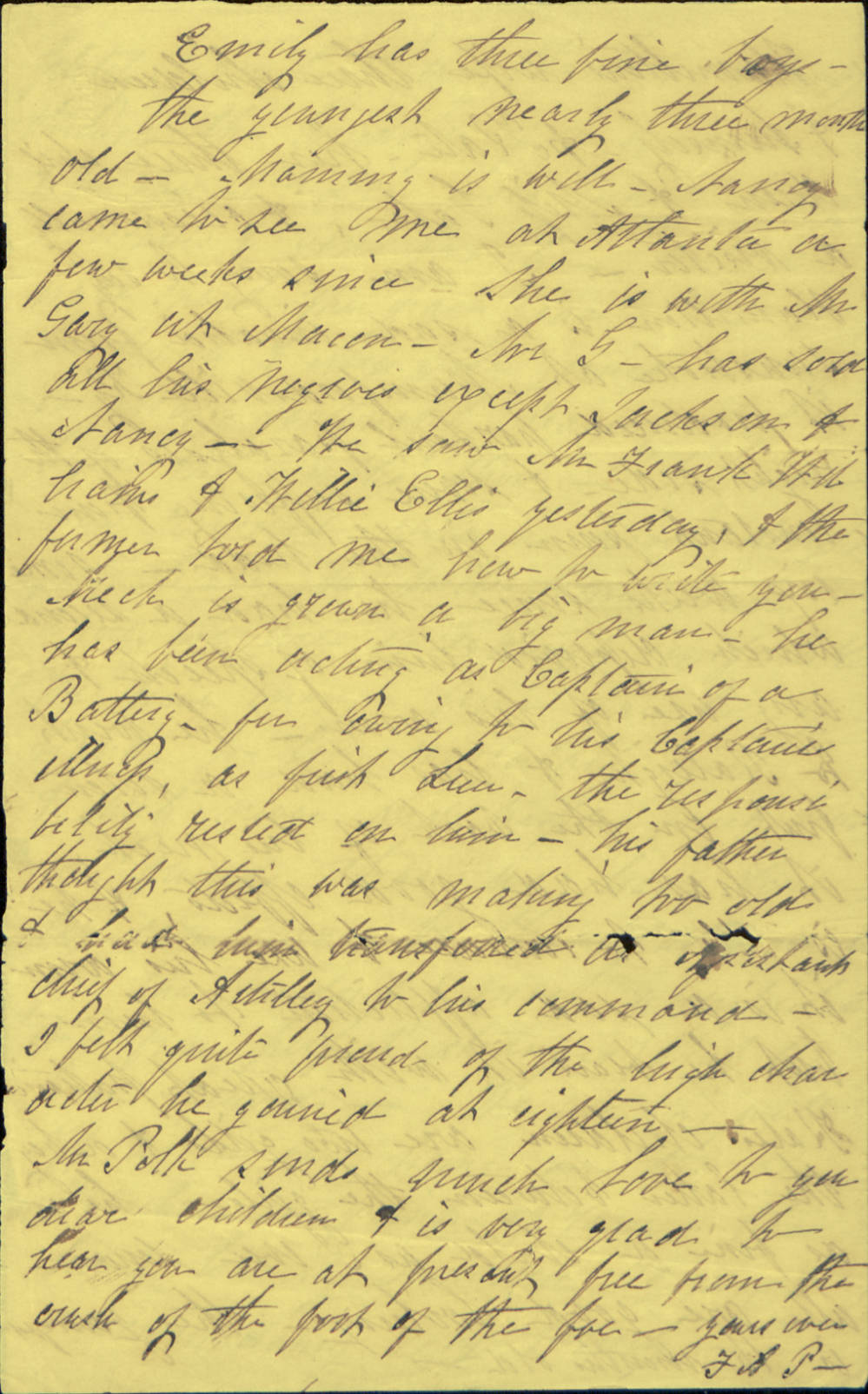 As a courier is going over the river, I thought I would give you a little insight in our whereabouts, thinking it would interest you. I am sorry to say we have heard nothing of you since your departure from La Fourche, except that you had located somewhere near Mr. Williams in Cherokee Co. We have heard once from Caro., but not since May last. When we left N.O. in [October?], we remained for six weeks with Mrs. Gale near Jackson while I went on to North Carolina & to see my husband. I was with him two weeks, & we determined to settle in Asheville Buncombe Co., No. Ca. We were fortunate enough to get a house completely furnished (even the beds made up) through the kindness of a friend. & on the 21st Dec. was joined by my daughters & sons family. Here we have spent the past year. Kate & her family & Miss Gale joined us early in May, fortunately leaving Miss. before the troubles there. We have now removed into a most delightful house a mile from town, where we are exceedingly comfortable. We have enough from the hire of hands to live comfortably upon & surely never did people meet kinder friends than we have done. We can never be thankful enough for the kindness (most unexpected and from perfect strangers) than we have received. We are as well off as in our home on the La Fourche. in point of room, the house having nineteen rooms, for accommodating my family.

Hamilton’s wife three children & himself – & Kate – her three children & Miss Gale, & occasionally a visitor. I am sorry to say Hamilton is a sad invalid from sunstroke at Mumfordsville Ky. It produced partial paralysis of the right side, & severe suffering from constant pain in the head. some six weeks since he had a second which deprived him of speech & any use of his arms. he went to Raleigh & has had a [?] put in the back of his neck, it has had good effects, & he is able to converse and use his arm. it is a sad affliction to bear but he bears it with great patience.

Kate’s children are two girls & a boy, the latter between the girls. he is as fine a child as I ever saw. all are good looking. the youngest is 16 months old.

Emily has three fine boys. the youngest nearly three months old. [Mammy?] is well. Nancy came to see me at Atlanta a few weeks since. She is with Mr. Gary at Macon. Mr. G has sold all his negroes except Jackson & Nancy. We sent Mr. Frank Williams & Willie Ellis yesterday, & the former told me how to write you. [Meck?] is grown a big man. he has been acting as Captain of a Battery, for owing to his Captain’s ailings, as first Lieu. the responsibility rested on him. his father thought this was making too old & had him transferred to [?] chief of Artillery to his command. I felt quite proud of the high character he gained at eighteen.

Mr. Polk sends much love to you dear children & is very glad to hear you are at present free from the crush of the foot of the foe.