15 January 1864: “Our best protections will be our poverty and bad roads…”

Posted on 15 Jan ’14 by Biff Hollingsworth

Item description: In this letter dated 15 January 1864, Walter Waightstill Lenoir (1823-1890) wrote from Crab Orchard in Watauga County, N.C., to his mother, Selina Louisa Avery Lenoir (1783-1864) in Fort Defiance, Caldwell County, N.C., about the weather and its impact on farming operations, his insufficient supplies for the winter, and his “negroes,” especially their work habits and the health of Maria, who may have had a prolapsed uterus following childbirth. He did not think the Yankees would take the trouble of raiding Crab Orchard that winter given the bad roads and impoverished conditions of the area. 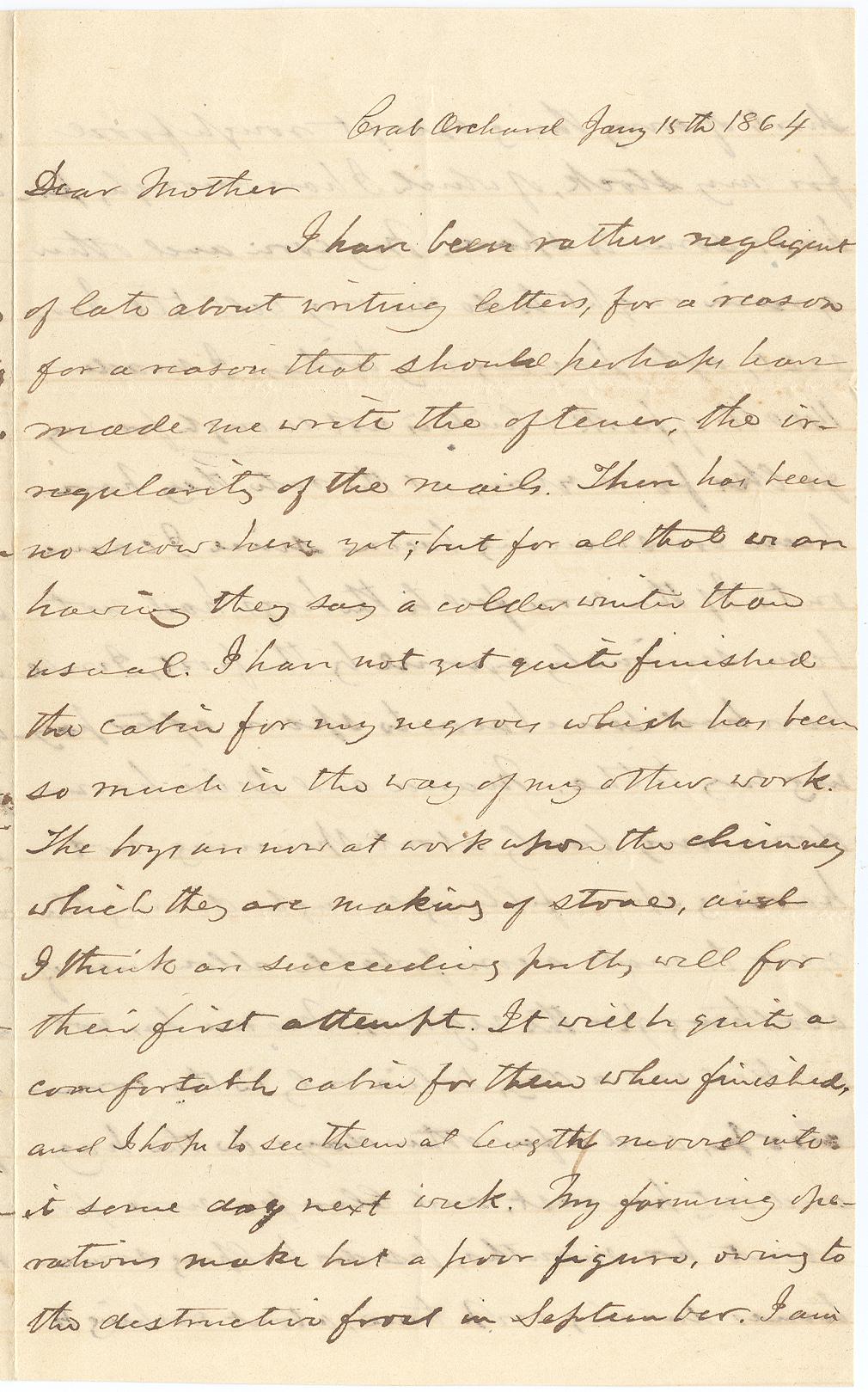 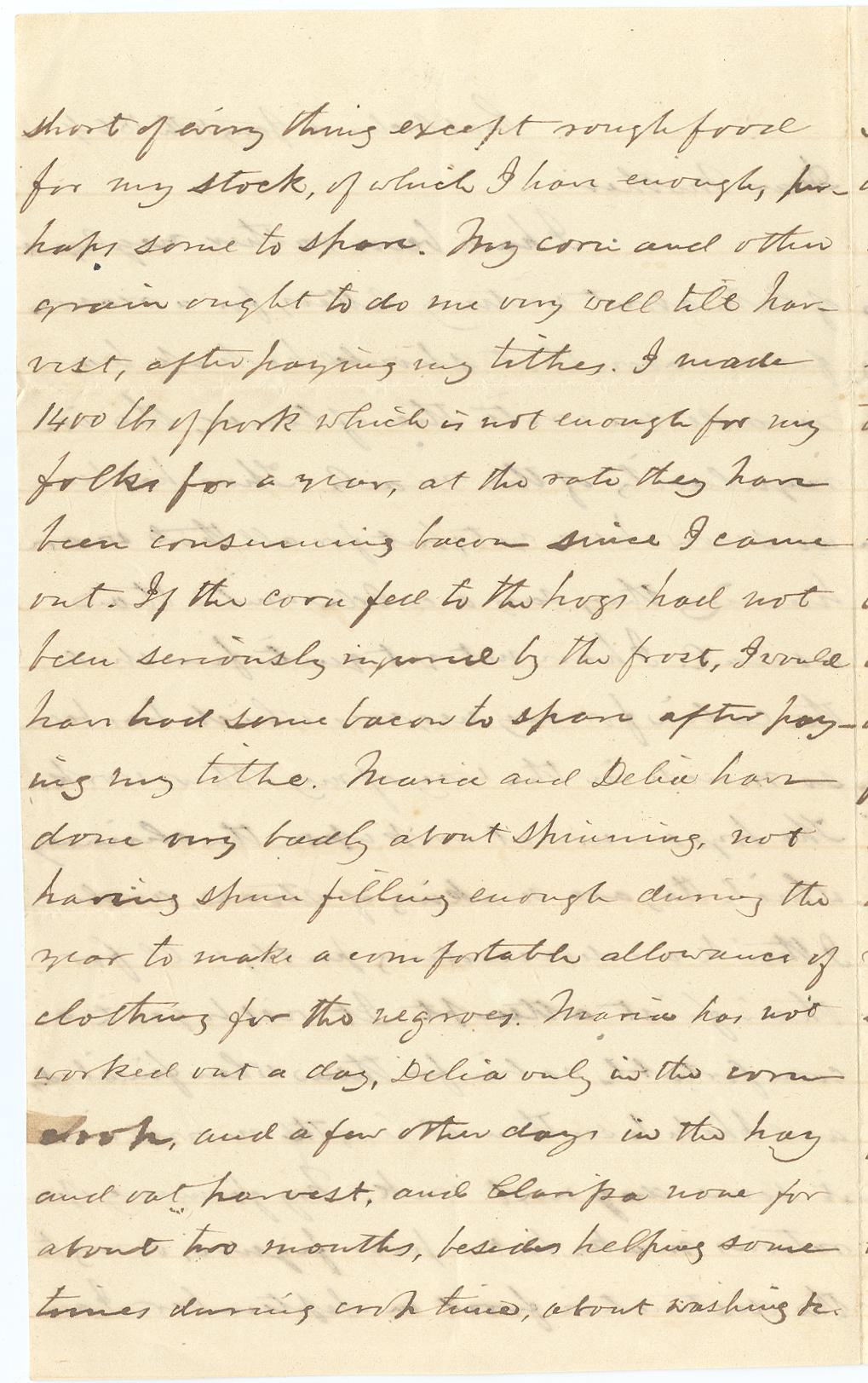 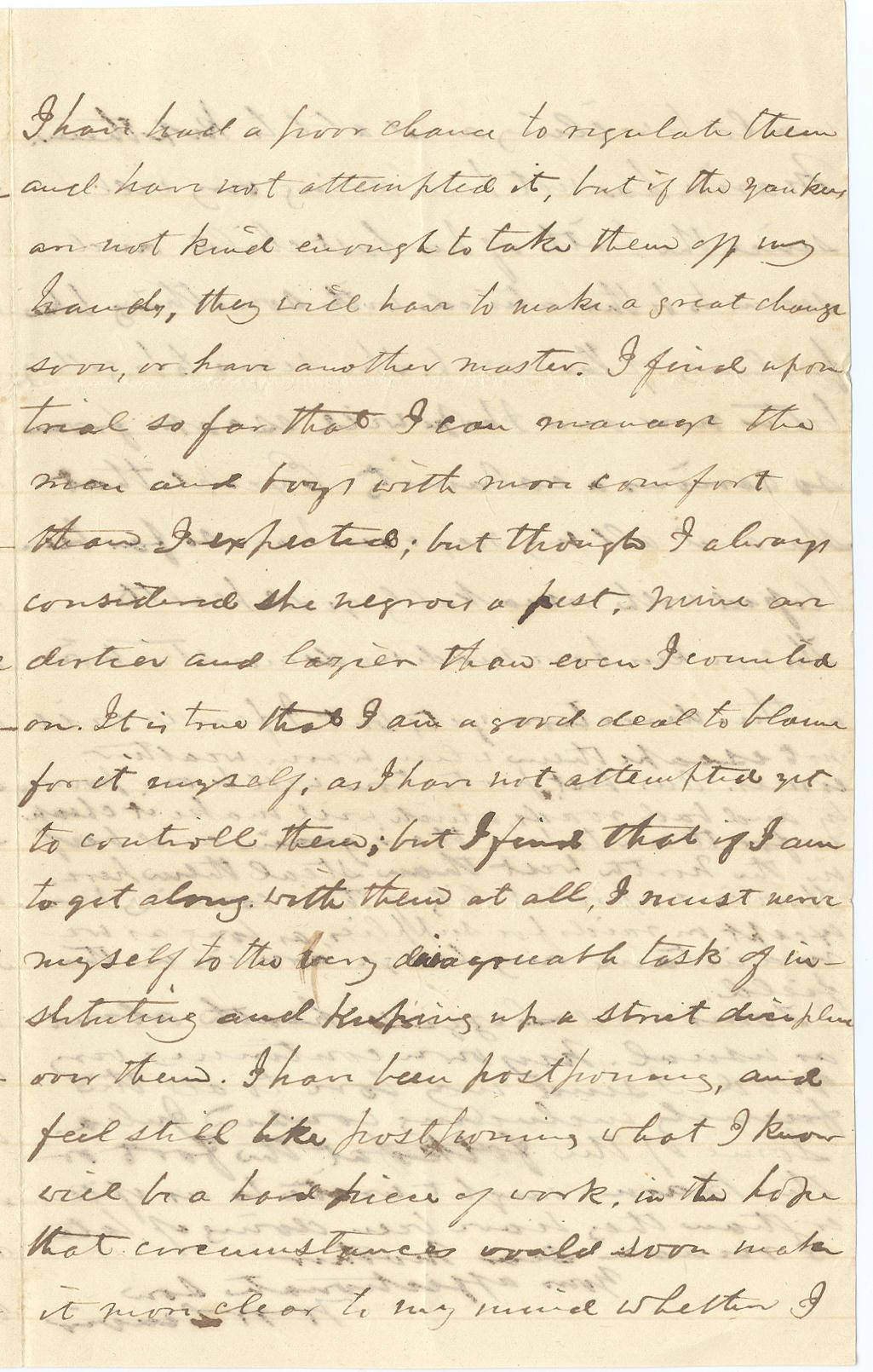 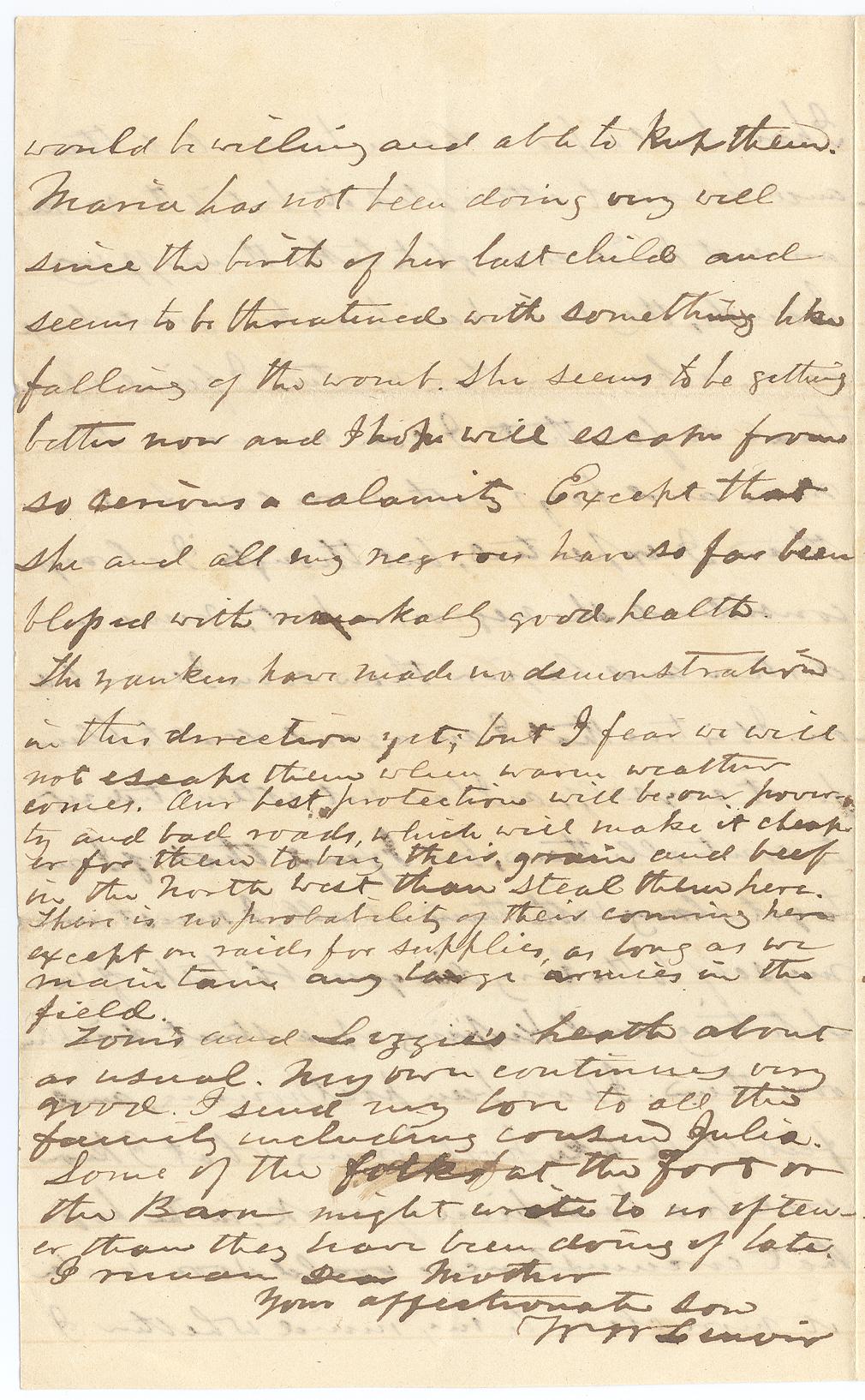 Item citation: from folder 154 in the Lenoir Family papers #426 in the Southern Historical Collection, Wilson Library, University of North Carolina at Chapel Hill.

I have been rather negligent of late about writing letters, for a reason for a reason that should perhaps have made me write the oftener, the irregularity of the mails. There has been no snow here yet; but for all that we are having they say a colder winter than usual. I have not yet quite finished the cabin for my negroes which has been so much in the way of my other work. The boys are now at work upon the chimney which they are making of stone, and I think are succeeding pretty well for their first attempt. It will be quite a comfortable cabin for them when finished, and I hope to see them at length moved into it some day next week. My farming operatives make but a poor figure, owing to the destructive frost in September. I am short of every thing except rough food for my stock, of which I have enough, perhaps some to spare. My corn and other grain ought to do me very well till harvest, after paying my tithes. I made 1400 lbs of pork which is not enough for my folks for a year, at the rate they have been consuming bacon since I came out. If the corn fed to the hogs had not been seriously impaired by the frost, I would have had some bacon to spare after paying my tithe. Maria and Delia have done very badly about spinning, not having spun filling enough during the year to make comfortable allowances for clothing for the negroes. Maria has not worked out a day, Delia only in the corn crop, and a few other days in the hay and oat harvest, and Clarissa none for about two months, besides helping some times during crop time, about washing etc.

I have had a poor chance to regulate them and have not attempted it, but if the Yankees are not kind enough to take them off my hands, they will have to make a great change soon, or have another master. I find upon trial so far that I can manage the man and boys with more comfort than I expected; but though I always considered the negroes a pest, mine are dirtier and lazier than even I counted on. It is true that I am a good deal to blame for it myself, as I have not attempted yet to control them; but I find that if I am to get along with them at all, I must nerve myself to the very disagreeable task of instituting and keeping up strict discipline over them. I have been postponing, and feel still like postponing what I know will be a hard piece of work, in the hope that circumstances would soon make it more clear to my mind whether I would be willing and able to keep them. Maria has not been doing very well since the birth of her last child and seems to be threatened with something like falling of the womb. She seems to be getting better now and I hope will escape from so serious a calamity  Except that she and all my negroes have so far been blessed with remarkably good health.

The Yankees have made no demonstration in this direction yet; but I fear we will not escape them when warm weather comes. Our best protections will be our poverty and bad roads, which will make it cheaper for them to buy their grain and beef in the North West than steal them here. There is no probability of their coming here except on raids for supplies, as long as we maintain any large armies in the field.

Tom’s and Lizzie’s heath about as usual. My own continues very good. I send my love to all the family including cousin Julia. Some of the folks at the fort or the Barn might write to us oftener than they have been doing of late.