3 March 1864: “father’s message to you is that he intends running you as candidate for baliff they tell him if you are elected you can get to come & stay at home…”

Posted on 3 Mar ’14 by Biff Hollingsworth 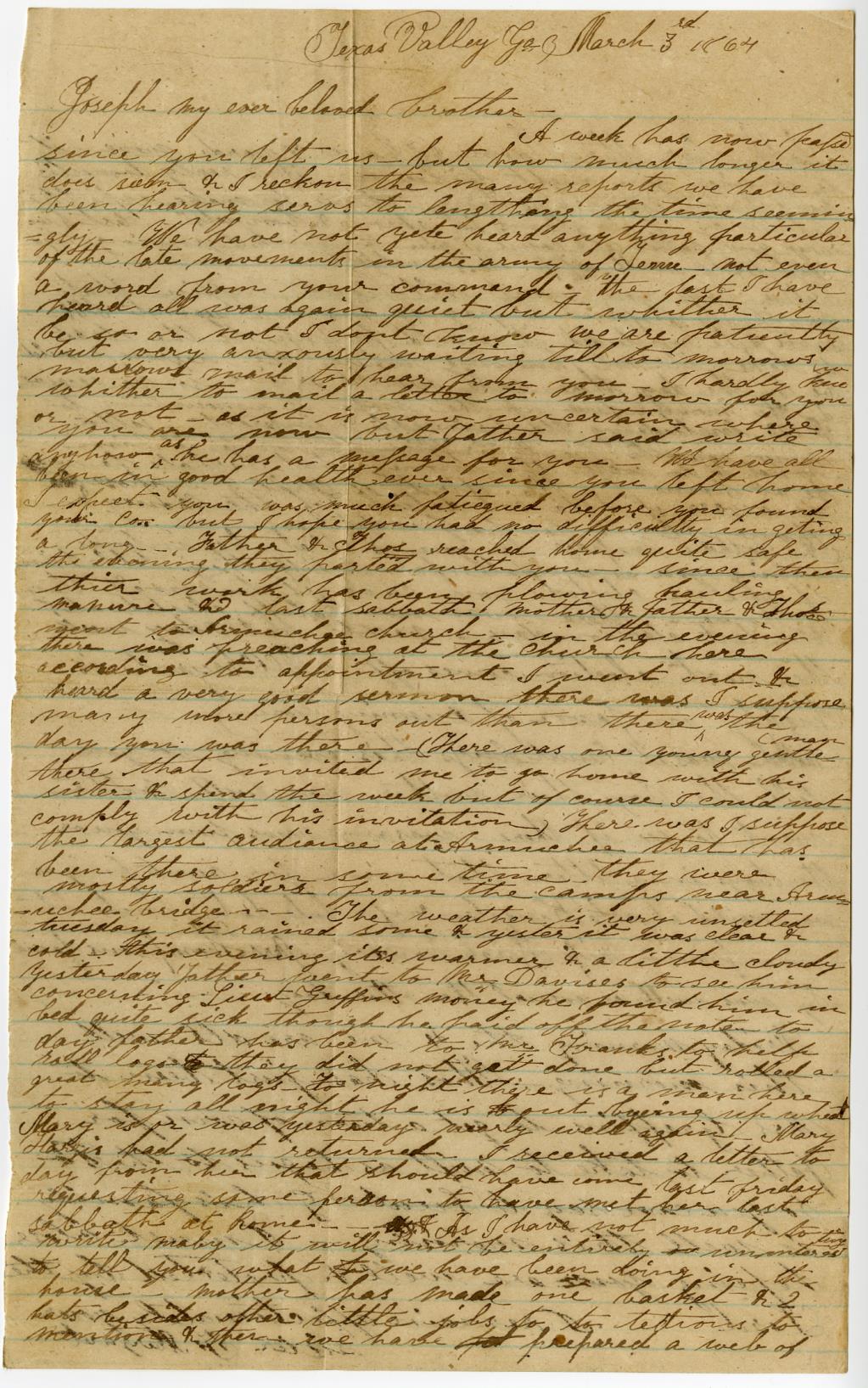 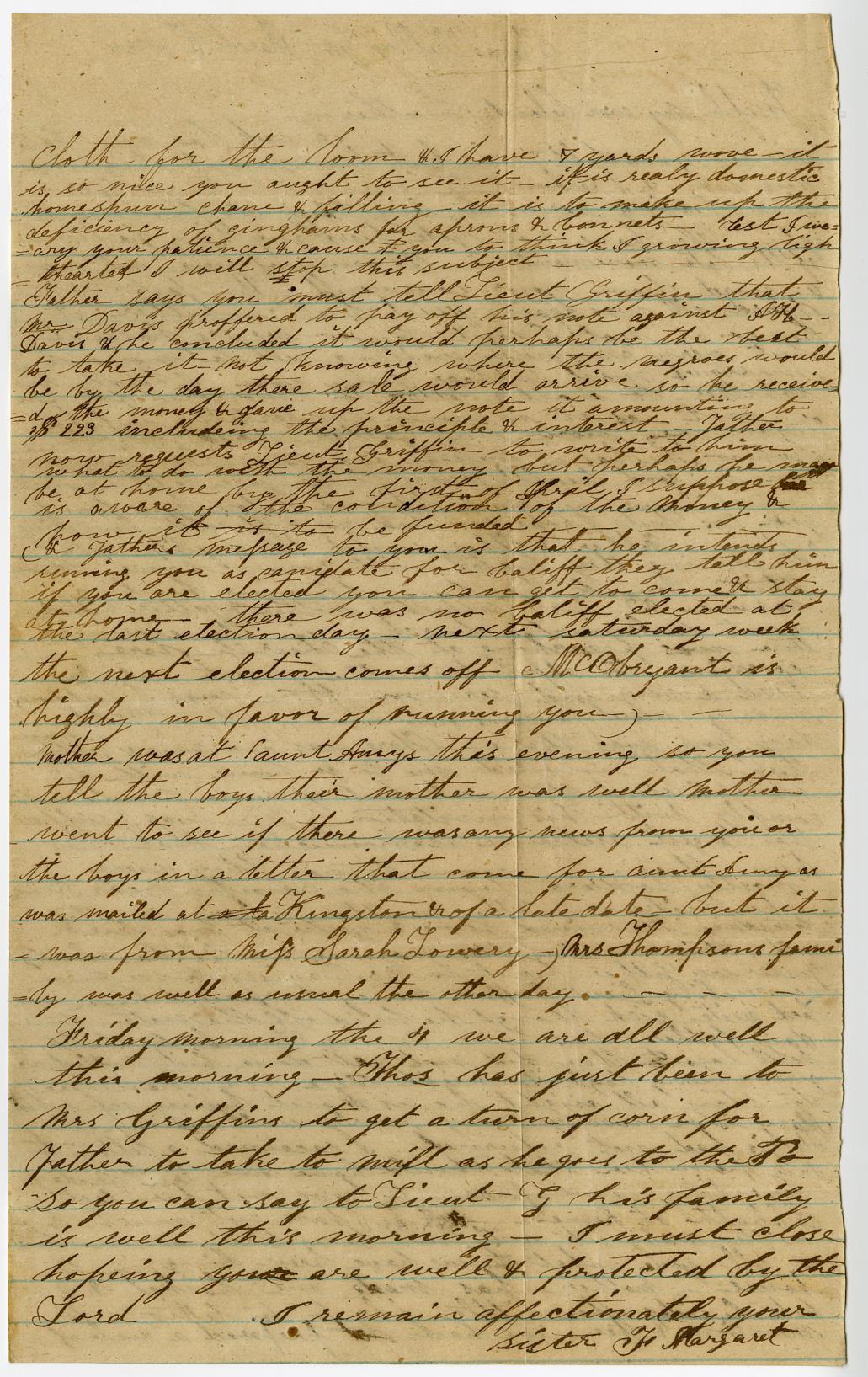 Joseph my ever beloved brother –

A week has now passed since you left us, but how much longer it does seem & I reckon the many reports we have been hearing serve to lengthen the time seemingly. We have not yet heard anything particular of the late movements in the army of Tenn. not even a word from your command. The last I have heard all was again quiet but whither it be so or not I don’t know we are patiently but very anxiously waiting till to morrows mail to hear from you. I hardly kno whither to mail a letter to morrow for you or not, as it is now uncertain where you are now but Father said write anyhow as he has a message for you. We have all been in good health ever since you left home. I expect you was much fatigued before you found your Co. but I hope you had no difficulty in geting a long. Father & Thos. reached home quite safe the evening they parted with you. Since then their work has been plowing, hauling manure & last sabbath mother & father & Thos. went to Armuchee Church. in the evening there was preaching at the church here according to appointment I went out & heard a very good sermon there was I suppose many more persons out than there was the day you was there. (There was one young gentleman there that invited me to go home with his sister & spend the week but of course I could not comply with his invitation) There was I suppose the largest audience at Armuchee that has been there in some time, they were mostly soldiers from the camps near Armuchee bridge. The weather is very unsettled Tuesday, it rained some & yester it was clear & cold. this evening it’s warmer & a little cloudy. yesterday father went to Mr. Davises to see him concerning Lieut. Griffin’s money he found him in bed quite sick though he paid off the note to day father has been to Mr. Franks to help roll logs & they did not get done but rolled a great many logs. To night there is a man here to stay all night he is out byeing up wheat. Mary is or was yesterday nearly well again. Mary [Hargis?] had not returned. I received a letter to day from her that should have come last Friday requesting some person to have met her last sabbath at home. As I have not much to write maby it will not be entirely uninteresting to tell you what we have been doing in the house. mother has made one basket & 2 hats besides other little jobs to tedious to mention & then we have prepared a web of cloth for the loom & I have 7 yards wove. it is so nice you aught to see it. it is realy domestic homespun [?] & filling it is to make up the deficiency of ginghams for aprons & bonnets. lest I weary your patience & cause you to think I growing lighthearted I will stop this subject.

Father says you must tell Lieut. Griffin that Mr. Davis proffered to pay off his note against A.H. Davis & he concluded it would perhaps be the best to take it not knowing where the negroes would be by the day there [sale?] would arrive so he received the money & gave up the note it amounting to $223 including the principle & interest. Father now requests Lieut. Griffin to write to him what to do with the money but perhaps he may be at home by the first of April. I suppose he is aware of the condition of the money & how it is to be funded. & father’s message to you is that he intends running you as candidate for baliff they tell him if you are elected you can get to come & stay at home. there was no baliff elected at the last election day. next Saturday week the next election comes off. McObryant is highly in favor of running you.

Mother was at Aunt Amy’s this evening so you tell the boys their mother was well Mother went to see if there was any news from you or the boys in the letter that came for Aunt Amy as was mailed at Kingston & of a late date, but it was from Miss Sarah Lowery. Mrs. Thompson’s family was well as usual the other day.

Friday morning the 7 we are all well this morning. Thos. has just been to Mrs. Griffin’s to get a turn of corn for Father to take to mill as he goes to the [?] so you can say to Lieut. G. his family is well this morning. I must close hopeing you are well & protected by the Lord. I remain affectionately your