28 March 1864: “…he knows of no disease so prostrating as diptheria & that in such a severe attack as Johnnie’s has been it takes weeks and sometimes months to recover entirely…” 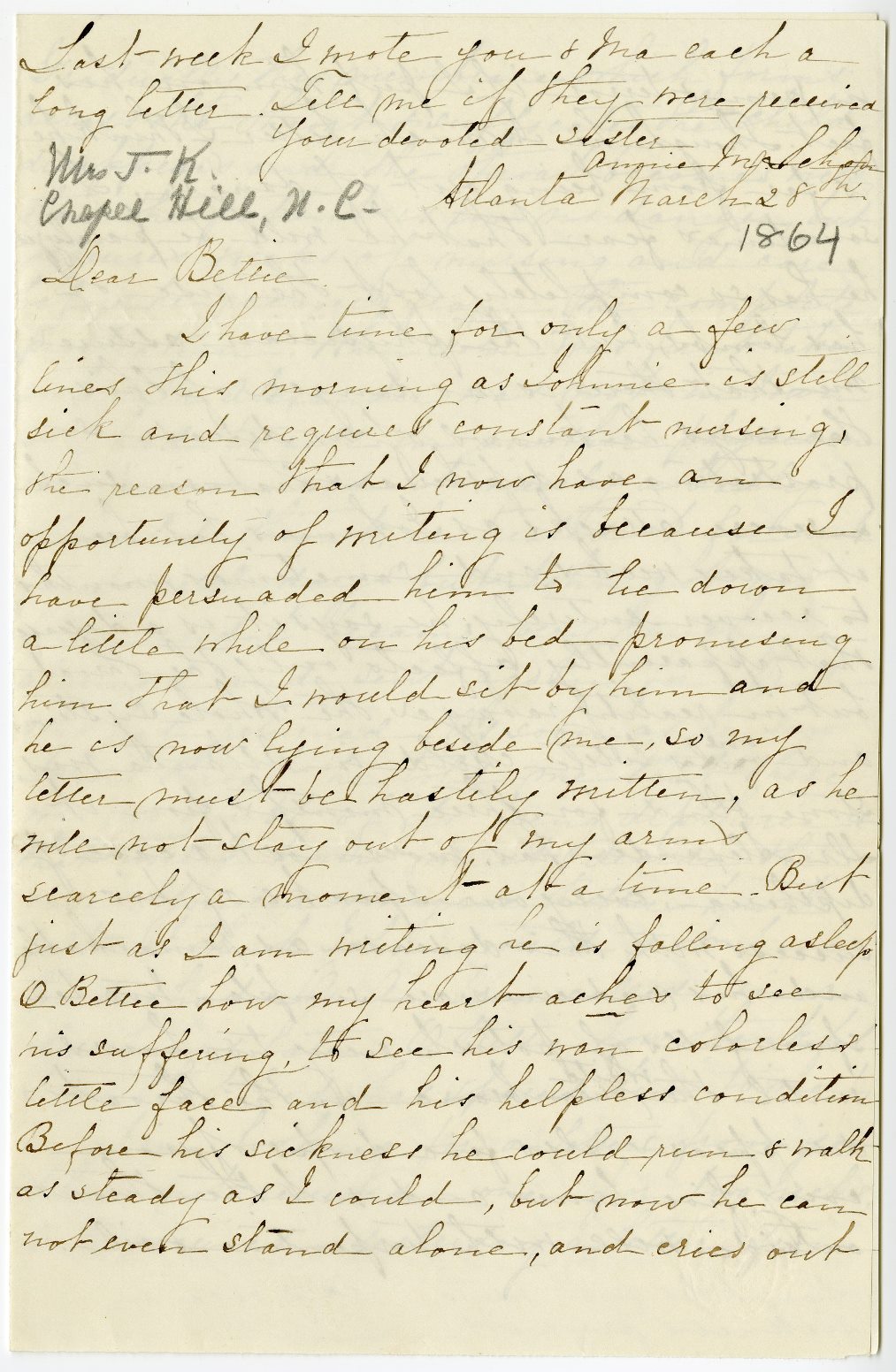 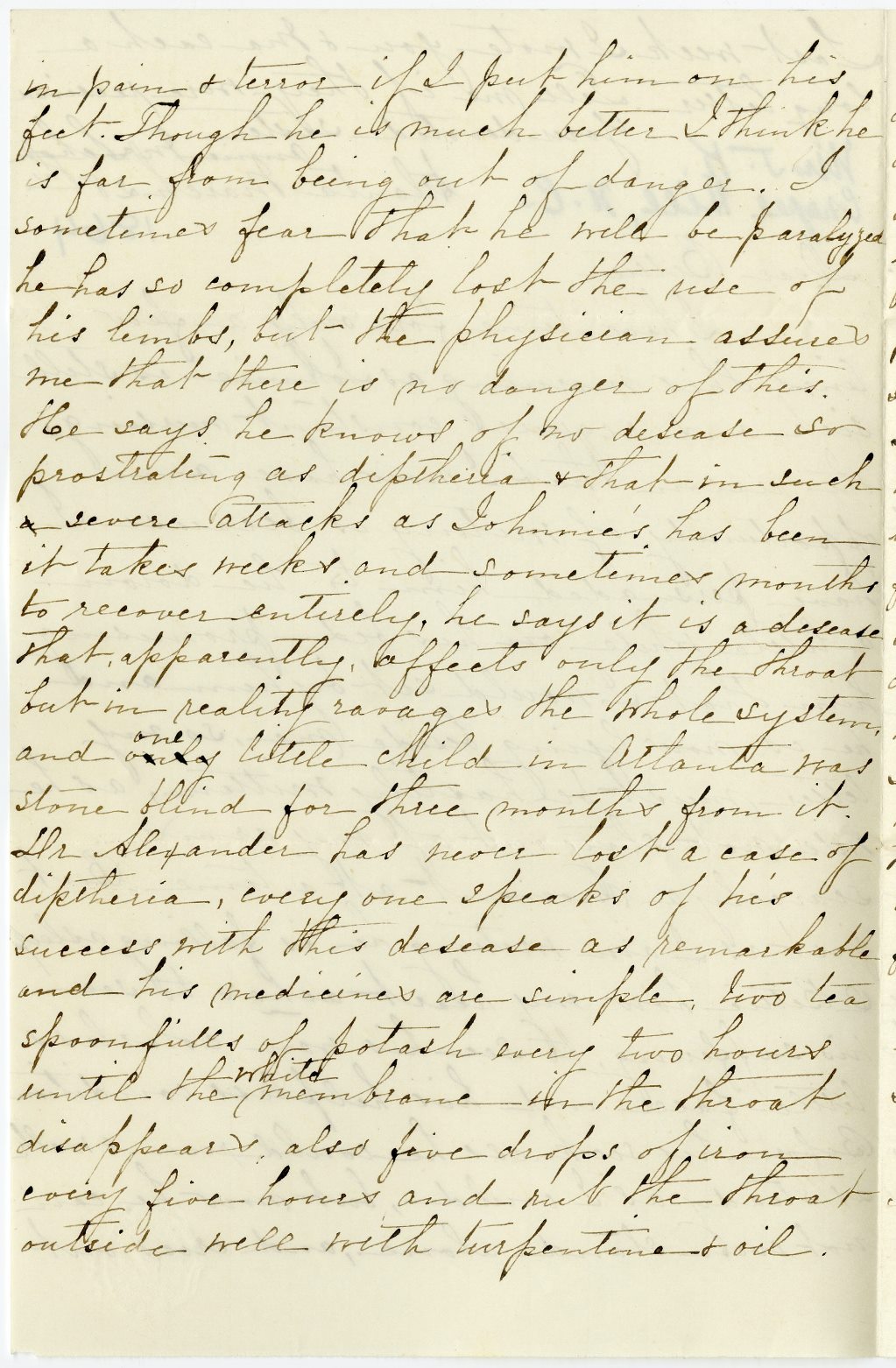 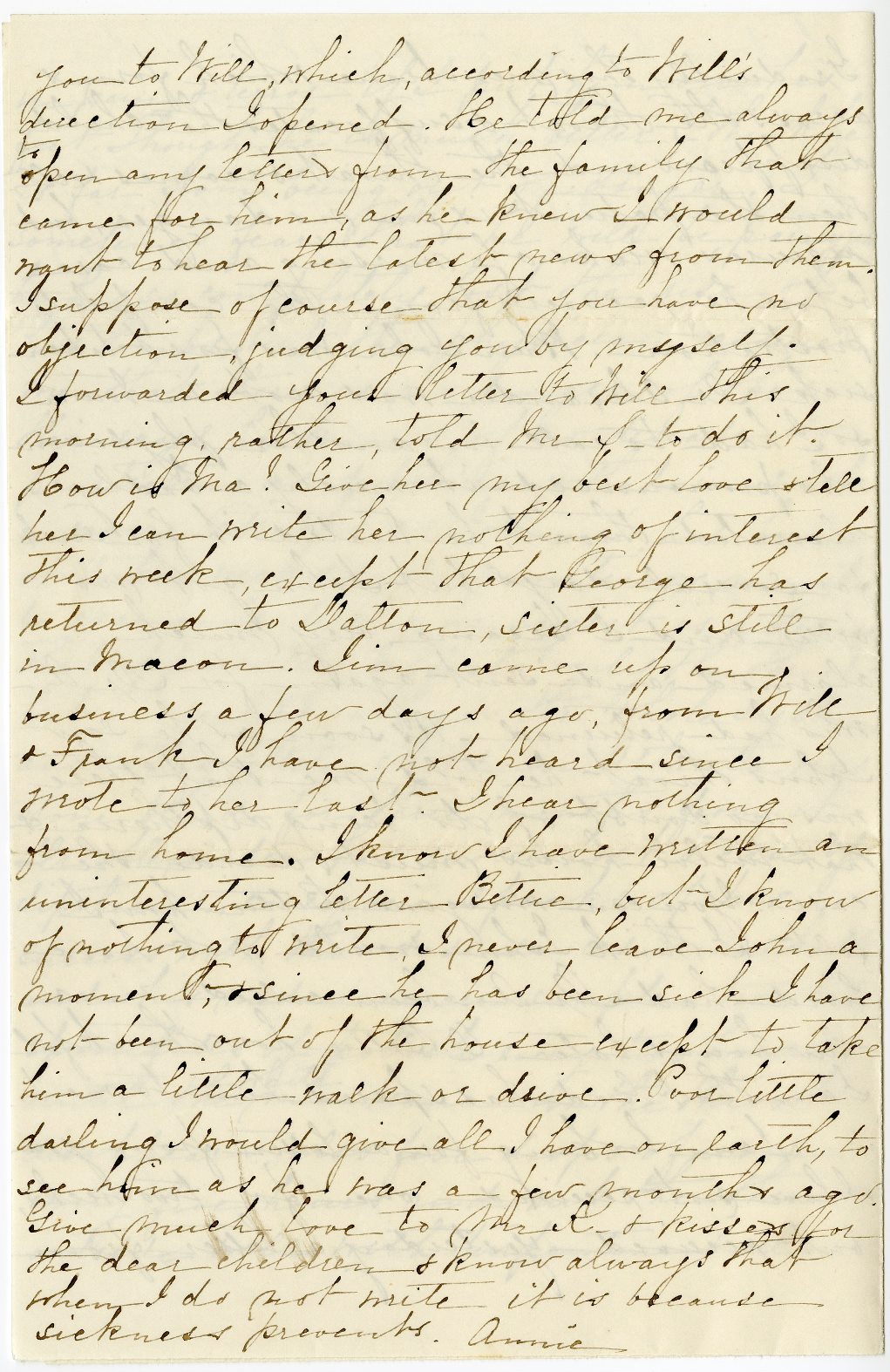 I have time for only a few lines this morning as Johnnie id still sick and requires constant nursing, the reason that I now have an opportunity of writing is because I have persuaded him to be down a little while on his bed promising him that I would sit by him and he is now lying beside me, so my letter must be hastily written, as he will not stay out of my arms scarcely a moment at a time.  But just as I am writing he is falling asleep.  O Bettie how my heart aches to see his suffering, to see his colorless little face and his helpless condition.  Before his sickness he could run & walk as steady as I could, but now he can not even stand alone, and cries out in pain & terror if I put him on his feet.  Though he is much better I think he is far from being out of danger. I sometimes fear that he will be paralyzed he has so completely list the use of his limbs, but the physician assures me that there is no danger of this.  He says he knows of no disease so prostrating as diptheria & that in such a severe attack as Johnnie’s has been it takes weeks and sometimes months to recover entirely, he says it is a disease that, apparently, affects only the throat but in reality ravages ht whole system  and one little child in Atlanta was stone blind for three months from it.  Dr. Alexander has never lost a case of diptheria, every one speaks of his success with this disease as remarkable and his medicines are simple, two tea spoonfuls of potash every two hours  until the white membrane in the throat disappears, also five drops of iron every five hours and rub the throat outside well with turpentine & oil.

Gradually this membrane which forms across the throat & suffocates the child disappears and the throat becomes well, then the patient is in no danger, but requires weeks of nursing and care before he recovers from the complete prostration. When John was first taken sick Dr. Alexander was not in town so I had to call in another physician who pronounced it merely a badly ulcerated throat, he treated it for such for several days but John got no better and I became very much alarmed and sent again for Dr. A_ who had returned. As soon as he saw Johns throat he told me that there was no doubt of its being diptheria & that twelve hours must decide that case. You can imagine Bettie how I felt. I think John would not have lived had Dr. A. been called in a few hours later.  O Bettie how thankful I am that God has spared him to me!

I am looking for a letter from you I have not received one for two weeks, but received yesterday a letter from you to Will, which according to Will’s direction I opened.  He told me always to open any letter from the family that came for him, as he knew I would want to hear that latest news from them.  I suppose of course that you have no objection, judging you by myself. I forwarded your letter to Will this morning rather, told Mr. S. to do it.  How is Ma? Give her my best love & tell her I can write her nothing of interest this week, except that George has returned to Dalton, sister is still in Macon.  Jim came up on business a few days ago, from Will & Frank I have not heard since I wrote to her last.  I hear nothing from home. I know I have written an uninteresting letter Bettie, but I know of nothing to write, I never leave John a moment, & since he has been sick I have not been out of the house except to take him a little walk or drive. Poor little darling I would give all I have on earth to see him as he was a few months ago.  Give much love to Mr. K. & kisses for the dear children & know always that when I do not write it is because sickness prevents.  Annie

Last week I write you & Ma each a long letter.  Tell me if they were received. Your devoted sister