Item description: In this letter, Thomas L. Norwood, wrote from Richmond, Va., to his uncle Walter W. Lenoir, catching him up on news of the 37th North Carolina Troops, Company A. Norwood reported on the prosecution of the case against Colonel William E. Peters, 21st Virginia Cavalry, who enlisted into his company a group of deserters from the 37th North Carolina. He also described a series of desertions by two other soldiers from Company A, George Black and Jeremiah Blackburn, who eventually were tried, condemned, and shot for their crimes. Norwood and Company A nevertheless remained upbeat. They reenlisted unanimously and confidently anticipated that Lee would whip Grant in the forthcoming battle, what would be the battle of Spotsylvania. Norwood only wondered why Lee waited to lead out, seemingly allowing Grant time to gather strength. 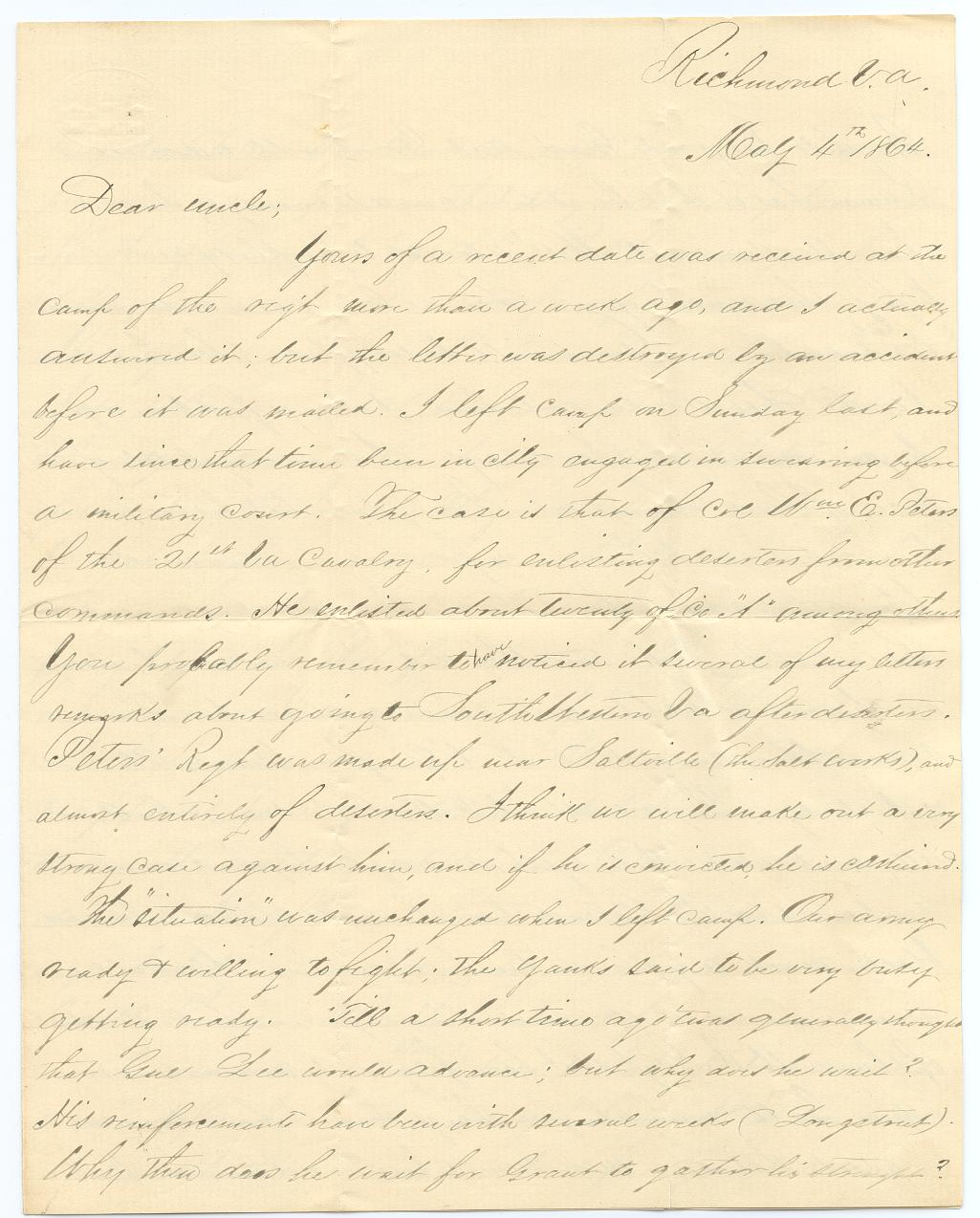 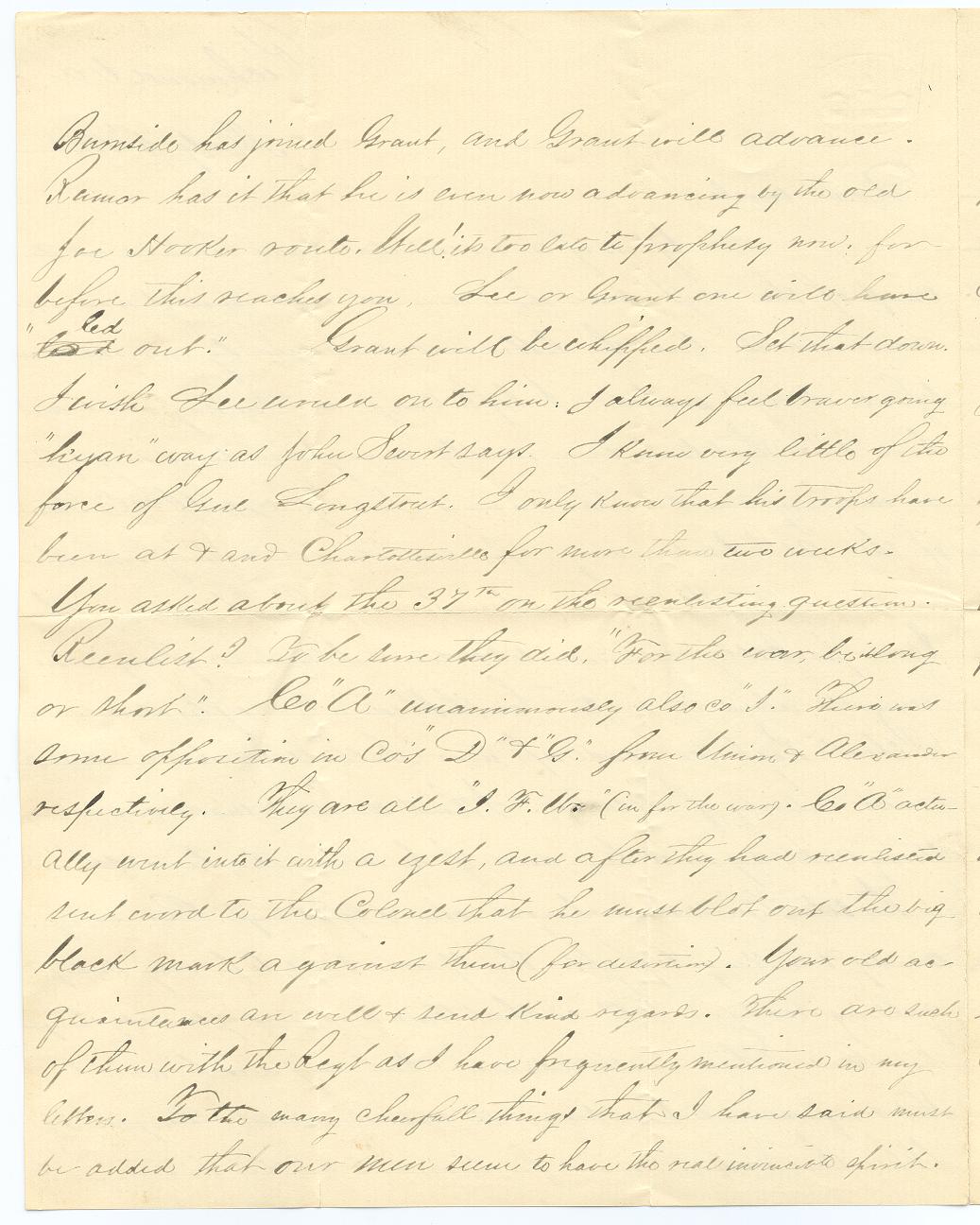 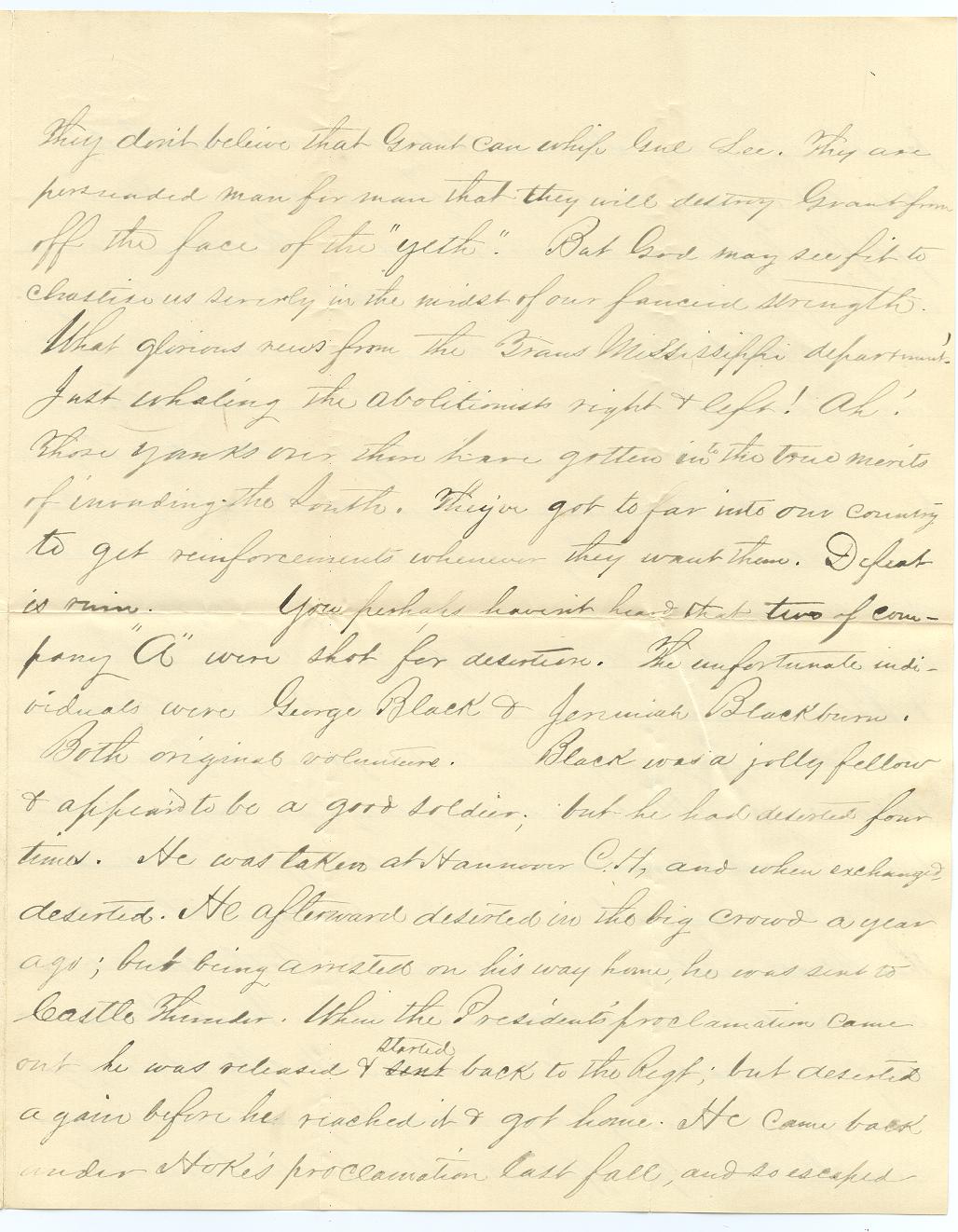 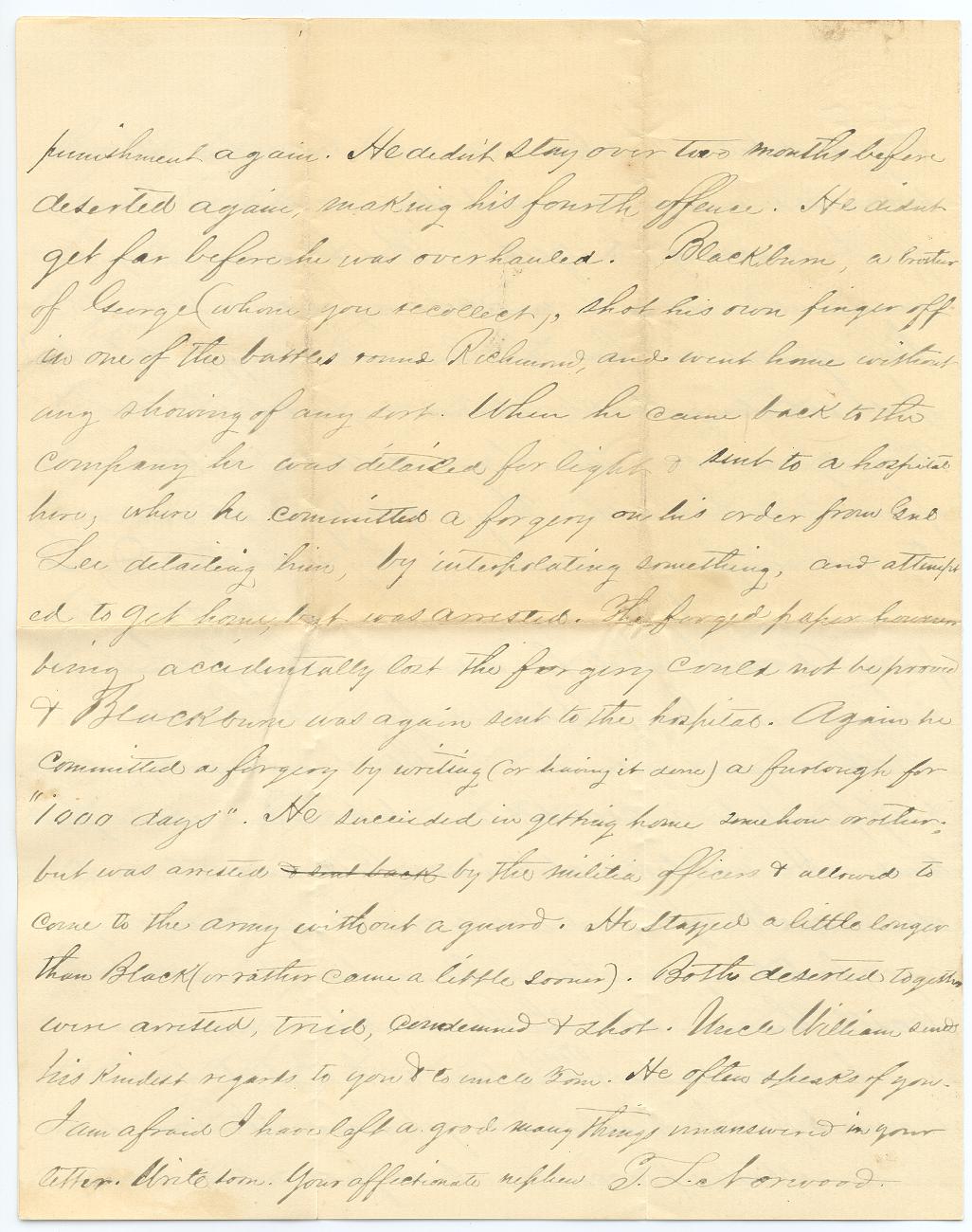 Yours of a recent date was received at the camp of the reg’t more than a week ago, and I actually answered it; but the letter was destroyed by an accident before it was mailed. I left camp on Sunday last, and have since that time been in city engaged in swearing before a military court. The case is that of Col Wm E. Peters of the 21st Va Cavalry, for enlisting deserters from other commands. He enlisted about twenty of Co “A” among others. You probably remember to have noticed it several of my letters remarks about going to South Western Va after deserters. Peters’ Regt was made up near Saltville (the Salt works), and almost entirely of deserters. I think we will make out a very strong case against him, and if he is convicted he is cashiered.

The “situation” was unchanged when I left camp. Our army ready & willing to fight; the Yanks said to be very busy getting ready. Till a short time ago twas generally thought that Gnl Lee would advance; but why does he wait? His reinforcements have been with several weeks (Longstreet). Why then does he wait for Grant to gather his strength? Burnside has joined Grant, and Grant will advance. Rumor has it that he is even now advancing by the old Joe Hooker route. Well it’s too late to prophesy now, for before this reaches you, Lee or Grant one will have “led out.” Grant will be whipped. Set that down. I wish Lee would on to him. I always feel braver going “h’yan” way as John Severt says. I know very little of the force of Genl Longstreet. I only know that his troops have been at & Charlottesville for more than two weeks.

You asked about the 37th on the reenlisting question. Reenlist? To be sure they did. “For the war, be it long or short.” Co “A” unanimously also co “I.” There was some opposition in Co’s “D” & “G” from Union & Alexander respectively. They are all “I.F.W.” (in for the war). Co “A” actually went into it with a zest, and after they had reenlisted sent word to the Colonel that he must blot out the big black mark against them (for desertion). Your old acquaintances are well & send kind regards. There are such of them with the Regt as I have frequently mentioned in my letters. To the many cheerfull things that I have said must be added that our men seem to have the real invincible spirit. They don’t believe that Grant can whip Gnl Lee. They are persuaded man for man that they will destroy Grant from off the face of the “yeth.” But God may see fit to chastise us severely in the midst of our fancied strength.

What glorious news from the Trans Mississippi department. Just whaling the abolitionists right & left! Oh! Those yanks over there have gotten into the true merits of invading the South. They’ve got to far into our country to get reinforcements whenever they want them. Defeat is ruin. You perhaps haven’t heard that two of company “A” were shot for desertion. The unfortunate individuals were George Black & Jeremiah Blackburn. Both original volunteers. Black was a jolly fellow and appeared to be a good soldier; but he had deserted four times. He was taken at Hannover C.H., and when exchanged deserted. He afterward deserted in the big crowd a year ago; but being arrested on his way home, he was sent to Castle Thunder. When the President’s proclamation came out he was released & started back to the Regt; but deserted again before he reached it & got home. He came back under Hoke’s proclamation last fall, and so escaped punishment again. He didn’t stay over two months before deserted again, making his fourth offence. He didn’t get far before he was overhauled. Blackburn, a brother of George (whom you recollect), shot his own finger off in one of the battles round Richmond, and went home without any showing of any sort. When he came back to the company he was detailed for light & sent to a hospital here, where he committed a forgery on his order from Gnl Lee detailing him, by interpolating something, and attempted to get home, but was arrested. The forged paper however being accidentally lost the forgery could not be proven & Blackburn was again sent to the hospital. Again he committed a forgery by writing (or having it done) a furlough for “1000 days”. He succeeded in getting home somehow or other; but was arrested by the militia officers & allowed to come to the army without a guard. He Stayed a little longer than Black (or rather came a little sooner). Both deserted together were arrested, tried, condemned & shot. Uncle William sends his kindest regards to you & to uncle Tom. He often speaks of you. I am afraid I have left a good many things unanswered in your letter. Write soon. Your affectionate nephew T.L. Norwood.