11 May 1864: “… a woman who saw them cut the wires, as soon as they left, tied them together with some old wire and relieved us considerably.”

Item description: Letter, dated 11 May 1864, from Benedict Joseph Semmes to his wife. He discusses the engagements around Resaca, Georgia, including the Battle of Rocky Face Ridge.  He also notes news of a hasty marriage. 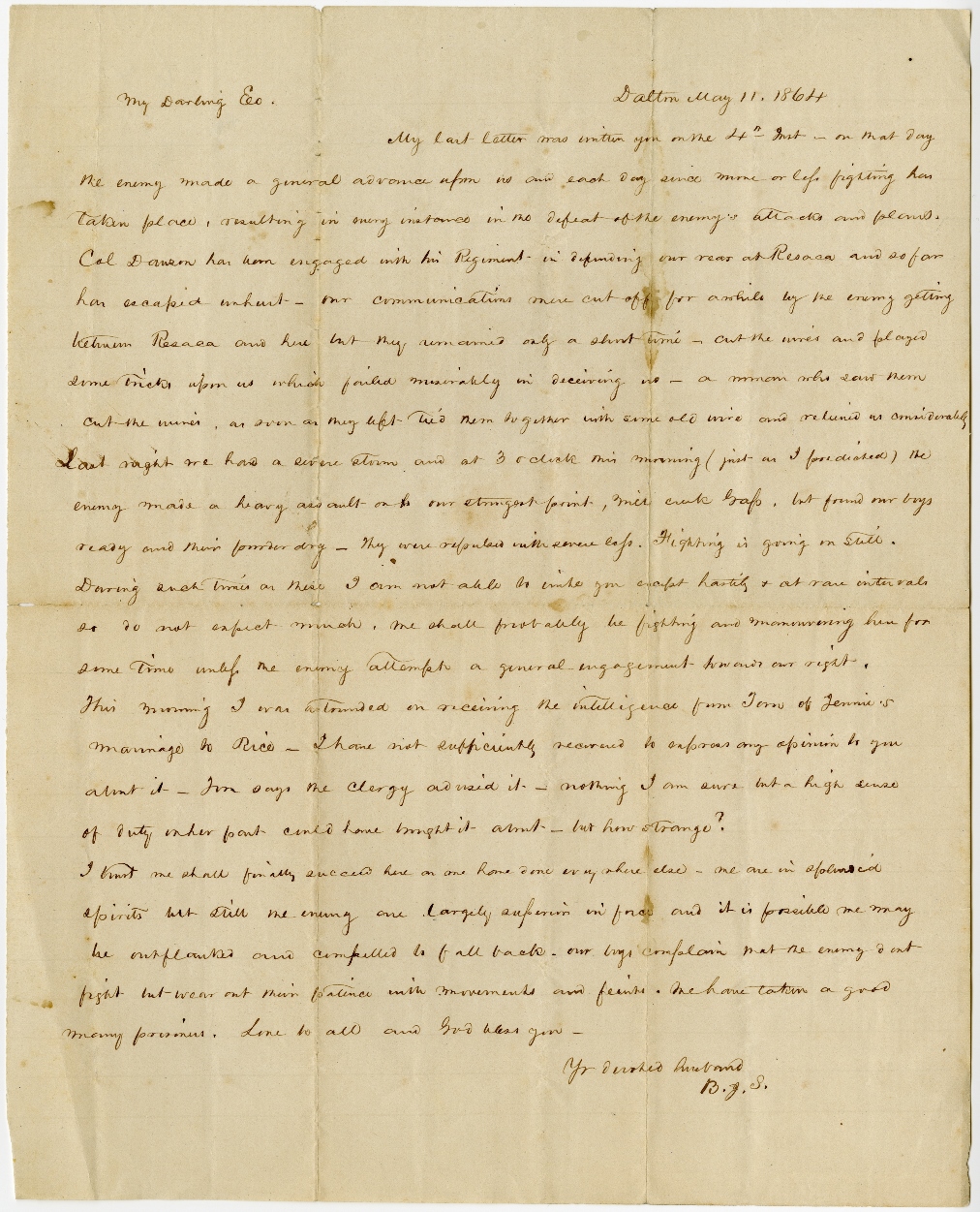 My last letter was written to you on the 4th inst.  – on that day the enemy made a general advance upon us and each day since more or less fighting has taken place resulting in every instance in the defeat of the enemy’s attacks and plans. Col. Dawson has been engaged with his regiment in defending our rear at Resaca and so far has escaped unhurt.  Our communications were cut off for awhile by the enemy getting between Resaca and here but they remained only a short time – cut the wires and played some tricks upon us which failed miserably in deceiving us – a woman who saw them cut the wires, as soon as they left, tied them together with some old wire and relieved us considerably.  Last night we had a severe storm and at 3 o’clock this morning (just as I predicted) the enemy made a heavy assault onto our strongest point, Mill Creek Gap, but found our boys ready and their powder dry – they were repulsed with severe loss. Fighting is going on still.  During such times as these I am not able to write you except hastily & at rare intervals so do not expect much. We shall probably be fighting and maneuvering here for some time unless the enemy attempt a general engagement towards our right. This morning I was  astounded on receiving the intelligence from Tom on Jennie’s marriage to Rice.  I have not sufficiently recovered to express my opinion to you about it – Tom says the clergy advised it – nothing I am sure but a high sense of duty on her part could have brought it about – but how strange?

I trust we will finally succeed here as we have done every where else – we are in splendid spirits but still the enemy are largely superior in force and it is possible we may be outflanked and compelled to fall back.  Our boys complain that the enemy don’t fight but wear our their patience with movements and feints. We have taken a good many prisoners.  Love to all and God bless you.