12 May 1864: “The news is not very reliable but indicates that a great & bloody battle is being fought and that Grant is giving the rebels a bitter lesson.”

Posted on 12 May ’14 by Biff Hollingsworth

Item description: Letter, 12 May 1864, from Robert Finley to his fiancee, Mary A. Cabeen. Finley was a member of the 30th Illinois Infantry, serving in Tennessee, Mississippi, Alabama, Louisiana, and Georgia. 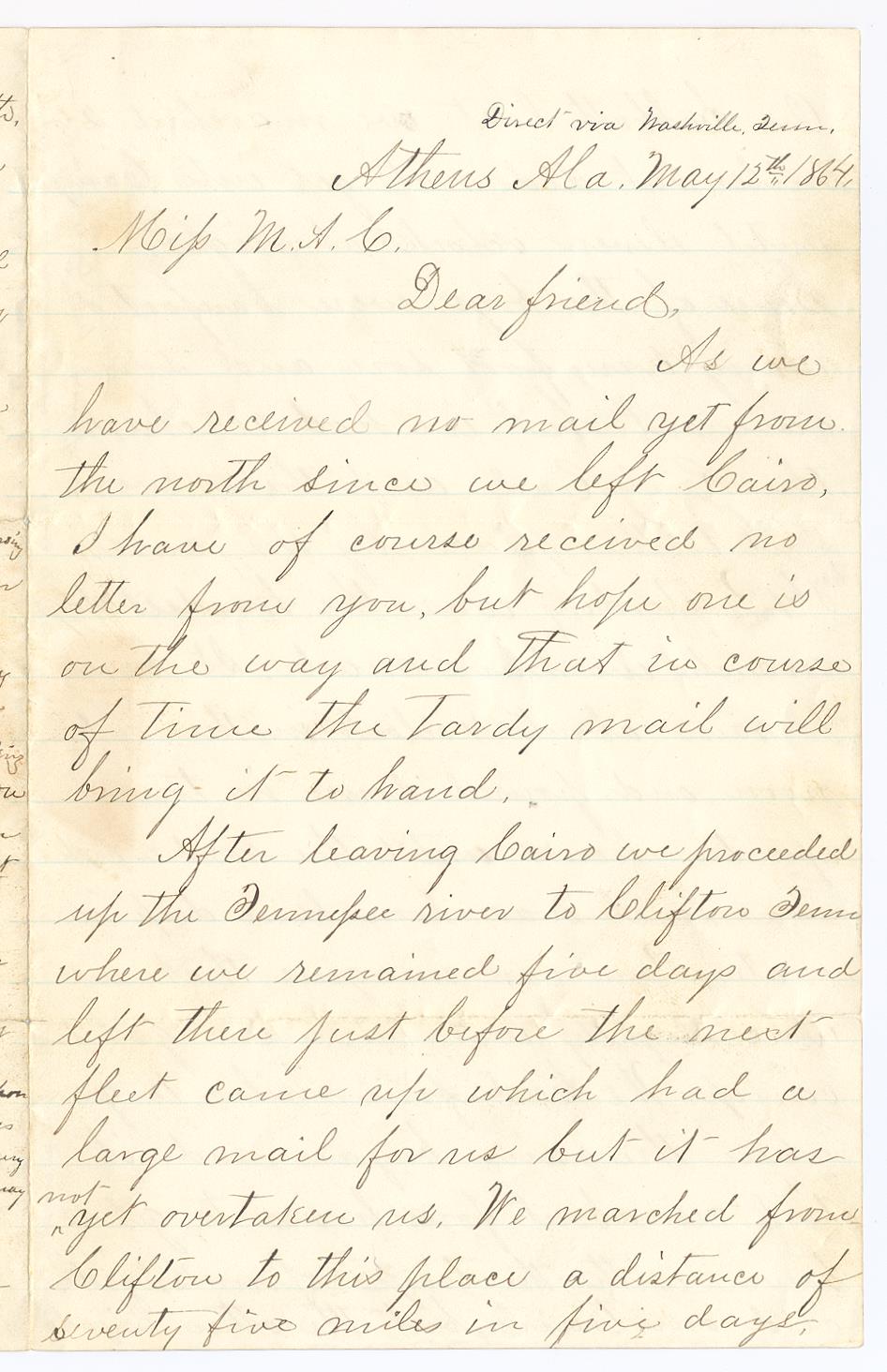 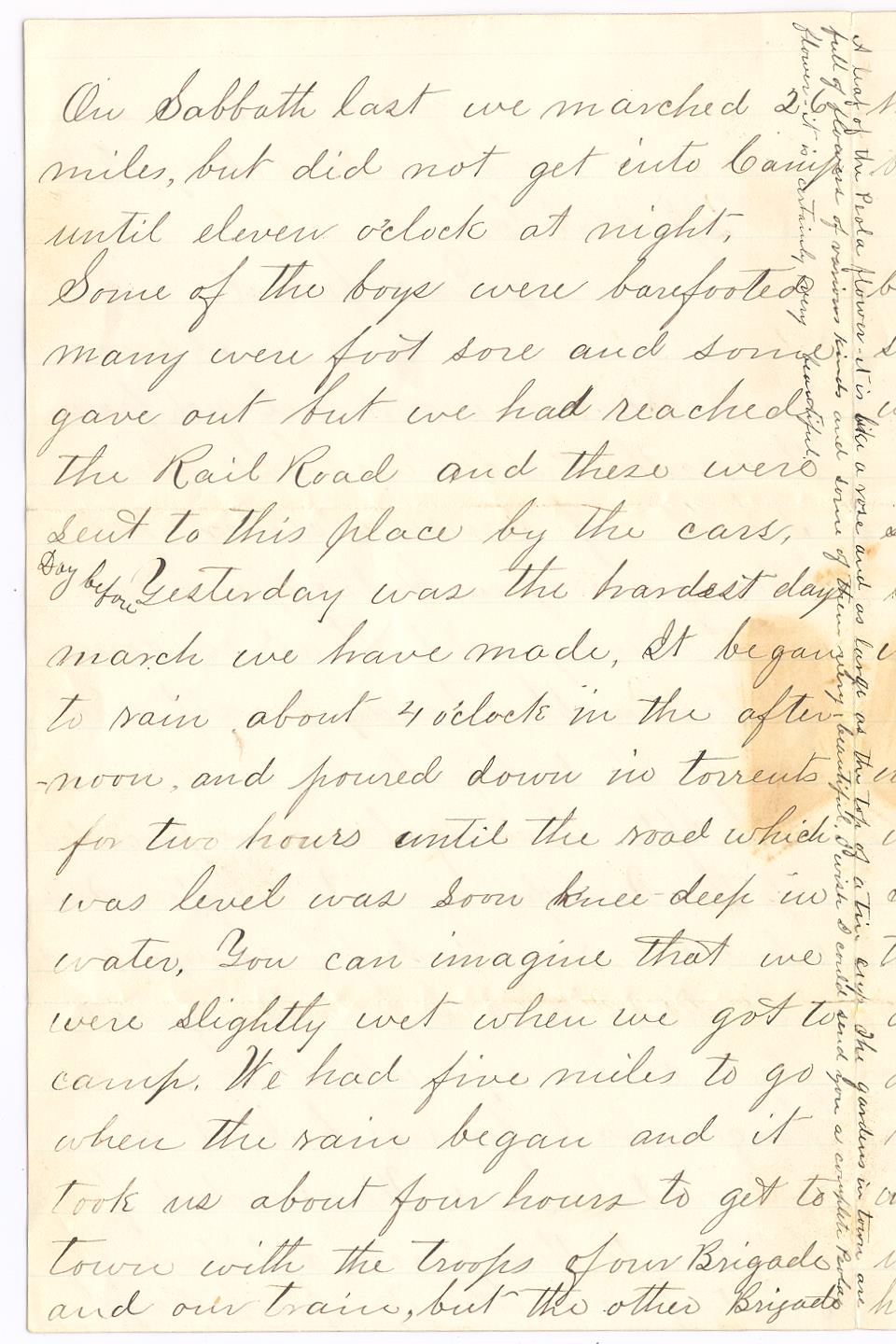 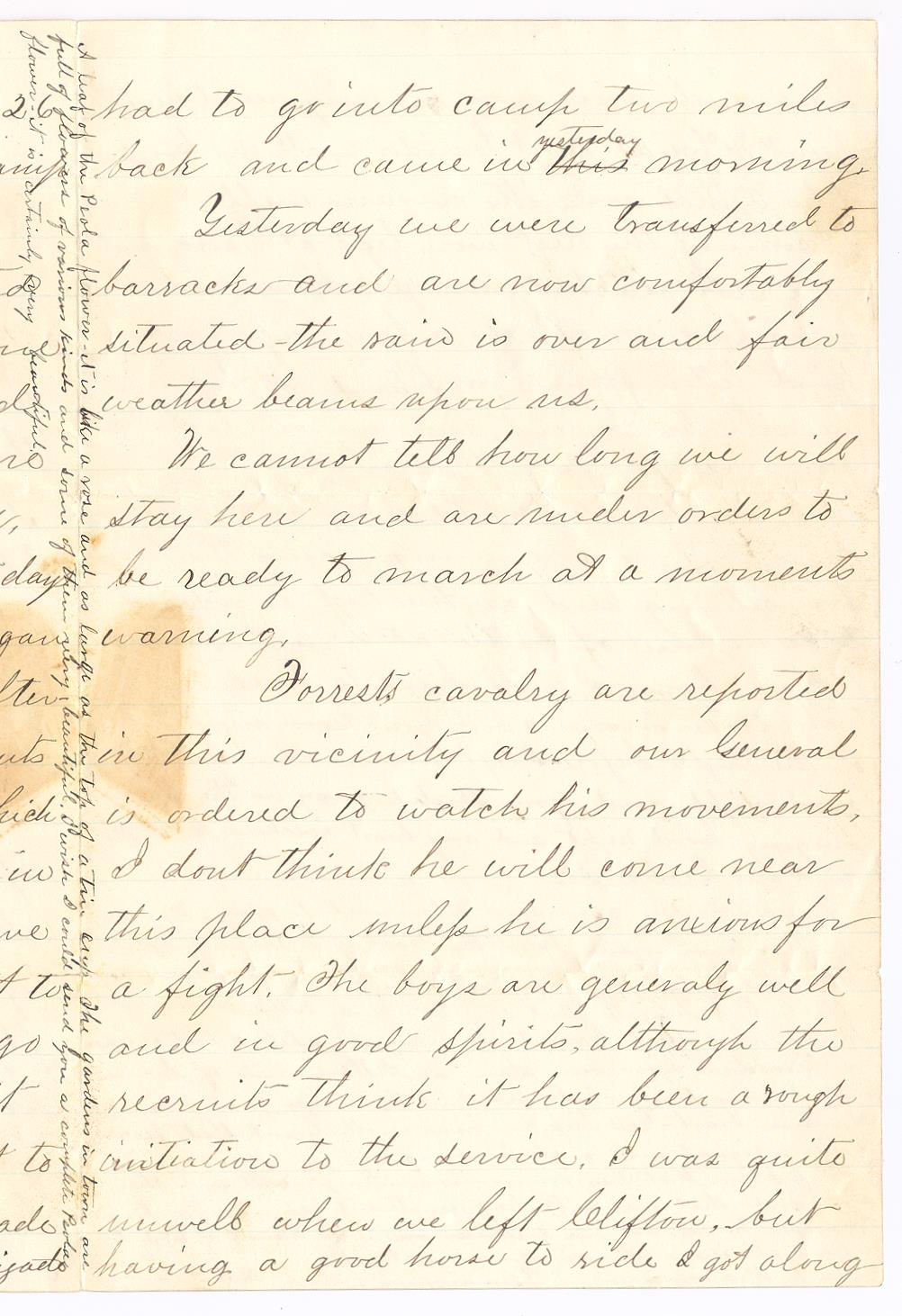 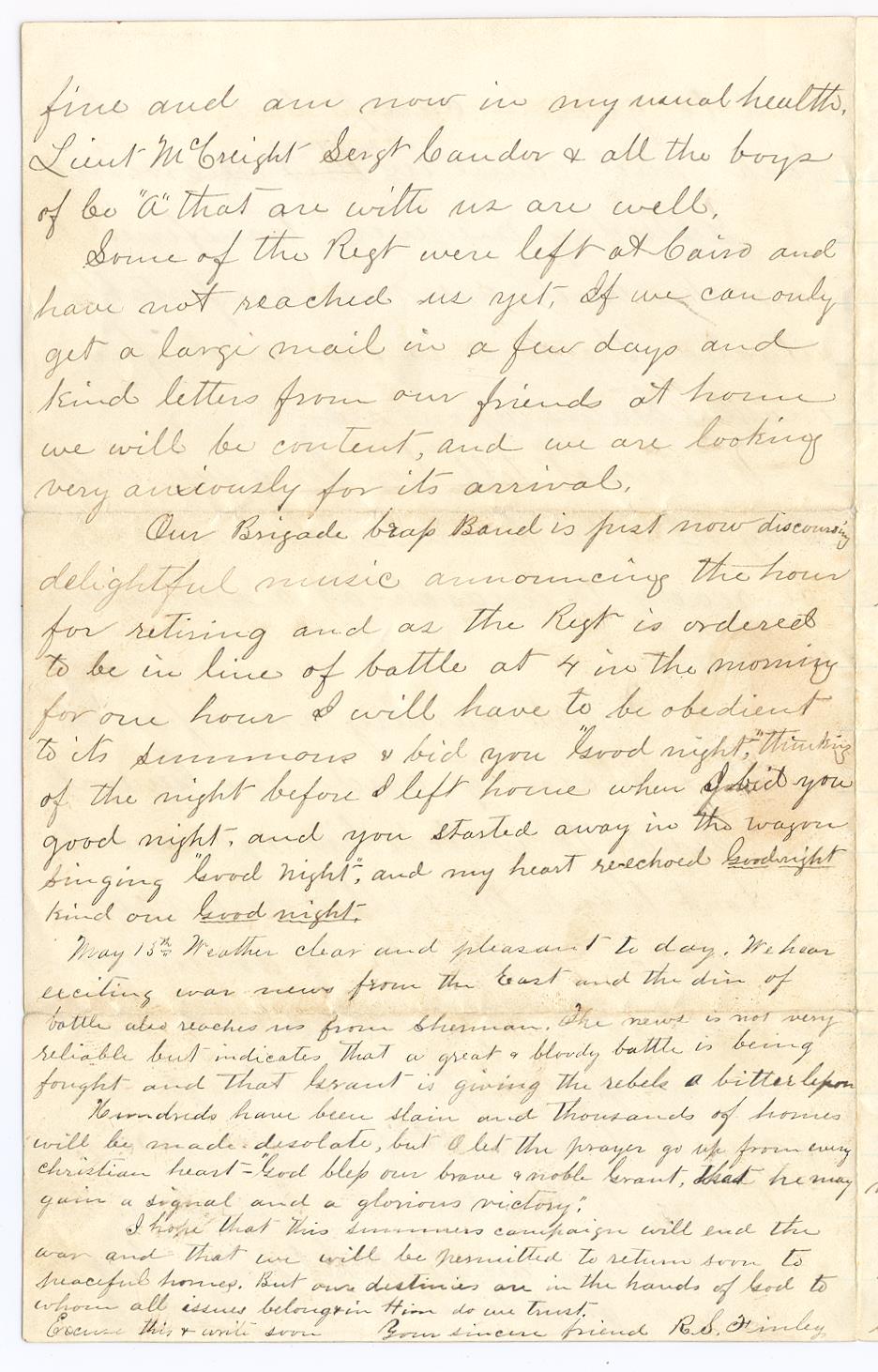 As we have received no mail yet from the north since we left Cairo, I have of course received no letter from you, but hope one is on the way and that in course of time the tardy mail will bring it to hand.

After leaving Cairo we proceeded up the Tennessee river to Clifton Tenn. where we remained five days and left there just before the next fleet came up which had a large mail for us but it has not yet overtaken us. We marched from Clifton to this place a distance of seventy five miles in five days.

On Sabbath last we marched 26 miles, but did not get into Camp until eleven o’clock at night. Some of the boys were barefooted, many were foot sore and some gave out but we had reached the Rail Road and these were sent to this place by the cars.

Day before yesterday was the hardest days march we have made, it began to rain about 4 o’clock in the afternoon and poured down in torrents for two hours until the road which was level was soon knee deep in water. You can imagine that we were slightly wet when we got to camp. We had five miles to go when the rain began and it took us about four hours to get to town with the troops of our Brigade and our train, but the other Brigade had to go into camp two miles back and came in yesterday morning.

Yesterday we were transferred to barracks and are now comfortably situated the rain is over and fair weather beams upon us.

We cannot tell how long we will stay here and are under orders to be ready to march at a moments warning.

Forrests cavalry are reported in this vicinity and our General is ordered to watch his movements. I don’t think he will come near this place unless he is anxious for a fight. The boys are generally well and in good spirits, although the recruits think it has been a rough initiation to the service. I was quite unwell when we left Clifton, but having a good horse to ride I got along fine and am now in my usual health. Lieut. McCreight Sergt. Cander & all the boys of Co. “A” that are with us are well.

Some of the Regt. were left at Cairo and have not reached us yet. If we can only get a large mail in a few days and kind letters from our friends at home we will be content, and we are looking very anxiously for its arrival.

Our Brigade brass band is just now discoursing delightful music announcing the hour for retiring and as the Regt. is ordered to be in line of battle at 4 in the morning for one hour I will have to be obedient to its summons & bid you “Good night,” thinking of the night before I left home when I bid you good night, and you started away in the wagon singing “Good night,” and my heart re-echoed Good night kind one Good night.

May 13th – Weather clear and pleasant to day. We hear exciting war news from the East and the din of battle also reaches us from Sherman. The news is not very reliable but indicates that a great & bloody battle is being fought and that Grant is giving the rebels a bitter lesson.

Hundreds have been slain and thousands of homes will be made desolate, but O let the prayer go up from every Christian heart – “God bless our brave & noble Grant, that he may gain a signal and a glorious victory.”

I hope that this summer’s campaign will end the war and that we will be permitted to return soon to peaceful homes. But our destinies are in the hands of God to whom all issues belonging Him do we trust.