20 May 1864: “If only the half of what we hear is true we have gained great and glorious victories.”

Posted on 20 May ’14 by Biff Hollingsworth

Item description: In this diary entry dated 20 May 1864, Samuel A. Agnew, a Presbyterian minister, teacher, farmer, and prominent local citizen in Tippah and Lee counties, Mississippi, noted confirmed victories at Spotsylvania and Drury’s Bluff and rumors of casualties and Union troop movements. 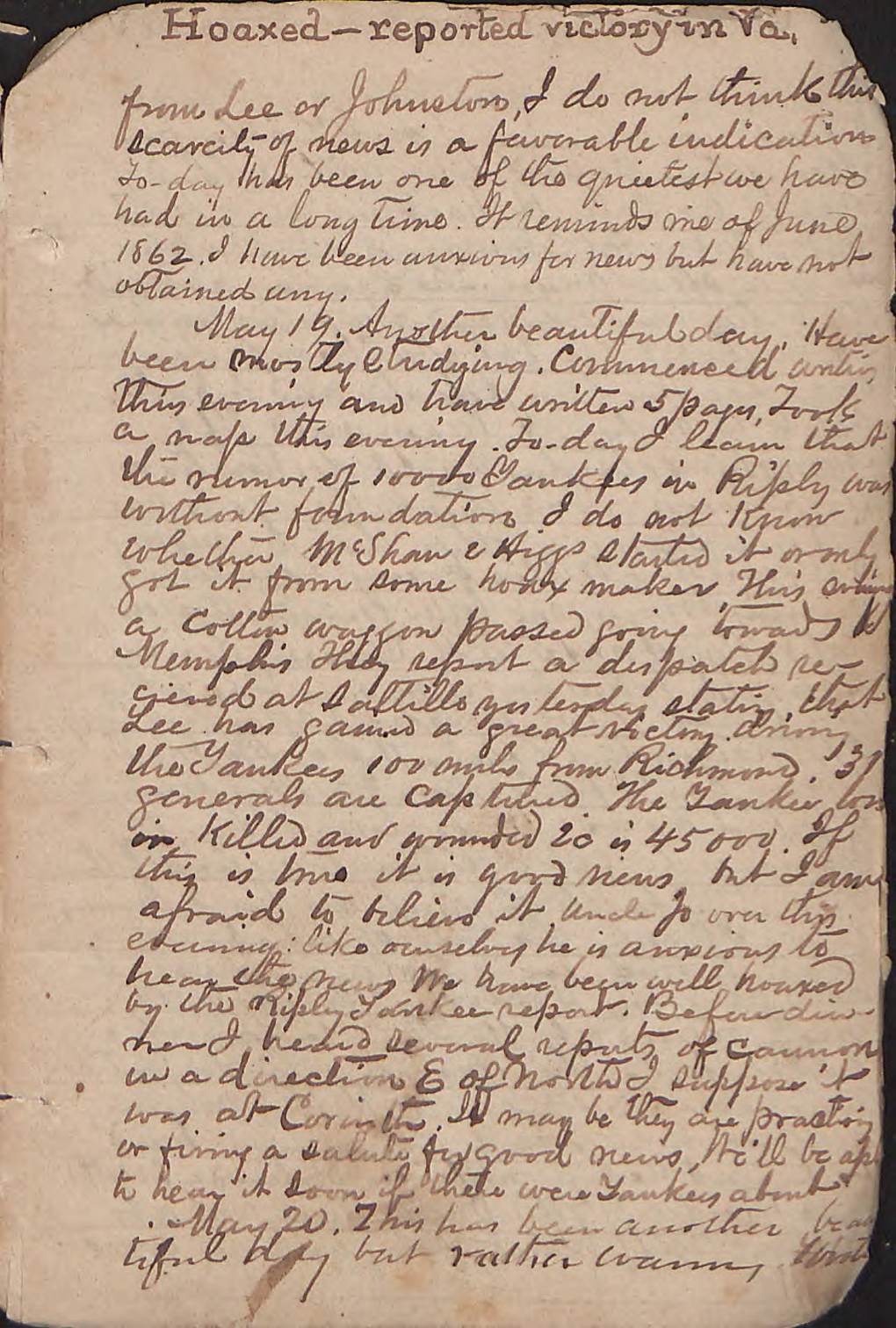 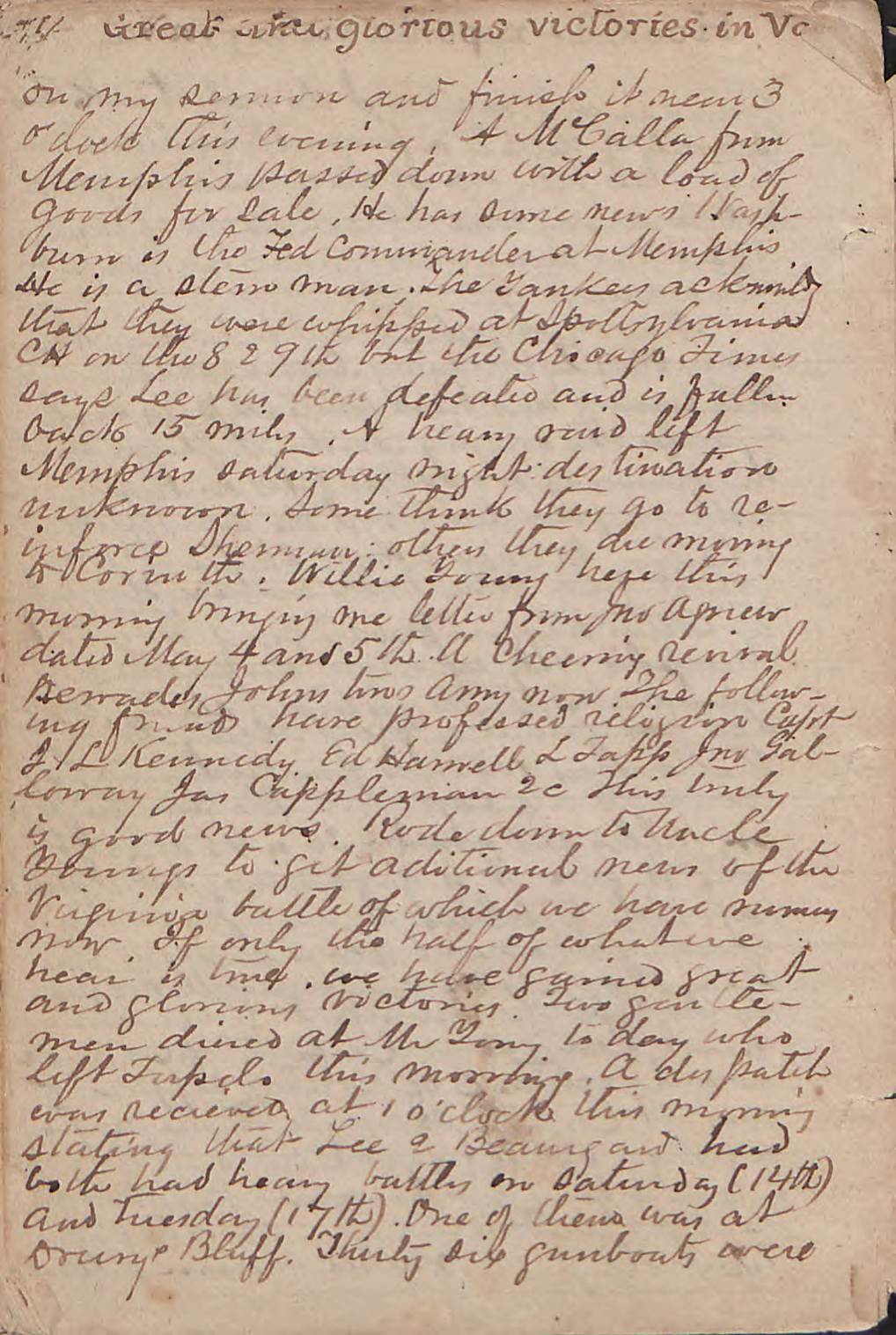 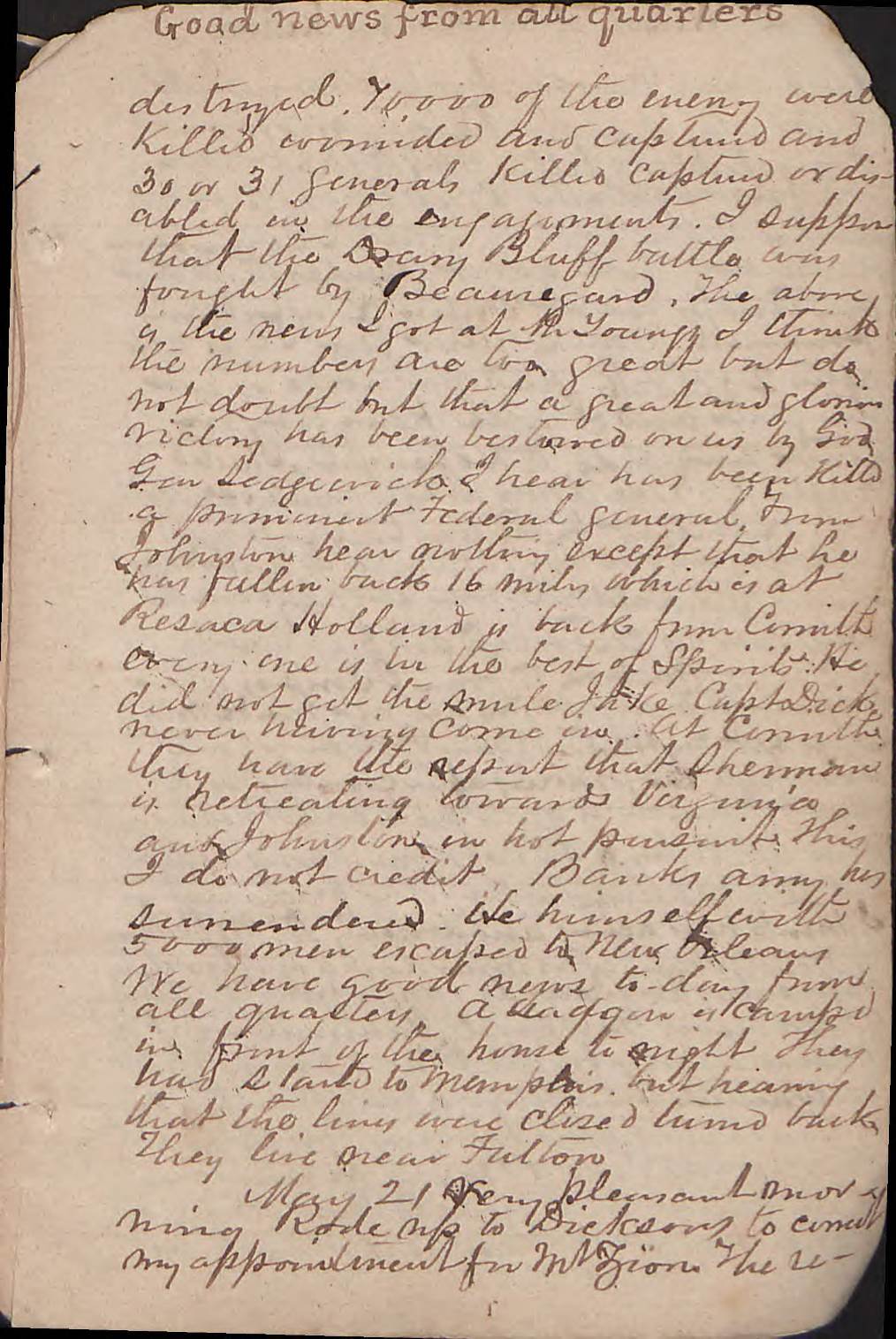 May 20 This has been another beautiful day but rather warm. Wrote on my sermon and finish it near 3 o’clock this evening. A M Calla from Memphis passed down with a load of goods for sale. He has some news Washburn is the Fed Commander at Memphis. He is a stern man. The Yankees acknowledge that they were whipped at Spottsylvania CH on the 8 and 9th but the Chicago Times says Lee has been defeated and is fallen back 15 miles. A heavy raid left Memphis Saturday night: destination unknown. Some think they go to reinforce Sherman: others they are moving to Corinth. Willis Young here this morning bringing me letter from no Agnew dated May 4 and 5th. A cheering revival serenades Johnstons army now. The following friends have professed religion Captain J L Kennedy Ed Harwell L Tapp Jno Galloway Jas Cappleman & c. This truly is good news. Rode down to Uncle Youngs to get aditional news of the Virginia battle of which we have rumors now. If only the half of what we hear is true, we have gained great and glorious victories. Two gentlemen dined at Mr Young today who left Tupelo this morning. A dispatch was received at 1 o’clock this morning stating that Lee & Beauregard had both had heavy battles on Saturday (14th) and Tuesday (17th). One of them was at Drurys Bluff. Thirty six gunboats were destroyed. 10,000 of the enemy were killed wounded and captured and 30 or 31 generals killed captured or disabled in the engagements. I suppose that the Drury Bluff battle was fought by Beauregard. The above is the news I got at the Youngs I think the numbers are too great but do not doubt but that a great and glorious victory has been bestowed on us by God. General Sedgwick I hear has been killed a prominent Federal general. From Johnston hear nothing except he has fallen back 16 miles which is at Resaca Holland is back from Corinth every one is in the best of Spirits. He did not get the mule Jake Capt Dick never having come in at Corinth they have the report that Sherman is retreating towards Virginia and Johnston in hot pursuit. This I do not credit. Banks army has surrendered. He himself with 5000 men escaped to New Orleans. We have good news today from all quarters A wagon is camped in front of the house tonight. They had started to Memphis but hearing that the lines were closed turned back. They live near Fulton