30 May 1864: “…every hour of the day the poor mangled fellows are being hauled into this place in wagons without springs over bad roads, a distance of 12 to 15 miles, the sun burning hot and the roads ankle deep in dust…”

Item description: Letter, dated 30 May 1864, from Joseph Semmes to his wife.  He discusses engagements in Georgia, caring for wounded soldiers, prisoners of war, and Sherman’s scorched earth tactics against the families of Confederate soldiers. 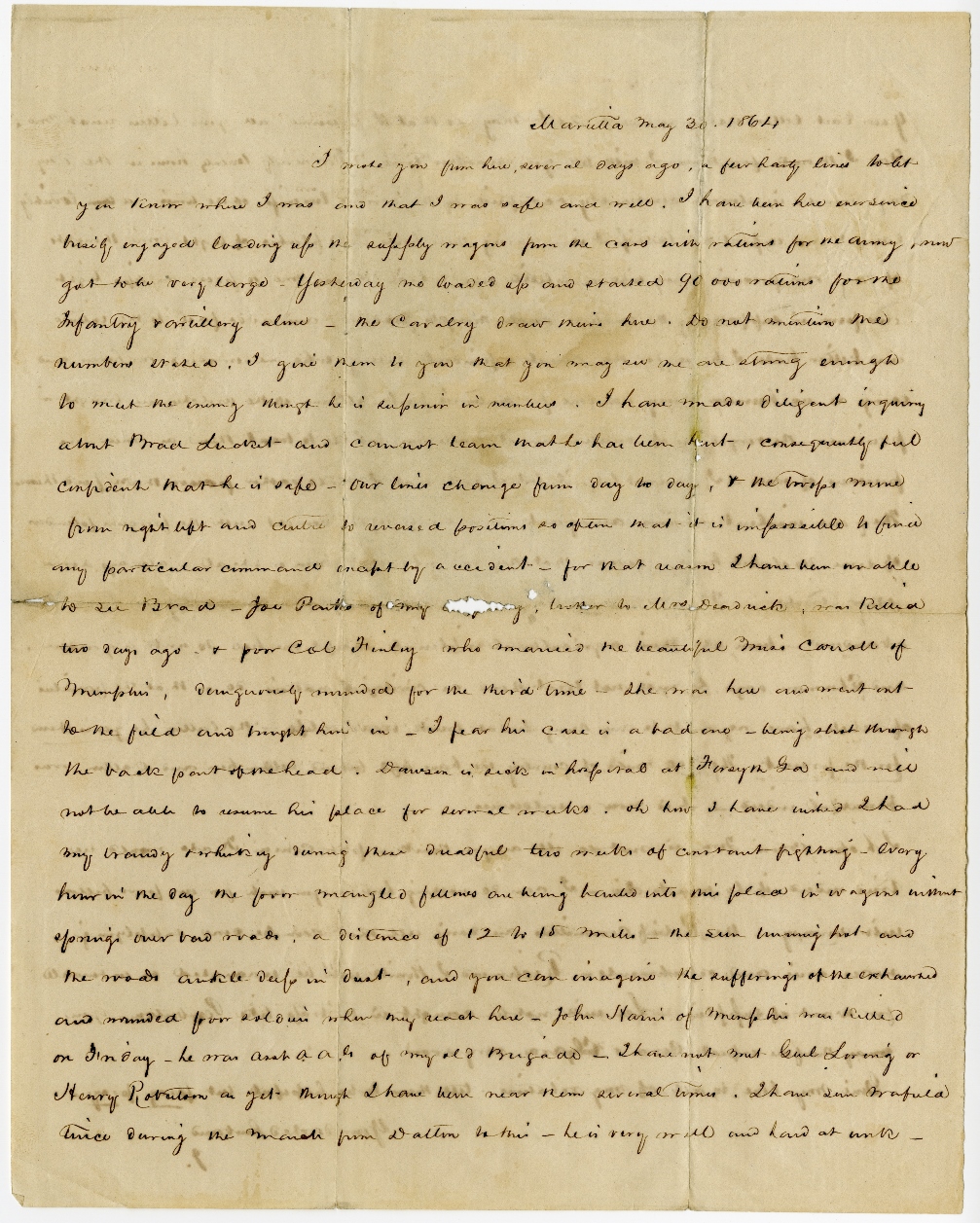 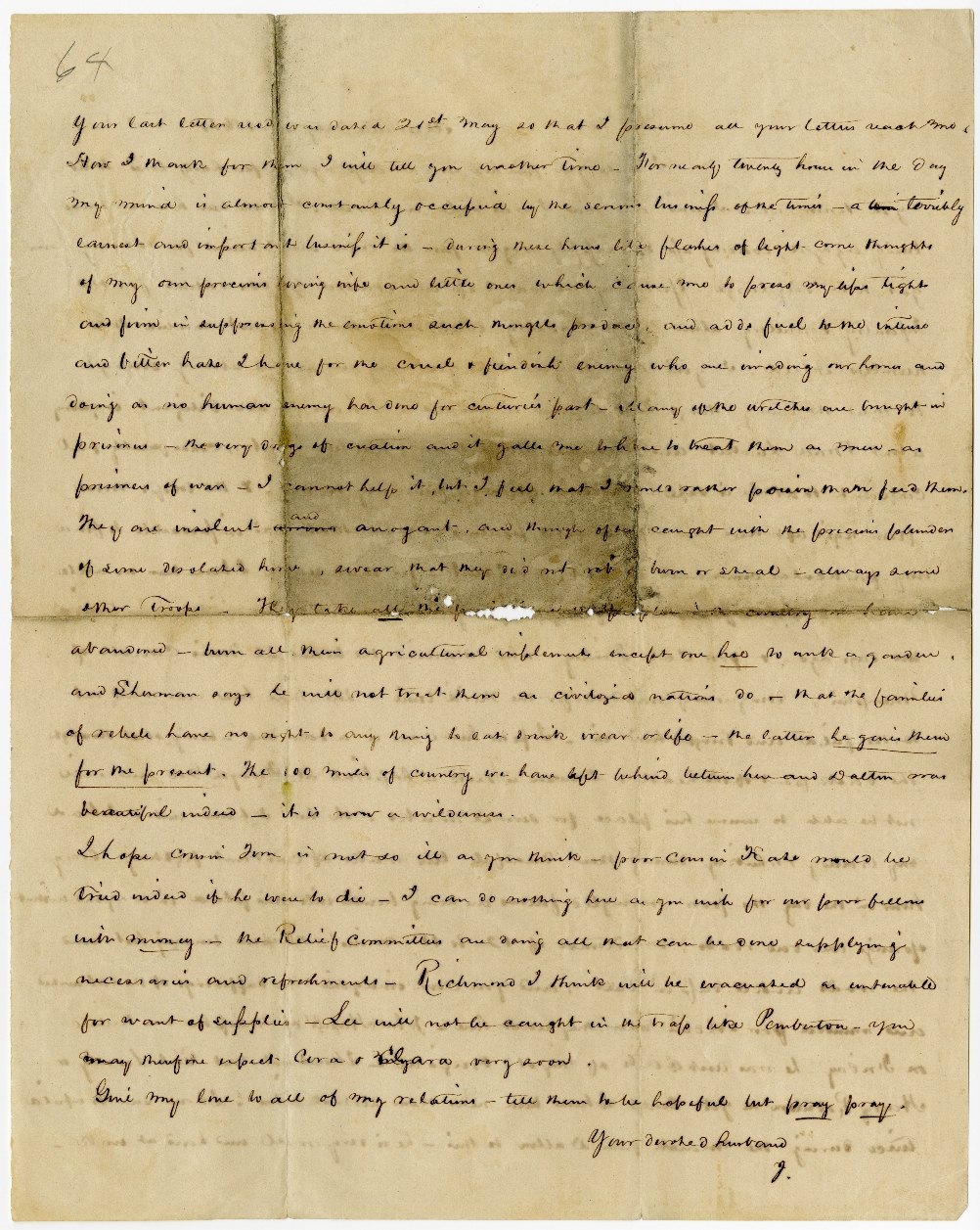 I wrote you from here, several days ago, a few harty lines to let you know where I was and that I was safe and well. I have been here ever since busily engaged loading up the supply wagons from the cars with rations for the army, now got to be very large. Yesterday we loaded up and started 90,000 rations for the infantry and artillery alone. The cavalry draw theirs here. Do not mention the numbers erased.  I give them to you that you may see me as strong enough to meet the enemy though he is superior in numbers.  I have made diligent inquiry abut Brad Lucket and cannot learn that he has been hurt, consequently feel confident that he is safe. Our lines change from day to day & the troops move from right left and center, so reversed positions so often that it is impossible to find any particular command except by accident. For that reason I have been unable to see Brad. Joe Parks of my company, brother to Mrs. Dandrick, was killed two days ago & poor Col. Finley who married the beautiful Miss Carroll of Memphis, dangerously wounded for the third time. She was here and went out to the field and brought him in. I fear his case is a bad one, being shot through the back part of the head. Dawson is sick in hospital at Forsyth Ga. and will not be able to resume his place for several weeks. Oh how I have wished I had my brandy & whiskey during these dreadful two weeks of constant fighting – every hour of the day the poor mangled fellows are being hauled into this place in wagons without springs over bad roads, a distance of 12 to 15 miles, the sun burning hot and the roads ankle deep in dust, and you can imagine the sufferings of the exhausted and wounded poor soldiers when they reach here.  John Harris of Memphis was killed on Friday – he was Asst. A A G of my old brigade.  I have not met General Loring or Henry Robertson as yet though I have been near them several times. I have seen Wafield twice during the march from Dalton to here. He is very well and hard at work.

Your last letter recd was dated 21 st May so that I presume all your letters reach me.  How I thank for them I will tell you another time.  For nearly twenty hours in the day my mind is almost constantly occupied by the serious business of the times – a terribly earnest and important business it is – during these hours like flashes of light come thoughts of my own precious loving wife and little ones which cause me to press my lips tight and firm in suppressing the emotions such thoughts produce, and adds fuel to the intense and bitter hate I have for the cruel & fiendish enemy who are invading our home and doing as ho human enemy has done for centuries past. Many of the wretches are brought in prisoners – the very dregs of creation and it galls me to have to treat them as men, as prisoners of war.  I cannot help it, but I feel that I would rather poison than feed them. They are insolent and though often caught with the precious plunder of some desolated home, swear that they did not rob burn or steal, always some other troops. They take all the [illegible] in the country [?] abandoned – burn all their agricultural implements except one how to work a garden, and Sherman says he will not treat them as civilized nations do, that the families of rebels have no right to any thing to eat drink wear or life, the latter he gives them for the present. The 100 miles of country we have left behind between here and Dalton was beautiful indeed – it is now a wilderness.
I hope Cousin Tom is not so ill as you think, poor cousin Kate would be tried indeed if he were to die.  I can do nothing here as you wish for our poor fellows with money – the Relief Committee are doing all that can be done supplying necessaries and refreshments. Richmond I think will be evacuated as untenable for want of supplies – Lee will not be caught in a trap like Pemberton. You may therefore expect Cora or Clara very soon.
Give my love to all of my relations – tell them to be hopeful but pray pray.
Your devoted husband,
J