20 June 1864: “I have written in the breastworks, in a broiling tropical sun; pardon errors if you please.” 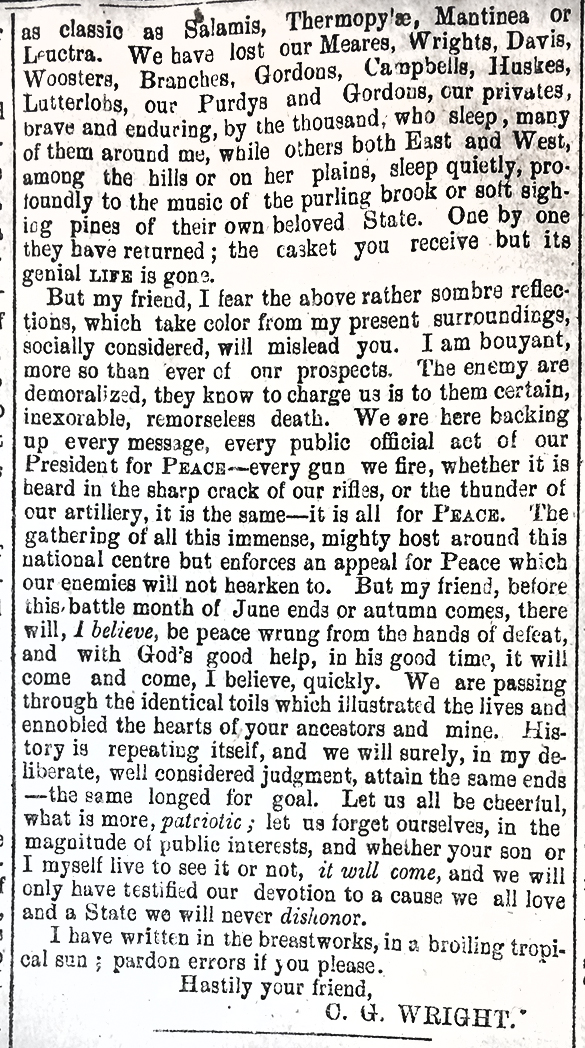 The following letter has been received from Major Wright, by a gentleman in this town, and as it contains many matters of interest, has been kindly placed by him in our hands, with permission for its publication :—

My Dear Sir : I know the interest you felt in the welfare and reputation of the late Alex D. Moore, Colonel of this regiment—not merely as a connection of your family, but his qualities as a soldier. Cognizant, perhaps more than all others of the particulars of his death, I have thought it appropriate to furnish them to you and to his deeply afflicted family, with whom I communicated at once by the telegraph.

Friday morning at daylight, June the 3rd, the enemy opened his fire upon us from his right to his left. —We soon ascertained that it was not a mere demonstration upon any particular point of supposed weakness, but the actual carrying out of a well digested, well-considered plan of attack.  The fire ran down our lines from left to right like the keys of a piano, and to the sharp crack of our rifles was added the roar of artillery as it joined in the wild music of the hour—the carnival of death.  The — battalion of Lt. Col. Eglison’s Virginia Infantry, immediately on our right, gave way and yielded with scarcely more than a show of resistance, and their flag was captured, as also a piece of artillery in their rear. Our right flank was thus exposed, but fortunately Finnegan’s Florida troops were immediately in reserve and they dashed up in gallant style, retook the battery, and aided by the flank fire of the right wing of the 66th regiment, captured and slaughtered the whole charging force.  They were Virginia Pierpont troops under an Ohio Colonel.  They came up in better spirit than that which seemed to an imate the bosoms of those who were put there to oppose them, and but for the prompt response of the reserve, and the deadly fire of this regiment, serious results might have followed;—as it was, they fell before us like autumn leaves, and the crest of the hill is now darkened with the Yankee dead.  Before the 17th regiment, the enemy met a similar repulse and there they still lie festering in their wounds.

The prisoners captured by the 17th N. C., say that theirs was the only one of 16 regiments that could be forced to the charge, the others incontinently flying or refusing to be led to the slaughter. That Grant had charged them so much to the death music of our Confederate rifles, that their prestige was gone and they were demoralized. They were glad they were prisoners, &c.

This was our status, our situation, every thing quiet along the lines, save the congratulations which follow success, when Col. Moore came to my wing and commenced one of those gay, pleasant conference which characterized our daily intercourse.  We were talking and laughing together, when he changed his position to give an order or take an observation, his breast just above the parapet, whet he reeled heavily and fell expiring into my arms from the remorseless bullet of a Yankee sharp shooter.  He turned his eyes upon me; they spoke, though his lips moved not, and I knew from that look which I can never forget, that death had done his work, and in less than one minute, the soul of the brave, generous, chivalrous Moore had sprung from the service of his country to his God.  He was much my junior–I never knew him till the organization of this regiment—but since Aug. 3rd, 1863, we nave been daily thrown, together and our confidences and social relations have been both pleasant and unreserved.  His was a military education, and to the energies of a strong and well ordered mind, he added the love and enthusiasms for his profession, and there were precious few men in whose judgment I would more readily confide. Being his senior, he was daily in the habit of consulting or rather confering with me upon matters for the good and esprit du corps of our command, and this gave me opportunities to know whereof I speak.  I have never been long deceived in my estimates of my associates, and in the retrospect which this sad event, this calamity calls up, I can say I never knew a braver, more chivalrous man.  Of delicate and refined sensibilities himself, he accorded them to others, and to the stern quality of the soldier, he brought the charm of social converse, heightened as it was by education and a love of a chaste and enobling literature.  I never knew him to utter a profane word or enjoy an impure sentiment coming from any one, however intimate.  He had endeared himself to this regiment, and when I announced his death, there was sorrow in all our lines—and when I felt the warm pressure of his hand as he struggled with the grim monster Death, wiped the death damp gathering on his brow, and closed his eyes in death, I could without undue weakness or unmanly emotion join in the heart-moving sympathy of David for the loss of his friend—”I am distressed for thee, my brother Jonathan, very pleasant hast thou been unto me.”  He was not merely brave, but he was even gay in battle. I never saw but one like him in this regard, and that is Adolphos Munroe, of Blades County, his Sergt. Major, whom the Col. thought as brave a lad as he ever saw, and who, in a night assault the next evening, was shut in the head by a minnie ball, lodging in his jaw and inflicting a most painful, if not dangerous wound.

You heard of the assault of Thursday night on the 8th N. C. regiment, commanded by the brave, amiable and intrepid Lt. Col. Jno. R. Murchison, of Cumberland County.  I have never gotten the particulars, only that from a gap or interval on his left, his flank was turned and his regiment, weakened by long and arduous services, could not withstand the shock, and in rallying his broken line, amid the roar of artillery, he too yielded up his brave life ‘to his country and his soul to God.

The soil of the Old Dominion is enriched with North Carolina blood. Her battle-fields have been rendered as classic as Salamis, Thermopylae, Mantinea or Leuctra. We have lost our Meares, Wrights, Davis, Woosters, Branches, Gordons, Campbells, Huskes, Lutterlobs, our Purdys and Gordons, our privates, brave and enduring, by the thousand, who sleep, many of them around me, while others both East and West, among the hills or on her plains, sleep quietly, profoundly to the music of the purling brook or soft sighing pines of their own beloved State. One by one they have returned ; the casket you receive but its genial LIFE is gone.

But my friend, I fear the above rather sombre reflections, which take color from my present surroundings, socially considered, will mislead you.  I am bouyant, more so than ever of our prospects.  The enemy are demoralized, they know to charge no is to them certain, inexorable, remorseless death.  We are here backing up every message, every public official act of our President for PEACE—every gun we fire, whether it is heard in the sharp crack of our rifles, or the thunder of our artillery, it is the same—it is all for PEACE. The gathering of all this immense, mighty host around this national centre but enforces an appeal for Peace which our enemies will not hearken to.  But my friend, before this battle month of June ends or autumn comes, there will, I believe, be peace wrung from the hands of defeat, and with God’s good help, in his good time, it will come and come, I believe, quickly.  We are passing through the identical toils which illustrated the lives and ennobled the hearts of your ancestors and mine.  History is repeating itself, and we will surely, in my deliberate, well considered judgment, attain the same ends—the same longed for goal. Let us all be cheerful, what is more, patriotic; let us forget ourselves, in the magnitude of public interests, and whether your son or I myself live to see it or not, it will come, and we will only have testified our devotion to a cause we all love and a State we will never dishonor.

I have written in the breastworks, in a broiling tropical sun; pardon errors if you please.