22 June 1864: “Now people are terribly in earnest. They want the truth. They want nothing more and nothing less.” 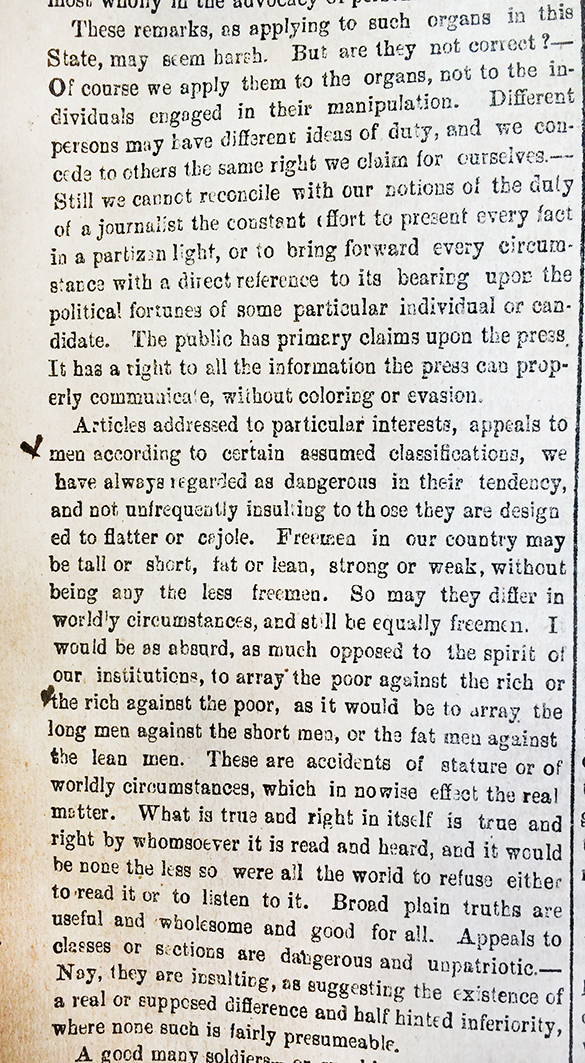 A FRIEND recently remarked to us upon the terrible sameness of the newspapers. From the first to the last column the topic was war.  And he was right.  It is war.  War is in all men’s thoughts and in all men’s mouths.  If any one enquires the news, it is news of the war that he means.  The first part of a paper that is read, is the telegraphic column with dispatches from the battle-field. At the beginning men loved the excitement—they delighted in rumours.  Now people are terribly in earnest.  They want the truth.  They want nothing more and nothing less.  Under those circumstances it appears to us to be the duty of the press to seek that first.  Reports it must give, for the telegraph will bring reports, and rumours, more or less reliable will be received from other quarters.  To sift these rumours, to weigh testimony and to give an intelligent and intelligible resume of occurrences, and of the existing position of affairs, is perhaps the most acceptable service that a journal can render to its readers.

As in matters of news, so in matter of opinion, men seek or ought to seek reality, plain speaking, coolness and candor.  This is no time tor “pitching in,” or pitching out–for making partizan appeals for this man or against that man.  It is no time for appealing to any prejudice, nor for addressing any particular class or calling of men.  A paper is published for the whole community.  Its existence depends upon the supposition that it is so, and that its aim is the public good, for upon no other ground could the exemption of even the few persons engaged in carrying it on be asked for or justified.  Most honestly do we doubt the moral right of Congress to exempt any parties for the purpose of carrying on mere personal organs, engaged almost wholly in the advocacy of personal claims.

These remarks, as applying to such organs in this State, may seem harsh.  But are they correct?—Of course we apply them to the organs, not to the individuals engaged in their manipulation. Different persons may have different ideas of duty, and we concede to others the same right we claim for ourselves.—Still we can not reconcile with our notions of the duty of a journalist the constant effort to present every fact in a partizan light, or to bring forward every circumstance with a direct reference to its bearing upon the political fortunes of some particular individual or candidate.  The public has primary claims upon the press.  It has a right to all the information the press can properly communicate, without coloring or evasion.

Articles addressed to particular interest, appeals to men according to certain assumed classifications, we have always regarded as dangerous in their tendency, and not unfrequently insulting to those they are designed to flatter or cajole.  Freemen in our country may be tall or short, fat or lean, strong or weak, without being any the less freemen. So may they differ in worldly circumstances, and still be equally freemen.  It would be as absurd, as much opposed to the spirit of our institutions, to array the poor against the rich or the rich against the poor, as it would be to array the long men against the short men, or the fat men against the lean men. These are accidents of stature or or worldly circumstances, which in nowise effect the real matter.  What is true and right in itself is true and right by whomsoever it is read and heard, and it would be none the less so were all the world to refuse either to read it or to listen to it. Broad plain truths are useful and wholesome and good for all.  Appeals to classes or sections are dangerous and unpatriotic.—Nay they are insulting, as suggesting the existence of a real or supposed difference and half hinted inferiority, where none such is fairly presumeable.

A good many soldiers—or, speaking more accurately, a good many citizens now in military service, take our paper.  Would that we could publish it at prices that it would render it convenient for more to do so.  Some of our army subscribers are officers ; others, and the large majority, are not.  They are all citizens.  What is for the good of the country is for their good ; what is opposed to the good of the country is opposed to their good.  And, indeed, the converse of this proposition may be regarded as pretty applicable;—the good of the soldiers is the good of the country and the evil of the soldiers is the evil of the country, since the best blood of the whole country is in the army.  Is an army constituted like that of the Confederacy to be regarded or addressed as in any way differing from the country at large of which it forms so important a part?  We think not. We certainly have never supposed so, and have never thought of writing appeals to soldiers as such, upon political matters, and we have regretted to see such appeals coming from any quarter.  Especially have we regretted to see any appeals calculated to awaken prejudices or create antagonisms between citizens holding commissions and citizens not holding commissions.  We all know that all cannot be officers, as we also know that the brunt of battle must fall upon the rank and file, while at the same time the history of the war shows how freely the officers have exposed themselves and offered up their lives for their country upon every occasion. Perfect harmony between officers and men is very essential to the efficiency and well-being of the army, and is, of course, of vital importance to the success of the cause which all are battling for. That anything tending to weaken this harmony, or to create distrusts between persons occupying different positions in the service, can only be productive of evil, every man of common sense will see for himself.

Now, we regret to notice that there is an effort to create such distrust in the ranks of our army—to set the soldiers against the officers and the officers against those who are not officers—to hold out the idea that one candidate for Governor is the friend of the soldier—the private—and that the other is not.  To insinuate that because A. B., who happens to be an officer, chooses to support Gov. VANCE, therefore C. D., who happens to be a private, should waive his own private judgment, and out of blind spite against his officer support Mr. HOLDEN.  We think that the worse than folly of this thing requires only to be pointed out to be condemned.  We will not insult the common sense of any of our readers in or out of the army, whether officers or privates, by arguing such a thing.  Yet such a course of electioneering is carried on, directly and indirectly ; and, we regret to say, not without its effect.— Mr. HOLDEN is represented as the exclusive friend of the private soldier, and a prejudice as between soldiers and officers is sought to be evoked in his behalf. If as package of Standards or Progresses does not reach it destination, it is charged to the tyranny of the officers or the Confederate Government, or some such thing; and this in face of the fact that every paper in the State and out of it receives from its subscribers in the army, and, for that matter out of the army, the same kind of complaints.

We are making no appeal for Governor VANCE nor against Mr. HOLDEN. We are simply objecting to this style of electioneering. It is wrong. It is unjust. It is unpatriotic. It ought not to be resorted to.  We would condemn it, no matter by which side it might happen to be used. It is uncandid.  Both these aspirants for public favor are desirous of the votes of the soldiers and of all others. Let them seek such votes on fair grounds. We will not argue that Governor VANCE is the exclusive friend of the private soldier, although be himself was a private soldier and entered the army as such, and his competitor never did. We will not call in question, Mr. HOLDEN’S reasons for not doing so.  No doubt they were satisfactory to himself.  But in the course of the two men, there is nothing to show that Governor VANCE has neglected the interests of the soldiers, but much to show that he has remembered them.  If Mr. HOLDEN has made any record in this respect, it has been confined to words, and some of these words have appeared to us to be dangerous and unpatriotic.

We have from time to time expressed our preference for Gov. VANCE, and given our reasons for this preference. If these reasons have any force they derive it from considerations apart from anything like appeals to the prejudice of any class, section or party. They are based upon grounds of a public and general character, in which all officers, soldiers and civilians are alike interested. We are sick of appeals and demagogueism.  We should think that the people would also be by this time.  Now, at least, men and measures, candidates and their acts, should be looked at with clear eyes and unwarped judgments.