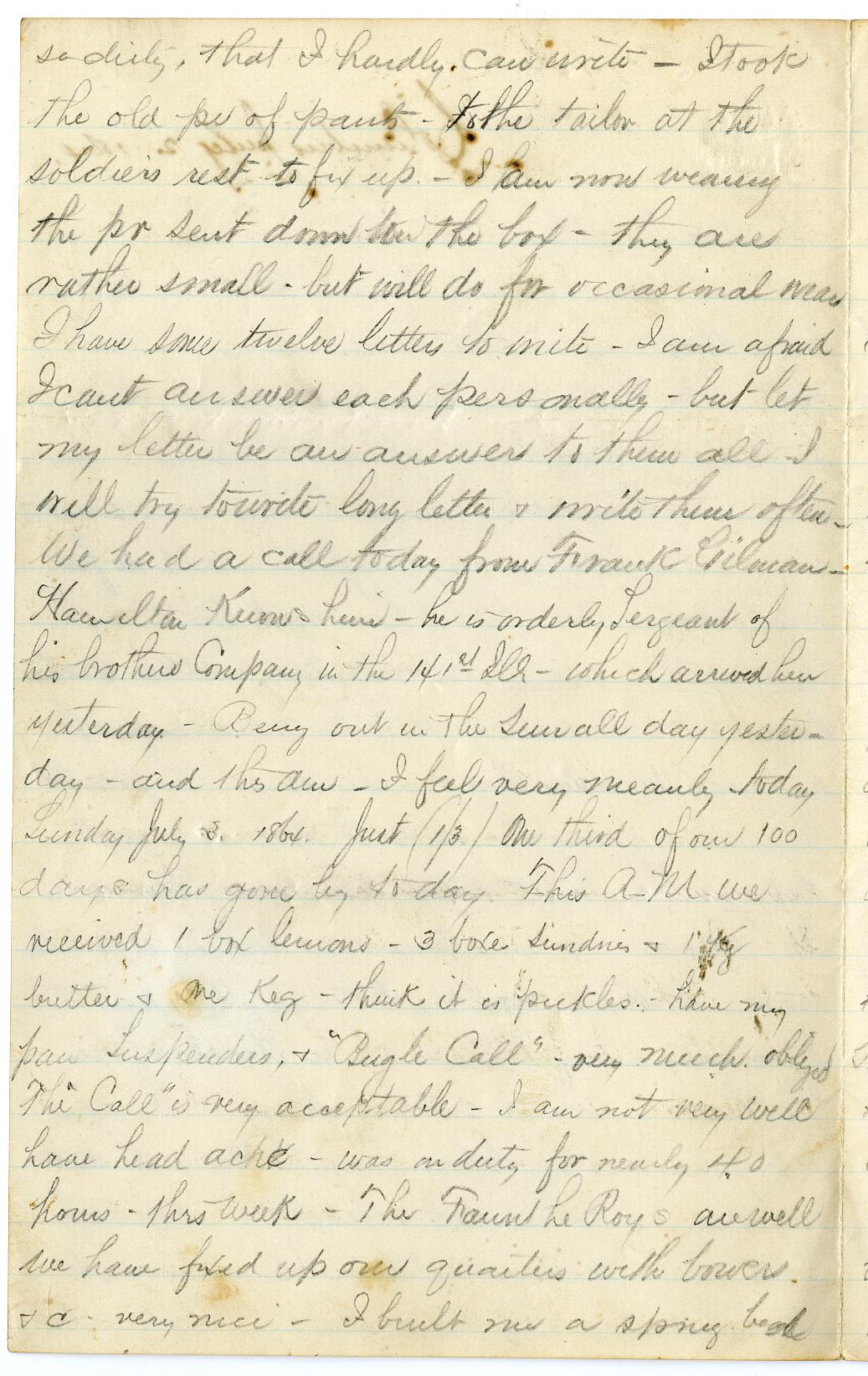 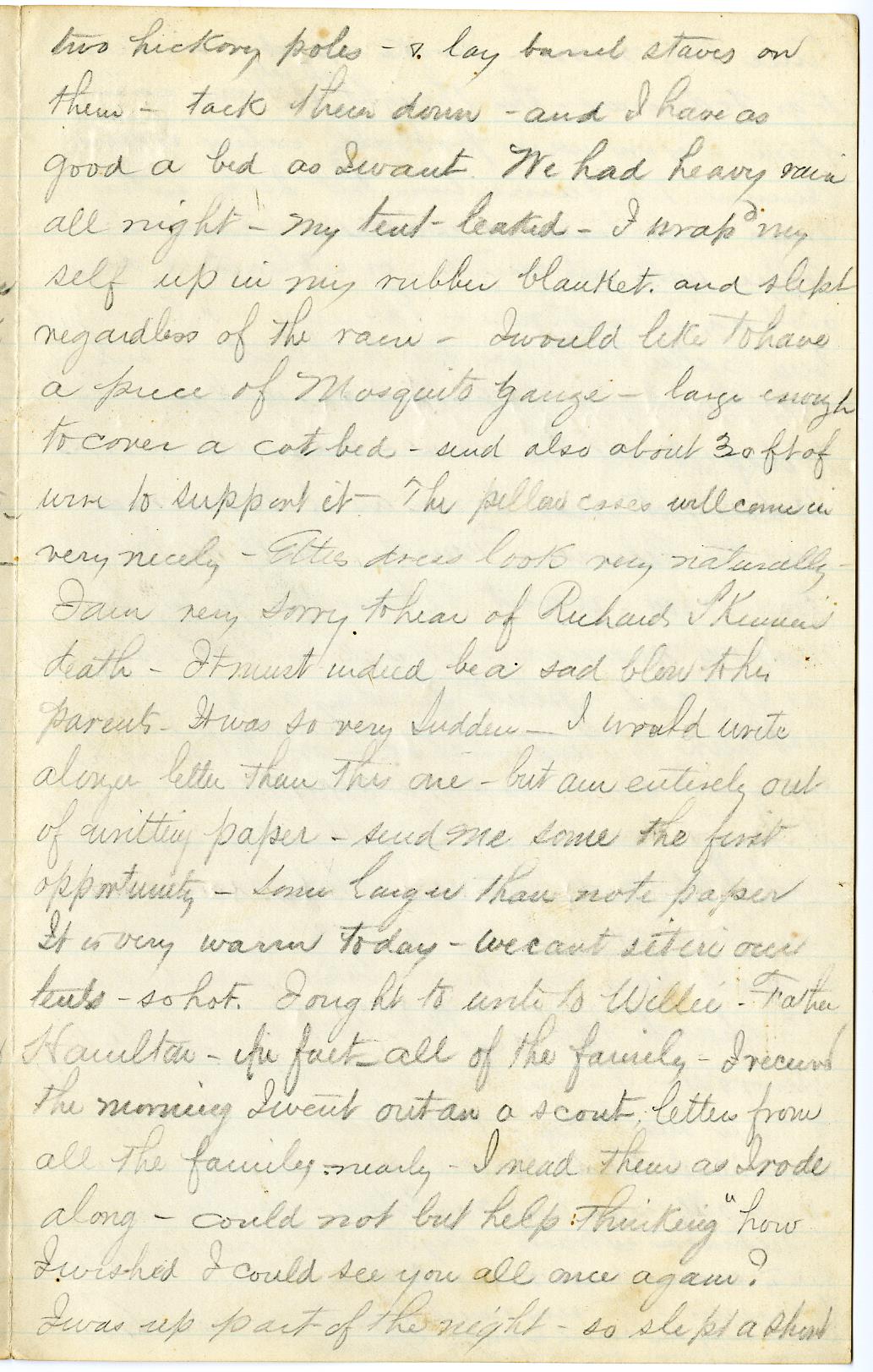 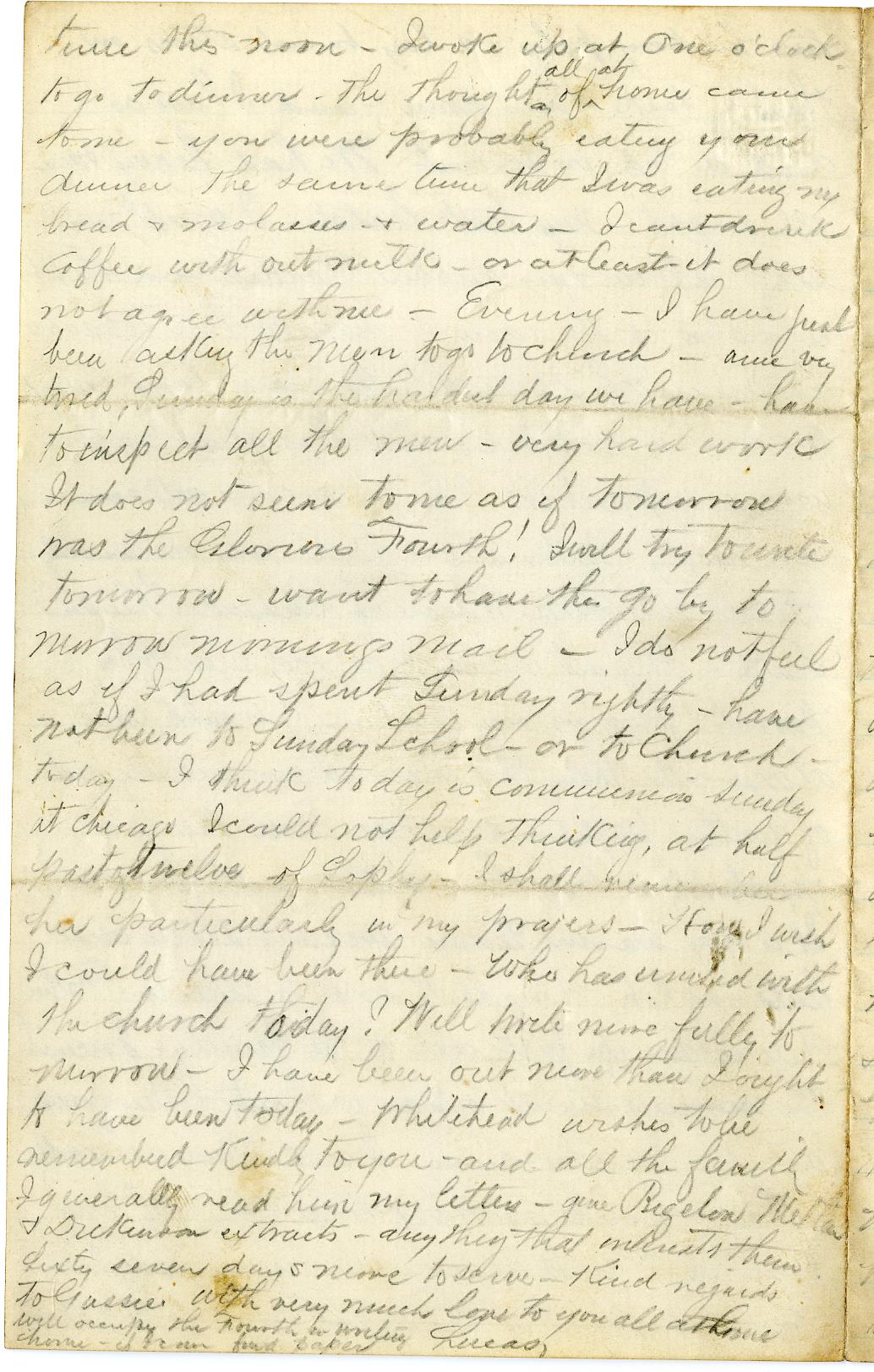 [Letter continued from 2 July 1864.]
Sunday July 3, 1864.  Just (1/3) one third of our 100 days has gone by today. This AM we received 1 box lemons- 3 boxes sundries, and 1 pkg butter + one keg – think it is pickles. have my pair of suspenders, + “Bugle Call” – very much obliged. This “Call” is very acceptable – I am not very well – have head ache – was on duty for nearly 40 hours this week – The Faunt LeRoys are well. we have fixed up our quarters with bowers, etc – very nice – I built me a spring bed two hickory poles – lay barrel staves on them – tack them down – and I have as good a bed as I want. We had heavy rain all night – my tent leaked – I wraped myself up in my rubber blanket and slept regardless of the rain – I would like to have a piece of Mosquito gauze – large enough to cover a cot bed – send also about 30 ft of wire to support it – The pillow cases will come in very nicely – [?] dress looks very naturally – I am very sorry to hear of Richard [?] death – It must indeed be a sad blow to his parents – It was so very sudden – I would write a longer letter than this on – but am entirely out of writing paper – send me some the first opportunity – some larger than note paper. It is very warm today – we cant sit in our tents – so hot. I ought to write to Willie – Father Hamilton – in fact – all of the family – I received the morning I went out as a scout, letter from all the family nearly – I read them as I rode along – could not but help thinking “how I wished I could see you all once again.” I was up part of the night – so slept a short time this noon – I woke up at one o’clock to go to dinner – the thought of all at home came to me – you were probably eating your dinner the same time that I was eating my bread + molasses + water – I can’t drink coffee without milk – or at least does not agree with me – Evening – I have just been asking the men to go to church – am very tired Sunday is the hardest day we have – have to inspect all the men – very hard work. It does not seem to me as if tomorrow was the Glorious Fourth! I will try to write tomorrow – want to have the go by tomorrow morning mail – I do not feel as if I had spent Sunday rightly – have not been to Sunday School – or to church today – I think today is communion Sunday at in Chicago I could not help thinking, at half past twelve of [?] – I shall remember her particularly in my prayers – How I wish I could have been there – who has united with the church today? Will write more fully tomorrow – I have been out more than I ought to have been today – Whitehead wishes to be remembered kindly to you – and all the family. I generally read him my letters – give Bigelow Metlar + Dickinson extracts – anything that interests them sixty seven days more to serve – kind regards to Gussie with very much love to you all at home
will occupy the Fourth writing home – if I can find paper
Lucas
This entry was posted in Southern Historical Collection. Bookmark the permalink.