Posted on 5 Jul ’14 by Rebecca Williams

Item Description: Letter dated 5 July 1864, written by Sam R. Locklear. He writes to his mother and discusses the fighting occurring near Petersburg. He also describes the gruesome death of one of his fellow soldiers. 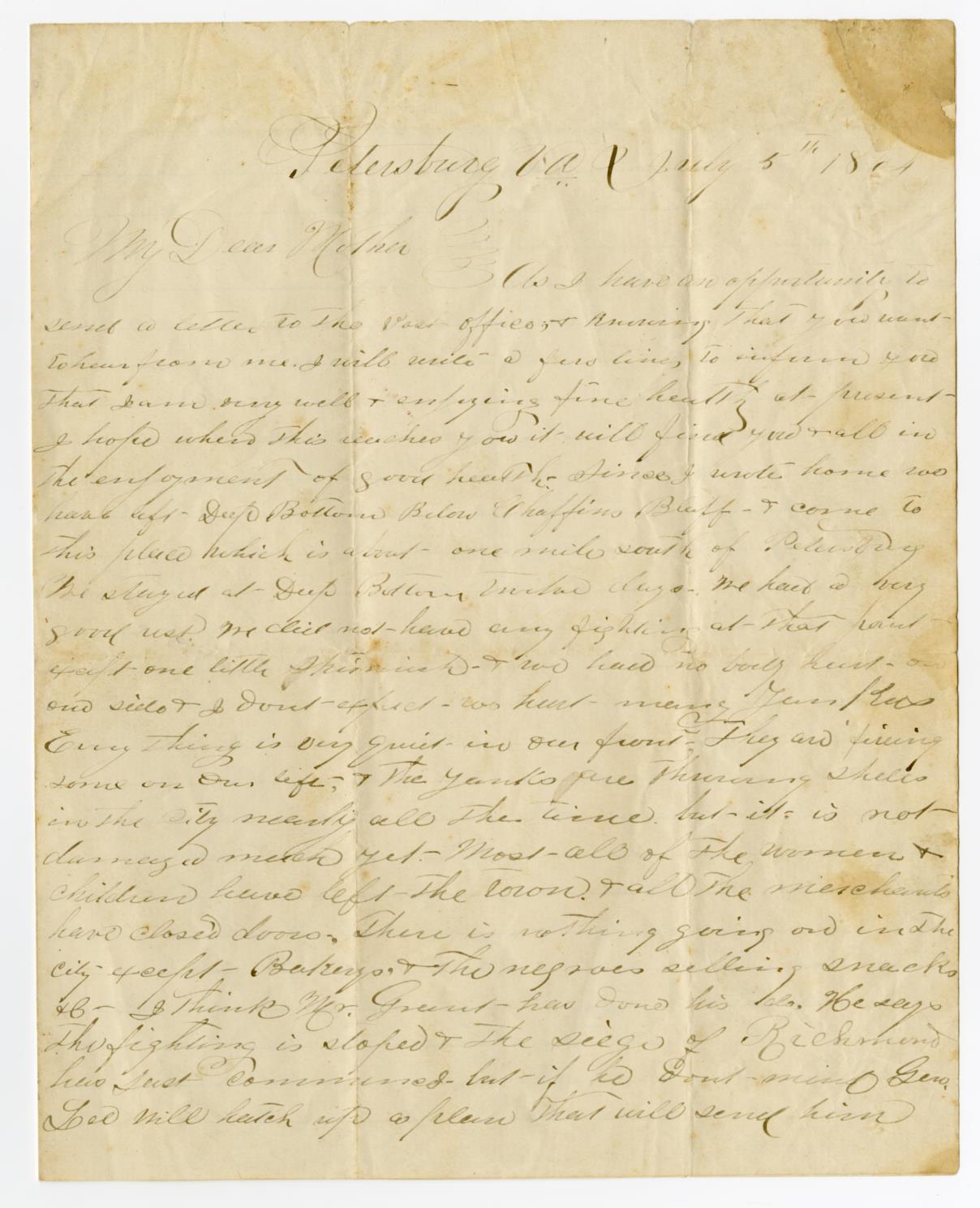 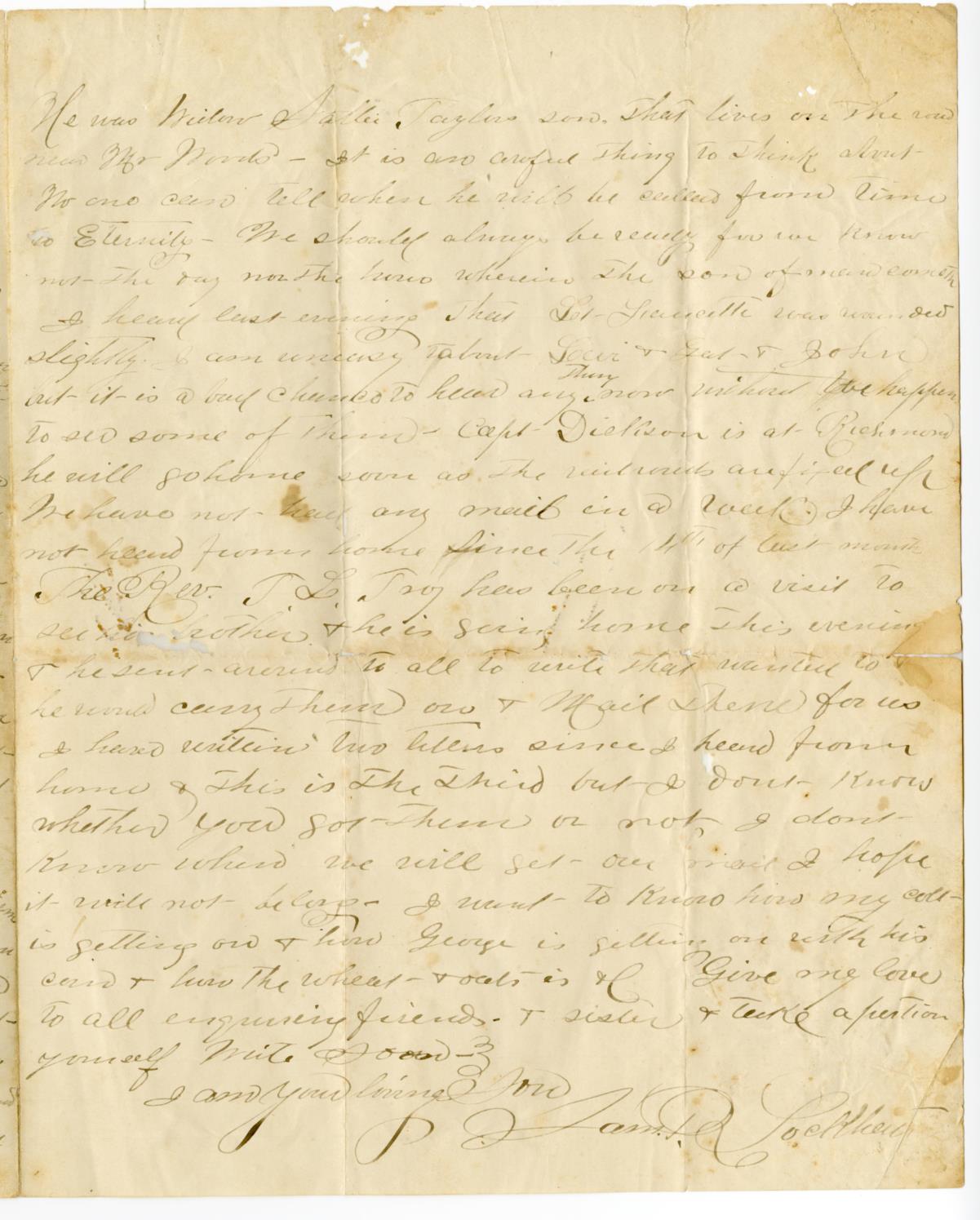 As I have an opportunity to send a letter to the Post office + knowing that you want to hear from me, I will write a few lines to inform you that I am very well + enjoying fine health at present. I hope when this reaches you it will find you + all in the enjoyment of good health. Since I wrote home we have left Deep Bottom Below Chaffins Bluff- I come to this place which is about one mile south of Petersburg. We stayed at Deep Bottom twelve days. We had a very good rest. We did not have any fighting at that point except one little skirmish + we had no body hurt on our sides + I don’t expect we hurt many Yankees. Everything is very quiet in our front. They are firing some on our left+ the Yanks are throwing shells in the city recently all the time but it is not damaged much yet. Most all of the women + children heave left the town + all the merchants have closed doors. There is nothing going on in the city except Bakery, + the negroes selling snacks. I think Mr Grant has done his do. He says the fighting is stopped + the siege of Richmond has just commenced but if he don’t mind Gen Lee will hatch up a plan that will send him traveling down the Peninsula. The Richmond papers of yesterday give account of Gen. Mosby cavalry (rebels) tearing up ten miles of the Baltimore & Ohio Rail Road between Martinsburg + Harpers Ferry + Genl Early corps would cross the Potomac yesterday + you see if Mr Grant don’t mind he will have something to do nearer home. Grant’s men are committing some of the most desperate outrages I ever heard of. When they made that ? on the Richmond + Danville R.R. They would plunder the peoples houses + tear up every thing + carry off every thing that was nice. They took the young Ladies breast pins + finger rings + if they refused to take them off + give them up they would take them by force. They stole all the negroes that they could but our forces captured a portion of the raiders + about seven hundred stolen negroes. I think all all such men aught to be killed. They aught to be hung as soon as caught. The Yankees are ceasing Muster guns in front of Petersburg a muster throws shells strait up + let them fall in our ranks. They do a good deal of damage when they fall in the right place. They do not hit our lines often with them. There was one fell on George Taylor’s breast + went clear through him + went in the ground + busted + blood kind clear over the opposite side of the ?. He was asleep when it fell on him.

He was Widow Sallie Taylor’s son that lives on the road near Mr Woods– it is an awful thing to think about. No one can tell when he will be called from time to Eternity- We should always be ready for we know not the day month hour wherein the son of man cometh. I heard last evening that col Faucette was wounded slightly I am uneasy about ? + Genl + John but it is a bad chance to hear any They now ? We happen to see some of them- Capt Diellson is at Richmond he will go home soon as the railroads are fixed up. We have not had any mail in a week. I have not heard from home since the 14th of last month. The Rev. T.L. Troy has been on a visit to see his brother + he is going home this evening + he sent around to all to write that wanted to + he would carry them on + mail them for us. I have written two letters since I heard from home + this is the third but I don’t know whether you got them or not. I don’t know when we will get our mail I hope it will not be long- I want to know how my colt is getting on + how George is getting on with his corn + how the wheat + oats is etc. Give my love to all inquiring friends + sister + take a portion yourself write soon–

I am your loving son