7 July 1864: “The evidences of the existence of a secret organization of the most dangerous and unholy character . . .” 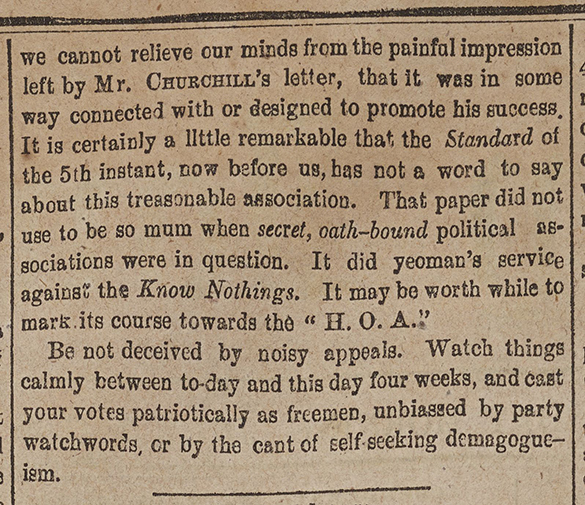 The Elections in this State.

On this day four weeks the people of North Carolina will be called upon to elect a Governor, Members of the Senate and House of Commons and Sheriffs.

Contrary to our wishes, and in spite of our earnest remonstrance, the State is the scene of a bitter personal and political contest, and her people are agitated by the passions incident to an excited canvass, at the same time that they are warring for existence itself, and struggling in the throes through which all must pass on their way to independence.

Out of evil perhaps good may come, and we can cheerfully welcome the good as some compensation for the evil, although we could never assent to the doctrine or practice of doing evil that good may come of it.—  However the present contest for Governor may terminate, to Mr. W. W. HOLDEN, as he already claims the honor of founding the “Conservative” party in North Carolina, must hereafter be accorded the credit of breaking up that proscriptive organization. It is ail in his line, for does he not vaunt the power to “kill” as well as to make “alive?”

We may deprecate Mr. HOLDEN’S present candidacy and we do deprecate it, but we do this from motives and for reasons far above party.  Had party considerations alone governed us, or those with whom we concur in opinion, we would have hailed with pleasure this split in the party by which we have been meet bitterly denounced and ruthlessly proscribed. We would have done all that we could do to induce Mr. Holden to come out. But we did nothing of the kind. We declined running a candidate of our own before the split arising out of Mr. Holden’s candidacy. We have declined since making any move calculated to take advantage of that split. We declared ourselves at the first willing for the sake of peace and harmony to waive opposition to Governor Vance. Our position was so proclaimed and has since been loyally adhered to. So far as we are concerned, it will be adhered to to the end, and our suffrages will be given in accordance with our professions. We cannot speak for others, but we think this is the prevailing sentiment and determination in this section. Hard as Mr. HOLDEN has worked and good service as he has done in breaking up the “Conservative” party, we cannot yet reward his faithlessness to all parties by casting for him a full vote for Governor, or even giving him that half-vote which consists in withholding our vote from his competitor. We think the “Confederate” voters of this section will come forward openly and fully for Governor VANCE. It will make but little difference at any rate, in a party point of view, since Mr. HOLDEN has been the means of sowing the seeds of speedy dissolution in the “Conservative” ranks, and we have only to bide our time.  From a patriotic and unpolitical point of view the difference is great and inconceivable.  The election of Mr. HOLDEN could hardly fail to be productive of results deeply to be regretted.

We have been speaking as persons outside the pale of the “Conservative” party—as Southern Rights men only, or, as we have been kindly denominated, “Destructives.”  Of course to the members of the “Conservative” party, as party-men, we would not presume to give advice.  They can now see for themselves, and they will soon see more plainly the result of Mr. HOLDEN’S movements.  It is for them to judge and act, not for us to advise.  If their organization is interfered with and their councils distracted, they have Mr. HOLDEN and not us to thank for it.  We have often before stated our grounds for withholding opposition to Governor VANCE, and have defined the character and extent of the support we are prepared to give him, which does not commit us to his political position, and still less compromise him to ours.  To the baselessness and absurdity of the attacks upon Governor Vance because those who before opposed his election, are willing now to forbear that opposition, we have Mr. HOLDEN’S own recorded testimony, in his own words, copied from the Standard of the 7th October, 1863.  Mr. Holden then said : “If his [GOV. VANCE’s] enemies praise him, he cannot help it; and so long as his friends are satisfied with him, they should regard this praise as the moralist regards hypocrisy, as ‘the tribute which vice pays to virtue.” In the face of this, how can Mr. HOLDEN through the Standard, or his right hand organ and conch-blower of the Progress keep harping upon the fact that certain former opponents of Gov. VANCE now support him?

Unfortunately for Mr. Holden the proofs of his disaffection, not simply to the Confederate administration, but to the Confederate Government, are too strong to be met by a simple denial. Respectable members of the Legislature, of his own party, have certified, over their own signatures, that during the session of the Legislature last winter, he did make use of expressions that left and can leave no doubt of his feelings and position in this respect.  The evidences of the existence of a secret organization of a most dangerous and unholy character in this State, which we lay before our readers to-day, ought to give pause to all right-thinking and patriotic men.  We trust and believe that few have gone into it—very few, with any adequate idea of its real character, and we feel confident that its days are numbered, and that under the light of exposure its influence and power for evil will wither and shrink away.

We know nothing of this thing personally, although we heard talk of such a thing several weeks ago. We have no idea that Mr. HOLDEN is a member of it, but we cannot relieve our minds from the painful impression left by Mr. CHURCHILL’S letter, that it was in some way connected with or designed to promote his success.  It is certainly a little remarkable that the Standard of the 5th instant, now before us, has not a word to say about this treasonable association.  That paper did not use to be so mum when secret, oath-bound political associations were in question.  It did yeoman’s service against the Know Nothings. It may be worth while to mark its course towards the “H. O. A.”

Be not deceived by noisy appeals. Watch things calmly between to-day and this day four weeks, and cast your votes patriotically as freemen, unbiassed by party watchwords, or by the cant of self seeking demagogueism.