15 July 1864: “You spoke in your last letter about trying to get a negro boy to be your servant and I think of trying to bring him up to Chicago with you. Now what would we do with him if we had him?”

Posted on 15 Jul ’14 by Biff Hollingsworth 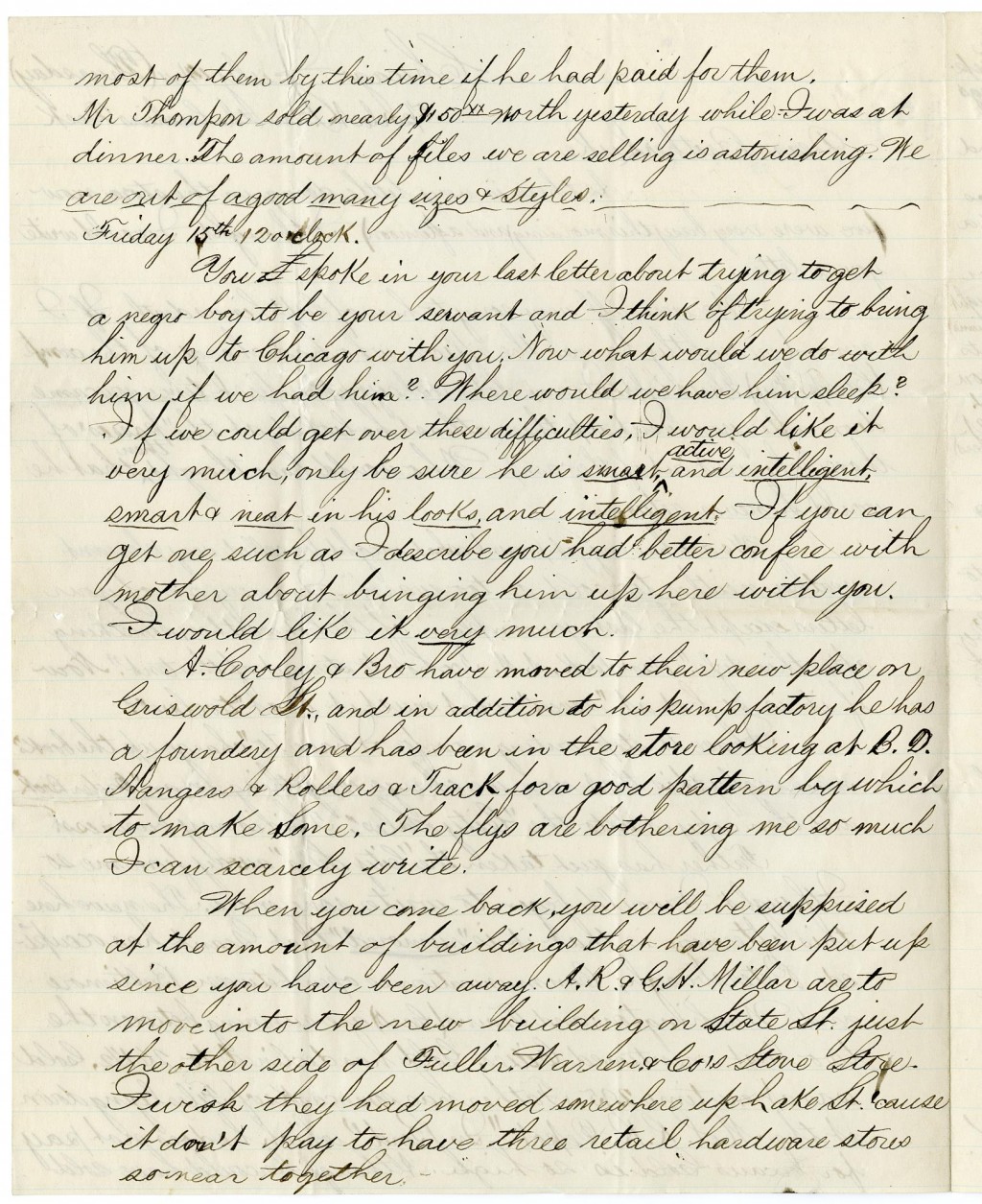 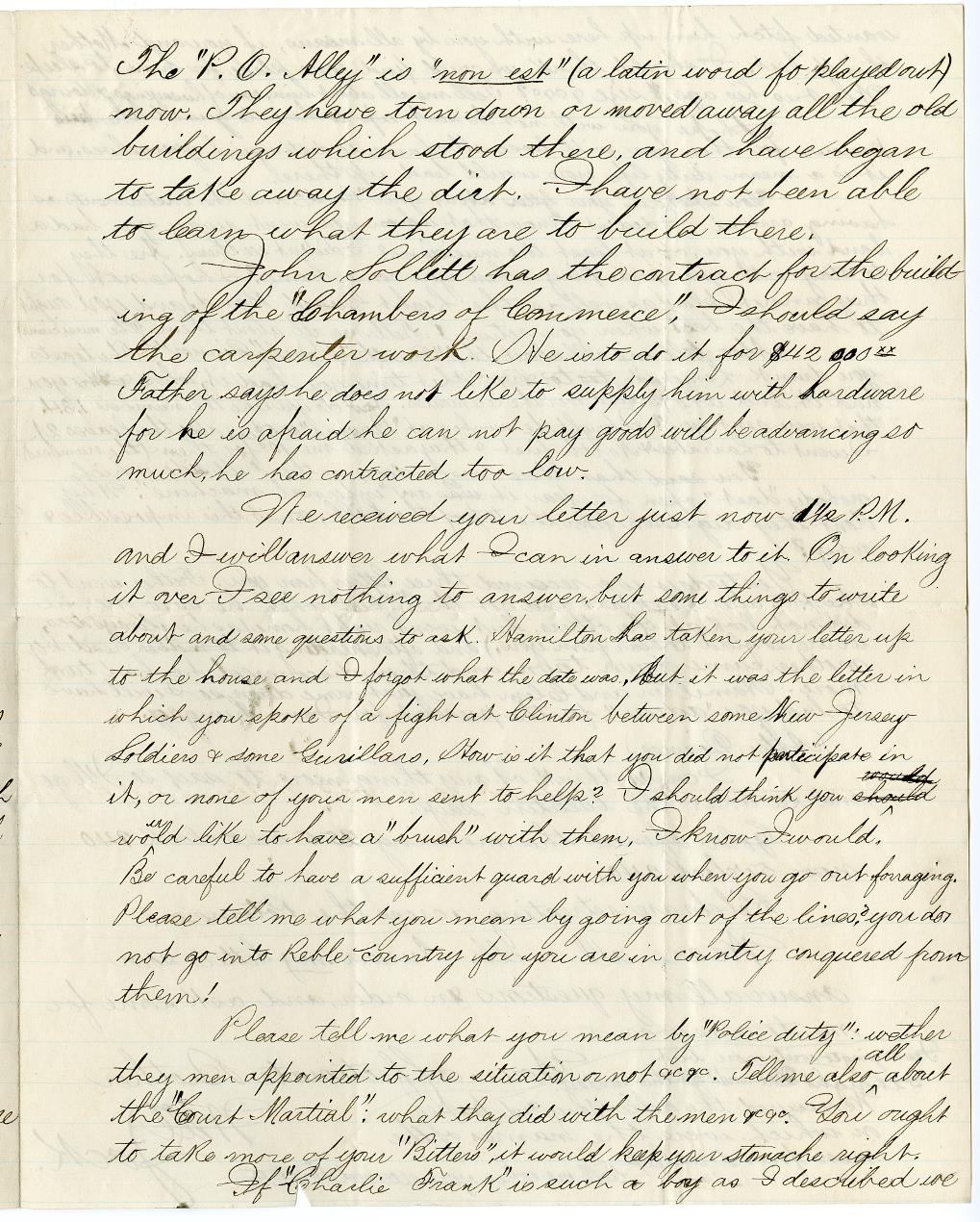 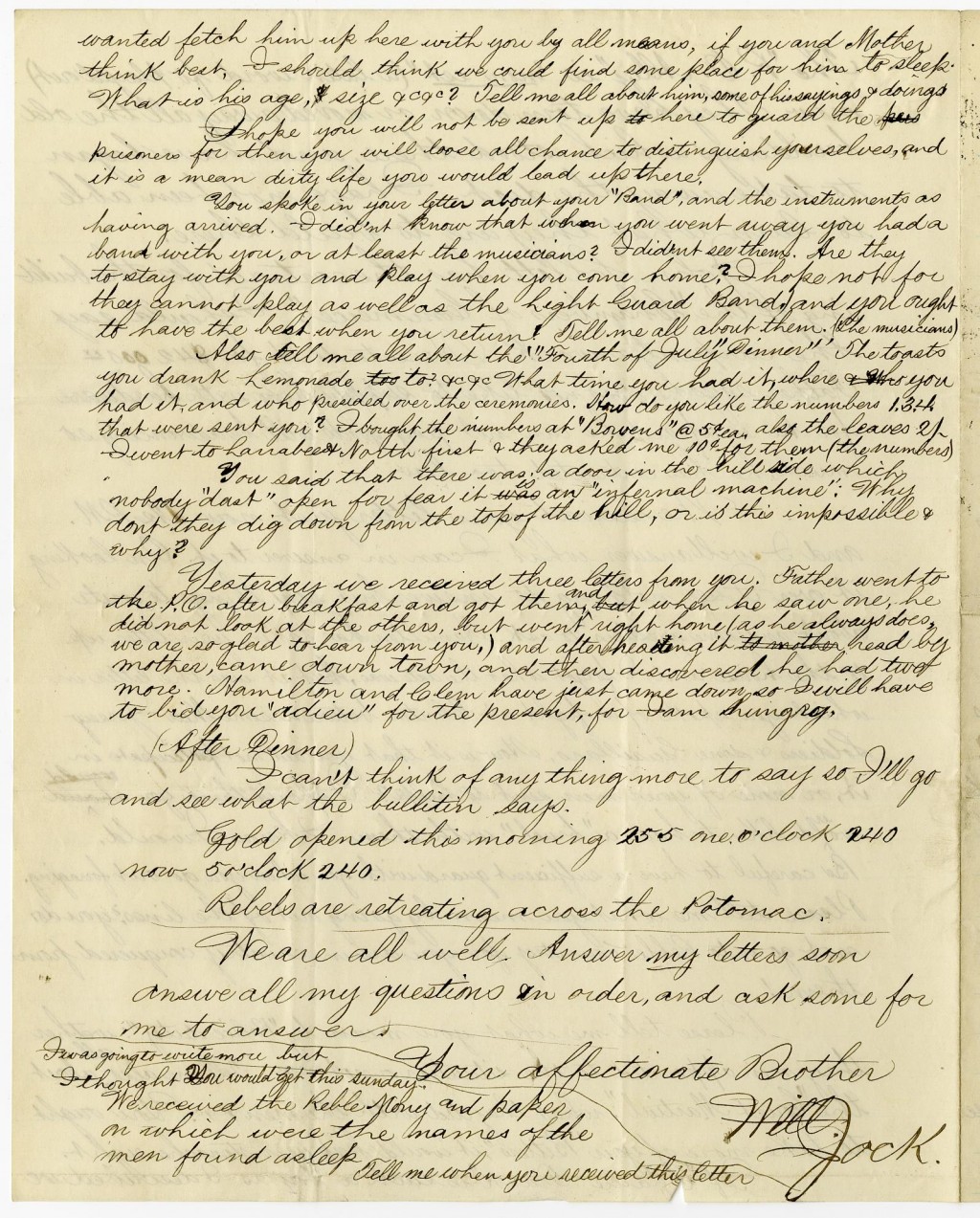 You spoke in your last letter about trying to get a negro boy to be your servant and I think of trying to bring him up to Chicago with you. Now what would we do with him if we had him? Where would we have him sleep? If we could get over these difficulties, I would like it very much, only be sure he is smart, active and intelligent, smart & neat in his looks, and intelligent. If you can get one such as I describe you had better confer with mother about bringing him up here with you. I would like it very much.

A. Cooley & Bro have moved to their new place on Griswold St. and in addition to his pump factory he has a foundary and has been in the store looking at B.D. Hangers & Rollers & Track for a good pattern by which to make some. The flys are bothering me so much I can scarcely write.

When you come back, you will be supprised at the amount of buildings that have been put up since you have been away. A.R & G.H. Millar are to move into the new building on State St. just the other side of Fuller, Warren & Co.’s Store. I wish they had moved somewhere up Lake St. ’cause it doesn’t pay to have three retail hardware stores so near together.

The “P.O. Alley” is “non est” (a latin word for played out) now. They have torn down or moved away all the old buildings which stood there, and have began to take away the dirt. I have not been able to learn what they are to build there.

John [] has the contract for the building of the “Chambers of Commerce,” I should say the carpenter work. He is to do it for $42,000xx. Father says he does not like to supply him with hardware for he is afraid he can not pay goods will be advancing so much, he has contracted too low.

We receive your letter just now 1 1/2 P.M. and I will answer what I can in answer to it. On looking it over I see nothing to answer but some things to write about and some questions to ask. Hamilton has taken your letter up to the house and I forgot what the date was, but it was the letter in which you spoke of a fight at Clinton between some New Jersey Soldiers & some Guerillas. How is it that you did not participate in it, or none of your men sent to help? I should think you would like to have a “brush” with them. I know I would.

Be careful to have a sufficient guard with you when you go out foraging. Please tell me what you mean by going out of the lines, you do not go into Reble country for you are in country conquered form them!

Please tell me what you mean by “Police duty”. wether they men appointed to the situation or not &c, &c. Tell me also all about the “Court Martial”. what they did with the men &c, &c. You ought to take more of your “Bitters,” it would keep your stomache right.

If “Charlie Frank” is such a boy as I described, we wanted fetch him up here with you by all means, if you and Mother think best. I should think we could find some place for him to sleep. What is his age, size, &c., &c.? Tell me all about him, some of his sayings & doings.

I hope you will not be sent up here to guard the prisoners for then you will loose all chance to distinguish yourselves, and it is mean dirty life you would lead up there.

You spoke in your letter about your “Band”, and the instruments as having arrived. I didn’t know that when you went away you had a band with you, or at least the musicians? I didn’t see them. Are they to stay with you and play when you come home? I hope not for they cannot play as well as the Light Guard Band, and you ought to have the best when you return. Tell me all about them (the musicians).

Also tell me all about the “Fourth of July Dinner”. The toasts you drank lemonade to, &c. &c. What time you had it, where you had it and who presided over the ceremonies. How do you like the numbers 1.3.4 that were sent you? I bought the numbers at “Borvens” @ 5c ea., also the leaves [?]. I went to Larrabee’s & North first & they asked me 10c for them (the numbers).

You said that there was a door in the hillside which nobody “dost” open for fear it is an “infernal machine.” Why don’t they dig down from the top of the hill, or is this impossible & why?

Yesterday we received three letters from you. Father went to the P.O. after breakfast and got them and when he saw one, he did not look at the others, but went right home (as he always does, we are so glad to hear from you) and after hearing it read by mother, came down town, and then discovered he had two more. Hamilton and Clem have just come down so I will have to bid you “adieu” for the present, for I am hungry.

I can’t think of anything more to say so I’ll go and see what the bulletin says.

Rebels are retreating across the Potomac.

We are all well. Answer my letters soon answer all my questions in order, and ask some for me to answer.

I was going to write you but I thought you would get this Sunday. We received the Reble money and paper on which were the names of the men found asleep. Tell me when you received the letter.